Nusrat has told journalists that festivities are inclusive in Bengal. 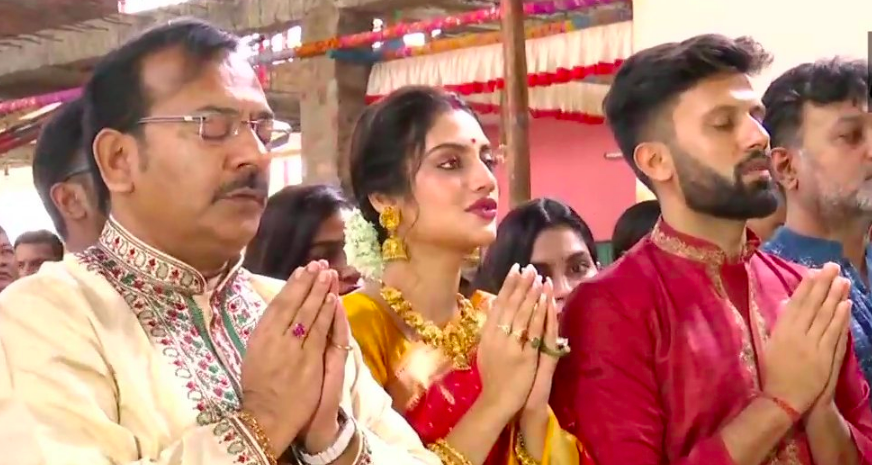 Kolkata: A prominent Muslim cleric on Monday slammed Trinamool Congress Lok Sabha member Nusrat Jahan for attending Durga puja celebrations, and said the popular Bengali film actor should change her name and religion because she is “defaming Islam and Muslims” by her actions.

Jahan, the first-time MP from Bashirhat, has been in the line of fire of the Muslim clergy for sporting symbols of Hindu matrimony like ‘mangalsutra and sindur‘ since her marriage to a Hindu entrepreneur Nikhil Jain earlier this year.

“This is nothing new. She has been offering puja to Hindu Gods despite the fact that Islam orders its followers to pray only to ‘Allah’. What she has done is ‘haram‘ (sinful).

“She had also married outside religion. She should change her name and religion. Islam doesn’t need people who assume Muslim names and defame Islam and Muslims,” Mufti Asad Qasmi, a cleric associated with Darul Uloom Deoband, told TV news channels.

Resplendent in a saree and sporting sindur, Jahan had attended Durga puja celebrations of Suruchi Sangha with her husband on Sunday. TV channels showed her lip-syncing to hymns being recited by a priest, her eyes closed and hands folded in solemn prayer. She also beat a drum and danced joyously.

Jahan had later told journalists that she had prayed for peace and prosperity of all.

“In Bengal we all celebrate all festivals together. I always enjoy being part of the celebration,” she said.

“I don’t bother about controversies. Controversies touch me? No,” the doughty actress, who has often insisted she represents an inclusive India, said, when asked about whether her celebrating Durga puja will set off a fresh row.

Reacting sharply to the Deoband cleric’s comments, Waseem Rizvi, the chairman of Uttar Pradesh Shia Waqf Board, said Jahan was free to wear emblems of Hindu marriage like sindur, bindi or mangalsutra.

“Islam does not bar her from wearing these things…there is no problem. If any follower of Islam wants to convert to another religion, they can do so, but nobody can be thrown out of Islam,” he told a TV channel.

Jahan was trolled by several Muslim clerics for taking oath as MP on June 25 while wearing a saree and sporting sindur and mangalsutra, with Qasmi and some others calling it un-Islamic.

But the plucky actor had responded to criticism with characteristic boldness, asserting she represented an inclusive India.

I represent an inclusive India.. which is beyond the barriers of caste and creed and religion.. as much as I respect all religions.. I still remain a muslim.. and non should comment on what I choose to wear.. faith is beyond attire.. and is more about believing and practicing the invaluable doctrines of all religions. Nusrat, she had said.