On October 10, four Muslim youth were sent to jail for attending their college's garba event. 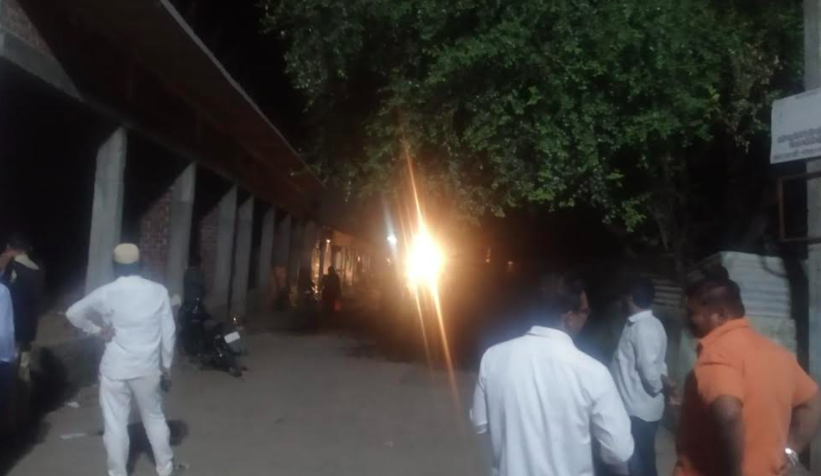 Men gather at the site of the clash triggered by outrage against a minor Muslim's presence at a garba event in Madhya Pradesh's Sendhwa. Photo: Kashif Kakwi/The Wire

Bhopal: A day-long curfew was imposed and nearly two dozen people were arrested after a clash erupted over the alleged presence of 10-year-old Muslim boy at a garba venue in Sendhwa city of Madhya Pradesh’s Barwani district, on October 13.

Located on the Maharashtra border, Sendhwa has a history of communal incidents.

According to Barwani Police, a dispute erupted when a Muslim boy was spotted at a garba venue in the Moti Bagh locality. This was objected by a Hindu teenager who had had a previous tiff with the Muslim boy’s family. Heated arguments turned into a brawl which got worse as adults got involved in the fight which saw stone pelting as well.

“A trivial fight among boys became a communal incident and soon, the communities came face-to-face and pelted stones at each other, leaving a dozen people injured including women and children,” said Deepak Shukla, Superintendent of Police, Barwani district.

After Indore, another brawl over Muslims entry in #Garbha in MP.

Curfew imposed in Sendhwa city of Barwani after a quarrel b/n kids of two communities over Mohalla #Garbha_Event took an ugly turn on W’day.

The officials said that a “lack of trust” between two communities and WhatsApp rumours which spread like wildfire soon after the stone pelting turned one community against another.

Sensing the gravity of the incident owing to the festive season and the spread of rumours, the district administration clamped Section 144 of the Criminal Procedure Code since the night of the incident – October 13 – and imposed a day-long curfew the following day.

As the news of stone pelting reached the Sub Divisional Magistrate (SDM) of Sendhwa, Tapasya Parihar, she along with Baldev Mujalda, in-charge of Sendhwa police station, rushed to the spot with police forces. However, police were attacked by the locals.  Stone pelting left four injured, said police.

Meanwhile, a crowd of over 500 men of the majority Hindu community picketed the Sendhwa Police station demanding an FIR be lodged and arrests be made among Muslims. This mob manhandled a 14-year-old boy, his mother and two of his relatives who had gone to the police station to register a complaint after the minor child sustained a head injury during the stone pelting among two communities.

Police had to use mild force to rescue the child and his family. 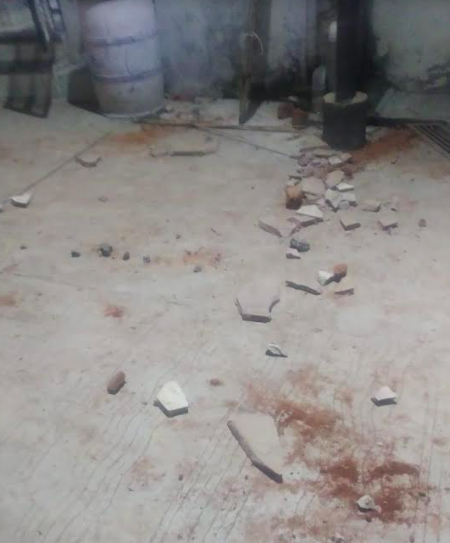 ‘The heated arguments turned into a brawl which got worse as adults got involved in the fight which saw stone pelting as well.’ Photo: Kashif Kakvi/The Wire

An eyewitness said that the mob not only roughed up the child and his family, but also manhandled Sayed Afzal, the chief Muslim cleric of the city and a Congress leader, Mohammad Samar, who had gone to the police station for a meeting called by the SP, Deepak Shukla, to control the situation.

“We would have been lynched by the mob if the cops did not rescue us,” Sayed Afzal told The Wire over phone.

The mob dispersed after police assured them of action. But even after they had dispersed, some miscreants targeted shops owned by Muslims and attacked the place of worship which was foiled by the police. “The angry mob damaged a car and a motorcycle in Sadar Bazaar area, forcing police to resort to lathicharge,” said an official.

“It’s unfortunate that a fight between the two kids took a communal turn and took away the happiness of the festivities which came after a year of COVID-19-induced restrictions,” said Chotu Choudhary, a BJP leader and vice president of Sendhwa Municipal corporation. Choudhary added that they were “cooperating with administration to bring peace.”

In a bid to restore normalcy, district administration held separate meetings with members of both communities to prevent further escalation. Later in night, police registered three FIRs in connection with the incident, booked over 30 people from both communities and arrested 15 people in a late night operation, SP Shukla told The Wire.

The other two FIRs were lodged against the Hindu and Muslim communities respectively, under the same sections – 143, 148, 294, 323 and 506 of the IPC – naming 26 people. Twenty of them are Muslims and six are Hindus.

Until Monday night, police have arrested 22 people in all three cases.

The following day, police held a joint meeting urging members of the both communities to maintain peace. “The consensus arrived at in the meeting was that not more than 200 people will take part in Rawan Putla Dahan. The scheduled processions of Duga Visarjan and Eid Milad-un-Nabi would be cancelled only allowing in-house events,” said Sendhwa SDM Parihar.

“We have urged the members of the Muslim community to celebrate Eid Milad-un-Nabi in their mohallas as permission for the procession has been denied due to tension,” the SDM added.

Ahead of Eid Milad-un-Nabi on Tuesday, security has been beefed up and senior cops will be deployed in sensitive areas and high rise buildings, said Sendhwa police station in-charge Baldev Mujalda.

“Two companies of police forces were called from Indore and district headquarters to tackle the situation and Section 144 is already in place,” Mujalda said, adding that police is keeping close eye on the WhatsApp groups to stop the spread of rumours and provocation. Police have already detained a few youths for posting provocative WhatsApp status updates.

“Section 144 will be in place until the normalcy returns,” said the SDM.

This is not a standalone communal incident triggered by a Muslim’s presence at a garba event.

Three days before the Sendhwa row, on October 10, four Muslim youths were sent to jail for attending their college’s garba event.

Although the event was open to all, members of the Bajrang Dal and Vishwa Hindu Parishad “caught” the four from a VIP parking area and handed them over to Gandhi Nagar police. They were booked on charges of creating “public nuisance” and violation of COVID-19 norms and sent to jail the following day.

In addition to that, in Ratlam district, VHP members put up posters prohibiting entry of Muslims in 56 garba pandals, apparently to avoid “controversial events”. Similar posters came up across Madhya Pradesh as well.