Decoding the RSS Chief and His Apparently 'Moderate Messaging'

The RSS does acknowledge diversity, but wants to create a hierarchical order. 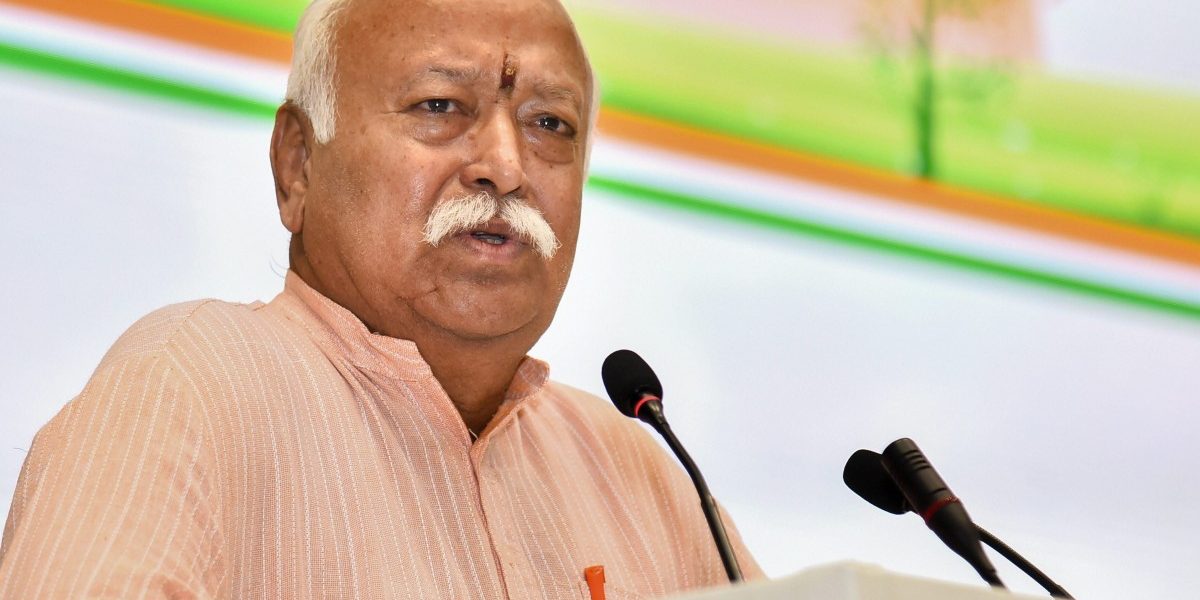 Mohan Bhagwat has been, perhaps, the most media-savvy chief of the RSS. He, very often, makes splashes in the media, perhaps to counter Narendra Modi’s regular media blitz. Bhagwat recently addressed the Muslim Rashtriya Manch, the minority-wing of the RSS consisting mostly of Shia Muslims, and made some startling, seemingly moderate statements, such as decrying incidents of lynching against the Muslims and declared them to be against Hindutva, or stating, that there could never be a dominance of either Hindus or Muslims.

In response, scholars like Faizan Mustafa welcomed this as a ‘moderation’ and suggested this could be a “perestroika” moment of a “radical change” in the RSS initiated by the chief, Mohan Bhagwat. Apart from the fact that perestroika did no good to the erstwhile Soviet Union, this reading is at best optimistic and at worst naïve.

A recent book by Badri Narayan Tiwari, director of Pant Institute, Allahabad, said to be based on extensive fieldwork, has discovered RSS to be “socially inclusive” and has substantially changed its attitude on the questions of caste. In fact, most of the practices he cites are very old and the Sangh has always claimed that its shakhas never ask for anyone’s caste and that it has always said that we are all Indians first, and Indians last. Indeed, the theme of the meet where Bhagwat spoke was ‘Hindustani First, Hindustan First’. It might be read as further “proof” of the interpretation Tiwari offers in his book, which again could be partly the problem of a methodology in social sciences that is often referred to as positivism and empiricism, and partly in keeping with the flavour of the season.

How else to interpret what Bhagwat said about lynchings and also his argument in three earlier lectures at Vigyan Bhawan arguing that there is in fact no Hindutva without the Muslims?

Gandhi had once remarked when asked about his idea of happiness: “Happiness is when what you think, what you say and what you do are in harmony.” One could safely argue that RSS represents the other end of the spectrum as ‘unhappy consciousness’ – a contradictory being. They understand the different shades of the Hindu philosophy’s reality of seeing things as being grey, and not black and white. That this layered nature of reality born out of social differences is something that the RSS is aware of but is repelled by.

Savarkar had contempt for the diversity within Hinduism. It is this duality that often prompts the RSS to devise a ‘strategy’ that acknowledges the diversity but then soon collapses it into a “common DNA”, which reminds us of a “common humanity”. Bhagwat added that “the basis of unity should be nationalism, glory of ancestors” which refers to a period when Islam had not yet arrived in India, and elsewhere nation and being Indian is equated with a ‘Hindu way of life’, which in turn is claimed to be social and cultural, and not religious.

Also read: The RSS Chief Should Eschew Uniformity in Favour of Gandhi-Ambedkar’s Ideals of Plurality

This sentiment that to be an authentic Indian one needs to be a Hindu got reflected in the recent Pew center’s survey on religion. Similarly, most respondents in the survey saw being a Hindu is to accommodate diversity but with segregation. What are generally considered to be binary discourses in secular-progressive politics is seen through a lens of continuum and also as dialectically interlinked by both the RSS and the popular ethos. I pointed to this in my book India after Modi (2018) as combining a “dispersed strategy with a unified ideology” and further referred to the optics they wish to create as “performative dialectics”.

The RSS does acknowledge diversity, but what they wish to do with it is to create a hierarchical fraternity and polarise differences. Diversity is being internally subverted to create conflict, and the unity that is being offered is one that which is hierarchical and discriminatory and not based on mutuality and reciprocity.

RSS fans latent prejudices to disempower communities – both on grounds of caste and religion – in order to disaggregate and disempower them in a way where the path Hindutva offers becomes the only collective life possible. It corners and disempowers the so-called lower castes and mobilises one against the other in a way representative democracy allows for. The fact is that Hindutva forces have expanded the representation of the lower-end OBCs and smaller Dalit communities. Similarly, the pitch is to internally divide Muslims across sect, gender and class. This might along with what the progressives refer to as ‘politics of difference’ but the purpose here is to divide and not to provide mobility and social inclusion. In the given context, the RSS will always combine multiple discourses and strategies.

A society that is conflict-ridden and internally divided at various levels becomes dependent on the hegemon for both mobility and protection. This cannot by any stretch of imagination be referred to as ‘socially inclusive’, instead it can be quickly grasped by the iconic dialogue in the film Sholay, where the villain Gabbar Singh says, “Gabbar ke taap se tumhe ek hi aadmi bacha sakta hai, ek hi aadmi … khud Gabbar”. This in essence is how the RSS visualises its indispensability, which is born essentially out of a gaze of the fossilized imagination of unchallenged caste privilege.

It assumes the power to make and break, depending on who it considers to be an immediate threat and who it might think is its long-term ally and who might be irrelevant to the process.

If one observes what  Bhagwat says in isolation or what looks like ‘social inclusion’ in isolation from what else is happening, then the story and its plot are lost. Condemning lynching is a soft reminder as to who can ‘finally’ rescue the Muslims in India – it is not the liberal intelligentsia, it’s not the social activism, not Dalit-Muslim unity and certainly not the constitution, it is the RSS alone that is capable of doing it.

Just like, Gabbar, it can run amuck but it can provide protection too in exchange of subordination, to be read as loyalty. In the aftermath of partition, Muslims ‘traded off’ social and economic rights for cultural/religious identity, today they are being asked to ‘trade off’ culture for physical protection.

It is not in the DNA of the RSS to grasp the beauty of ‘moderation’  and aesthetics of ‘social inclusion’, for if they did they wouldn’t be approvingly shepherding a political regime that just oversaw the death of a Jesuits priest and social activist, father Stan Swamy. These are fairly interconnected issues and those who would have us believe otherwise are part of the same phenomenon of reading helplessness as self-delusional inclusivity.