Militarising Hindus Is a Long-Standing Unaccomplished Project of Hindu Nationalists

Savarkar, the ideological guru of the Sangh Parivar, firmly believed that able-bodied and armed Hindus were the only answer to the "growing danger from the designs of the awakened Muslim mind”. 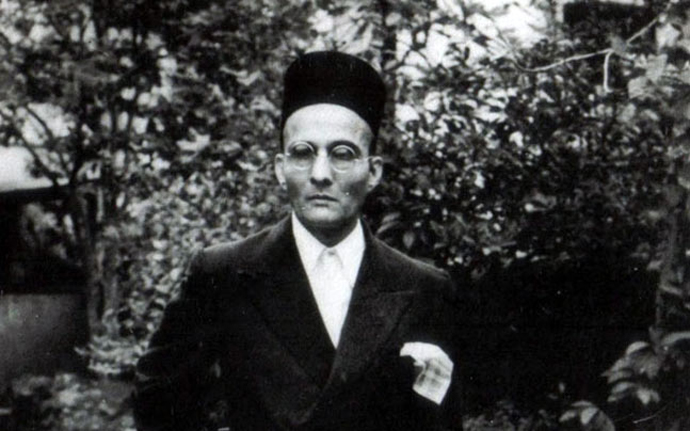 When he was a lad of ten and studying in a village school near Nashik, Vinayak Damodar Savarkar, the ideological guru of the Sangh Parivar, was called ‘Hindu Generalissimo’. Weeks prior to this, he motivated classmates to turnout and pelt the local mosque in retribution for riots in distant Azamgarh (United Province then and now Uttar Pradesh). The damage to windowpanes was so substantial that the boys claimed ‘victory’.

At that early age, Savarkar decided that ‘pressure’ on Muslims could be maintained if Hindu children publicly turned out to perform mock war drills. Callisthenics was considered by this young boy as the first step in militarising Hindus and this ‘power’ that could be harnessed, could be used against Muslims – the ‘enemy within’. This childhood ambition to militarise Hindus to confront Muslims became part of Savarkar’s mission in life and he repeatedly made efforts in this direction.

When still interned in Ratnagiri as part of his imprisonment, Savarkar wrote a book titled Hindu Pad-Padashahi. It depicted the Maratha empire as the avenger of Hindu honour and termed the Marathas a military race. He argued that its successful struggle against Mughals was the blueprint for establishing an independent Hindu empire.

In the late 1930s and early 1940s, after his prison term was terminated and he was allowed to live as per his choices, Savarkar canvassed for Hindus to enlist in the British army. The objectives were two-fold: to impress upon colonialists that he was a loyalist despite taking charge of the Hindu Mahasabha presidency. Second, he contended, World War II provided an opportunity for Hindu society to get trained in the ways of the military and prepare for conflict with the eventual enemy – Muslims.

His biographer, Dhanjay Keer wrote that at a meeting with the Lord Linlithgow, Viceroy of India, he promised cooperation in “policy of militarisation”. By that time, Savarkar firmly believed able-bodied and armed Hindus were the only answer to what he called “growing danger from the designs of the awakened Muslim mind”. He had already told a Mahasabha meeting that if Hindus grew in strength, Muslims would eventually be relegated to the position of Jews in Germany.

Savarkar did the job of the British administration by going and addressing meetings in schools, colleges and even literary gatherings to canvass for the idea of enlisting in army. He told Hindus that one way of reducing Muslim influence on the state apparatus was to enlist in its various wings – especially army and police. This way Muslims would get excluded from the work force.

An effect of his desire for societal militarisation to bolster Hindu masculinity was evident in his push for the nation as Fatherland and not as Motherland, as most Hindus envisioned the nation especially from the late 19th century as a goddess, Bharat Mata. Militarisation for Savarkar was a means of de-feminising Hindus and thus the idea of pitribhu and punyabhu – Fatherland and Holy Land.

It is not just Savarkar who called for militarisation of Hindus. The Rashtriya Swayamsevak Sangh (RSS) repeatedly terms itself as a cultural organisation. Yet, many of its routines mirror military activity. Keshav Baliram Hedgewar, its founder, was deeply drawn to militaristic ideas in his youth.

On his return from Calcutta with a medical degree in the middle of the second decade of the 20th century, he revived past linkages with old associates and revived the Kranti Dal, an organisation with revolution as its objective and armed rebellion as means to achieve this. It is different that military activities were limited to workouts in a gymnasium and acquiring arms illicitly and sending it to revolutionary groups in other parts of the country. There was no centralised training programme and all activity was little but romantic adventurism.

Like Savarkar, Hedgewar too was fascinated from childhood by tales about Shivaji, his military abilities and how he defied Mughal power with it. Eventually, when he established the RSS in 1925, the initial pledge that all took included a declaration that each entrant into the order would not abandon pursuit of physical, military and political education. They were also to commit themselves to training others. 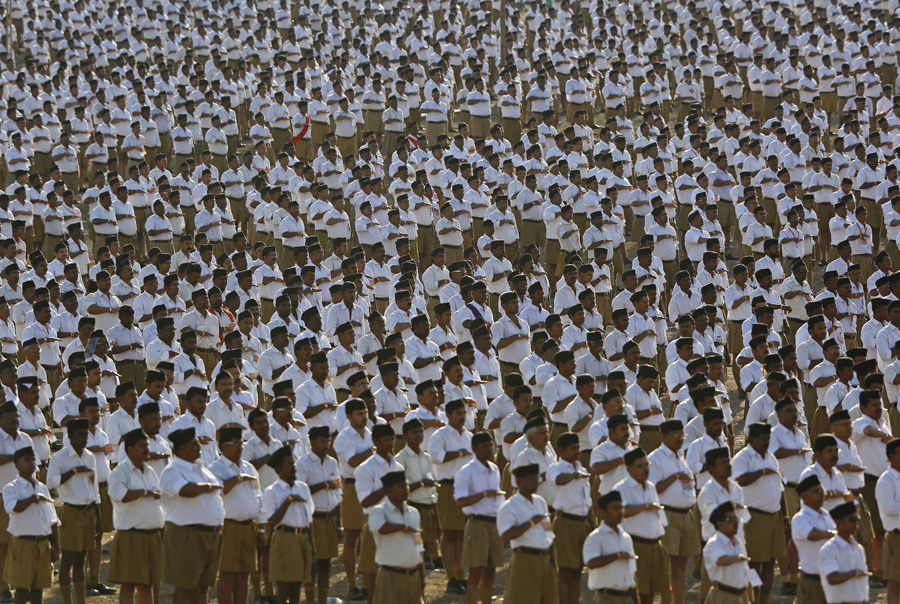 The RSS repeatedly terms itself as a cultural organisation. Yet, many of its routines mirror military activity. Credit: Reuters/Danish Siddiqui

Hegdewar chose khakhi as the colour for RSS ganvesh or uniform because it was a military colour. In 1940, during WWII, when the British government prohibited civilian use of military colours, the khakhi shirt was changed to a white one.

Furthermore, Hedgewar’s fascination for militaristic ideas was reflected in the title he chose for the chief trainer of RSS – sarsenapati, also the title for commander-in-chief during the Maratha empire. Hedgewar also entrusted the conduct of the weekly parade of swayamsevaks to a retired army officer.

Hedgewar’s mentor, BS Moonje – as part of efforts to resurrect iconic Hindutva leaders, BJP organised a programme in 2012 to mark his birth centenary – was trained as doctor and spent several years in British army as a King’s Commissioned Officer in South Africa during the Boer War.

Later, he visited Italy as art of his trip to attend the First Round Table Conference in England in 1931. In Italy, he visited several important military schools and educational institutions. These included Military College, the Central Military School of Physical Education and the Fascist Academy of Physical Education in Rome. He also spent time in the Balilla and Avanguardisti organisations that were the mainstay of the fascist system of indoctrination of youths.

After his visit to Italy he wrote: “Hindu India need some such institution for the military regeneration of the Hindus… Our institution of Rashtriya Swayamsewak Sangh of Nagpur under Dr Hedgewar is of this kind…”

Moonje and Hedgewar, though guru and shishya, had differences but were united in the belief that militarising Hindus was urgently needed. Moonje wanted to establish a national militia stationed against the ‘enemy within’ and when this effort failed, he established the Bhonsala Military School in Nashik under the aegis of the Central Hindu Military Education Society (CHMES). Hedgewar was nominated as board member.

CHMES now runs a school and college of the same name in Nashik. Students are considered followers of Lord Rama thereby addressed as ‘Ramdandees’. The school helps student prepare for the UPSC (NDA) Examination, SSB Interview and to build up physical and mental abilities.

The college also offers preparatory military education along with some regular university courses. The school earned notoriety some years ago when it came to light that Lt. Colonel Shrikant Prasad Purohit, who spent nine years in prison in the 2008 Malegaon blasts case, attended a special coaching class for short service commission officer-aspirants. 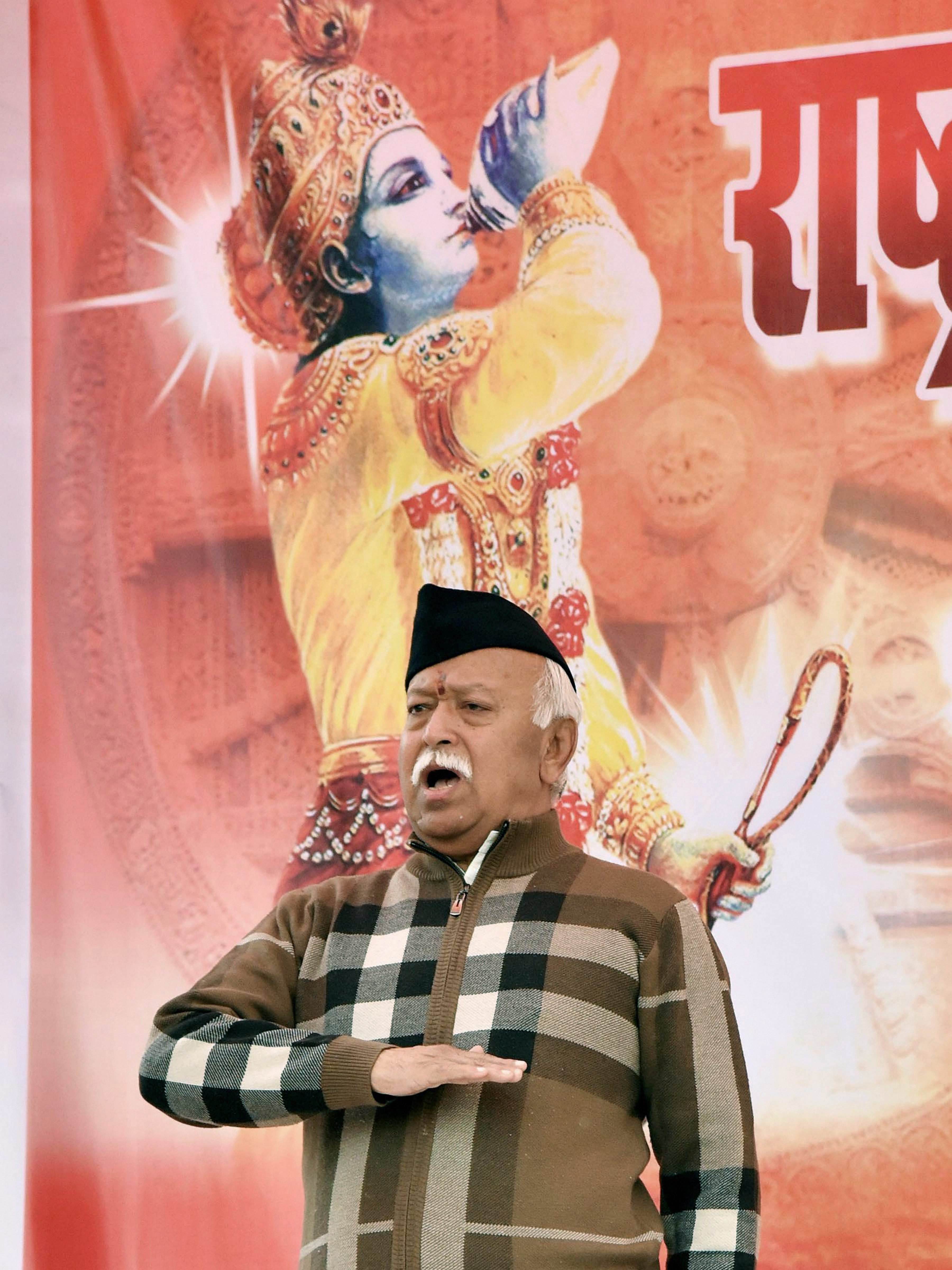 Mohan Bhagwat at an RSS meeting in Patna on Sunday. Credit: PTI

Madhukarrao Dattatraya Deoras, popularly known as Balasaheb Deoras was also attracted to militaristic ideas. He was extremely fond of several English military tunes and he suggested to Hedgewar that they be included into the repertoire of the RSS band.

RSS leaders have always aspired a militaristic role with a Hindu orientation in state functioning. This ambition was realised after independence when MS Golwalkar successfully campaigned with Sardar Patel to appoint Punjab RSS sanghachalak, Rai Bahadur Dewan Badri Das as the acting governor of Eastern Punjab.

The deceased D.R. Goyal, a former RSS swayamsevak turned critic, journalist, writer and activist wrote that giving Das charge of refugee camps and relief operations was like putting a RSS signboard outside these offices. Additionally, the military commander of Delhi asked Golwalkar to depute swayamsevaks for peacekeeping operations.

Probably the biggest instance of political naiveté on Jawaharlal Nehru’s part was the government’s decision to invite a separate contingent of the RSS to participate in the Republic Day parade after the humiliating loss in the 1962 war with China. This has been used by RSS consistently since then to showcase nationalistic credentials.

The government overlooked its order when the RSS was banned in February 1948 after Mahatma Gandhi’s assassination. It stated the government was duty-bound to ” put down such a fanatic manifestation of violence, and so, as a first step, the RSS was being declared illegal”. There was evidence that the organisation was “circulating leaflets exhorting people to resort to terrorist methods, to collect firearms, to create disaffection against the government and suborn the police and the military…”

Mohan Bhagwat’s recent statement may not be insulting towards the Indian army but it demonstrates little knowledge of the grind required to raise a credible fighting force that can defend the nation against enemies beyond the country’s borders.

Undeniably, the RSS still imagines that a professional army can be raised by merely by recruits from an organisation where volunteers spend a few hours every week in callisthenics with at best a wooden stick. It shows inadequate knowledge about rigours of military training. It also underscores that the understanding has not evolved greatly since Savarkar gloated at being referred as Generalissimo.