While the motive of the murder is not immediately clear, there appears to be a link between Fazil's killing the murder of a BJP youth worker that occurred in the Sullia region of the district on the evening of July 26. 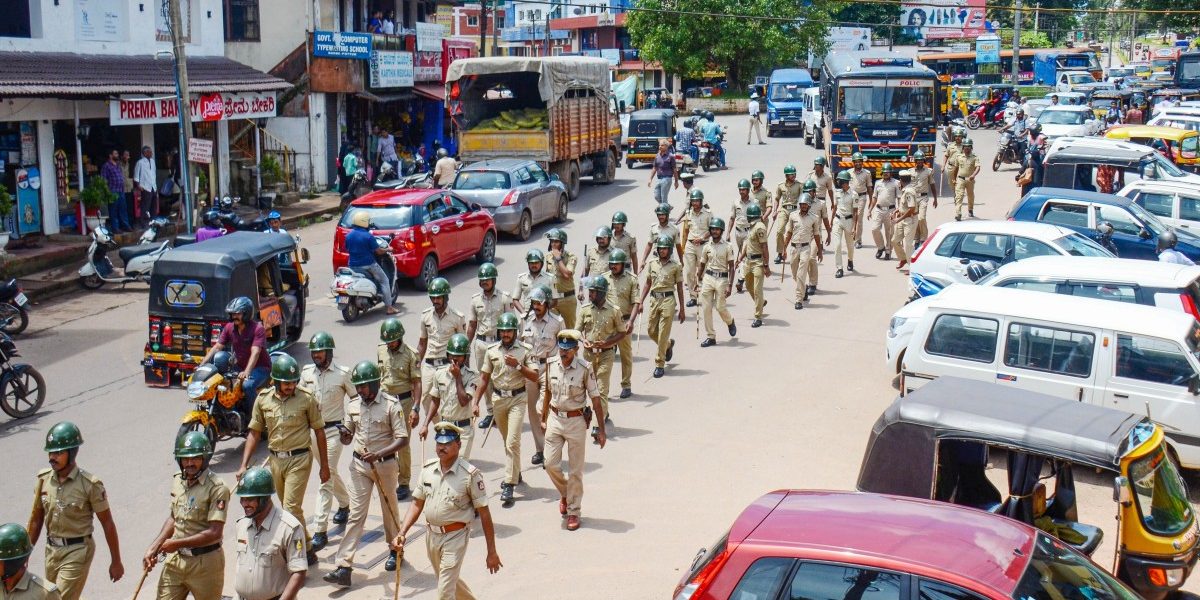 Police personnel conduct a march past in Puttur, Mangaluru, Thursday, July 28, 2022. Tension prevailed in Puttur and other talukas of Dakshina Kannada district following the murder of Bharatiya Janata Yuva Morcha (BJYM) member Praveen, who was hacked to death on Tuesday evening, July 26, by unidentified people on a bike. Photo: PTI

New Delhi: A 23-year-old man was hacked to death inside a clothing store Surathkal region, in Karnataka’s Dakshina Kannada district. The murder was captured by the CCTV camera, and the assailants were four masked men.

The victim has been identified as Fazil, 23, a local businessman. Police said he was initially attacked outside the Bee Jay’s clothing store while he was chatting with a friend. The assailants chased him with a machete and cornered him inside the store, hacking him to death. Other store workers tried to stop them by throwing objects from a distance, but were unsuccessful.

While the motive of the murder is not immediately clear, there appears to be a link between Fazil’s killing the murder of a BJP youth worker that occurred in the Sullia region of the district on the evening of July 26.

“At around 8 pm, a 23-year-old youth was attacked with weapons by a group of four or five men. We have gathered some information from an eyewitness who was standing with him when the attack occurred and others at the spot. A case has been registered at the Surathkal police station and we are ascertaining why the murder occurred,” Mangaluru police commissioner N. Shashikumar said.

Security has been beefed up in Dakshina Kannada and Udupi districts in view of the tense situation, police said on Friday. Schools and colleges in Suratkal, Bajpe, Mulki and Pannambur police station limits will remain closed today.

Two residents of Bellare have been arrested in connection with BJP Yuva Morcha activist Praveen Nettar’s murder, investigation is on to nab the assailants of Fazil.

Meanwhile, a large number of people took part in the funeral procession of Fazil here today.

Karnataka Home Minister Araga Gnanendra in a statement condemned the killing of Fazil and said the perpetrators will be brought to book. Chief minister Basavaraj Bommai met Nettar’s family members in Mangaluru on Thursday evening and offered their condolences.

The communally sensitive coastal district is tense following the murders in the past few days.