Madhya Pradesh Police Apologise for Beating Lawyer, 'We Thought You Were Muslim,' They Say

Police have allegedly attempted to get lawyer Deepak Bundele to withdraw his complaint on the seemingly unprovoked beating.

New Delhi: In Madhya Pradesh’s Betul, an incident which is striking in its example of Islamophobia and police highhandedness has come to light.

On March 23, a lawyer Deepak Bundele was beaten up brutally by the state police while he was on his way to a government hospital for treatment. A month later, he is under pressure from the police to withdraw his complaint. Police officials, in their defence, told Bundele that he was beaten up because they had wrongly identified him as a Muslim man.

Speaking to The Wire, Bundele said that on March 23, between 5.30 and 6 pm, he was on his way to the hospital when he was stopped by the police. “The nationwide lockdown hadn’t come into place then but Section 144 had been imposed in Betul. I have been an acute diabetic and blood pressure patient for the last 15 years. Since I was not feeling well, I decided to visit the hospital and get some medicines. But I was stopped by the police midway.”

Bundele, who sports a beard, said that he explained to police personnel that he had to get his medicines but one of them slapped him without trying to listen to what he was saying.

Also read: Islamophobia Is Worsening the Anxieties of the Lockdown

“I told them that they should act within constitutional limits, and that I was ready to be detained under Section 188 of the Indian Penal Code if the police thought so. On hearing this, the police personnel lost their temper, and started abusing me and the Indian constitution. Within no time, many police officials came and started beating me up with sticks,” Bundele said.

Only after he said he was a lawyer and would take them to task did they stop beating him, he said. “But by that time my ear had started bleeding profusely,” Bundele alleged. 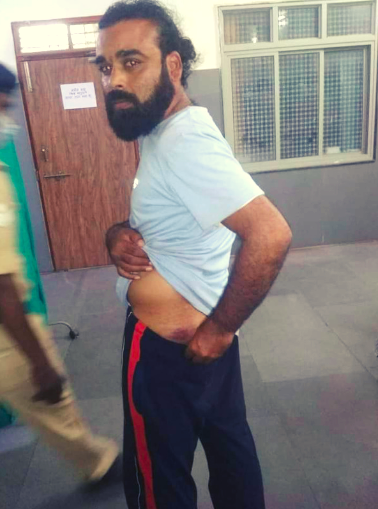 Deepak shows his injuries in the aftermath of the beating. Photo: By special arrangement

He called his friend and brother to accompany him to the hospital later, and got a medicolegal case (MLC) report done.

On March 24, he filed a complaint with the district Superintendent of Police D.S. Bhadoria and the state Director General of Police Vivek Johri.

He wrote subsequent letters to the chief minister, state’s human rights commission, the Chief Justice of Madhya Pradesh high court and top government officials. Bundele also said he filed a RTI application for the CCTV footage of the March 23 incident, but was denied the information. “I received a reply saying that I had not clearly stated the reason for which I made the RTI request. But I have been told unofficially that the CCTV footage may have been deleted from the government files,” the lawyer said. 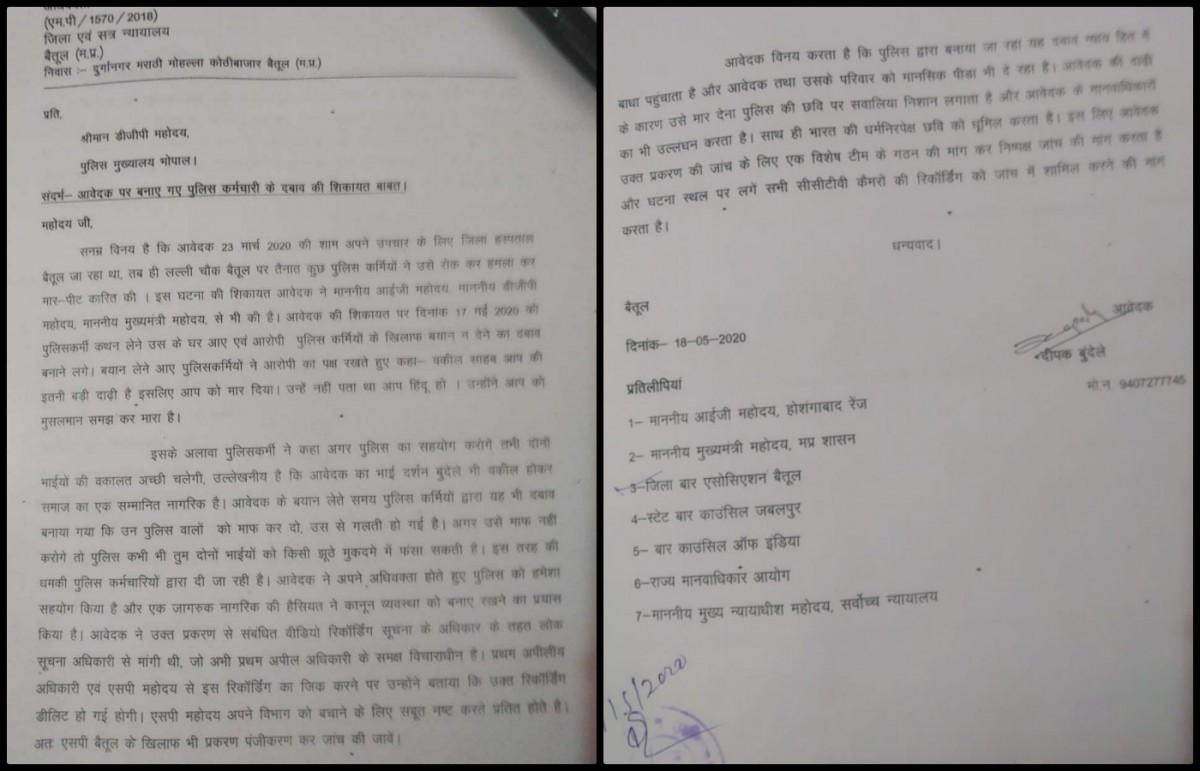 Since then, he alleged, police have been trying really hard to get him to withdraw the complaint. “First, some of the top officials told me that they could issue a statement condemning and apologising for the incident, if I withdraw my complaint. Then some told me that if my brother, who is also a lawyer, and I wanted to practice law peacefully, I should stop pursuing my complaint.”

However, Bundele didn’t budge. In his March 24 complaint to the SP he requested the district police to file an FIR against the incident. On that basis, a few police officials came to his house on May 17 to record his version. This is when the police told him that this was a case of mistaken identity, and that the police officials thought he was a Muslim.

“It should have taken the police officials not more than five minutes to record my version, but it took around three hours as they kept trying to convince me to withdraw the complaint,” Bundele said.

According to the voice recording Bundele shared with The Wire, voices allegedly belonging to police officials are heard saying that his assault was a mistake on the part of a few officials who thought he was a Muslim because of his beard. Then they go on to say that police generally support the Hindus in a situation of communal riots.


“We seek an apology on behalf of those officials [who assaulted Bundele]. We are truly embarrassed because of the incident. If you want I can bring those officials and make them apologise in person to you,” the alleged police officials are heard saying.

“I am making a heartfelt request to you to write, ‘the police did not behave indecently with me or beat me up’. Please agree to our request; understand that we are living in Gandhi’s country; we are all Gandhi’s children…I have at least 50 friends from your caste,” the police official said.

“All those people are ashamed that they did something like this to a Hindu brother without knowing his identity.

“We do not have any enmity against you. Whenever there is a Hindu-Muslim riot, police always supports the Hindus; even Muslims know this. But whatever happened with you was because of ignorance. For that, I have no words,” he said.

Bundele clarified that there was no Hindu-Muslim riot that day, and asked whether he was beaten for being wrongly identified as a Muslim. The police officials agreed, and said:

“Yes, exactly. You had a long beard. The man (who assaulted you) is a kattar (staunch) Hindu…In Hindu-Muslim riots whenever a Muslim is arrested, he beats them up brutally, always.”

Bundele then goes on to say that he had been a professional journalist with leading dailies in Bhopal for 10 years, and came back to Betul only in 2017 to practice law while insisting that he won’t withdraw his complaint. He said that he has already requested top officials of the state and the country to take action in the case, and therefore, will pursue the complaint now.

An FIR against this case has still not been registered, Bundele said. “I was struck by the way the police officials apologised. Even if I was a Muslim, what gives the police the right to assault them without any cause,” he said.

The Wire sent a request to the Betul SP for a comment, but he has not replied. The story will be updated if and when his response comes.