Stones were pelted by both communities, allege eyewitnesses. A Muslim man's house was razed by administration because it was rented by three of the accused and did not have "building permission."

Bhopal: Rightwing Hindutva groups’ attempts to enter a locality primarily populated by Muslims – against police instructions – as part of their ‘Shourya Yatra’ in Manawar tehsil of Madhya Pradesh’s Dhar district developed into a clash with stone pelting from both sides recently. However, police have only arrested Muslims among those accused and inexplicably razed a Muslim man’s house for harbouring three of the accused there and not having “building permission.”

On December 23, 2021, Hindutva groups led a massive ‘Shourya Yatra’ (‘bravery rally’) with a DJ playing music. When they tried to enter the Gandhi Nagar locality, they were stopped by the police with the use of mild force.

Police action led to rumours spreading that a communal clash had begun between Hindus and Muslims. The region had seen a similar clash in 2016 and is understood to be communally sensitive.

The rally and the clashes later are similar to how events transpired in 2016.

On January 12, 2016, communal violence broke out during the Vishwa Hindu Parishad’s ‘Shourya Yatra’ in Manawar city forcing the district administration to clamp down Section 144 to restore peace. During the violence, the mob burned down dozens of shops owned by the members of the Muslim minority community.

On December 23, minutes after the Gandhi Nagar incident, a clash broke out in Sindhana Road and Nala Prangan of the city between Hindus and Muslims. The site of the clash is almost a kilometre from Gandhi Nagar, police said.

Dhar police has registered three separate FIRs in Manawar police station against 30 named and 22 unnamed people, under various sections of the Indian Penal Code, including rioting, attempt to murder, kidnapping and Prevention of Damage to Public Property Act, 1984.

Police have also arrested over a dozen accused – all of whom are Muslims.

“Infighting between organisers of the Shourya Yatra over the route of the rally and police’s intervention to ensure that the given route was followed created a chaos leading to the rumours of communal clash in the region. Subsequently, an incident of stone pelting was reported in Sindhana Road and Nala Prangan which is over a kilometre away from the rally,” said Aditya Pratap Singh, Dhar Superintendent of Police.

An eyewitness of the incident, however, claimed that the mob was trying to enter into an area with a heavy Muslim population – entry to which had restricted by police. They tried to push through police barricades, which was when cops used mild force, said the eyewitness.

Of three FIRs, one was registered on the complaint of a Bajrang Dal worker Pankaj Khushwaha (36) against 12 identified and 13 unidentified Muslim men for attempting to murder (307), rioting (147), trespassing (452), mischief causing damage to the amount of Rs 50 (427) and others.

Speaking to reporters, Dheeraj Patidar, Additional Superintendent of Police at Dhar said that police registered FIRs based on the complaint of locals who were injured in the stone pelting and on the basis of video footage of the incident. “Over a dozen of the accused were arrested by the police and raids are being conducted to arrest others,” he said.

Two days after the incident, the district administration razed the three-storey building of 55-year-old Khalil Khatri to the ground. The property is worth over Rs 45 lakhs. Police have said that three of the accused were living there on rent and the owner had allegedly failed to produce building permission within fewer than 24 hours of serving notice.

“In the garb of nonavailability of the building permission, the administration demolished the home which I built after years of toil and hard work because three of my renters were named in the recent incident of stone pelting. I have nothing to do with the incident. All the houses near mine were built without building permission,” said Khatri.

Speaking over the phone, he said, “I pleaded before the Additional SP and Sub-Divisional Magistrate, requesting them to stop the demolition drive and promising them that I will take necessary permission. But they blamed me for sheltering criminals.”

Khatri alleged that, a day after the incident, police detained him along with his 30-year-old son Khalid, seeking details of the renters. “They released me at around 12:30 am, but my son is still in their custody,” he said.

“My house was demolished because I’m a Muslim,” he added.

Speaking to reporters after demolishing the building, Sub-Divisional Magistrate Shivangi Joshi said, “The demolition of the building is a warning to those anti-social elements who have tried to disrupt the peace. We have also recovered swords and knives from the house. We will continue this drive after identifying the accused.” 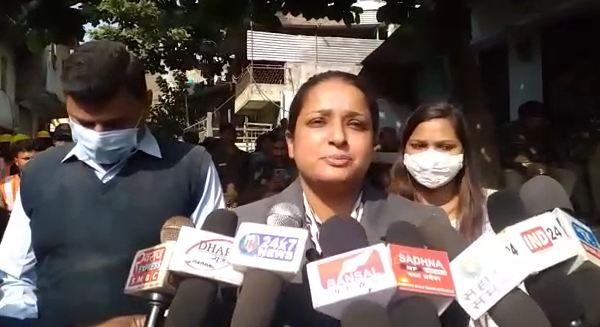 Jameel Siddiqui, Dhar district Shehr-e-Qaazib termed the incident unfortunate and alleged that police are targeting Muslims. “Stones were pelted from both sides and we urge police to take action against those involved in the violence,” he said, adding that a delegation of Muslims met with the Dhar SP and the Indore Inspector General, urging for fair action.

He further alleged, “The district administration demolished the home of Khalil Khatri who has nothing to do with the violence. All the houses constructed nearby also didn’t have building permission. He could have secured permission, if given time.”

Madhya Pradesh on Friday, also passed the MP Damage to Public and Private Property Recovery Bill, 2021, which enables recovery of public and private property damaged during the riots, protests and rallies by individuals or groups within 15 days of a tribunal’s verdict.

Talking to reporters after the assembly, state home minister Narottam Mishra said, “As I have said earlier, those who throw stones from their houses and cause damage to public and private property will now come under the ambit of law. They will not be spared. This bill has also been brought in so that anti-social elements and those causing riots will now fear the law.”