Police have filed FIRs against the attackers and survivors, both. The latter have claimed they were transporting cattle to sell them at a fair. 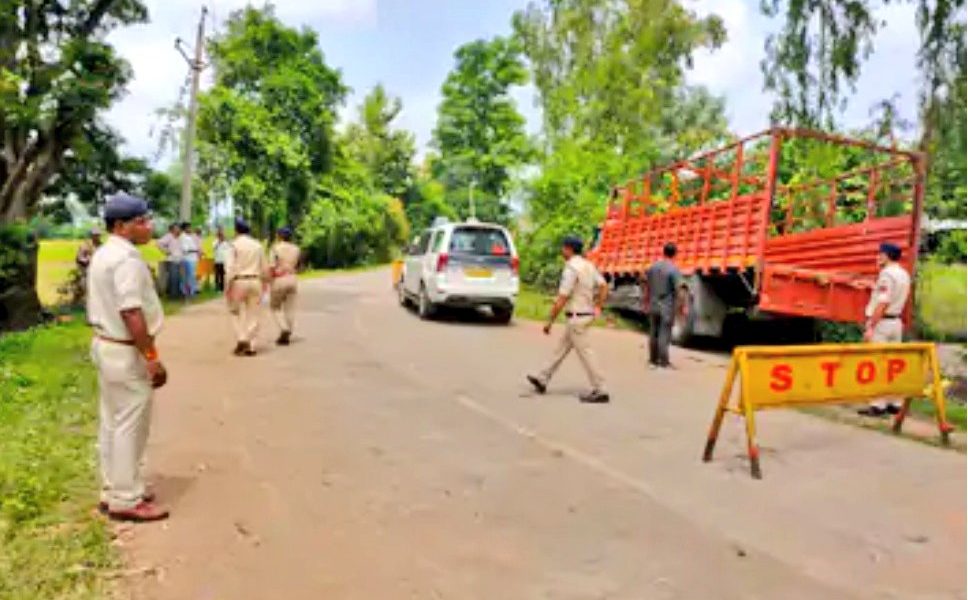 Police at the site of the lynching at Brakhad village of Madhya Pradesh's Narmadapuram district. Photo: By arrangement.

Bhopal: A 50-year-old Muslim man was beaten to death on suspicion of smuggling cows by cow vigilantes near Brakhad village of Madhya Pradesh’s Narmadapuram district at midnight on Tuesday, August 2.

According to police, Nazir Ahmad, a resident of Maharashtra’s Amravati was allegedly transporting 28 cows along with Shaikh Lala (38) and Sayed Mushtaq (40) from nearby village named Nanderwada of Narmadapuram district when a group of cow vigilantes armed with sticks and rods, stopped the truck and assaulted them. It was around 12:30 am.

Informed by locals, police reached the spot within half an hour of the incident, and rushed the three to a nearby hospital.

Nazir, who was hit on the head, succumbed to his injuries at the hospital. The two others have reported multiple injuries and are under treatment at the district hospital, the police said.

Speaking to The Wire, Narmadapuram Superintendent of Police Gurkaran Singh said the incident occurred “8-10 kilometres from Nanderwada village, where they had loaded the cows onto their vehicles.”

“Armed cow vigilantes who assaulted them are residents of nearby villages who had received information on bovine smuggling,” the SP said.

The SP said Nazir’s family have been informed of his death and are on their way to Narmadapuram. “The survivors’ statements are yet to be recorded,” he added.

Police claim to have rescued 26 cows from the truck. Two cows were found dead. The rescued bovines were sent to government-run cowsheds.

Police said that it prima facie appeared that the three were taking the cows to Amravati to sell them off in a cattle fair. Police have lodged two FIRs in connection with the incident – one against attackers and another against the survivors.

“An FIR was lodged against 12 unidentified people under section 302 (murder), 307 (attempt to murder), 147 (rioting) and 148 (rioting, armed with deadly weapon) of the Indian Penal Code while another FIR was registered against the two survivors for illegally transporting the cows. Soon we will make the arrests,” the SP added.

Speaking to reporters, one of the survivors, Shiakh Lala said their attackers were a group of over 50-60 men. “We had hardly travelled 8-10 kilometres when they blocked our road, forced us to come out of the truck and attacked us without enquiring into anything. They were armed with sticks and rods and killed Ahmad,” he said.

Shaikh Lala who was driving the truck claimed, "We have loaded the cows from nearby village and taking to Amravati for selling before the villagers attacked. They attacked us without asking anything." @thewire_in pic.twitter.com/hbVedv86TT

Lala who was driving the truck added that they were only taking the cows to Amravati to sell them in the animal fair.

This is the second incident in Madhya Pradesh in the last three months where a man was lynched on suspicion of cow smuggling or slaughtering.

On May 2, 2022, two Adivasi men accused of slaughtering a cow were allegedly lynched by a mob of 15 to 20 men associated with  Hindutva groups in Madhya Pradesh’s Seoni district.

The incident took place early on Monday morning between 2.30 am and 3 am in the Kurai police station limits. The deceased were identified as Sampat Batti, a resident of Sagar, and Simaria, who lived in Dhansa. The complainant, Brajesh Batti, who was also injured in the attack, alleged that the assailants belong to the Hindutva groups Bajrang Dal and Ram Sena. Batti said he, along with the men, were beaten with sticks, but he survived.

Congress spokesperson Narendra Saluja tweeted on the latest incident in Hindi, questioning the alleged role of the ruling party.

“An incident of mob lynching have happened in Seoni Malwa locality. One person has died while two are injured. If anyone had committed the crime the law will take its course. Reports are coming in, noting that the accused are associated with the ruling BJP. And attempts were made to save them.”

“Similar incidents are happening across Madhya Pradesh. People of the ruling BJP are taking the law into their own hands and killing people. Police should take strict action against the offenders after conducting a fair investigation into the incident.”