All processions were led by rightwing organisations from state's Malwa-Nimar region, a stronghold of the Rashtriya Swayamsevak Sangh. 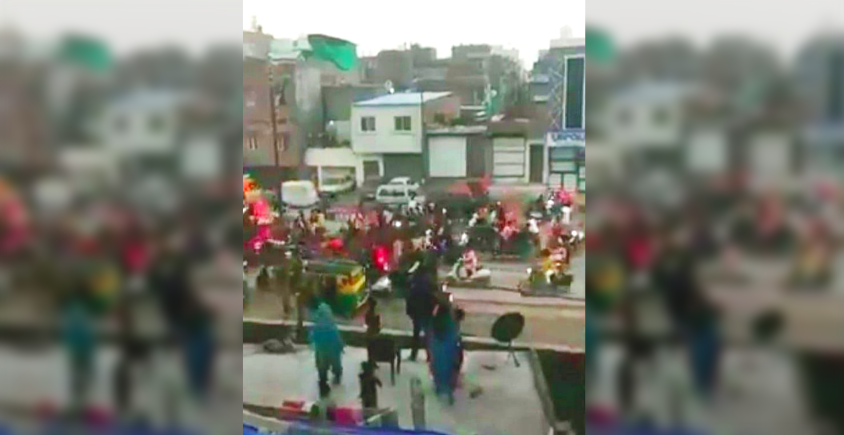 Video screengrab of one of the rallies in Madhya Pradesh.

Bhopal: In the last four days, villages in Madhya Pradesh have been witness to incidents of communal violence, all of which broke out during fund collection rallies for the construction of the Ram temple in Ayodhya.

All processions were led by rightwing organisations from state’s Malwa-Nimar region, a stronghold of the Rashtriya Swayamsevak Sangh and the nerve centre of electoral politics in Madhya Pradesh.

Violence was reported from the Gautumpura locality in Chandan Khedi village of Indore where clashes broke out during the Ram Mandir Nirman Nidhi Sangrah Abhiyan on December 28, Monday. Five people were injured.

Tension gripped Chandan Khedi village when the participants of the Abhiyan stopped in front of a mosque and started singing hymns on the road blocking the movement of vehicles and passers-by.

When some of the villagers tried to pass the rally, members of the Abhiyan objected to their movement, leading to a clash.

The Abhiyan’s fundraising rallies are usually on motorcycles and were taken out between December 25 and 28.

The first incident of communal clash during the collection drive was reported from the temple town of Ujjain.

Stone pelting and a demolition

On Friday, December 25, in Ujjain’s Begumbagh locality, a similar fundraising rally was taken out. It comprised members of the Bharatiya Janata Yuva Morcha (BJYM) and other right-wing organisations. The participants reportedly shouted inflammatory slogans, prompting residents to object to the rally.

The inflammatory slogans quickly escalated into full blown clashes. A day after the incident, the local administration went to the Begumbagh locality and demolished a house and damaged another in a curious bid to remove illegal structures in the area. This was in alleged response to reports of stone-pelting from the area.

On Sunday, a delegation from Jamiyat-ulema-e-Hind Madhya Pradesh visited the areas where the clashes took place and visited the house of one Abdul Hameed, which was dismantled by the Ujjain Municipal Corporation. The delegation urged the local administration to investigate the incident thoroughly and decided to submit its report to the state police headquarters in Bhopal.

Ahmad asked how the rally was allowed to be taken out when congregations are banned due to COVID-19 restrictions.

On the same day, at Dhar which neighbours the districts of Ujjain and Indore, similar clashes took place.

In a letter to the Dhar district magistrate dated December 26, one of the heads of the Dhar Muslim community, Abdul Samad, alleged that the participants of Ram Mandir Nirman Nidhi Sangrah Abhiyan took out a procession in which they brandished sharp weapons and shouted slogans against Muslims.

Abdul Samad’s letter was accompanied by a DVD containing footage of the bike rally and a clipping of a regional Hindi daily which ran the news.

“Most of the two-wheelers had triple riders who carried lathis, dandas and sharp weapons. The riders were shouting offensive slogans and were passing indecent comments on a particular community,” the letter stated.

It further alleged that the rally had tried to disturb the peace in the city by targeting members of the Muslim community, and demanded action against the participants.

“I request you to take cognisance of the rally and legal action against the coordinator, organiser and participants of the rally,” Abdul Samad said.