Despite the UP police's crackdown on protestors, the women are continuing their sit in, undeterred. 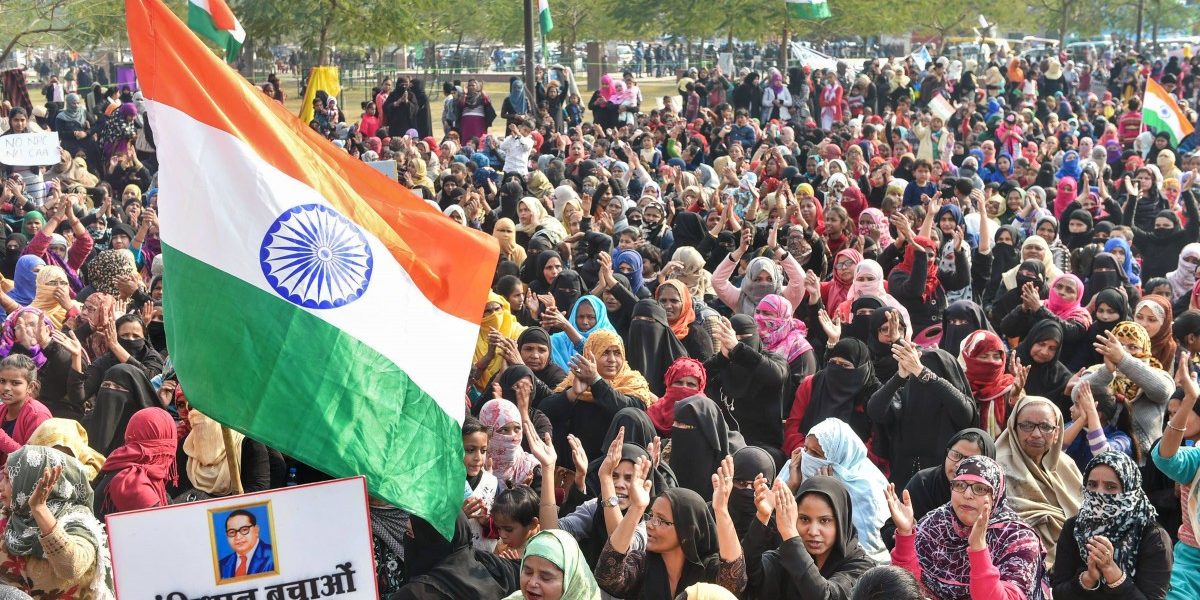 Lucknow: Undeterred by Uttar Pradesh chief minister Adityanath’s loud threats to file cases against them and undaunted by the biting cold, thousands of women are braving it out here to make their voices heard against the Citizenship (Amendment) Act (CAA) and National Register for Citizens (NRC) .

Far from losing steam, as the dharna entered its ninth day under the open skies at Lucknow’s historical Hussainabad Clock Tower, the number of the demonstrators appears to be increasing. Friday’s gathering looked not less than a 8,000-10,000 strong. Significantly, they are neither under a political banner nor guided by any recognised social activist group.

Similar protests by ordinary women have been on in Varanasi, Allahabad, Aligarh, Sambhal and some other UP towns. And despite being charged with the “violation of Section 144” or for “instigation”, the protesters have not given up.

Sprawled over a roughly four-acre stone-paved platform in front of the 19th-century clock tower, these first-time demonstrators in Lucknow refused to get cowed down by Adityanath’s threat to charge them with sedition and imprison them.

“We are just staging a peaceful dharna in this corner of the city; what is most shocking is that simply because we raised this slogan of ‘azadi’, we are being accused of indulging in anti-national activity. How can someone equate our quest for azadi with that of separatists in Kashmir?” asked Sabiha Rizvi, a BCom final year student at a local elite college who defied her family to participate in the anti-CAA dharna. She was referring to the chief minister’s remark that if the demonstrators continued with their azadi slogan, they would be dealt with most severely.

Rizvi goes on to point out, “What we are seeking is freedom from CAA and NRC , besides azadi from unemployment and illiteracy as well as azadi from heinous crimes like rape and dowry deaths.”

Watch: ‘During Anti-CAA Protests, UP Police Fired Shots at Most People Above the Waist’

Well-known former BBC journalist Ramdutt Tripathi feels, “This intimidation by the BJP government is a reflection of their aversion to the word ‘azadi’, because these right-wingers had nothing to do with India’s freedom movement; rather, some of them even joined hands with the British to oppose the freedom movement.” Tripathi compares this protest to what Mahatma Gandhi did way back in 1906 in South Africa, against a new law that prescribed compulsory registration of all Indians, Chinese, Arabs and other Asians.

Meanwhile, emboldened by the chief minister’s offensive attitude against the demonstrators, policemen went to the extent of snatching away blankets brought by volunteers to save the demonstrators from the extreme cold at night. The temperature usually drops very low because of the close proximity of the area to the Gomati river. Blanket snatching was stopped after stories of the “kambal chors” went viral on social media, leading Lucknow’s new police commissioner Sujit Pande to castigate his men in khakhi. But then, civic officials got down to switching off all the street lights in and around the area, thereby plunging it into darkness. They also locked public toilets in and around the area, but were compelled to open them after loud public outcry.

“The Yogi Adityanath government thinks they can scare us through their petty acts of switching off lights at night or by taking away our blankets or locking up the public toilets, but such acts of intimidation are only giving us more strength to fight,” asserts Naish Hasan, a middle-aged social activist. 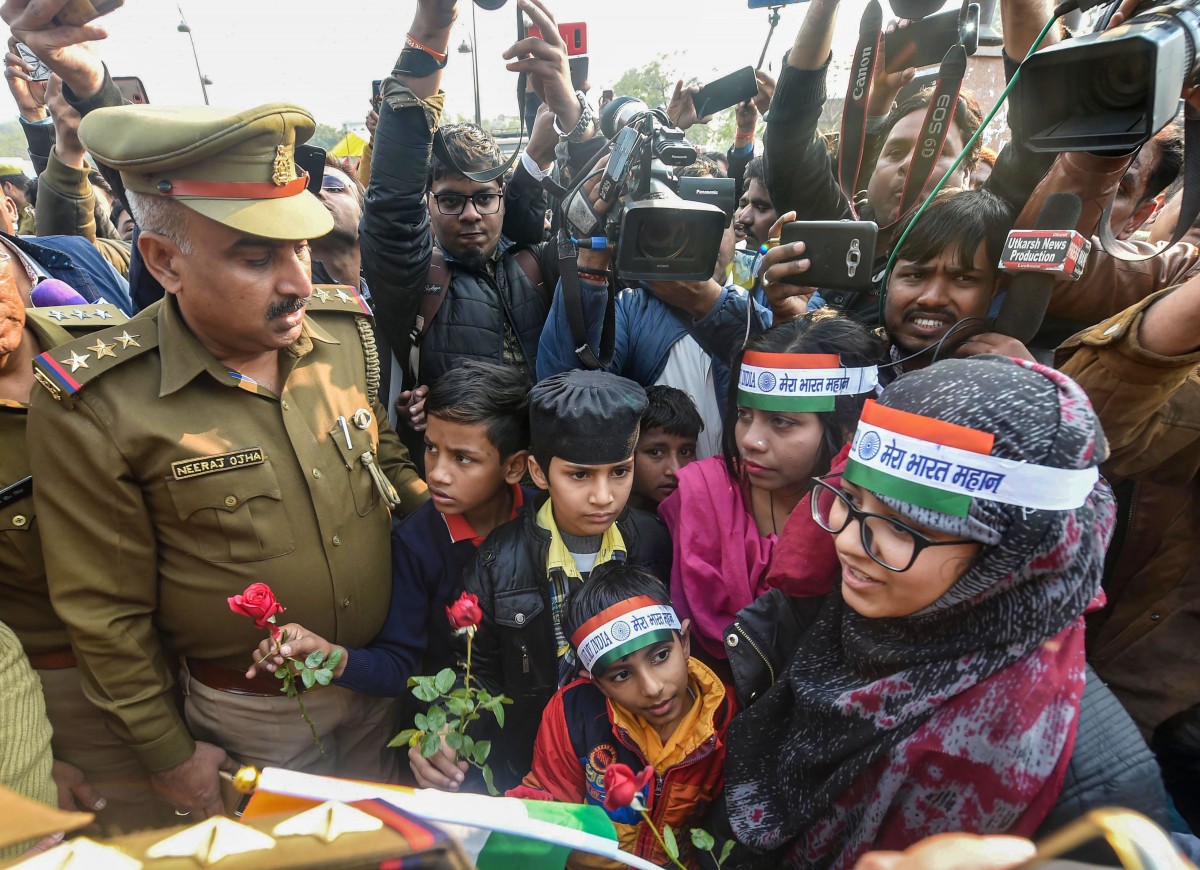 Women with their children at the sit-in protest at Lucknow’s Clock Tower. Photo: PTI

“The government’s oppressive actions have failed to deter these protesting women,” observed former Lucknow University vice-chancellor Roop Rekha Verma, who is a regular at the dharna site.

Seventy-six-year-old Verma, who is widely known for her activism, spends some time every day encouraging the younger lot, whose passion to fight for their rights is incredible. All India Democratic Women’s Association leader Madhu Garg too extends all support to the protest with her team of activists, who make it a point to join the sit-in demonstration every day.

What came as another shot in the arm was the surprise visit by internationally acclaimed Shia scholar and cleric Maulana Kalbe Sadiq, who is also senior vice president of the All India Muslim Personal Law Board (AIMPLB). The octogenarian, who has been battling cancer for three years now, stepped out of his hospital room for the first time to address the demonstrators. Sitting on a wheelchair, he expressed his admiration for the protestors .

“These women have created history by doing what men have not done anywhere. This is the first time that I am witnessing ordinary housewives, young students and grandmothers all joining hands to stage a protest in this Gandhian way. And the manner in which Hindu, Muslim, Sikh and Christian women and young girls have joined hands to stage a round-the-clock demonstration braving the cold weather under the open skies is unparalleled,” he said.

He went on to tell the protestors, “My advise to you all is to not get cowed down by any kind of oppression or threats; maintain peace and calm and do not give up. I can assure you that victory will be yours once day.”

Reacting to Union home minister Amit Shah’s declaration at a public rally in Lucknow that he would not withdraw CAA or NRC under any circumstances, Sadiq hit back, “If you don’t take back this law, then these demonstrating women, these children will unseat you once day.”

In his feeble but firm voice, he went on to add, “Don’t get disheartened by adversities and intimidation; remember every night is followed by a morning.” He also flayed a UP minister for his saying “if these anti-CAA protestors do not listen, we will teach them a lesson that their future generations will remember.”

Less than 24 hours after his visit to the dharna site, Sadiq received the government’s retort. His son, Kalbe Sibtain, has been booked for “unlawful assembly” and “instigation”. He had visited the dharna a day earlier.

Also read: A New Politics – and Aesthetics – of Protest Is Coming to Life in Kolkata

The UP government had been extremely harsh on anti-CAA protestors when they undertook their first demonstrations last month. Not only were thousands of protestors arrested and put in jails in different parts of the state, but about 17 protestors were killed in police firing. Yet, many of those who suffered were seen joining the dharna at the Clock Tower. These include activists like Deepak Kabir and Sadaf Jafar, who faced police violence and brutality, besides spending weeks in jail. Jafar’s crime was that she had dared to ask the cops why they were not arresting stone-pelting mobs, while Kabir was put in prison because he went looking for Jafar at a local police station.

That some policemen were trying to be more loyal than the king became glaringly obvious when they hauled up boys flying black kites and beat up others playing with black balloons. There was utter disregard for the fact that displaying black flags or sporting black bands is the most passive form of protest in a democracy.

While everyone wonders whether we are heading towards a police state, popular public support to the peaceful demonstration is becoming increasingly visible. Citizens are busy offering food, water, blankets and other essentials for the protestors. Some battery-operated lights have also been donated for the safety of demonstrators at night.

It would not be unfair to assume that the dharna has turned into a mass people’s movement in Lucknow – something that must be making Adityanath and his government very uncomfortable.

Sharat Pradhan is a senior journalist in Lucknow.