The Muslim man had been accused of 'love jihad' in spite of a video message released by the Hindu woman saying she has entered the relationship willingly. 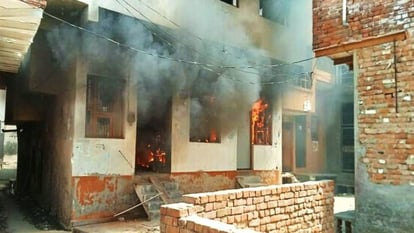 New Delhi: Eight people were arrested after Hindutva workers set two houses on fire in Agra. The houses belong to the family of a Muslim man who had been accused of “love jihad” in spite of the Hindu woman in the relationship saying in a video that she had willingly gone with him.

‘Love jihad’ is a phrase coined and popularised by rightwing Hindutva groups alleging an unproven conspiracy led by Muslims to convert Hindu women into Islam through marriage.

The attack, on Friday, April 15, was carried out by members of the Hindutva group known as Dharam Jagran Samanvay Sangh.

A police post in-charge was suspended for negligence and a probe ordered against the local station house officer.

Police said the mob torched the house in the city’s Runakta locality, where Sajid Qureshi, a gym owner, stayed. An adjoining house belonging to the family was also set on fire.

The mob demanded his arrest for “kidnapping” the woman, who police claimed is 22 years old but “still in school”, according to PTI. The woman’s father, reports have said, told reporters in Agra his daughter was a BA student at a college in Mathura.

The woman’s family members had lodged a missing person’s report, prompting a police search. On the basis of their complaint, a case was also registered under section 366 of the Indian Penal Code. The section relates to kidnapping of a woman with the intention of compelling or seducing her into sex or marriage.

Journalist Mohammed Zubair has tweeted that following threats, Sajid and his family left the house. As a result, there was no one in the houses when they were set on fire.

PTI has reported that the woman was traced by police.

Ritika's family members, RW and locals alleged that Sajid had kidnapped the minor four days ago and demanded his arrest. Sajid's family had locked their house and had gone elsewhere because of constant threats. At the time of the incident, no family member was inside the house. pic.twitter.com/jUYpAkLtVB

But in a video that surfaced on social media, the woman said she is an adult and had gone willingly with the man, according to police.

A video later emerged on social media in which the woman could be heard saying that she had gone with Sajid out of her own will and that no one else was responsible for the decision. pic.twitter.com/hmbrh17Esk

He said police will produce the woman in court and could not do that so far because of the court holidays.

The local police post in-charge was suspended after the incident for negligence and an inquiry ordered against the Sikandra station house officer.

“If found guilty, action will be taken against him as well,” the SSP said.