A policeman said they are being stopped as there is 'tension in the area', but refused to explain any further. 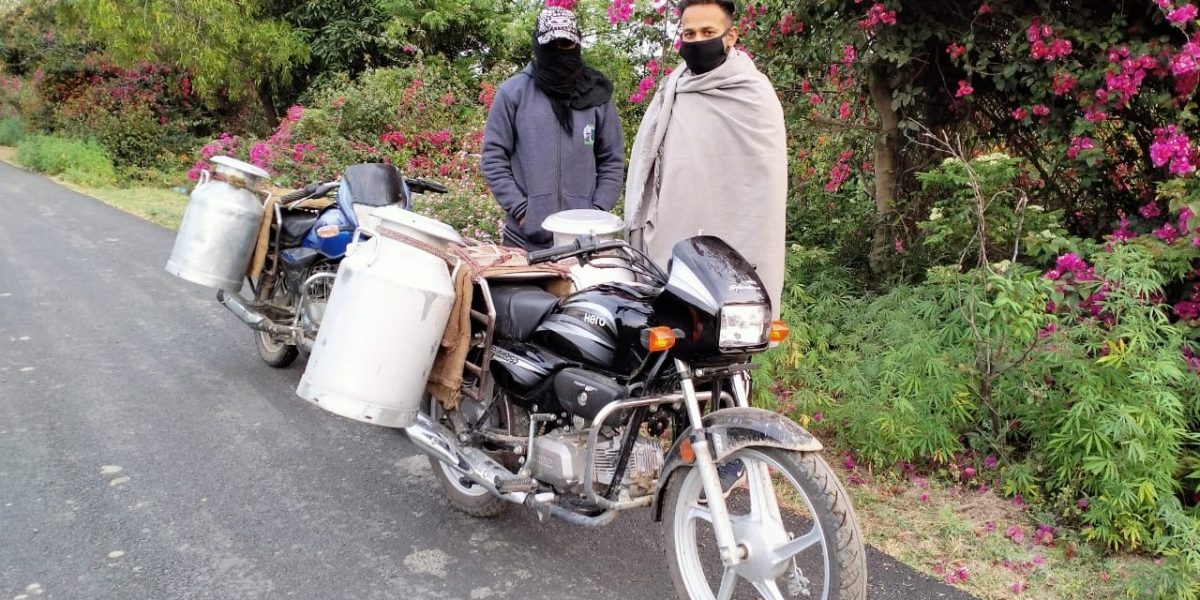 Terrace Chowki, Dehri (Himachal Pradesh):On April 14, Sadiq stood at the Sansarpur Terrace border check post from where he has regularly crossed over to Himachal Pradesh from Hoshiarpur in Punjab for over a decade to supply milk to his long-time customers. But the Himachal policeman, who was standing at the check post with an entry register in his hand, denied him permission to cross over, shaking his head in warning.

One could be forgiven for thinking that Sadiq and fellow Gujjar Yaqub Ali were not being allowed to cross over because Himachal, like the rest of the country, was in a state of lockdown. However, that did not explain why the policeman was allowing non-Muslims to cross over to the Himachal side to sell vegetables and milk but denying permission to the Muslim Gujjars to do so.

When The Wire pointed this out, the policeman replied, “You better talk to the chowki in-charge, I will give you his number.” Seeing that this correspondent was taking photographs, a look of annoyance crossed his face. “Don’t click any  pictures here, we are on duty,”  he said testily.

After  entering the details of our vehicle in his register, the policeman waved us on.  At the chowki (police station) a kilometre ahead,  the conversation with assistant sub-inspector (ASI) Sanjeev Kumar proceeded smoothly until he was asked why they were allowing non-Muslims to cross over but holding Muslim Gujjars back.

Kumar replied:  “There’s a  lot of tension in the area”.

What kind of tension? I asked.

Then Kumar put the onus on the tehsildar (revenue officer) of  Dehra, saying that “all  milk vendors need written permission” from the tehsildar.

When The Wire contacted Dehra tehsildar Amit Rana, he said he was issuing passes only to the local milk vendors of Himachal. ”You can ask the police, we are not stopping anyone,” he said.

As one halted some distance away to converse with a man who was waiting for his Gujjar milk vendor to cross over from the Punjab side, ASI Kumar and his three colleagues appeared on motorcycles and told this correspondent, accompanied by another local journalist, to leave.

Our brush with the police was not over yet. As we turned back we were stopped at the chowki again and ASI Kumar threatened to  book us  “for stopping the police from doing its duty”.

Their behaviour and their attempt to prevent The Wire and another journalist from talking to locals around the Sansarpur Terrace check-post was in clear violation of the Ministry of Information and Broadcasting advisory to all states and union territories, dated March 23, 2020 (No. E-36011/8/20-BP&L), that the work of the media be seen as an essential service.

It was only after the intervention of Kangra inspector general of police (IG), Santosh Patial, who was contacted by this correspondent, that the situation was defused.  When the IG was apprised of the matter – of  Muslim Gujjars being prevented from crossing over to Himachal at the Sansarpur Terrace checkpost to reach  their customers – he  said he would look into the matter.

“I will inquire and make sure that no such discrimination happens,” IG Patial told The Wire.

On April 19, Farman Ali, who is based in Hajipur, in Hoshiarpur district, told The Wire that all his efforts to connect with his customers on the Himachal side have been in vain. Even though he and members of his community have valid curfew passes, they are not being allowed past the Sansarpur Terrace chowki on the Punjab-Himachal border.

“Every day we plead with the policemen to give us access  to our customers in Himachal, but the policemen at the check-post  tell us we do not have the permission to cross over,”  Sadiq told The Wire. He further stated that non-Muslim milk vendors (including Sikhs and Hindus) are moving freely across the border check post to supply  milk in the adjoining areas of Himachal Pradesh.

Long-time customers of the Muslim Gujjars are also in a fix. Jagdish Kumar, a dairy and sweet shop owner in Daulatpur, 15 km from the Terrace chowki, had even given a signed letter saying that Farman has been supplying milk to him for the last six years, in case the Himachal policemen stopped Farman (Jagdish wrote this letter when, following the Tablighi Jamaat incident, the policemen on the Himachal side started denying the Muslim Gujjars permission to cross over).

Jagdish’s letter has not made the slightest difference. When contacted by The Wire, Jagdish said, “I purchase 1 quintal (100 litres) of milk from Farman, and this milk is supplied to 20 houses. But he is not being permitted to cross over.”

He also added, “Those who purchase milk from me know that it comes from the [Muslim] Gujjars, but they are still waiting for them.”

At his wits’ end, Jagdish asked this reporter to intercede on his behalf: “Can you please ask them [the policemen] to allow Farman to cross over? He needs just half an hour to supply the milk here” (a copy of Jagdish’s letter to Farman is embedded in the story).

Farman told The Wire that two days back he took another route, riding his motorcycle an extra 20 km, and managed to enter Himachal from the Marwhari chowki to deliver the milk, but on the way back the Himachal policemen told him to make himself scarce if he wanted to avoid getting arrested.
“They [the policemen at Marwhari] told me never to show them my face again, said Farman. 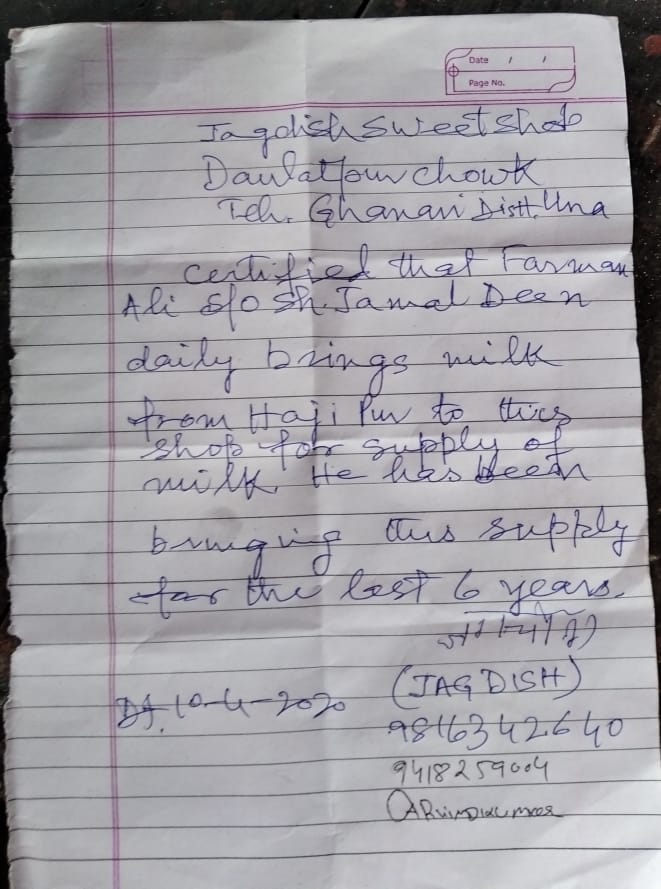 The letter Jagdish Kumar wrote for Farmaan was of no use.

Sadiq too has his own story to tell. Since he is not being permitted to enter Himachal, one of his regular customers, Tony, who lives in Sansarpur Terrace, has taken to crossing over to the Punjab side. He walks to the Swan riverbed, where Sadiq and other fellow Muslim Gujjars who have been driven away are staying at present, to buy his five litres of milk from him. “ I tried to reason with the ASI (chowki incharge Sanjiv Kumar) to allow Sadiq to cross over, but it was of no use,” Tony said.

According to Sadiq, “The (Hoshiarpur) administration is asking us to apply online for e-passes, but most of the Gujjars are illiterate and do not even have smart phones to do what is needed.” A member of the panchayat in Patti Ram Nagar village, near Hajipur in Punjab, he is now running from pillar to post to get an e-pass made from the Hoshiarpur district administration so that he can sell his supply of milk, which is an essential commodity.

“We were not even aware of any such formality,” Sadiq remarked, adding that they had no problems supplying milk to their Himachal customers for over a week after the lockdown. “The problem began only after the television channels started making a noise about Tablighi Jamaat,” he said.

He is equally worried about the fact that following an announcement in Khunda village near Hajipur “a few days back after the Tablighi Jamaat incident in Delhi” the Gujjar Muslims in that area were being stigmatised. He wondered where it would end.

On the one hand, the Government of India as well as state governments have announced that the lockdown will in no way impede the supply of essential items like groceries and milk. But when the virus of communal stigmatization raises its head in the midst of a pandemic, will the distress of people like Farman and Sadiq be heard?