As Kerala's Men Push For 'All Against All' War, Women Provide the Antidotes

How the women of the Muslim League and nuns are ushering in a new debate on issues of gender equality and making hope possible in a state of despair. 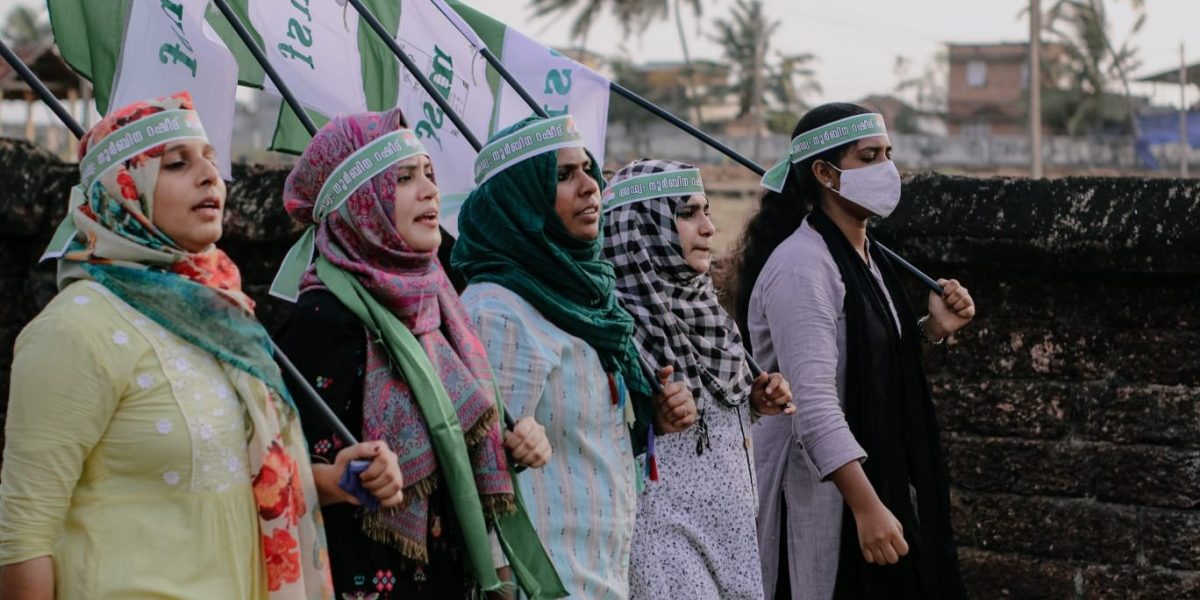 While the last word on how Kerala as a state managed the COVID-19 pandemic will have to wait, one thing is largely felt: Kerala economy is likely to be among the worst hit due to this crisis. This is not surprising given the state’s economy has been deeply entwined with the global economy for the last five decades, be that export of human resources or tourism.

With the pandemic putting global capital under suspension and its implications in one’s life – in terms of shrinking of economic fortunes and thinning down of opportunities – people have been driven into a state of insecurity and desperation.

There are two ways of responding to such a situation. The constructive way would be to formulate projects and reorganise channels so that, as a people sharing a common destiny, a solution could be found through a social approach. The second is cynical and commonplace in the majoritarian grammar of political organisation: invent external enemies and concoct fears to create a sense of community.

Kerala’s men seem to have chosen the second, and the outcomes are rather alarming.

The Bishop of Pala, Mar Joseph Kallarangatt, was in the news recently for making a case for “narcotic jihad”; the allegation that young Muslim men are trapping Christians by getting them into substance abuse in order to convert them into Islam. The Bishop has been criticised for creating fear and enmity between two communities, and it has been pointed out that he has bothered neither to explain nor substantiate his wild allegation.

Men, at the helm of all political parties, have condoned Kallarangatt’s position: the Bharatiya Janata Party, understandably, decided to extend their support to further such allegations, while the ruling Communist Party and the opposition Congress party have both paid visits to the Bishop rather than demand details or condemn such a callous and dangerous statement outright.

This is not surprising given the community arithmetic of the state: Christians have evolved to be the most important political community. In a state where Hindus are only half of the population, without either Muslim or Christian support, there is no way in which the BJP can ever come to power. The North East model of Hindu-Christian alliance is their only hope. The Congress-led United Democratic Front (UDF) loosely had the social base of Muslims, Christians and Nairs through alliances with communitarian political parties. Due to the Nair vote-base shifting to the BJP, Congress has no hope without getting back Christians, who have shifted sides to the Left in the last assembly elections. The Left is aware that, with its largely Ezhava and Dalit votes, in addition to the party votes that cut across communities of religion and caste, it could be re-elected to power because of the Christian votes, and losing them could turn out be damaging.  So the male leadership of Kerala parties decided to somehow keep the Bishop with them, rather than engaging with the statements.

Much of the evidence that has surfaced shows that “narcotic jihad” allegation is just one among the many dangerous conspiracy theories that float around in these spaces. This allegation of alluring Christian women doesn’t seem to be limited to Muslim men alone. Another parson, Father Royi Kannanchira of Changanassery, in a training programme for teachers has warned believers against the mysterious plans of Ezhava men. The insecurity of Kerala’s dominant communities and the resultant arbitrariness of public debates are such that any such wild allegation is lapped up immediately, with cyber warriors lining up on both sides.

One major provocation for enmity between Kerala Muslim-Christian communities was an article by the Indian Union Muslim League leader Sadiq Ali Shibab Thangal in the Muslim League mouthpiece Chandrika, supporting Turkey President Recep Tayyib Erdogan’s conversion of Hagia Sophia museum into a mosque. This went against his own party’s stated commitment for communal harmony and was completely out of tune with a party that stood for minority rights when the Christian minorities of Turkey – which would also make the Christian minority of the state anxious and feel alienated – were at the receiving end. Thangal’s position supporting Muslim majoritarianism elsewhere contributed to the growing apart of the communities in the state. The Taliban capturing of Afghanistan has also contributed to communitarian divide in the state.

The Malayalam social media space is filled with hate messages, making it a war of all against all. Newspapers and TV channels are too scared to address any such issue because criticism of any dominant community is treated with a boycott of the media house by a large section of the community. More so, politicians keep custodians of community vote banks happy regardless of long term implications. What is on display is a tragic farce.

Kerala has four dominant communities, all of whom should be counted among the most powerful communities in socio-economic, demographic and political terms in the entire country: Ezhavas, Muslims, Nairs and Christians. All four emerged significant through communitarian social development – the practice of each community growing in the educational and economic sphere through intra-community work – without any social antagonism against other communities, and hence working as tributaries to the state’s common growth. In most cases, this growth necessarily entailed community reform as well. All four have also benefitted substantially from Kerala’s journey of economic growth over the last half a century.

But this model, a remarkable possibility, started turning into a liability when community leadership, in the interest of the rich businessmen and powerful politicians, started using the institutions for extracting the wealth brought in by foreign remittances. Financial corruption became naturalised in the educational institutions of Kerala. While being hyper capitalist and plutocratic, the state stayed incorrigibly feudal in attitude and the political rhetoric was all socialist, thanks to long and effective political action and education by the Left.

There were three casualties for this state apportioned by the dominant communities: women of all sections, who have been exploited by the capitalist economy as well as feudal social system; Bahujan groups, who have been systemically denied the economic, educational and political capability and the all-too obsessively exploited ecological system.

Communitarian antagonism always uses women as the site of a community’s honour and hence controlling women’s bodies and restricting female spaces is in its very DNA. But quite encouragingly, women of both the Christian and Muslim communities have recognised this male design and are standing up resolute to be heard.

Where male politicians and community leaders hesitated and feared to respond to the hate mongering in the church masses, the nuns of Kuruvilangad, under the leadership of Sister Anupama, walked out of a church service saying the priest was making anti-Muslim remarks during the speech in the church. Sister Anupama was earlier in the news as part of the legendary protest on the street against Bishop Franco Mulakkal for sexual exploitation. They categorical said “no” and “not in my name” to the male leadership, all over again to the male matrix that claims the community’s ownership.

Also read: In an India Where Minorities Are Singled Out for Abuse, Is Another Politics Possible?

At the same time, Haritha, the young women’s organisation of the Indian Union Muslim League, is ushering in a new debate on issues of gender equality in Kerala. What started as an intra-organisational issue of a member in the male wing slut-shaming the office bearer of the female wing in a meeting of office bearers has gone on to become a compelling debate on gender justice. The senior male leadership has taken the drastic step of dismissing the entire state committee of Haritha and of removing the National Vice President of Indian Union Muslim League’s student body, Fathima Thahliya, for supporting the young women of Haritha.

The disbanded state body, led by Najma Thabashira and  Mufeeda Tesni, have decided to take the male leadership of the party head on and have gone public with it, including filing a complaint with the Women’s Commission. These women give a wonderful sense of sorority, question the gender biases of both the party and the society and claim a tradition of women’s political work connecting often side-lined women – from Gauri Amma to Haleema Beevi – and push the agenda of constitutional nationalism with the historical content of gender justice. Their fight “in the party against the party for the party” is giving a sense of direction to the male-ego induced heedlessness to the political debates of Kerala.

When men, in their fear and absolute lack of political imagination or ethical commitment, work to make despair convincing, the women’s antidotes to these male designs make the hope possible that there is a more egalitarian, inclusive tomorrow to work towards.