Killings may be condemned, but what about those who have been turned into living dead? It appears sympathy is hard to come by, for them. 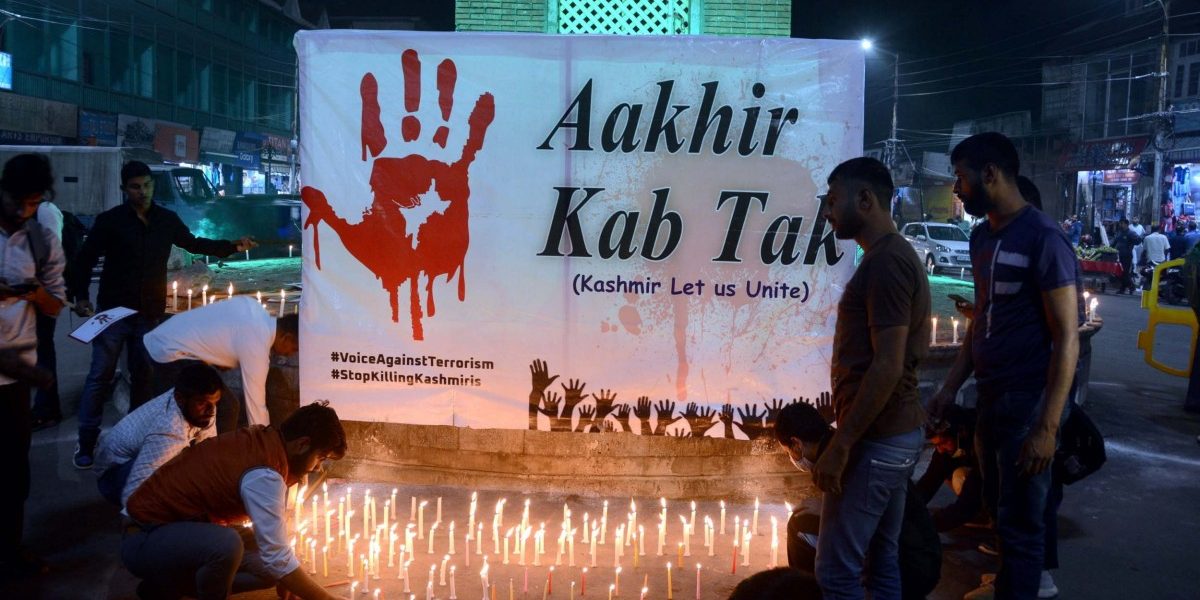 Kashmiri Pandits take part in a candle light protest against the killing of 3 persons including pharmacist ML Bindroo by militants, at Ghanta Ghar in Srinagar, Wednesday evening, Oct. 6, 2021. Photo: PTI

It is reassuring to know that appeals have been made from Srinagar mosques to Muslims to stand in solidarity with Sikhs and Kashmiri Pandits. This came after the killing of a reputed Kashmiri Pandit chemist, Makhan lal Bindroo, a Bihari vendor, a Sikh school principal and a Hindu teacher. The funeral of the Bihari vendor and the Sikh teacher went unattended by Kashmiri Muslims. This was noticed by some among the latter community, who lamented the lack of empathy towards the Valley’s minorities. The terrorists’ nefarious goal of driving a communal wedge in Kashmir must not be given space to succeed.

While the GOC of the Chinar corps, Lt General D.P. Pandey, said that certain elements were attempting to divide society on communal lines and that people will expose such elements – a comment which reflects prevailing sentiment in the Valley – he went one step ahead and added that such elements were jealous of the positive developments in the country and the union territory over the last year.

One fails to understand why soldiers have become political spokespersons. Of course, he did not spell out what these positive developments were. Presumably he did not have in mind the recent developments in Lakhimpur Kheri or Indore or Kawardha.

Leave the general aside, even other people are concerned about terrorism taking a communal turn. So long as it killed only Muslims, there was no special cause for worry. After all, Muslims were killing their own.

An organisation has now emerged claiming responsibility for the attacks. It claims that Bindroo was killed as he was a spy for the RSS – an outrageous and contemptuous charge, not only his daughter and son, but others who knew him say. But even if he was associated with the RSS, it does not justify his killing.

His son asks a question lost in the nationalist din of the media: there were reports of a possible attack on him for quite some time so why was he not given security by the state? Was the government not interested in protecting his life?

The truth about such killings has been buried deep in some unmarked grave in Kashmir, where it is guarded zealously. But we do know about the killings by the Indian security forces. They are done using many pretexts. Disobeying a halt order or arguing with an Indian official can prove to be fatal for a Kashmiri Muslim. The young are always suspected, and suspicion can legitimately lead to eliminating them. After these killings, a Muslim Kashmiri, Parvez, was shot dead by the Indian security apparatus. All these killings are mourned by Muslims; they do not have other Indians joining them nor does the media ask questions about this wider silence. They are paying for their own sins, is the argument.

Even then –  even when they are being persecuted, humiliated and insulted every day, even when the Indian state throttles them into silence – the Kashmiris must find the little voice of humanity lying deep within and dredge it up. They must not lose the ability to mourn the loss of those who may not be like them, even when their own losses remains unmourned. This is their way of telling the Indian state that it has not been able to debase and dehumanise them totally.

For the rest of us, we must struggle to find a language to talk honestly about Kashmir. When I learnt about the killing of a Sikh and a Hindu teacher in Kashmir, my mind went to my student who is teaching at a school somewhere in the Valley. He is a Hindu and in the last two years has been pained and anguished by what’s being done to the Kashmiri people by people like him or in his name. I heard his quivering voice, could feel his sense of helplessness. He talked about the challenges his Kashmiri students face in taking the online classes. He was particularly pained by the loss that his students had suffered when the internet was shut down for a long period after the downgrading of the state and its dismemberment. He realised that he needed to know the people and the culture more to be able to teach better.

When I heard about the killings, I shuddered to think that his name could have made him an ideal target. That he is safe as a matter of chance is a very disquieting thought.

To be truthful, we cannot say with confidence who the planners and killers were this time. But the objective was very clear – to drive fear in the hearts of Pandits and outsiders, and create more distance between the Muslims of the Valley and the non-Muslims including Sikhs who have been sympathetic to them in the time of violence against them.

Add to it the implication for Muslims in India. Even if most of them distance themselves from Kashmiri Muslims, the violence against Indian Muslims is justified by taking the name of Kashmiri Pandits. When an Akhlaq is killed or a Junaid murdered, the crimes are sought to be downplayed by speaking about the violence against Kashmiri Pandits. The absurdity of this line of thinking never hits us. So, it is natural to think that this spurt of violence, especially the targeting of non-Muslims, will make Indian Muslims more vulnerable to violence. Or, more aptly, these incidents will be used to justify further violence against Muslims.

Watch: ‘Wrong Is Wrong and Wrong Has Been Done’: Sidharth Bindroo on His Father’s Killing

The question, however, is are Kashmiris left in a state where they too can have the kind of discussions that we are having? Will a Kashmiri voice be able to find an Indian ear? Who knows better than them what violence means. When you see a part of your identity chipped away every day, legally, lawfully, even you forget that this too is violence. It is easier to condemn killings than to find sympathy for those who have been turned into the living dead.

Despite everything they’ve been through and continue to go through, the Kashmiri people need to assert that they are alive. The idea of freedom cannot be tainted by the ideology of exclusion and elimination.