How Much More Blood Do TV Anchors Want to See Spilled?

Some TV channels deliberately spread a made-up story of how the Muslims of Kasganj were protesting against the national flag. 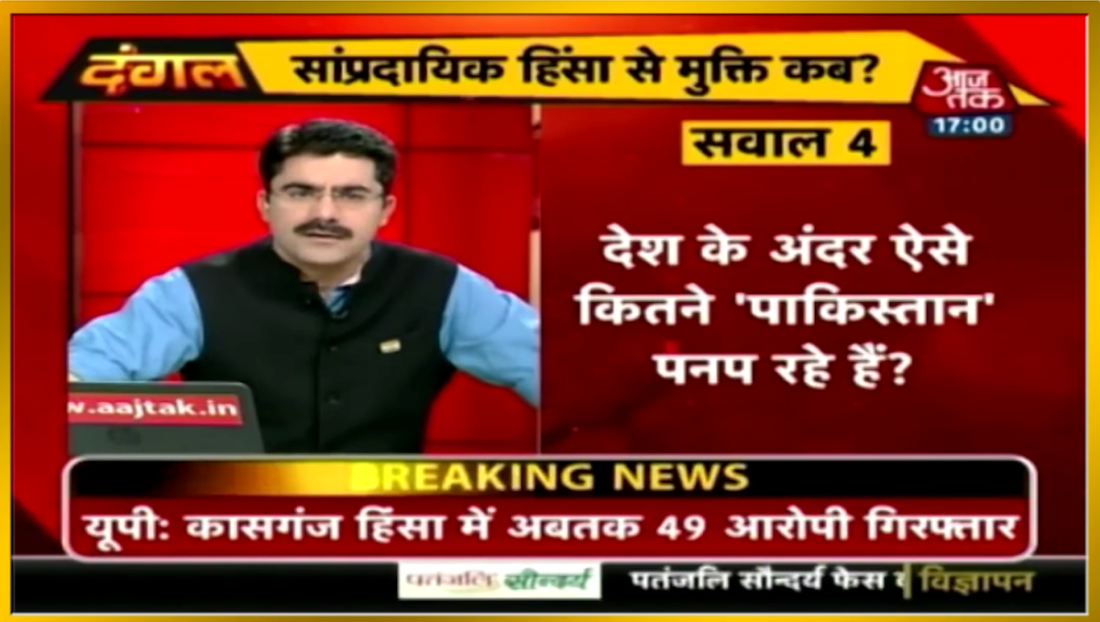 Screenshot of AajTak, whose coverage of the Kasganj riot has been criticised for displaying bias. 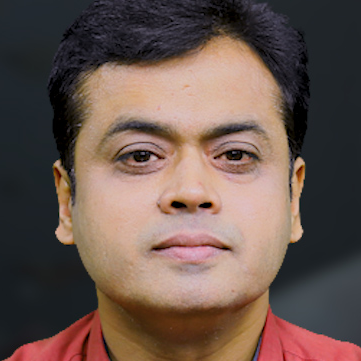 ‘They justified the killing of Hindus!”
“They ask — how dare the tricolour yatra be taken out without permission; why raise incendiary slogans like Bharat Mata ki Jai in the first place…”

These are the kind of intemperate posts that are being published about Pankaj Jha and me in a Facebook page titled ‘Dainik Bharat’, which is in the business of spreading rumours and inciting riots. The rumour machine is working overtime and an indiscriminate public is under its sway. The state of affairs is such that journalists who are bringing you the facts are being threatened with death. So much so that even their families are not being spared.

Pankaj Jha travelled to Kasganj and produced a report on the incident that had transpired there – without any hype and without blaming anybody in particular. The results of that are there for you to see. Read what he has posted on his Twitter account:

“Since morning I have been receiving one telephone call after another from a certain type of people who vilify me, threaten to kill me and provoke me by saying they will kidnap my daughter. They ask, do we now need permission even to take out a tricolour procession? But the person who said so was the DM of Kasganj. Shouldn’t this question be posed to him? In all my years of journalism I never imagined things would come to this pass. I have stopped taking calls from these telephone numbers. You want to know why — because what comes from the other side is a fusillade of abuse and threats to shoot me down.”

The threat to kidnap a journalist’s daughter marks a new low. Any Hindu-Muslim conflict takes place in an explosive atmosphere of heightened tension and emotions. One inflammatory statement is like throwing a burning matchstick in a tinderbox. If such attempts to vitiate the atmosphere were the handiwork solely of some extremist organisation, it would still be understandable. In this instance it was mainstream journalists who conveniently dispensed with facts to present a patently false picture of the incident before the people of the country.

Pay attention to this one TV news anchor’s hectoring statements/questions:

Note the tenor of the third statement/question – who are the real enemies of the tricolour in Kasganj? The Muslims too were waving the national flag – why was this fact hidden? This fact has been confirmed by pictures and by the statements of IG Thakur himself. You don’t even need to do some great investigative journalism for it.

The administration has admitted that permission had not been granted for the tricolour procession. However, the anchor of that news channel conveniently branded a specific community as Pakistani on day one itself.

When the atmosphere is rife with tension as it is, what is the need to bring Pakistan into the debate? For whose political benefit are such statements being made?

The matter does not end there. There is no apology forthcoming even after the lie has been caught. No action is taken against those who willfully spread falsehoods. A journalist belonging to the same flock went so far as to declare dead a man who is alive and well, bless him. But on social media, what made waves was the ‘news’ that along with Chandan Gupta, one Rahul Upadhyaya too fell victim to bullets fired  during the clash.

Since when has the media started dealing in erroneous statements, plain lies and partial facts, that too with regard to a communal clash? It is not that the media is error-proof but to do so deliberately is another matter. Is it not true that the news channel in question had to send another reporter to Kasganj to rectify its earlier version by filing a new report – a report that is exactly the opposite of the earlier programme of falsehood? If what you said then was the truth, why didn’t you stick to it? That is because the television news channel in question knows it committed a mistake. Except it is not an ordinary mistake.

Through your programme you have ensured the spread of an entirely make-believe protest against the Indian national flag by the Muslims of Kasganj. The consequences of this anchor’s lie will not be borne by members of just one community; the hatred that is being sown will be reaped by anybody who is touched by it. The raging fire of communalism is not in the least selective; it doesn’t ask for someone’s religion before burning his house down. Its fury is democratic – it devours everybody equally.

Journalists like Pankaj Jha and I also happen to be among those who are bearing the brunt of this anchor’s lie. I challenge you to prove that Pankaj and I have held Chandan Gupta’s killing to be justified. Whatever we had to say is out there in the public domain – in our reports and blogs.

We were only interested in being factual, as it should be. The question however is this: what is the accountability of the kind of news anchoring that fans violence in society? By keeping Hindu-Muslim tensions on the boil, whose political vested interests are they promoting? Did the District Magistrate of Bareilly, Raghavendra Vikram Singh, not ask as to why such processions were taken out through Muslim dominated neighbourhoods and why such inflammatory slogans were raised? Let me clarify once again that Bharat Mata ki Jai and Vande Mataram are not provocative slogans, but to enter that neighbourhood and raise taunting slogans about Pakistan most definitely is.

For that matter, did the Uttar Pradesh governor, Ram Naik, not describe the Kasganj riots as a blot on the state? Now what do you have to say about him? We can’t dub him anti-national, can we?

The problem is that reporting on communal clashes is becoming more and more difficult by the day. In a conflict between two communities, there are those from the majority community who want the media to declare the other community as eternal villains of the piece.

The thing is, reporting by its very nature cannot be majoritarian. It is true that Chandan Gupta was a Hindu, but that is no excuse for you to broadcast a lie and vitiate the atmosphere even more. How many more Chandan Guptas do these anchors want to see sacrificed?

Most importantly, you are not even speaking in the interest of Hindus. You are just an unofficial spokesperson of one particular political party. By fomenting tensions between Hindus and Muslims you are merely carrying out that party’s political agenda.

Spoiling the atmosphere, spoiling the peace – is this your idea of love for your country? Your desire that the country is kept on the boil – is this your idea of patriotism? Why are you intent on distracting the people, drawing their attention away from fundamental issues such as farmers’ woes, the concerns of employed sections, and the failures of the government? For a moment let’s accept that you are a hanger-on of the political party in question. However, by fomenting instability in the country how are you helping to make Modiji’s dream of ‘Make in India’ become a reality? Demonstrate your political loyalty skillfully at least.

If extremist groups are entering the political mainstream, it is because they know a sizeable section of the media, commanding a huge audience, is willing to project them. There is nothing cloak-and-dagger about the crimes committed by these groups either; on the contrary, they capture their misdeeds on camera because they know a part of the media is all prepared to derail the issue by showing them as the victims.

By providing a platform for such groups you are putting the lives of ordinary Indians in jeopardy, toying with our children’s lives and their futures. You are not just indulging in dishonest journalism but also committing injustice against the country’s most important and fundamental unit – our families. You are attacking their peace of mind and well-being. Both as a journalist and as a father this is completely unacceptable to me.

The writer is a senior television journalist with ABP News. This article was originally published on his Facebook page.