Fighting for Peace Amidst Manufactured Hate, 'Karwan-E-Mohabbat' Reaches the Capital

The Karwan today reached Delhi to meet thousands of people, including widows of the 1984 Sikh massacre, before proceeding to Gandhi's samadhi. 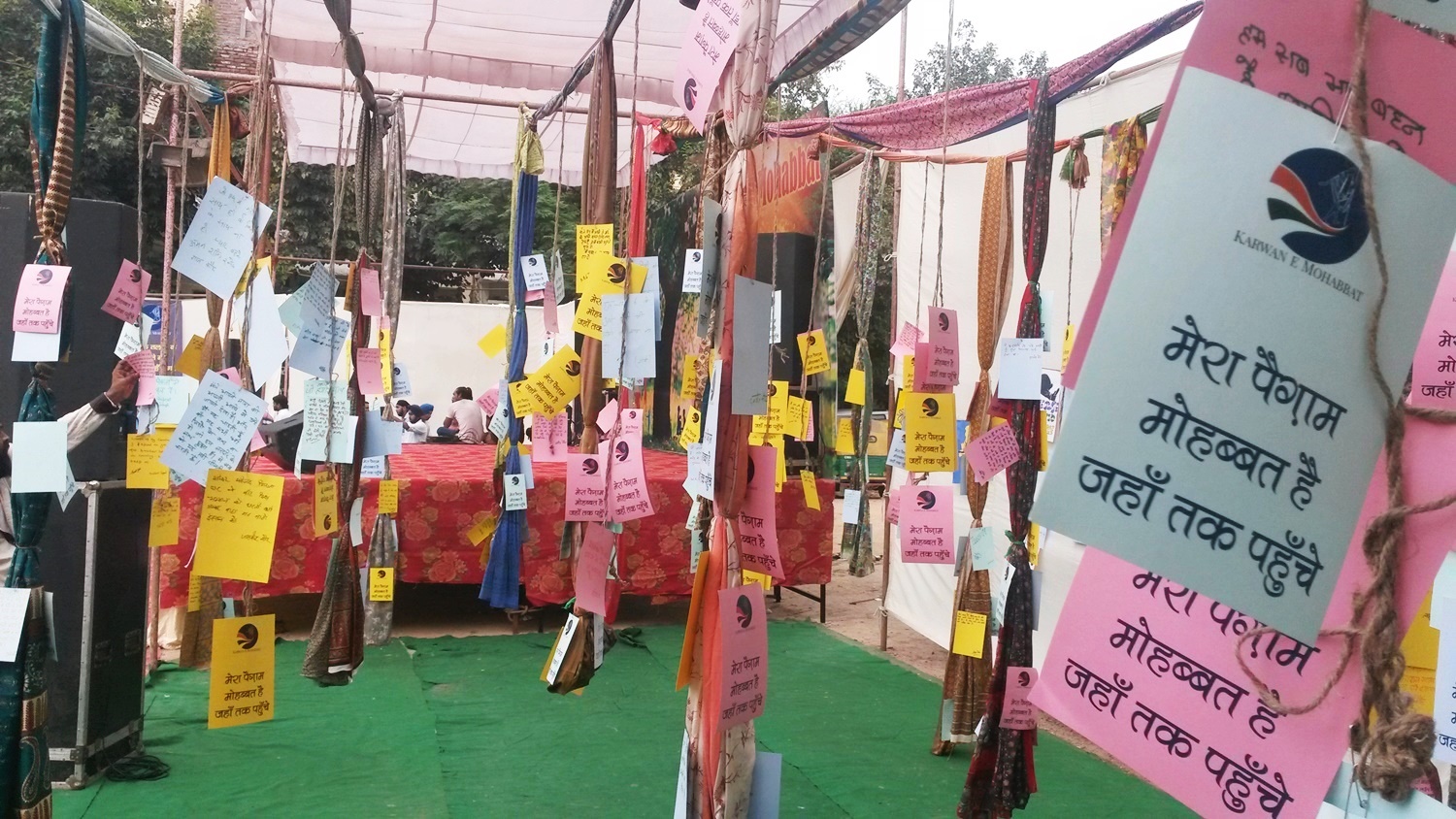 Reading stories of hate crimes committed in the last few years is stomach-churning. It revives nightmares of reporting in Gujarat 2002. A report we wrote called ‘the Survivors Speak‘ recorded the atrocities, rapes and genocide. We’ve all read similar stories about Rwanda and Kosovo. Not just gory murders but gruesome, vile, heinous new methods of torturing victims. The ‘selfie’ addicts cannot resist gleefully video recording their crimes. They delight in recording their victims last moments, the blood, the anguish, the pleading for their lives to be spared.

It’s why Harsh Mander, former civil servant and activist writer, and his ‘Karwan e Mohabbat‘, feel it is important to stop the spread of hate in any form. Suspicion, distrust and generic hatred for the ‘other’ were not a part of the Indian psyche in spite of sporadic riots, even a decade ago.

When the BJP came to power under Atal Bihari Vajpayee, I thought ‘great. We need a strong opposition.’ There were several brilliant minds with the BJP then. ‘That will also help the country,’ I reasoned.

Yet, coming face to face with the massacre of Muslims in Gujarat in 2002 uncovered the fact that this pogrom was a cold blooded, well thought out, pre-planned affair. The question that came to my mind most frequently was, with so many smart people in the party, why would they reduce India to a Kosovo-Rwanda sort of scenario? Do they not see that everyone will be hurt? That our nation, famed for ‘unity in diversity’, will be ruined? The phrase ‘cry the  beloved country’, resonated in my brain like a broken record.

In coastal Karnataka, near Mangalore, Harish Poojari, a young Hindu boy went out to buy milk for the family. The shop was a three-minute walk away. His mother had already started boiling the water for chai, expecting her son to be back in a few minutes. Poojari made the fatal mistake of accepting a ride back from the shop from Samirullah, a Muslim friend. The three-minute bike ride cost him his life. A group of fanatic men, allegedly from the Bajrang Dal, blocked the bike and attacked the two boys. Samirullah survived the multiple knife wounds. Poojari, stabbed 14 times, his intestines pulled out, died, probably instantaneously. His heartbroken cancer-ridden father died two months later. They were a desperately poor family, who rolled bidis for a living.

In Ranchi, Jharkhand, where Adivasis had never been part of communal tensions, coal trader Ansari, left for work in his car. His 17-year-old son received a terrifying WhatsApp video of his father being lynched by a mob. Jumping on to his bike, the dazed boy crashed. He called his brother who rushed to the scene with their mother. They found their car overturned and gutted in the centre of the marketplace. Their father’s blood stains covered the ground. He lay dead in the police station.

Almost more shocking, since lynching and murder appear to be the new normal, is the fact that the family can watch the video of their father’s murder. The young criminals consider themselves patriots. They’ve video taped it with glee. One boy turned the dying man’s face to the camera to get a ‘better shot’. The horror of mob violence and vigilante-ism seems not to have penetrated the mindset of a large part of our population. How can such violence and hatred be condoned under any pretext?

Creating a chasm between Sarna Adivasis and Christian Adivasis is another new strategy that can only lead to more chaos and mindless murders. I abhor the conversion of simple, illiterate people to Christianity by offering them inducements, the so-called ‘rice Christians’. However, the Indian constitution offers religious freedom to all. As someone pointed out in a comment, the same Indians who want equal rights in Britain and the US, wish to curb minority rights back home in India. Even the might of the British Empire could not manage to convert more than 2% of the population to Christianity. But facts and statistics are not important.

Today, September 11, the Karwan meets thousands of people in Delhi. A trip will be made to the widows of the 1984 Sikh massacre to remember those senselessly killed and for whom justice remains a distant dream, over 30 years later. The Karean will proceed to Gandhiji’s samadhi, prayers, poems and songs will be offered to honour the memory of all those martyred so tragically because they were different. Because they shared different beliefs, different faiths, even different food. 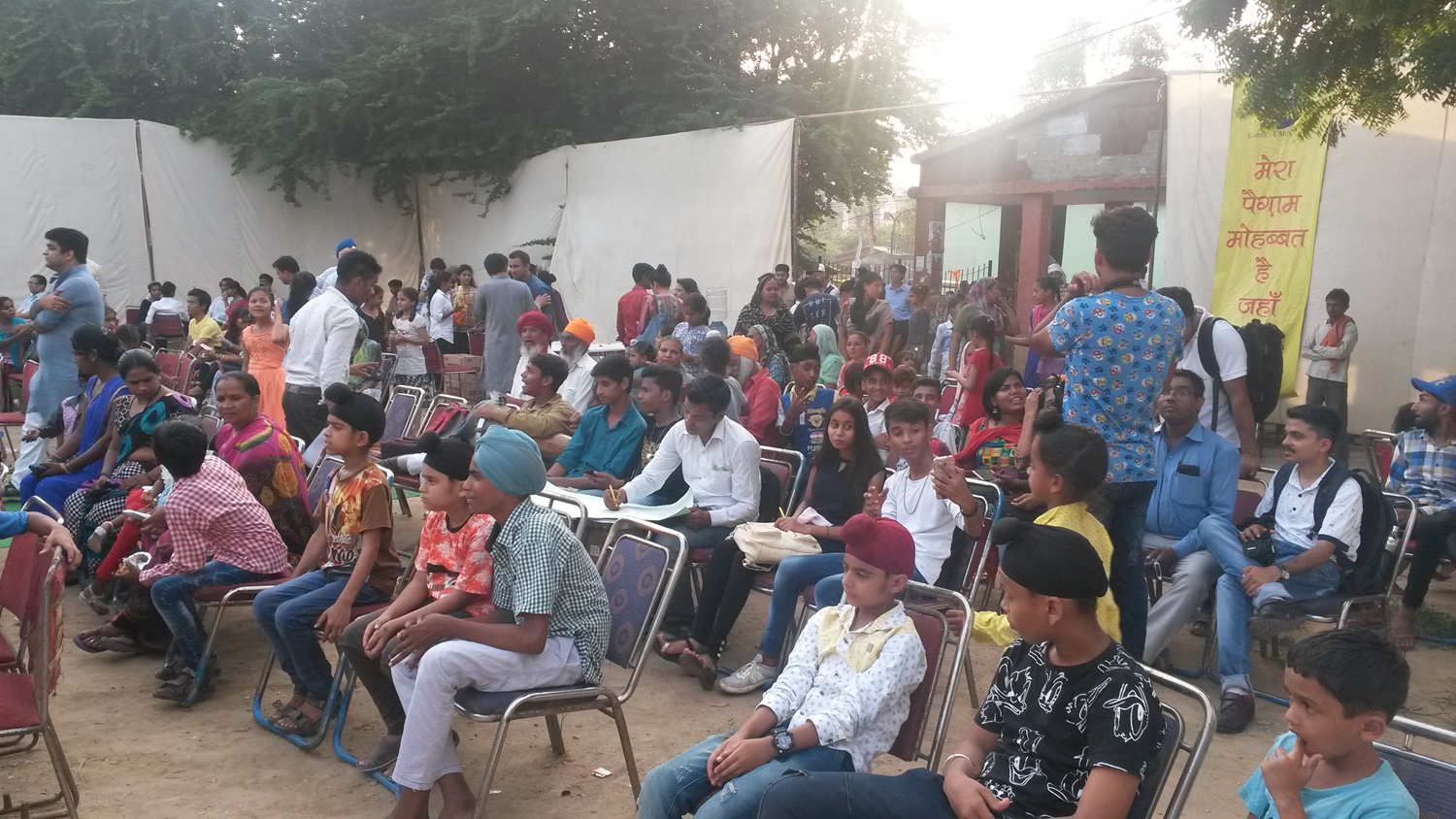 Hope, however, comes in the middle of heart wrenching tragedy and grief. In Jharkhand, a small band of Sikhs who settled in Ramgarh after partition, invited the Karwan to their gurdwara. They recalled the two epidemics of hate that engulfed and destroyed their lives twice. In 1947 after Partition and in 1984 after Indira Gandhi’s assassination. They read from the holy Sikh scriptures of Guru Nanak and Kabir. Messages that exhorted peace, harmony, solidarity and love.

In Giridih, there was a replay of a vicious lynching of Usman, an old Muslim man. The gory details don’t bear repetition. There’s a sameness to them, from Junaid, to Akhlaq, from Dadri to Assam to Mangalore. The man has received no financial help from the state government or indeed from anyone. His son has lost his mind, traumatised by the fact that neighbours could do this to his father. The only silver lining, if one could possibly call it that, lies in the fact that a brave young district commissioner risked facing the wrath of a stone pelting mob to whisk the old man to safety. The mob had planned to set his unconscious body ablaze.

The Karwan will after a break, visit Mhow, Ambedkar’s birthplace and end on October 2 in Porbandar. My hope is that with the heinous silencing of Gauri Lankesh, more young people will respond to calls for a peace movement and stop the spread of the cancerous hate which threatens to destroy India.

We must salute all those people who have decided to stop being mute spectators and climb on the bandwagon to rescue our country from hate-mongers and those who seek to destroy the peace and harmony which is at the core of all major religions in India. May their tribe increase.