Sameer Shahpur who was killed by Hindutva group members. Photo: By arrangement

Bengaluru: Sameer Subhansaab Shahpur (20) and his friend Shamseer Khan Pathan (22), were going to a barber shop on a bike when they were attacked, allegedly by members of the Rashtriya Swayamsevak Sangh and Bajrang Dal on Monday, January 17. The alleged attack came only hours after the accused had delivered anti-Muslim speeches in Karnataka’s Gadag district.

Ten to 12 Hindutva workers in Nargund town allegedly stabbed Shahpur in the chest with a knife and hit Pathan in the back with a knife as well as a rod.

Shahpur succumbed to his injuries at the Karnataka Institute of Medical Sciences (KIMS) in Hubli at around 6 am on Tuesday while his friend, Pathan remains there in critical condition. 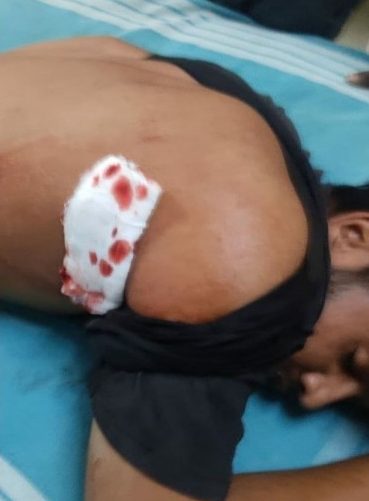 Shamseer Pathan who was injured after a group of Hindutva workers attacked him in Karnataka’s Gadag on January 17. Photo: By arrangement

On Wednesday, Nargund Police released a press statement in which they said that “communal conflicts” have been reported in the between Hindus and Muslims for the past two months and that students have been “inciting” each other since.

On Monday morning, Bajrang Dal members had staged a protest in front of the Nargund police station, demonstrating against the cases that were being filed against their members for the communal clashes that had been taking place. Hate speeches were allegedly being made during the course of their protests.

Videos have surfaced online in which Bajrang Dal member Sanju Nalavadi is heard making inciteful speeches against the minority community.

In one of the videos, a police officer is also seen standing beside Nalavadi while he speaks against Muslims and tells the gathering that the Hindutva organisation would “protect them” and that even the police was “with them”.

Amid chants of “Jai Shri Ram”, the Hindutva leader said, “If they attack us or you (the police), we won’t leave those terrorists. The organisation which protects you (police) is the Bajrang Dal.”

Police sources in Nargund told The Wire that four persons have been arrested in the case: Sanju Nalavadi, Mallikarjun Hiremath, Channabasappa Akki and Sakrappa Kakanoor. “Several people are still absconding and the police are looking for them,” the source said. 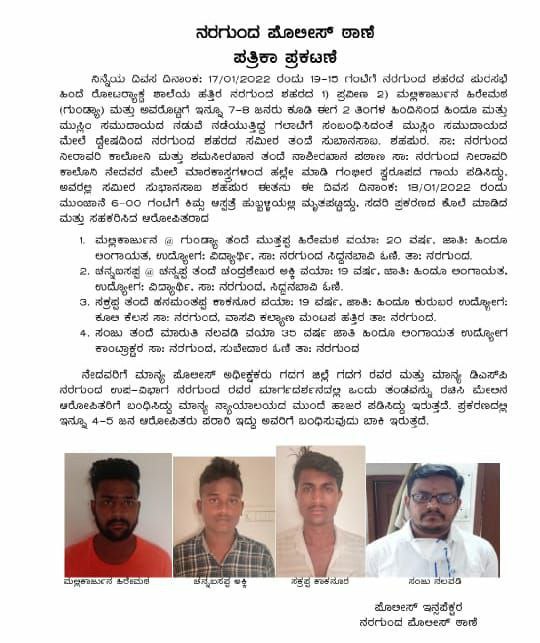 Recordings of CCTV footage have been making the rounds on WhatsApp which shows a group of men waiting at the Nargund State Bank near Sangarwara where they stopped the duo and attacked them.

‘My brother had no enmity with anyone’

Talking to The Wire, Shahpur’s brother Sahil said, “My brother had no enmity with anyone. A few months ago, there were Hindu-Muslim fights between students in the college. Some Hindus had slid knives in a Muslim student’s bag and later accused Muslims of carrying knives. That time, Shamseer clicked pictures of the incident; he was their target. My brother had nothing to do with it.”

While Pathan works at a photo studio, the deceased worked at his uncle’s roadside eatery with his two elder brothers, Sahil and Zubair.

“Sameer left at around 6.30 pm from our uncle’s hotel, saying he’s going to a barber’s shop. He stopped at Shamseer’s photo studio. They both closed the studio and were going on bike to the barber when the Bajrang Dal men attacked them,” Sahil said.

Zubair then reached the spot and took his brother to a government hospital, Sahil said, adding that Shahput got stitches on his chest where he was stabbed. However, he had already lost too much blood. “There was blood all over him. His shirt was soaked in blood,” Sahil said.

“When I heard that Sameer, my little brother, was no more, I couldn’t believe what I just heard. My brother was just going to a barber shop and this happened,” Sahil said on the phone, breaking down. “More than my brother, he was my friend.”

The deceased’s family has filed an FIR with the Nargund police in the case.

Meanwhile, local activist Syed Sarfaraz told The Wire, “Shamseer’s family is in trauma and they are scared to talk to the media.”

Speaking to The Wire over the phone, Karnataka Minister of Public Works Department and Nargund MLA C.C. Patil said, “RSS members are not like this, but it’s very unfortunate that this incident happened. Police have arrested four people and an investigation is going on.”

When asked about anti-Muslim speeches delivered by Bajrang Dal members, the BJP leader said, “Since many days such videos are circulating on social media. It is very unfortunate, the police are looking into the matter. Inquiry will be conducted fairly.”

On Tuesday, Shahpur’s Namaz-e-Janaza (Muslim prayer for the deceased) and funeral was attended by thousands of people in Gadag. Calls of “Ya Shaheed Assalam” (O Martyr, peace to you), a slogan expressing grief, rang out from the procession.

Ashwan Sadiq P., general secretary of the Campus Front of India issued a statement saying, “The RSS have brutally murdered a Muslim youth in Karnataka last night. This shows the necropolitical machinations of the Hindutva republic where structural Islamophobia, manifested in genocidal attacks against Muslims, is sanctioned by the state by creating a climate of impunity for criminals.”

For the past few months, Karnataka has witnessed a rise in violence by Hindutva organisations who target minorities, including Muslims and Christians.