From 'Basavanna Model' to 'Yogi Model': The Fall of Karnataka Under Basavaraj Bommai

With the Karnataka government firmly backing militant Hindutva groups and promising hardline action against Muslims even before their roles as accused are established, little is left to imagination. 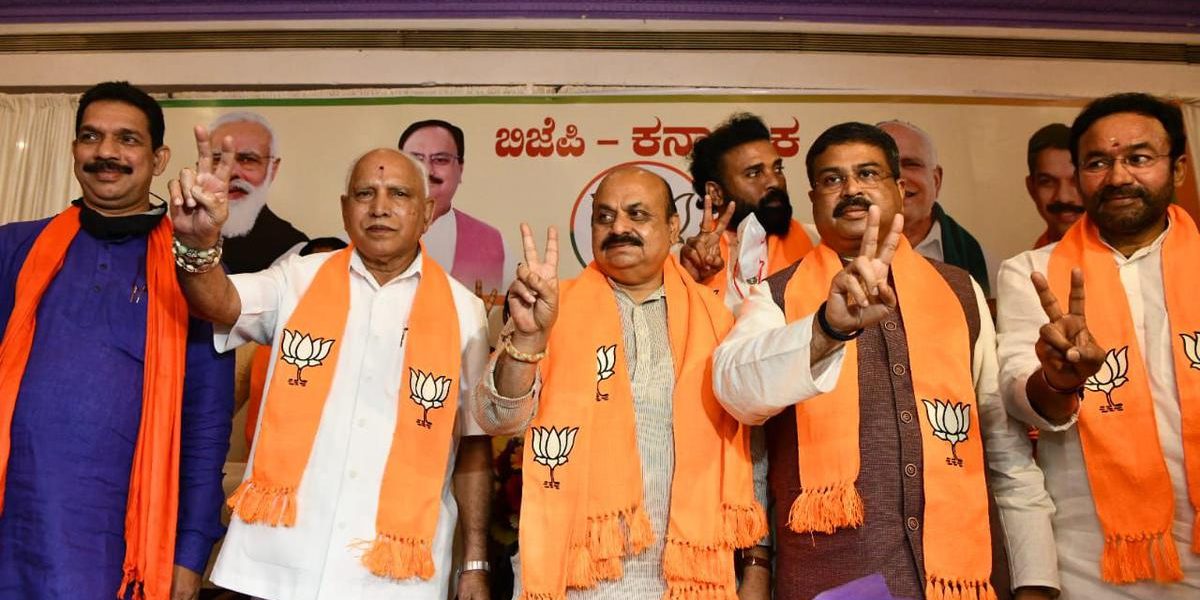 Basavaraj Bommai (centre) with BS Yediyurappa and other BJP leaders after being chosen as the new Karnataka chief minister. Photo: BS Yediyurappa/Twitter

Although the right-ward shift of polity in Karnataka had begun long ago, the pace at which this transformation has picked up under chief minister Basavaraj Bommai’s rule of just a single year is unprecedented.

When Basavaraj Bommai succeeded B.S. Yediyurappa as the chief minister on July 28, 2021, he spoke of the values of equality propounded by Basavanna – the 12th century reformer who founded the Lingayat faith and  preached the equality of individuals in defiance of Brahminical casteist hierarchy.

But on July 28, 2022, exactly a year after he became the CM, Bommai was seen assuring the press – after visiting the house of a BJP youth worker killed by unknown bike riders in Bellare – that he would not hesitate to bring in the “Yogi model” of bulldozer governance to control radical elements in society, directly hinting at the Muslim community.

Even incurable cynics did not expect that a person nurtured by a radical humanist father and a politician groomed in non-BJP centric politics till a decade ago could become such a willing stooge at the hands of Sangh Parivar, and make use of state machinery as an instrument of Rashtriya Swayamsevak Sangh rule in the state.

In fact, governance under Bommai has become communally partial in a blatant way.

While the CM visited the family of murdered Bharatiya Janata Yuva Morcha worker Praveen Nettaru and provided compensation of Rs 25 lakh from the government exchequer, he did not extend the same courtesy to 19-year-old Mohammed Masood, who was was killed allegedly by a gang affiliated to Hindutva outfits just a few days ago on July 21.

In fact, the Sangh Parivar rumour industry had already engineered a narrative that Nettaru’s murder was “calculated retaliation” by Muslim organisations like Popular Front of India and Social Democratic Party of India – for Masood’s murder.

The CM also did not visit the house of another Muslim man, 23-year-old Fazil, who was was hacked to death inside a clothing store on July 28, the very day Bommai visited Praveen’s house.

Fazil, a labourer at Mangalpet in the outskirts of Mangaluru, was brutally attacked with swords by a gang of assassins who came in a car. Fazil later succumbed to injuries even when CM was busy portraying the murder of Praveen as a case of “terrorism”. Even before any preliminary investigations were done, the Hindutva propaganda machinery started circulating rumours that the murder of Fazil was due to a dispute that arose because the family of his Shia girlfriend did not approve of Fazil because he was a Sunni. Without checking with the handful of Shia families in Mangaluru, Hindutva websites and some mainstream newspapers aired these claims.

A day after Fazil’s murder, members of the Muslim community in Mangaluru peacefully gathered for the last rites of Fazil after the Friday prayers – a fact which casts the ‘sectarian conflict’ claim into doubt.

However, it is not surprising that Fazil and Praveen’s murders received disproportionate coverage on mainstream media. Police personnel conduct a march in Puttur, Mangaluru, Thursday, July 28, 2022. Tension prevailed in Dakshina Kannada district following the murder of BJYM member Praveen, who was hacked to death on July 26 by unidentified people on a bike. Photo: PTI

Praveen happens to be an office bearer of the local BJP Yuva Morcha. The present president of the state BJP wing and two-time MP Nalin Kumar Kateel is also from the same area.

Thus the murder of young party leader was considered by the BJP and Sangh activists at the local level having been caused by the ideological corruption of BJP ministers and leaders who are unable to protect them. This anger was expressed with gusto by party activists when Kateel and Sunil Kumar, the state’s culture minister, visited the area.

The ministers were surrounded by a mob which rocked the cars and the tyre of one of the cars in the convoy was deflated. They could be escorted out unharmed only after police lathi-charged – ruthlessly, it has been alleged – on BJP activists.

This was followed by the mass resignation of office bearers of the BJP’s youth wing in many parts of the state. Even the CM had to face the heat when he visited Bellare next day.

Then, a day ago, a group of Akhil Bharatiya Vidyarthi Parishad activists barged into the house of the state home minister, demanding his resignation and the ban of PFI and SDPI, who, according to the BJP-RSS are behind the murders.

In protest demonstrations, rightwing party members urged the government to implement the “Yogi model” of encounters and bulldozing of the properties of the accused – even before their guilt is proved.

Soon after, state police arrested some Muslim youth on “suspicion”. One of them happens to be the son of a worker in Praveen’s poultry farm. Pramod Muthalik of the Hindutva outfit Sri Ram Sene and another saffron-clad Hindutva leader, Kali Swamy, have demanded an “immediate encounter” of the accused. Kali Swamy had earlier gone to the extent of demanding “10 Muslim heads to avenge one Hindu,” in an open press conference. He recently congratulated those responsible for the murder of Fazil and challenged the PFI to kill him and the state home minister. No FIR has been registered against him till date.

The hope shown by eternal optimists who read the anti-BJP slogans raised by BJP activists as an expression of the fact that they have realised the futility of communal polity is misplaced.

It is still a long time to dawn.

In fact, developments point to the opposite direction. The resentment shown by disappointed activists at Bellare and the orchestrated anti-BJP utterances and demands made by some is being portrayed as though it is the people’s mandate that extra-judicial and unconstitutional coercive measures targeting the Muslim community be initiated. C.N. Ashawth Narayana, a minister in the Bommai government, has declared that the administration will not hesitate to resort to encounters and will be ready to “go five steps ahead” of the Adityanath government “in dealing with such elements.”

The CM, too, was quick enough to hand over the case of Praveen’s murder to the National Investigation Agency on the pretext of the possibility of the involvement of inter-state criminal gangs since one of the findings suggested the use of a vehicle bearing a Kerala number plate.

The same CM, in August 2021, a month after taking oath, had rationalised acts of moral policing by a Hindutva activist as a “logical reaction to the actions of another community.” Not only this, he was caught on camera assuring the withdrawal of cases against Hindutva activists. This emboldened “fringe” elements enormously and lead to the chain of unprecedented and multifarious attacks on the lives and identities of Muslims and Christians.

Thus in the month of October 2021, bowing to the dictates of Keshava Kripa, the head office of RSS in Bengaluru, an ‘anti-conversion Bill’ was introduced in assembly on a complaint made by an MLA that his mother has been converted to Christianity by force. Even though the official fact-finding report of the Revenue Officer of the tehsil completely denied any forcible conversion, the pretext had already served its purpose.

Later in the month of December 2021, the hijab controversy was intentionally allowed to gather disproportionate attention, at a time when communally charged election campaign was in full swing in UP and other states. Even before the hijab issue was settled, controversies over azaan and later, halal were allowed to flare up. Then came attacks on Muslim traders who had shops in the vicinity of Hindu temples. Even before this controversy was settled, saffronisation of text books was successfully completed.

Even an innocuous play, Jotegiruvunu Chandira (‘the moon as sojourner’) was disturbed by Hindutva gangs with the full support of local police in Sorab in Shimoga district. Their complaint was that all the Muslim characters in the play were portrayed as good persons!

In each and every one of these controversies, the Bommai government has backed the so-called fringe elements who have indulged in blatant violations of laws. BJP MLAs have justifies such acts as nationalism in the legislative assembly.

Karnataka under Bommai has seen a comprehensive collapse of constitutional morality under the hegemony of Brahminical Hindutva. 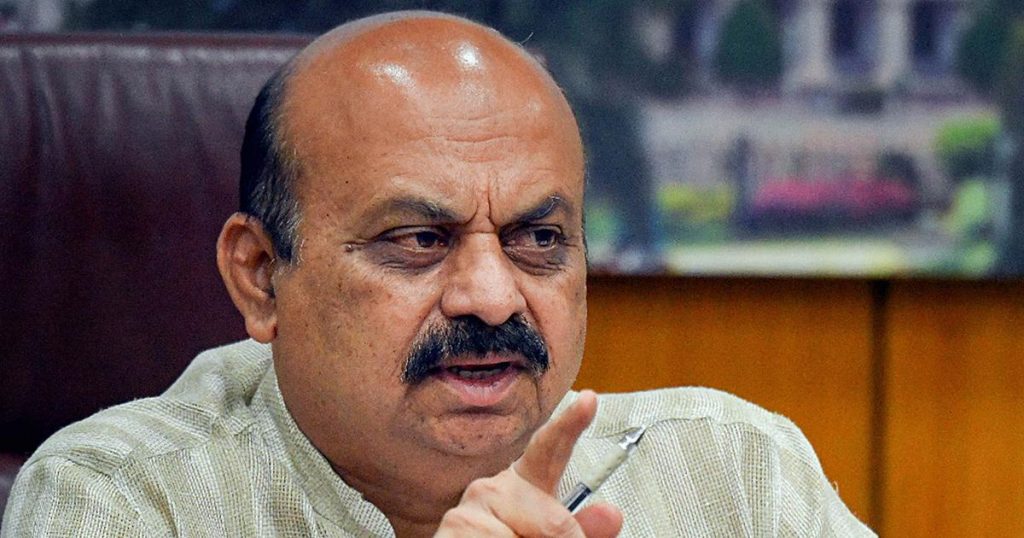 Immediately after Hindutva activist Harsha was murdered in Shimoga in February 2022, his sister made a fervent appeal to the public not to fight over religion. But a flurry of visitors from the BJP, Sangh Parivar and other Hindutva bodies to Harsha’s house, and the show of handing over compensation, drowned out this call for harmony. None of them visited Dinesh, a Dalit boy killed by a Bajrang Dal activist in the same month.

The glaring partiality displayed in giving compensation or paying official visits to the houses of the grieving is for all to see.

Partisan omissions and commissions when it comes to police investigations and arrests are becoming so obvious that even the Muslim Central Committee of Mangaluru, which is otherwise known for its moderate and non-confrontationist attitude, has boycotted a ‘peace meeting’ called by the district administration, accusing the government of “practicing communalism in not visiting or paying compensation to Muslim victims”.

In an otherwise unprecedented move, the committee has decided to pay a compensation of Rs 30 lakhs each to the families of Masood and Fazil.

Recently, the Congress party of the state released a list of alleged Hindu activists who died during the Congress’s rule under Siddaramaiah.

BJP gained big political capital out of this ill-thought-out campaign, alleging that Hindus had not been safe under the Congress government. According to the list, out of 24 deaths of “activists, only 12 are alleged murders and are in different levels of legal proceedings. Twelve are deaths due to other reasons, and not murders.”

BJP has not disputed the facts provided by the list.

As Mangaluru city comes under curfew – thanks to the political cancer of state-supported communalism – it is clear for all to see that Bommai as the chief minister has allowed this to take place under his watch.

The judiciary has so far been reluctant to take cognisance of the intent and impact of utterances – like those promising encounters and bulldozer justice – by persons holding constitutional office. The Supreme Court has, in fact, taken a mechanical view in pleas against bulldozer justice.

Thus Bommai, a chief minister with beginnings in a non-RSS-BJP party and with an otherwise secular background has gone from gate-keeper of the constitution to stakeholder in a Brahminical Hindu Raj. And Karnataka, once a progressive state following Basavanna’s ideals, has slid into Yogi Raj.