Chokyong Palga Rinpoche recently undertook a 'peace march' from Leh to mobilise support for the establishment of a Buddhist shrine in Kargil, a Muslim majority region. While the march was stopped, locals are not convinced it was intended to be peaceful.

Leh: On June 13, Chokyong Palga Rinpoche, an independent Buddhist monk, attempted, what he called was a peace march to Kargil from Mulbekh. His march was aimed at mobilising support for the construction of a Buddhist shrine in Kargil, which is a Muslim majority region.

The march began on May 31 in Leh. He planned to reach Kargil on June 14. However, the local administration stopped it at Mulbekh, sensing trouble.

For Rinpoche, it was easy to gain support from the locals in Mulbekh, which is predominantly a Buddhist majority area. Mulbekh is located 35 kilometres east of Kargil on the road to Leh.

Rinpoche’s march could indeed have stirred communal passions, because the monk has been raking up an old contentious issue regarding the establishment of a Gompa, a Buddhist shrine, in Kargil.

According to Rinpoche, in 1961, a piece of land was earmarked for the construction of a monastery in Kargil. However, local Muslims in Kargil say that no Buddhists resided in the town – which is home to Imam Khomeini Memorial Trust (IKMT) and the Islamia School Kargil (ISK) – making it difficult to maintain a monastery if established.

The 1961 order was amended in 1969 by the government and the land in question was earmarked for building residential or commercial complexes. The 1969 order also suggested that in no case should the site be used for any religious purpose.

Rinpoche has earlier blamed Kashmiri politics for rejecting the idea of having a Gompa in Kargil. 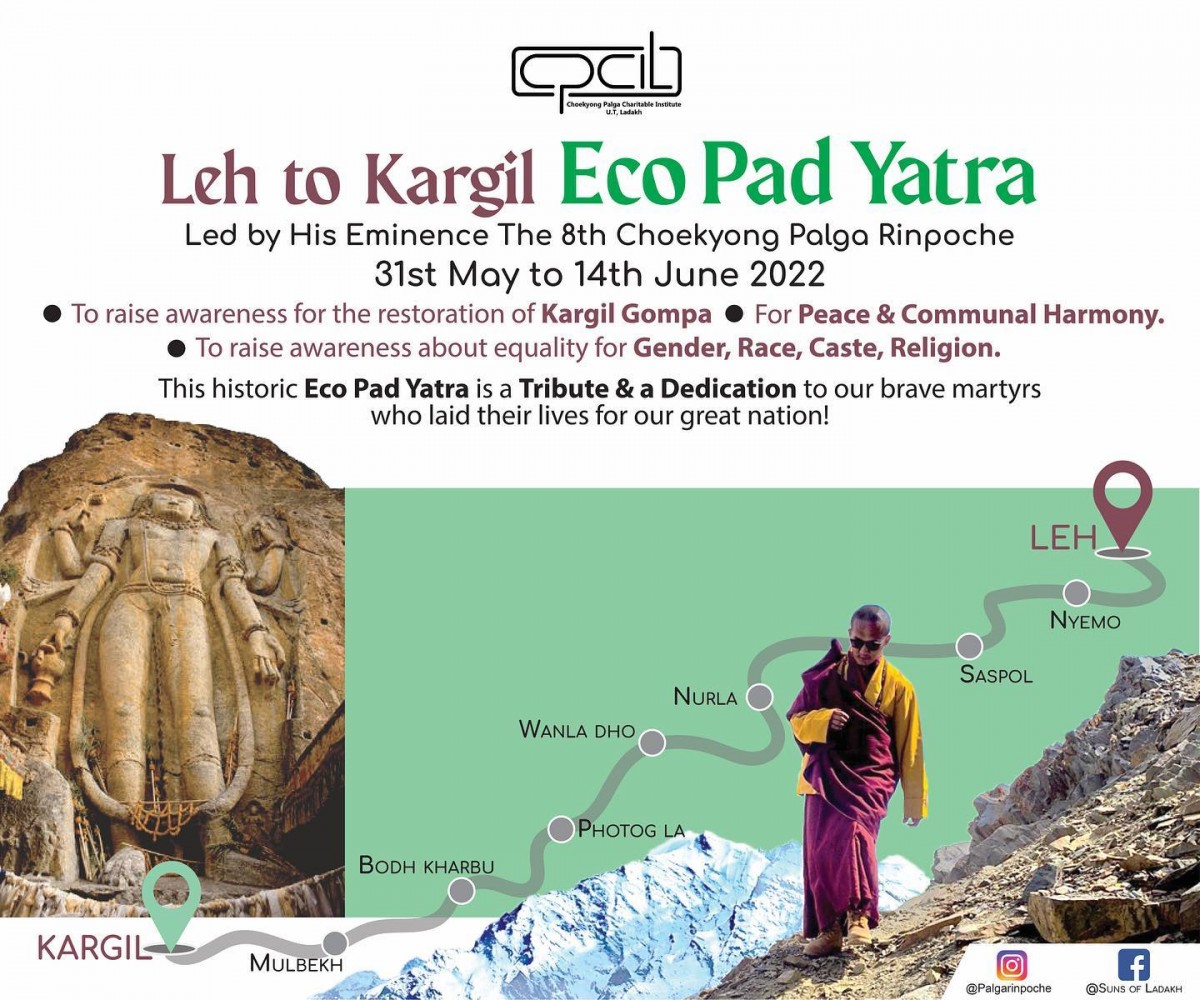 A poster released by Chokyong Palga Rinpoche’s supporters advertising the march from Leh to Kargil to press for the demand of a Buddhist shrine in Kargil.

He says his march was supported by the fact that Ladakh is now a Union territory and not under the control of any local Kashmiri politician.

The land, in spite of the 1969 order barring its religious use, was allotted to the Ladakh Buddhist Association (LBA). The LBA has maintained that religious events had, in fact, been peacefully taking place at the site all along, and this year too.

Speaking to The Wire, Chhering Dorje Lakrook, former Bharatiya Janata Party leader and minister in the erstwhile state of Jammu and Kashmir, says that it is for this reason that the sudden march appears “politically motivated.”

Lakrook, senior vice-president of the LBA, said the LBA has released statements calling on people to refrain from using irresponsible and provocative language regarding the issue.

Another organisation which is involved in ensuring that better sense prevails is the Kargil Democratic Alliance (KDA).

To resolve the matter amicably in a region with religious diversity, the KDA wrote to the Kargil district magistrate, also calling the monk’s march “politically motivated” with a “clear intention of disturbing the communal harmony and peace in the area”.

KDA member Sajjad Kargili believes that the kind of brotherhood that exists in Ladakh is precious and should be safeguarded.

Kargili says, “We are negotiating with Ladakh Buddhist Association, the main stakeholder of the piece of land. Some people are deliberately trying to disturb our harmony and the ongoing dialogue. We are ready to amicably resolve the issue once and for all.  We also won’t allow anybody to gain political mileage out of this issue.”

Commenting on how the locals saw the march, Sheikh Nazir Mehdi, president of Anjuman Jamiat Ulama Isna Asharia Kargil (AJUIAK), says that the political parade was given a religious colour. “This whole exercise was only aimed at casting Muslims in a bad light. We have asked them ourselves as to whom they need the Gompa for when there is no Buddhist population here.”

The Wire spoke to locals in Kargil as well as Leh to understand how residents in both the districts felt about the march being led in a way that the administration had to intervene to stop it.

Sonam Dadul, a practising Buddhist based in Leh, walks all the way to Mulbekh to worship at the two Gompas in the monastery there. Dadul (48) also went to Mulbekh with fellow believers on June 14, on the occasion of Purnima.

“Worship in Buddhism is a very personal deed. Buddhism does not teach us to flamboyantly display our prayers. The padyatra was a movement, it cannot count as prayer,” explains Dadul.

A Kargil local, Ghulam Raza, frequently travels to Leh for business. Raza believes that peaceful coexistence in Ladakh should be a source of inspiration for the rest of India, in times when communal tensions are ripping apart the country.

Kargil locals also said that no Buddhists live even within a 20-km radius of the site and that the current building there is a Buddhist guest house and must remain so.

Meanwhile, Rinpoche has been actively urging Buddhists to join him on his yatras to restore the temple at the site, on Facebook. He has also been accusing Lakrook and Thupstan Chewang, the president of the LBA, of overlooking Buddhist values in the name of demanding statehood from the Union government.

While the LBA has again repeated that Buddhist rituals are, in fact, performed at the said site, Rinpoche has doubled down on claims that prayers are not allowed at the site.

The monk has also claimed that the march was shorn of any political influence.

However, at a recent event in Leh, during his address, Union home minister Amit Shah sent out a message through Ladakhi MP Jamyang T. Namgyal that the issue of the monastery “would be taken care of.”