Justice Sachar understood that the issues surrounding the communalisation of demography were complex and never gave up the good fight. 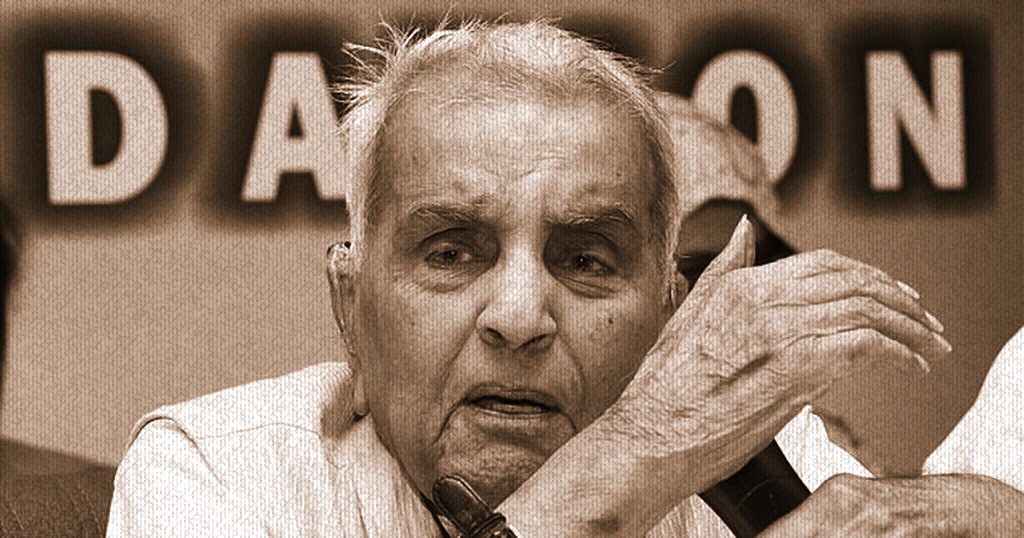 Justice Rajinder Sachar, a brave warrior for truth and justice, passed away on the April 20, 2018. Despite being a brave warrior, he was also the gentlest, kindest and the most soft-spoken of men, as I remember him when I gave evidence before the Sachar Committee. The Sachar Committee had been established in 2005 by the then prime minister, Manmohan Singh, and was called the Prime Minister’s High Level Committee for the Report on Social, Economic and Educational Status of the Muslim Community in India, 2006.

By painstakingly going through a mountain of data, by listening to experts on various fields, the Committee had exposed the hollowness of the propaganda related to the “appeasement” of Muslims in India. It showed the appalling conditions of poverty, illiteracy and ill-health they had to contend with, along with relative state neglect. On many indices, the Muslim community in India was worse off than even the Dalits and adivasis.

The member secretary of the Committee, Dr. Abusaleh Shariff, who had put in a monumental amount of work, had asked me to make a presentation on what has come to be called, after the Jefferys’ work (Patricia Jeffery and Roger Jeffery, Confronting Saffron Demography, Three Essays Collective, 2006) Saffron Demography, the political misuse of some demographic facts to demonise the Muslim community in India.

My presentation, based on data, showed that there was nothing like a Muslim rate of population growth, a chimera, like the Hindu rate of economic growth. The population growth rate among the Muslims in Kerala, is lower than than that among Hindus in most BIMARU states. The rates of polygyny among Muslims (“We are two and have two; they have five and have 25” is the Vishwa Hindu Parishad’s slogan) is lower than among STs, SCs, Jains and Hindus. This is another lie spread by Hindutva groups.

Finally, the data revealed that the rate of decline of Muslim rates of population growth, had been greater than that among Hindus.

We have no explanations for this, given the poor socio-economic status of the community. There are other facts that also need consideration. Given their lower socio-economic status, Muslims in general have a lower Infant Mortality Rate than other communities. The female IMRs are lower among Muslims than among Hindus. The Child Sex Ratio is more female friendly among Muslims than among Hindus.

Most people do not know these facts and label Islam as anti-women, as if other religions are pro-women.

I found Justice Sachar not only deeply interested in my presentation, he also followed it up by asking penetrating questions. What, he wanted to know, was the appeal of this kind of propaganda?

Saffron demography suffers from serious methodological, philosophical and empirical problems. It is based on assumptions – that there exists a uniform and homogenous Muslim community and an equally undifferentiated Hindu community in India – which are blatantly false.  It is also supremely ahistorical: it does not look at trends of population over periods of time among these homogenised communities; neither, of course does it look at differentials in the determinants – for instance that in India today household economies differ between Hindus and Muslims and that these could have profound demographic consequences. Data also indicates that the use of contraception by Muslim women increased faster in the 1990s than among Hindus (Krishnaji and James K.R (2005), “Religion and Fertility: A Comment”, Economic and Political Weekly, Vol.XXXX, No.5). I can cite any number of other facts – all these can only bring in responses that I should change my religion.

This communalisation of demography has a long history. As early as 1909, U.N. Mukherji had written a book entitled Hindus: A Dying Race, which went on to influence many tracts and publications by the Hindu Mahasabha, the parent organisation of the Rashtriya Swayamsevak Sangh (RSS). This book seemed to meet a widespread demand, going in to many reprints, feeding into Hindu communalism, and helping create it. It had a special appeal to Hindu communalists at this time, anxious to create a monolithic Hindu community, in the face of demands for separate representation emanating from both Muslims and lower-castes. Whipping up anxiety about Muslims would be one way to weld together hugely diverse, and often antagonistic, castes into one community, erasing the structural divisions in caste society. Indeed it has been noted that “for Hindu communalism, it (the book) had a more direct resonance as Hindu communalism was now preoccupied with numbers…the possibility of low castes declassifying themselves as Hindus was a motivating anxiety behind the origins of Hindu communalism” (Datta, Pradip Kumar (1999), Carving Blocs: Communal Ideology in Early Twentieth Century Bengal, O.U.P.).

Deeply riddled with inaccuracies, wild flights of prediction of the future with utterly no basis, the book nevertheless provided “demographic common sense functioning as a trope for extinction” (Datta 1999: 23).  Also, fundamentally, the Hindu communalists believed – and continue to believe – that a nation is defined “culturally” as a Hindu nation, just as Muslim communalists believed in the purity of an Islamic Pakistan. So neatly did the communalists of both religions, Hindu and Muslim, by evoking demographic fears, subscribe to colonial definitions of Indian society. The censuses of the period also contributed.

We must however, remember that this discourse emerged at an embattled political space, as colonialism was contested, as political classes were formed, as the working class was congealing, and early feminist ideas were gaining ground. None of these of course configure in the communalist discourse.

There was yet another flame stoking these fears among Hindu communalists, resentful of social reform. Emblematic here was the tragic figure of the Hindu widow. Forbidden remarriage among the upper castes she was at once responsible for the dying of the “Hindu race” as she was an allurement for virile Muslim men, a danger within the sacred heart of the Hindu household, waiting to be profaned. Fitting neatly into this gendered anxiety was the communalisation of the issue of “abduction” of Hindu women. Indeed this too was prominent in the form of epidemics of rumours before the Gujarat carnage in 2002. Thus the embedding of patriarchy, “nationhood”, and violence against women in discourses on numbers, inscribing on reproductive women’s bodies atavistic anxieties about the future, and the politics of genocide.

Justice Sachar understood that the issues were complex and there was a need for people’s groups to fight not just for democratisation, but gender justice at the grass-roots. This included gender-just personal laws.