My Young Neighbour is OK With Junaid's Killing. What Do I Tell Him?

Fear of intrusion by the Other is what drives our individual and collective life, politics, reactions to the acts of terror and responses to the Other. 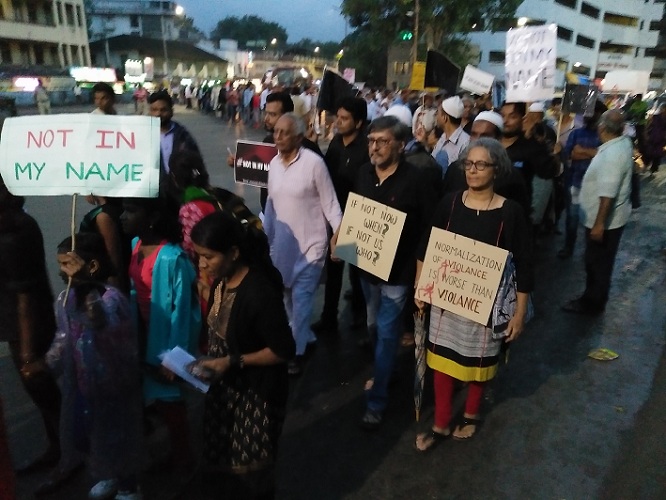 A view from the #NotInMyName protests against mob lynchings. Credit: Sandhya Gokhale 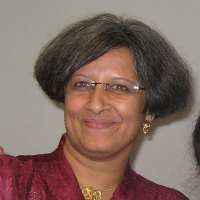 “Why are you mourning Junaid’s death?” the boy next door was asking me.

Was he asking for an explanation of my act of mourning or a narration of Junaid’s death? I was perplexed. Assuming it was the latter, I directed his eyes to a headline in the newspaper. “Oh that recent train killing?” The ease in his tone was chilling. “I’m sure those brothers must have done something wrong. Ungali ki hogi, to hum chup baithe kya? Unko lagta hai saari duniya mein aatankwad phaila rahe hain to Bharat me bhi kar payenge. Hum gaumata ka dudh peete hein, yahaan khaate nahi usko… mundi neeche kar hi chalnaa hoga yahaan  rahana hai toh! (They must have instigated them, then why should we keep quiet? They think because they are spreading terrorism in the rest of the world, the can do it in Bharat as well. We drink cow’s milk, we don’t eat cows here…if they want to stay here, they will have to walk with their heads bowed!)”

I was speechless at this onslaught of words. Each sentence was loaded with prejudice and hatred, endorsing the stark divide between “him” as a gaumata-ka-dudh peeta beta (cow-milk-drinking son) and “them”’ as the Pakis/the terrorists/the beef eaters. His phallic words spread a wide fault line on the other side of which I saw him closing his house door behind him.

In a fraction of a second, all my fond memories of him flashed before me – him crawling through the corridor between our two houses… feeding him when his hand was in a plaster… giving him my heartfelt blessings before his exams… gifting him Henry David Thoreau’s Life Without Principle just last year on his 21st birthday.

The next second my mind went blank. I felt numb. How was I so completely oblivious to this aspect of his being? Had he been harbouring this venom all through our interactions without ever expressing it? Had he grown up conditioned to think these thoughts or was he converted at some stage? Has his world been so monochromatic? Why didn’t he share all these thoughts with me? He probably never gathered the courage to – but then why did he spell them out now? Was he suddenly feeling empowered to face me? I heard Freud’s murmur in my ears, “A neighbour is a traumatic intruder.”

When I was young, I was told that the perpetrators of heinous acts were evil people and even embracing such thoughts was monstrous. But this boy is not an archetypal monster. The attackers of Junaid were not monsters either; they were just ordinary train passengers like him and me. What is entrenched in us as humans – the violence or being away from it? It was a moment of revelation for me when I realised that he was who I was not – or maybe he is who he is because of me who he is not.

This incident reminded me of a famous anecdote. A German officer visited Pablo Picasso in his Paris studio during the Second World War. There he saw Guernica. Shocked with that chaotic modernist painting, he asked, “Did you do this?” Promptly Picasso replied, “No, you did this!” Today, the dichotomy between the ruling majority and the ruled minority is facing this unary: ‘p and not p’. But are these two worlds based on empirically verified numerical truths or merely perceived truths? The underlying thread that actually binds this divide has always been one of violence. The violence implicit in the classical binary of the oppressed and the oppressors based on the combinations of caste, power, wealth, gender and so on operates vertically. There is an inherent or adopted hierarchy which dominates and gears the violent motions. But in the present scenario, the motion is horizontal, and horizontally manifesting the cultural violence. My neighbour and I too are the participants of this violent frenzy – he as a participant or “who he is” with his set of thoughts and I as a bystander or a protester standing in negation of “who he is not”.

Why is everyone feeling so restless? What has gone wrong? Why are we feeling as if one is trapped in the eye of a storm? History has recorded enormous wars, the ethnic cleansing of millions between the ninth and seventh centuries BC, the Nazi holocaust’s annihilation of six million Jews, gypsies and homosexuals, the Turkish massacre of Armenians, the Pol Pot killings, the genocide in Rwanda and former Yugoslavia, the bloodbath in the Arab world, the riots during the partition of India and many more such examples of insanity. Now when the destruction of Khajuraho is an immediate and present danger, the painful fate of Bamiyan Buddha has hit us hard. Now that the present phenomenon of mass frenzy is at our doorstep, the outburst of my neighbour can well be contextualised in the frameworks articulated by Slavoj Zizek and Johan Galtung.

In his book Violence: Six Sideways Reflections, Zizek has elaborated on a politics of fear in relation to his concept of the “neighbour” – that is to say, the “fear of neighbour is the ultimate cause of violence”.  The neighbour is accepted and accommodated only so far as the Other does not intrude upon us and remains at a nuisance-free distance. Fear of intrusion by the Other is what drives our individual and collective life, politics, our reactions to the acts of terror and our responses to the Other. In this sense, the Other is, in actuality, one’s enemy. Our lack of respect for the Other, particularly the vulnerable Other, leads to our blindness to contradictions in justifying our heinous, torturous acts even when it abrogates the ethics which the communities abide by for centuries.

Language, through certain coined terms like “presstitutes”, “deshdrohi”, “anti-national”, “traitor”, “boat people” or “refugees”, by itself creates an atmosphere of unrest and symbolic violence. Such terms define and alienate the Other while drawing the entire ambience of persons who are dissenting from the popular ideology or are keeping independent minds or are running away from their country seeking asylum in another country and who are intruders or trespassers. Such terms place the so-labelled subjects in a political sphere and outside of the cultural domain stripping them of any sympathy, civilian protection or dignity. This in turn provides the necessary justification to be violent towards them. This symbolic violence of condemnation or the objective violence of authoritarian control thus perpetrate the systemic violence which in turn circulate the air of symbolic and subjective violence.

The pathology of violence has also been dissected by Galtung, a Norwegian peace theorist, in terms of direct, cultural and structural violence. By structural violence he meant a situation “when human beings are being influenced so that their actual somatic and mental realisations are below their potential realisations i.e., the systematic constraint on human potential due to economic and political structures.” By cultural violence he implied those aspects of culture, the symbolic sphere of our existence reflected through religion and ideology, language and art that can be used to justify or legitimise direct or structural violence. Military parades, large cut-outs of the Leader, inflammatory speeches, labels or symbols like cows, flags, national anthems are all forms of cultural violence which makes use of violence look or feel right or even legitimises that use, or at least help perceive it as “not wrong”. Galtung further analyses, “One way cultural violence works is by changing the moral color of an act from red / wrong to green / right or at least to yellow / acceptable. Another way is by making reality opaque so that we do not see the violent act or fact or at least not as violent. These ways impend consciousness formation and mobilisation, two conditions for effective struggle against exploitation. Penetration, implanting the top dog inside the underdog so to speak, combined with segmentation, giving the underdog only a very partial view of what goes on, will do the first job. Marginalisation, keeping the underdogs on the outside, combined with fragmentation, keeping the underdogs away from each other, will do the second job.”

Every time my handsome cat Schrodinger urinates in his litter box, the sand gets clumped into hard blocks which I can easily scoop out in order to ensure a hygienic environment. The venom spat out by my boy next door forced me to place those violent clumps into proper perspective. I have realised that this process of cleansing is not going to be easy. The toxin is pervasive. It cannot be scooped out. This cumulative scourge in the form of violence and the wilful blindness of the majority has set the fault line wide and deep. I cannot assess at this point what is more perilous – the ideological normalisation of violence or the marginal outcry against it?

The boy has already closed his door behind himself. What shall I do? Shall I find him through the void stretched all along the corridor that once connected him with me? Or shall I just turn the knob, walk in and close my door as well? What shall I do in the name of Junaid?

Sandhya Gokhale is a lawyer and a filmmaker.

This article was originally published on Indian Cultural Forum.