The chambers of commerce and industry in Jammu and Kashmir have come together to make sure trade and business interests do not become collateral damage. 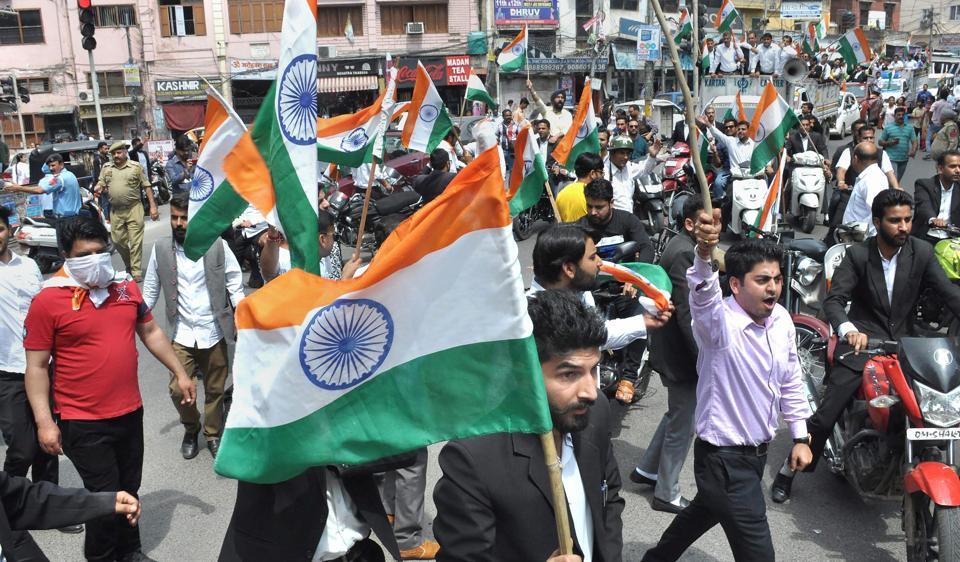 The Jammu Chamber of Commerce and Industry did not support the bandh (pictured above) called by the Jammu Bar Association. Credit: PTI/File

As communal tensions ferment in the Jammu region following the arrest of eight persons accused by the Jammu and Kashmir crime branch for the rape and murder of an eight-year-old Bakarwal Muslim girl, the Jammu Bar Association dominated by pro-BJP members led the way to block action against the accused.

Preying on the fears of Hindus, right-wing activists began working to deepen the divide between ‘Hindu Jammu’ and ‘Muslim Kashmir’, by whipping up fears that the presence of Gujjar and Bakarwal communities in Jammu will change the demography of the region. The motive was to strengthen the perception that the ‘pro-Kashmir’ People’s Democratic Party (PDP) led by chief minister Mehbooba Mufti is working towards this hidden agenda.

The demand of the Bar Association of Jammu to hand over the investigation to the Central Bureau of Investigation (CBI) is based on the premise that the ‘pro-Kashmir’ government has influenced the Crime Branch’s chargesheet to malign Jammu Hindus. If there is a sliver of hope that communal tensions will not escalate to levels last seen during the Amarnath land agitation of 2008, it is the resolve of the trade and business communities of both regions to thwart such designs.

On April 10, a day before the Bar Association’s Jammu bandh was to begin, the Jammu Chamber of Commerce and Industry (JCCI) led by Rakesh Gupta addressed an urgent press conference to say that it will not support the bandh because the association’s activities are ‘politically motivated’ and not based on facts and logic. The chamber, which is the other powerful body in Jammu and usually works together with the Bar Association in taking up issues of the region, clarified its stand on the rape of the little girl in Kathua thus:

“The Rassana rape and murder of an eight year old child is a heinous crime and irrespective of caste, creed and religion, whosoever is found guilty should be given the highest punishment provided under  the law. The fact is that the investigation by the Crime Branch was being monitored by the Honorable High Court and the charge sheet has been filed, so it is a sub judice matter. It is entirely upto the judiciary to see the authenticity of the chargesheet and decide on the same or hand over to the CBI for further investigation.”

Advising the Bar Association to reconsider the bandh call, the JCCI went on to allege that the association’s actions are not in consonance with the code of conduct which should have been in force for the Bar Association elections due on April 19. A leading industrialist of the chamber told The Wire that many are feeling that the whole issue of opposing the Crime Branch investigation which has brought “disrepute to Jammu” had been escalated only to serve the political interests of some senior members of the Bar, who want to use the issue to defer the association elections.

The JCCI’s categorical opposition to any support for those seeking a CBI investigation in the name of justice for the victim sent a sigh of relief in Kashmiri trade and business circles. The alliance forged between it and the Kashmir Chamber of Commerce and Industry (KCCI) in September last year, to prevent communal forces from creating a divide between the two regions so that trade and business are not affected, has begun to work.

Speaking to The Wire, Javed Ahmed Tenga, president of the KCCI, said, “Jammu is the lifeline for trade and industry in Kashmir and we appreciate the stand of the JCCI and their press conference on April 10, as this will go a long way in dousing communal fires in the region. The regions of Jammu and Kashmir, though divided by the Pir Panjal mountains, are one, and both are economically interdependent on each other. There is a huge trade of general items which come to Kashmir from Jammu and we the businessmen from Kashmir have had our warehouses, trading partners and infrastructural support in Jammu for decades.”

Notably, both bodies were at the forefront and deeply embroiled in the political dynamics of the Amarnath land agitation of 2008, when an economic blockade by Jammu led to massive losses on both sides, and trade and industry suffered as a result for several years. But the agitation left important lessons in its wake. If today, the business community of the state has joined hands to defuse communal tensions and transcend regional biases to take up economic issues of the state as a whole, it is purely due to a realisation that they have borne the brunt in most episodes of unrest in the state, mostly fanned by political elements of different persuasions.

Referring to the economic price paid by traders whenever there is unrest, Rakesh Gupta said, “Who is looking at the collateral damage that communal unrest and violence leads to?” If earlier the Jammu business community was a willing tool for sectarian forces, the response now is cautious. Mixing business with politics during the Amarnath economic blockade singed them badly and few want those troubled times to return. Kashmiri traders in the last few years have also begun to access markets in Delhi and beyond for the sale of their products so as to reduce their dependence on the Jammu trading lobby, but most of them maintain residential and commercial buildings in Jammu city.

Says Gupta, “When the Kathua rape case began to be investigated by the Crime Branch, I could sense that things will flare up and disruptive forces will try to create tensions between the two regions. Whenever there is an economic or social issue which impacts Jammu, we in the chamber have been at the forefront and in the past, we have worked together with the Bar Association. But we found it hard to support the association’s negative approach on the Kathua matter because if they wanted the case to be transferred to the CBI, the lawyers should have taken the legal course and approached the higher courts instead of using extrajudicial means to communalise the issue. Not only is their conduct illogical, but will harm the long-term interests of the state and jeopardise life and property here. Our effort now is to restore sanity on the ground and check communal elements from gaining ground.”

The collaboration between the two chambers was also seen during the row over cow slaughter in Udhampur, in which three Muslim truckers died in attacks on them, one of whom was set ablaze allegedly by right-wing activists. The JCCI and the KCCI held a joint press conference in Srinagar, where Gupta and others reassured Kashmiri transporters and advised them not to play into the hands of communal forces.

Seeing the success of their initiatives, leaders of the business community now feel that they can play a larger role in bringing peace to the troubled state. “We are advocating a dialogue with all stakeholders and consistent engagement with people from all walks of life to find a solution. Just the handicrafts sector of Kashmir alone does trade worth Rs 3,000 crore annually and everyone, from exporters and big trading houses down to the humble artisan, suffers whenever there is unrest. Hundreds of small industrial units manufacturing textiles, pharmaceuticals, cement, rubber and plastics, electric parts etc. have sprung up in the towns around Jammu like Samba, Kathua, Gangayal and Bari Brahmana, and most of their produce is consumed within the state,” observes Tenga.

The way the business community is reacting to the situation indicates that hope may be around the corner in Jammu and Kashmir.