Now an adult, the 'juvenile' who fired on Jamia students has all Muslims in his crosshairs. New Delhi: On January 30, 2020, a young man from Jewar infamously known as Godse 2.0 by his supporters opened fire at students from Jamia Millia Islamia who were marching against the Citizenship (Amendment) Act, 2019 (CAA). One Jamia student was injured and the teenager was arrested by the Delhi Police.

Soon after, news channels such as Republic TV declared that the shooter was a Jamia student, although he wasn’t, and blamed the peaceful protestors for the violence. “The shooting incident proves that the people at the heart of the protest are violent in nature. They believe in bullets and bombs,” said Manoj Tiwari, the Delhi chief of the Bharatiya Janata Party (BJP), making the same mistake.

A cursory glance at the shooter’s social media posts before the Jamia attack reveals how he was radicalised into hating and attacking Muslims. He had posted photographs of himself with radical Hindutva leaders such as Deepak Sharma, images of weapons and messages such as: “Shaheen Bagh, game over” and “I am giving azadi (freedom)”. Just moments before he attacked the Jamia students, he had been live streaming on Facebook.

The Delhi Police claimed after arresting him that the shooter was a 17-year-old minor. He was released on bail in a matter of months. Since he was a minor at the time of his crime, he cannot be identified by name in media reports. Likewise, Kapil Gurjar, the man who had opened fire at Shaheen Bagh, was also let off on bail. The BJP claimed that Gurjar was a member of the Aam Aadmi Party. However, Gurjar later joined the BJP, but had to leave almost instantly after a huge social media uproar. More recently, the Shaheen Bagh shooter’s picture with BJP leader Kapil Mishra, the man who coined the slogan of ‘desh ke gaddaron ko goli maro (shoot the traitors)’, went viral on social media. On April 14, 2021, both Gujjar and the Jamia shooter appeared at a ‘Hindu panchayat’ at Jantar Mantar, New Delhi, in which they raised issues such as ‘illegal infiltration’ and “population control”. Poster for the ‘Hindu mahapanchayat’.

Now the Jamia shooter is back in the headlines for a number of extremely vitriolic hate speeches and murder calls made at various ‘Hindu mahapanchayats’ in Haryana.

On May 30, he had made an incendiary speech via Facebook Live at a mahapanchayat in Indri village, Haryana, calling upon Hindus to assemble in support of the accused in the case of the kidnap, lynching and murder of a man named Asif Khan on May 16.

Asif, who was from Khera Khalilpur village in Nuh, Haryana, had been kidnapped on May 16 and then lynched to death by a mob. When the Nuh police named Hindus among the accused in Asif’s murder, the matter was communalised and at the ‘Hindu mahapanchayat’ organised reportedly by the Karni Sena at Indri village on May 30, Asif’s murder was justified.

“A eunuch named Asif has been killed because of his deeds … Look at Hindu unity … We won’t even spare your unborn if our sisters’ honour is touched … we’ll set the area on fire,” the Jamia shooter had said in a Facebook Live.

On July 3, 2021, he appeared in a Facebook Live video* with one R.B. Gurjar who had also, at the May 30 mahapanchayat in Indri, called upon Hindus to mobilise in favour of the accused in Asif’s case. In this Facebook Live, the young man mobilised the crowd for a mahapanchayat to be held in Pataudi on July 4. Focused on ‘love jihad’, he posted messages such as: “For the honour of our daughters and sisters we have to answer in the language our enemy understands. This action needs a proper reaction. We have to smash the heads of the the love jihadi snakes.”

On July 4, 2021, the Jamia shooter led a massive mob of hundreds of men into the Ramlila ground, the venue of the Pataudi mahapanchayat. They chanted slogans that included ‘Jai Shri Ram’ and ‘Mullo ka na qazi ka, ye desh hai veer Shivaji ka’ (This country belongs to brave Shivaji, not to Muslims or qazis).

“When Muslims are murdered, they will shout Ram Ram,” he said in his virulent speech* at the Pataudi event. The speech went viral on social media and has been posted on a Twitter account in his name. The Jamia shooter asked Hindus to avenge love jihad by abducting Muslim women. “Can’t we abduct a ‘Salma’?” he demanded. This was echoed in the video posts on his fan pages. In one animated video posted on his fan page*, an Indian army soldier abducts a Muslim woman clad in a burqa.

In March 2021, the Jamia shooter, accompanied by hundreds of followers, had appeared for a meeting at the Dasna temple in Ghaziabad after one Shringi Yadav assaulted a minor Muslim boy for trespass. The crowds welcomed him with loud cheers of ‘Jai Shri Ram’ and ‘Shaheen Bagh ka yoddha zindabad’ (Long live the warrior of Shaheen Bagh).

“Non-violence is a part of religion but violence is very important for religion … Revenge is the purest emotion … When it comes to religion, don’t think, just act (kaand kardo),” he had told the crowd* at Dasna temple.

In another social media post* in the same month, he had sought support and strength to “finish the jihadis”.

In an undated video, he appears with hundreds of men and a dozen bodyguards. The crowd can be heard* raising the pro-CAA Hindutva slogan ‘Desh ke gaddaro ko goli maro, saalon ko’, a war cry popularised by BJP leaders like Kapil Mishra.

While the Delhi and Haryana police are yet to take cognisance of these speeches, there is no dearth of evidence to prove how the young man violates Indian criminal law daily and proudly broadcasts it on social media.

Celebrity for the far right

After the Pataudi mahapanchayat, the Jamia shooter posted videos of one Monu Manesar, a self-styled gau rakshak (cow vigilante) on his Instagram account with thousands of followers. Manesar was introduced by the host as someone, “who shoots and gets shot while protecting cows”. Manesar had also spoken at the Pataudi mahapanchayat and his solution to the  ‘love jihad’ issue was a direct call to murder. He demanded in his speech that Muslim men who commit love jihad should be killed and sought a list of ‘love jihadis’ to be killed by his team while referring to the “big brother”, seemingly a reference to the BJP, who would ‘save’ his team, presumably from the law.

On March 14, 2021, the Jamia shooter boasted* that his team members had saved six cows being transported from Haryana in a pickup van. He asked people to inform him and his team if they had any information about the transport of cows.

More chillingly, there is a series of violent videos and pictures on his timeline under the title of Gau Raksha or cow protection. There are videos, reels and pictures of men ramming a car with other cars, trucks and vans.

In one video*, a driver tracks a Maruti Eeco that approaches from the opposite direction. When the Eeco tries to move away, the driver in the young man’s video crashes into it. He himself then appears with the damaged Eeco. He credits Manesar for this video.

In another video* in which the shooter tagged one Surender, a gau rakshak whom he refers to as “heavy driver”, we see a damaged white Scorpio with blood on the steering wheel and cattle in the back. This is followed by posts that show two unidentified men lying in a pool of blood*. The caption of all these videos is ‘Gau Raksha’. While the deaths or injuries and the identification of the two men in this video are a matter for police investigation, almost all the comments endorse this act and some even ask the shooter to kill the two men, who are referred to as ‘asuras’ or demons. Hundreds of commenters state that they want to do to Muslims the same thing that happened to the two men lying in the pool of blood. Most of the young men who commented want to be recruited into the ecosystem in which the Jamia shooter thrives. 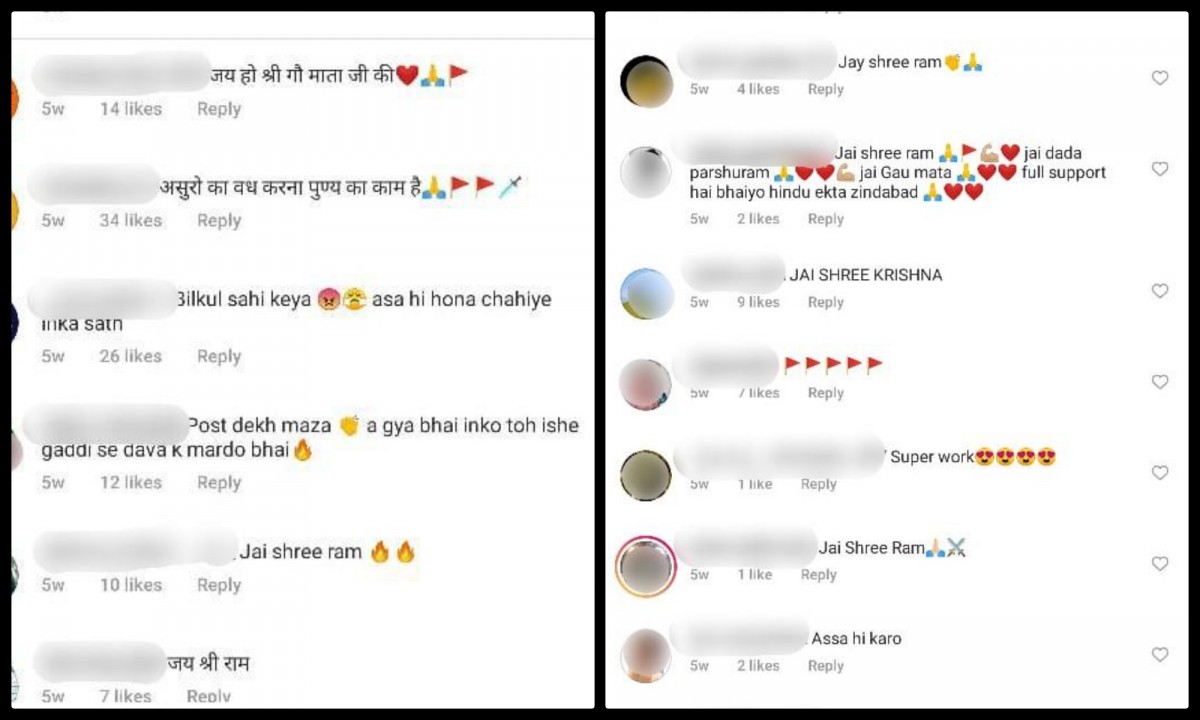 After the shooter posted photos of injured men lying in pool of blood with the caption “Gau Raksha”, people in the comments were cheering and demanding the lynching of Muslims.

After his release on bail last year, he visited the Dauji Mandir in Jewar* with 10-12 bodyguards and a mob of supporters. Popular right wing YouTuber Rahul Arya, who runs the Thanks Bharat page (1.3 million followers), can be seen with him. According to some comments on this post, Rahul Arya had organised the visit. Arya had been part of a ‘social media warriors’ meeting in September 2020, in which he had been praised by Baba Ramdev for ‘exposing the communists, Muslims and anti national forces’.

The first Hindutva leader to endorse the Jamia shooter was Yati Narsinghanand in August 2020. Narsinghanand’s virulent speeches during the pro-CAA movement and right before the February 2020 violence in New Delhi were documented by The Wire. In the video with Narsinghanand, the Jamia shooter admits that he turned 18 in April. Hence by his own admission he’s at least 19 now. Narsinghanand describes him* as one of the two brave and alive Hindus (the other is Kapil Gujar) who defended Hindu honour. He abuses Muslims and asks the shooter, “How many kids will you have … these pigs have 12.” “At least five,” he replies.

Also read: For Hindus to Defend Criminals Just Because They Are Hindu is unHindu. And Plain Wrong.

On April 11, 2021, he announced* that he had received the ‘Sanatan Dharm Rakshak Samman 2021’ (a gallantry award) from an organisation called Sanatan Hindu Sansad. Notably, he conveyed special thanks to the BJP member of parliament Pratap Sarangi for the award. On the official page of the Sanatan Hindu Sansad is a photograph of Pratap Sarangi gracing their launch event as the chief guest on January 12, 2021 at the ISKCON auditorium.

On April 9, 2021, the Jamia shooter posted a video* and wrote in the caption that he would soon prepare at least 100 more youths like him. It is not clear if the visibly minor boys in the video are somehow connected to him, but several videos like this one make it clear that he wants to take his mission to Hindu youths.

Almost 15 months have passed since the Jamia shooting and the Jamia shooter has come of age. He is now openly inspiring and recruiting young Hindus to join him in his mission. He is not shy about openly provoking and inspiring anti-Muslim violence and the comments on his posts are filled with young Hindus requesting him to let them join his mission to protect their religion.

Presently, he is asking people to make videos in his support. On July 6 2021, he appeared in another Live* on Instagram in which he raised the slogan “Jab mulle kaate jayenge, tab Ram Ram chillayenge” (When Muslims are cut, they will shout Ram Ram) and said he was ready to go to jail for chanting this slogan.

Now the Delhi Police has no reason to treat the Jamia shooter as a minor. On July 6, RTI Activist Saket Gokhale filed an application with the Delhi Police, requesting the cancellation of the bail granted to the shooter immediately for the communal hate speech he made at the Pataudi mahapanchayat. In a separate complaint to Gurugram police, Gokhale has also demanded his immediate arrest.

*Note: The Wire has the hyperlinks to all of the Jamia shooter’s videos and posts mentioned. While we cannot share them here as that would identify him, we would be willing to share them with law enforcement in the event that these are required for any criminal investigation into his activities.

Kaushik Raj is a Delhi-based poet and Alishan Jafri is a freelance journalist based in Delhi.