In spite of their protests making it to the frontpages of local dailies, no action has been taken. Some of them have had to pay Rs 3,500 for private buses to Bengal. Migrant workers were lathi-charged by the police after they protested against lack of rations. Photo: By special arrangement

Jaipur: More than 10,000 Muslim migrant workers from Bihar and West Bengal residing at Painters’ Colony in Jaipur’s Nahri ka Naka area, who have only been given dry ration packets since the nationwide lockdown was imposed on March 25, took to the streets on Sunday asking to be sent back home.

They claimed that only around 400 packets, each containing a total of seven kilograms of flour, pulses, rice and salt, was distributed among 10,000 people last month.

This, too, only came after volunteers of the CPI(ML), CPM and CPI in the area intervened. The Left parties had started a helpline, “Samarth,” in the city, from the first day of the lockdown.

“We spoke to the collector several times but nobody intervened. Even the dry ration supplied to them was not adequate even for half of them,” Rahul, a CPI(ML) volunteer in the area told The Wire. About 10-20 migrant workers live in a room at Painters’ colony in Nahri ka Naka area.

In this Muslim dominated locality of Nahri ka Naka, between 10 and 20 workers usually rent small rooms at about Rs 400 per month. Most of them are daily wage workers and since the lockdown, have run out of money.

Protesting on the street occurred to them as the last option to compel the authorities to take notice of their condition.

“Most of us had begun to ask around in the locality for some flour or rice because there is absolutely nothing to eat. What else could we have done?”Hashim, a worker from West Bengal, told The Wire.

“Each time we try to come out on the street looking for food, police deployed in the area beat us with their lathis,” he added.

For the past few days, only those workers whose families were able to transfer money to their accounts were able to purchase food.

The protesters have claimed that police lathi-charged them on Sunday, as a result of which several of them were injured. Mohammad Jalal, a migrant worker from Malda district in West Bengal who suffered a fracture in his hand during the clash said he was out to look for food but was beaten up.

Also read: COVID-19 Is Leading to a New Wave of Social Stigma

The authorities have denied the allegations made by the protesters. Speaking to The Wire, Sajjan Singh Kaviya, station house officer at the Shastri Nagar police station in Jaipur said, “About 500-600 people had gathered on the streets in the Nahri ka Naka locality at around 2 pm on Sunday. The police dispersed them but didn’t lathi-charge anyone. We, in fact, have taken no action against them for breaking the lockdown.” 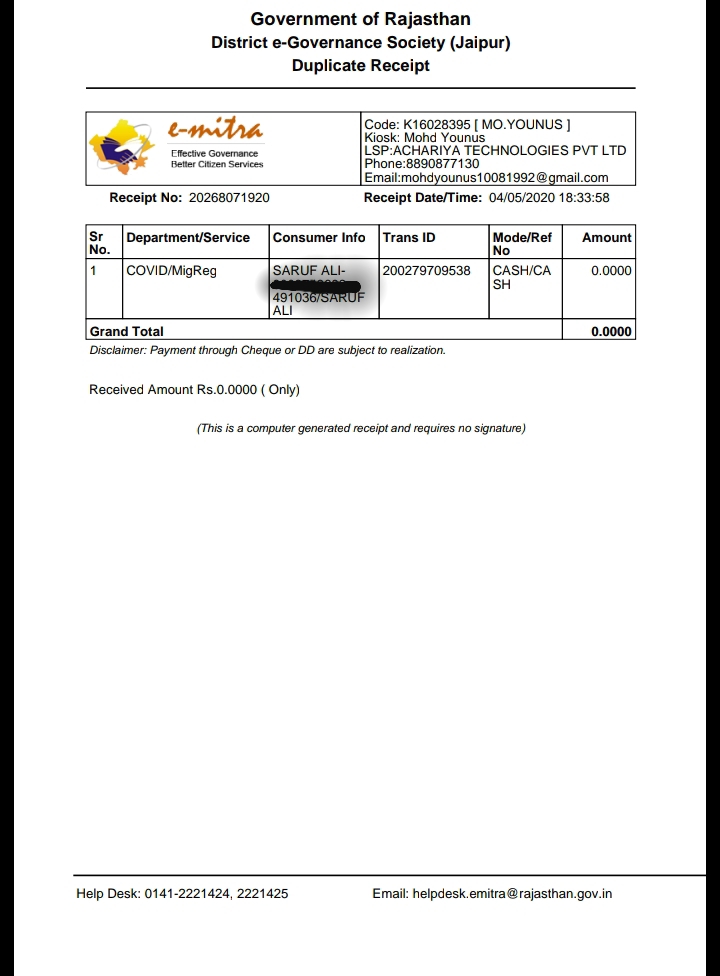 It’s been a week since the migrant workers registered on the state government’s e-mitra portal.

Many of these migrant workers, had registered themselves on the e-Mitra portal launched by the state government to reach out to the stranded people. However, none of them have received any confirmation so far.

“It’s been days that we have registered on the portal but our status is still displayed as “pending”. There are lakhs of people and the government is arranging for only thousands,” said Nizam, a worker from Bihar.

Even after their protest made it to the front pages of the local dailies, they have not received any food or dry ration as of now. “Our condition is the same as it was before the protest. We are still waiting for ration,” he added.

The workers also fear that staying so close to each other in one room could prove hazardous from a health perspective given the crisis. “The government keeps talking about social distancing, then why don’t they notice how we are forced to live in such tiny rooms where practising social distancing is impossible,” added Hashmi.

Meanwhile, the workers have been told that if they are able to deposit over Rs 3,500 as fare for a private bus, they could be taken back to West Bengal.

Mushtaq Ahmad, a worker from Malda district in West Bengal, was waiting outside the Jaipur Collectorate on Monday to seek a permit for himself and other workers who were able to pay the amount. “The private buses have told us that it would cost them around Rs 1.1 lakh for the trip to Bengal and back to Jaipur. So, they would allow only those could afford the ticket.”

Most of the workers, however, don’t have money to pay for the fare of private buses. “If the  Mamta Banerjee government will not intervene, we will stage another protest soon,” he added.

In Rajasthan, over 8,12,423 migrant workers have registered themselves on the government portal to reach their homes in other states, while only 91,398 of them have been sent back so far.