Tell Hindu Girls That Muslim Men are 'Terrorists', and Other 'Lessons' from an RSS-backed 'Hindu' Fair

Jaipur's district education office made it compulsory for lakhs of children from government schools to attend the event where Hindutva outfits spread propaganda about 'love jihad' and gau raksha. 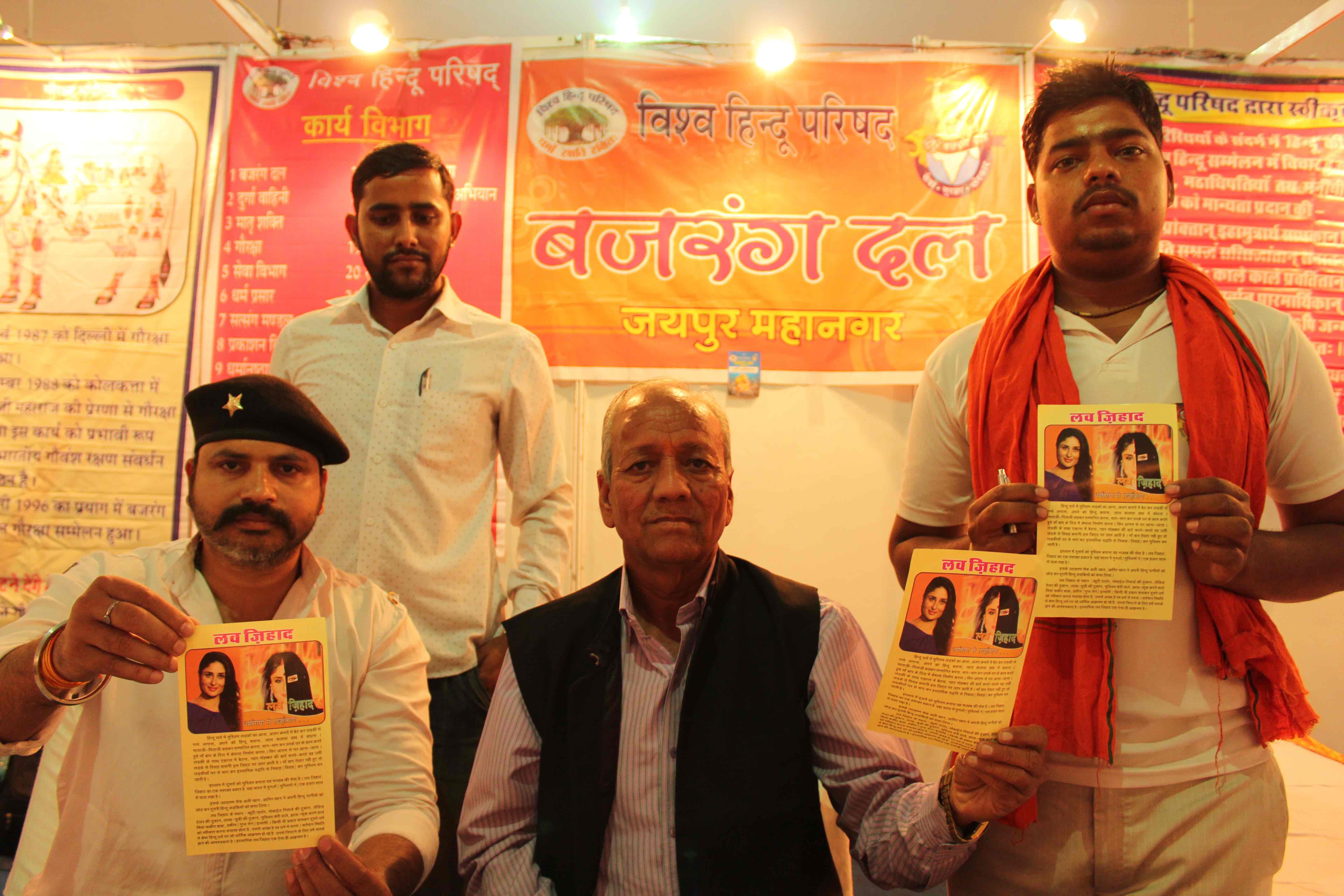 The Bajrang Dal stall at the HSSF fair had a detailed manual on ‘love jihad’. Credit: Shruti Jain

Jaipur: On paper, the five-day fair organised by the Hindu Spiritual and Service Foundation (HSSF) which got underway here on Thursday aims to “philosophically explain and practically expound how Hindu spirituality and traditional Hindu lifestyle provide a solution to contemporary challenges – family and human values, women’s honour, patriotism, environment, ecology and pollution”.

Judging by some of the “solutions” on offer, however, the event seems to have served as a platform for Hindutva outfits to share their toxic wares on unsuspecting visitors – including lakhs of students from local government schools, for whom attendance was made compulsory.

“The orders (for government schools to bring their students) were given so that the students can be exposed to our rich Hindu culture. What else could be the motive?” Ratan Singh, district education officer, told The Wire.

The Chennai-based HSSF describes itself as an independent organisation. In reality, it is linked to the Rashtriya Swayamsevak Sangh (RSS) and its affiliate, the Rashtriya Sewa Bharati. RSS and BJP leaders are among those who lead the foundation’s activities in different parts of the country, though most of the Hindus who attend the fairs they organise do so in the belief that it is a religious event rather than one with any political agenda.

“The HSSF just provides a platform for organisations engaged with the Rashtriya Sewa Bharati to impart services to society. Its ideology is the same as that of the RSS, but the two are not linked,” Gunwant Singh Kothari, RSS pracharak and HSSF’s national coordinator, told The Wire.

At the fair, the Bajrang Dal was openly distributing pamphlets and manuals on ‘love jihad’ to every female passer-by. When a student refused to accept the pamphlet, calling it “rubbish”, the coordinator, Chauthmal Gupta murmured, “These youngsters don’t listen these days.”

“The reason for using Kareena Kapoor Khan’s case [as an example in the pamphlet] was to make these kids, who idolise all the Khans [referring to film stars], understand that love jihad is a trap,” he added.

Stating that conversion is a 1,000-year-old practice in Islam, the Bajrang Dal manual details the ways in which Muslim men supposedly trap Hindu women – “friendship in school, bike ride, hanging out in restaurants, chatting on mobile, addressing their parents with respect and blackmailing through obscene pictures”. It also prescribes remedies and precautions to the ‘affected’ Hindu family – “frequently check the female’s belongings, call and SMS details, warn the Muslim boy if found with a Hindu girl, call Muslims as disgusting/terrorist/smuggler/traitor/Pakistan supporter in front of females at home”. 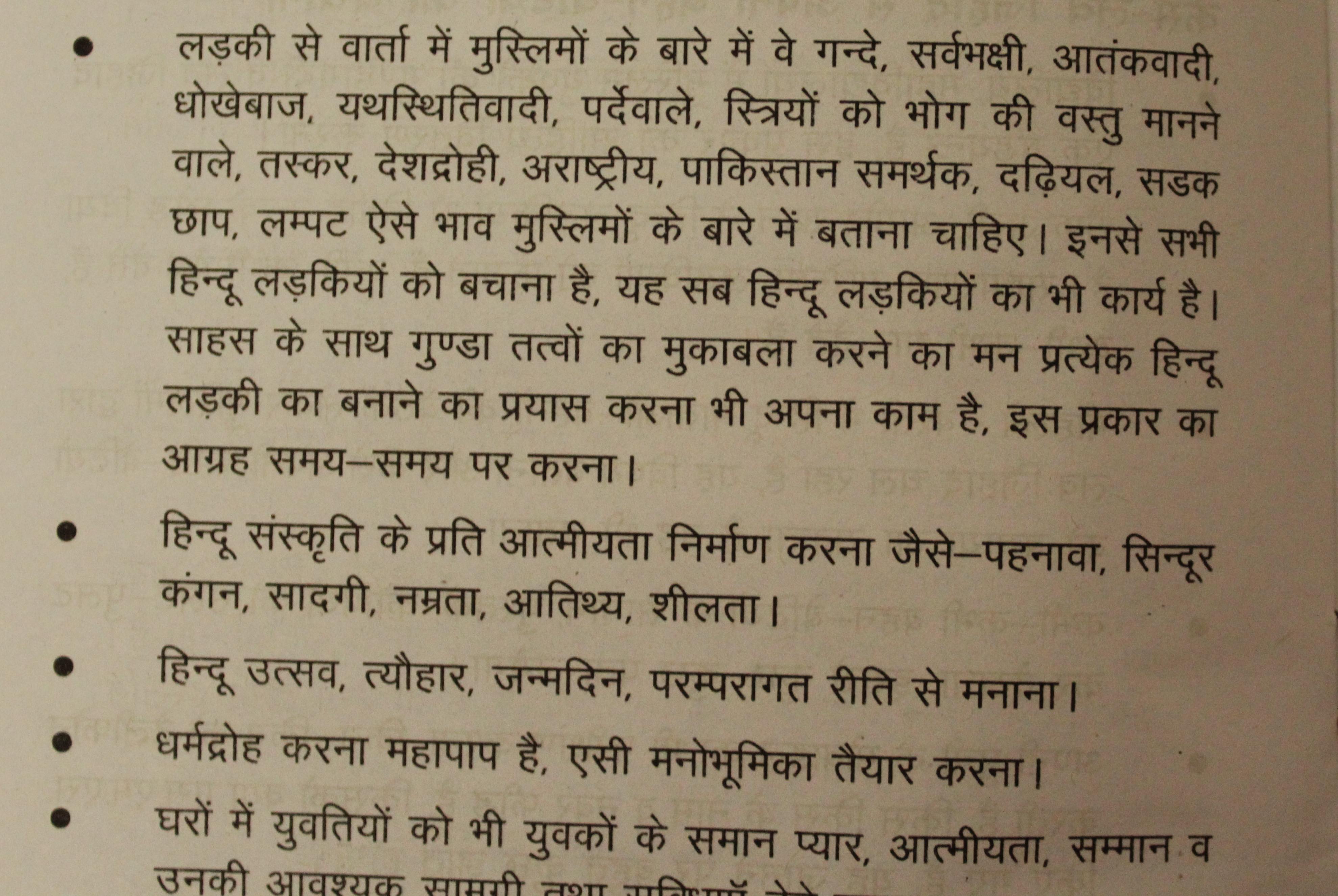 “Tell your daughters that Muslims are dirty, terrorist, exploiters of women, traitors, pro-Pakistan and lumpen….” From the Bajrang Dal pamphlet on ‘love jihad’.

The manual also claims that Muslim men are paid according to a rate card for ‘accomplishing’ the conversion of Hindu women. “For each conversion, Muslim men are paid in lakhs,” Gupta told The Wire. Ironically, if a Muslim woman is converted to marry a Hindu man, the manual encourages his family to accept the union. If a Hindu woman wants to marry a Muslim man, the family is told to ask the man to convert to Hinduism. Incidentally, the ‘rate card’ – which featured prominently in a show anchored by Times Now editor Rahul Shivshankar in June this year – has been exposed as fake news by AltNews.in, while ‘love jihad’ itself was revealed in a sting operation by CobraPost in 2015 to be part of a fabricated campaign by the BJP and RSS in Uttar Pradesh for political gain. 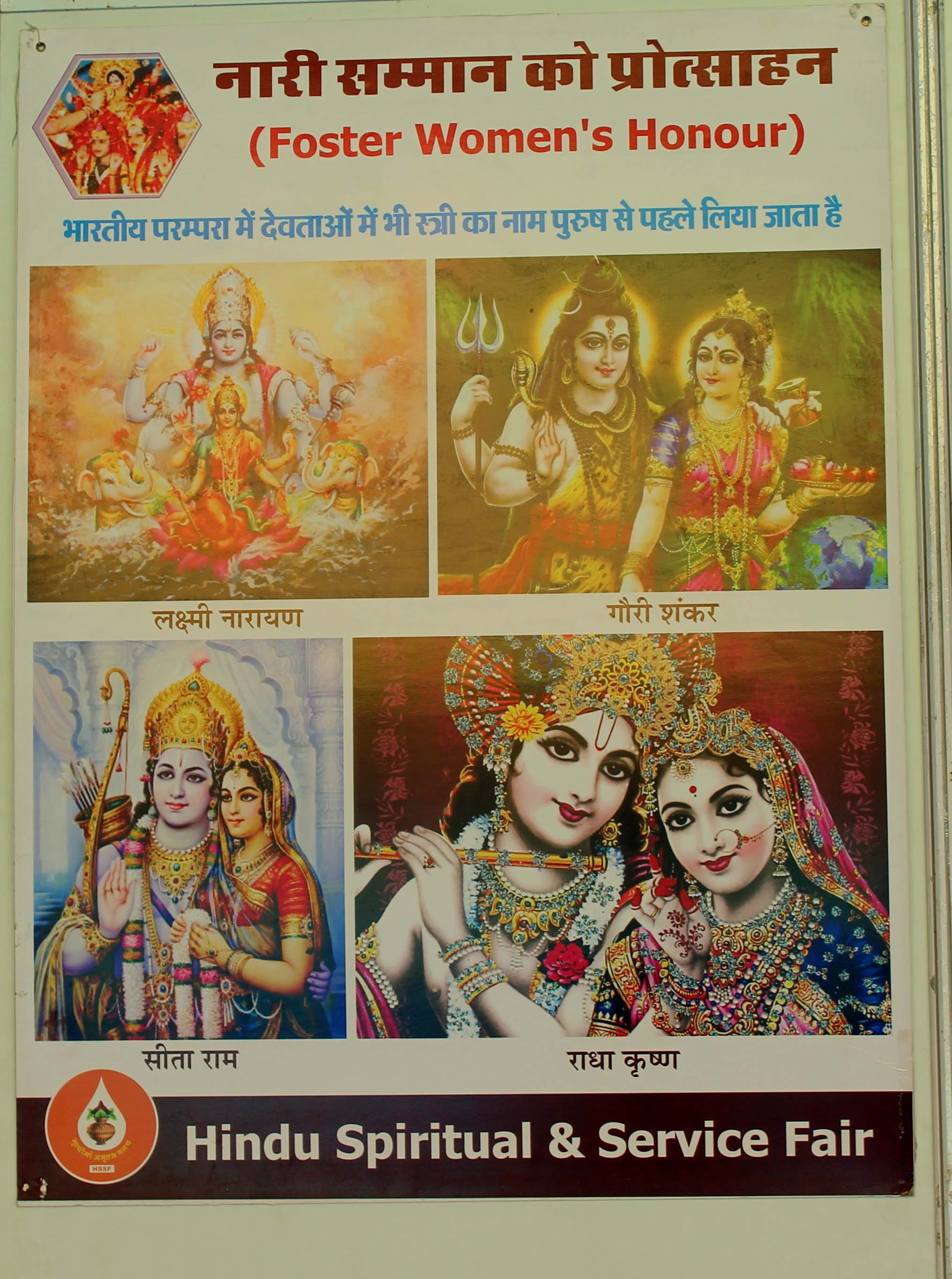 Gau raksha and cow as the national animal

Not satisfied with the Narendra Modi government’s ban on cattle trade for slaughter (currently stayed by the Supreme Court), the Bhartiya Gau Kranti Manch demanded at the fair that those found to be killing cows be given the death penalty.

“The slaughter ban is only on paper, we want the cow to be declared as the national animal,” said Tara Chand Kothari, associated with the Manch.

“All that you hear about cows these days is because of our guru, Gopal Mani ji. He has done a gau katha in every state so that the country develops sensitivity towards our cows,” he added.

Talking about the cow vigilantes, Kothari said, “Not all gau rakshaks are bad. It is the media that highlights them negatively.”

“Gau rakshaks have to take the law into their own hands because the government is not doing anything to save our mothers [the cow]. Gau mata is the god of gods.”

Brochures issued by the Bajrang Dal blame the Congress and other opposition parties for not imposing the ban on cow slaughter.

Addressing students from various government schools on cow protection, Mool Chand, a speaker at the event, said, “Even goats and buffaloes are kept at homes for milk but they can’t be called mother, only the cow is our mother.” 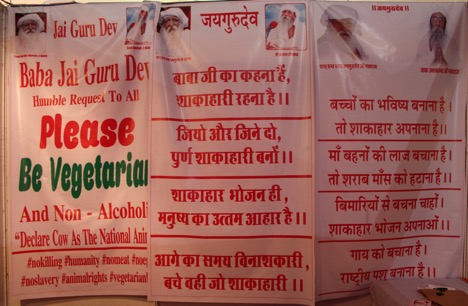 In a ‘humble’ request, Baba Jai Guru Dev from Ujjain said that people should become vegetarian if they want to make their children’s future brighter, save women’s honour, attain immunity from diseases and even just survive.

Giving out a ‘vegetarian pledge’ form to the visitors, he added, “Baba has set a world record of converting thousands of non-vegetarians into vegetarians through his lectures.”

Based on ‘Hindu’ reasoning, children at the fair were also asked to conserve forests and wildlife because “wildlife has served the Hindu gods and goddesses and hence it should be conserved”.

In a programme meant to promote ecological conservation, children were made to take part in a tulsi and gau puja. Most of them, however, weren’t quite sure why they were doing it.

“We usually pray to god before the beginning of any programme and that’s why I think we were asked to pray to the tulsi plant,” said Krishna, a class X student from Govindpura government school who took part in the puja. 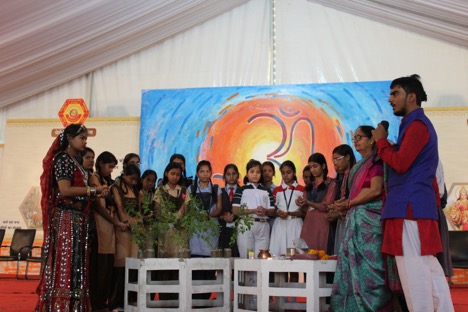 Ram Mandir, a symbol of nationalism

Associating the Ram Mandir dispute with the sentiments of crores of Hindus, the Vishwa Hindu Parishad at the HSSF fair reiterated the demand for constructing a Ram Mandir in Ayodhya. A brochure they distributed even asked people to “keep in mind the larger benefit for Hindus while voting”.

When asked about the relevance of such fairs, Hemraj Chaturvedi, a volunteer, replied, “Have you seen Muslims organising such fairs? It is only the Hindus who want future generations to know about their holy traditions.”

Speaking to The Wire, Rajiv Gupta, former professor of sociology at University of Rajasthan said, “Such events are not spontaneous, the students are forced to attend them. And the RSS always tries to hide its association with such Hindu organisations and events, even when they are affiliated to it.”

The HSSF recently tied up with the Rajasthan government to organise a massive ‘Vande Mataram’ recital. All students involved with the National Service Scheme were made to take part in the event. Though the aim was to foster “nationalism” and “love for the country”, the tricolour hoisted at the event did not contain the Ashok Chakra.

Shruti Jain is a Jaipur-based journalist.