Delhi Police has also filed an FIR against the organisers of the original procession on April 16 for allegedly not seeking permission for it. 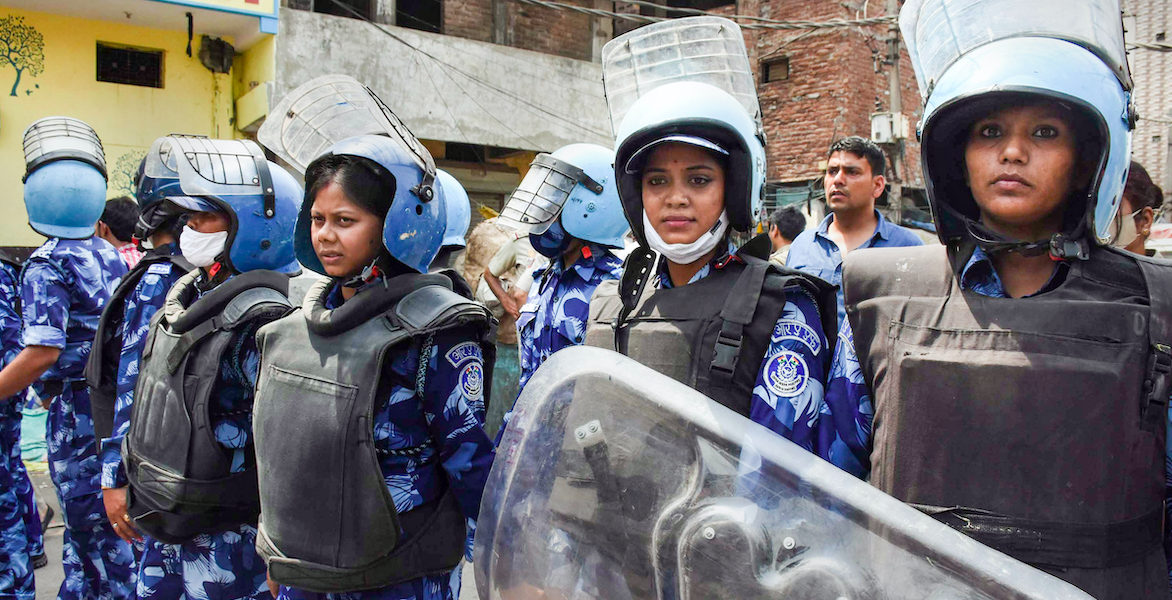 Women paramilitery personnel keep vigil after bricks were allegedly thrown at Delhi Police Crime Branch team at C-block in Jahangirpuri, during their investigation into clashes between two communities during a Hanuman Jayanti procession on Saturday, at Jahangirpuri in New Delhi, Monday, April 18, 2022. Photo: PTI

New Delhi: Delhi Police has arrested a 28-year-old man who was allegedly seen with a gun during the communal violence in the city’s Jahangirpuri area three days ago.

As The Wire has reported, communal violence broke out in the north Delhi neighbourhood on the evening of Saturday, April 16, after a Hindutva procession allegedly attempted to wave a saffron flag in front of a local mosque. By Sunday evening, the police had arrested 22 people for the violence – all Muslims. Some Hindu men have been arrested since then, reports said.

Delhi Police has also registered an FIR against organisers of the original procession for allegedly not seeking permission, Indian Express has reported.

A fresh round of stone-pelting was reported from the area on Monday afternoon, just days after communal clashes left several people injured.

The latest man arrested has been identified as Sonu alias Imam alias Yunus, a resident of C-Block in Jahangirpuri, police said.

“A video was being circulated on social media platforms on Sunday, showing a man in a blue shirt opening fire during the riots in Jahangirpuri. He has been apprehended on Monday by the special staff of northwest district from Mangal Bazaar Road and one sophisticated pistol was recovered from his possession,” Deputy Commissioner of Police (Northwest) Usha Rangnani said.

“A case under section 25 of the Arms Act has been registered. Sonu has disclosed that he had fired his pistol near Kushal Chowk during the incident. Further investigation is in progress,” the DCP said.