Hindus, Muslims Carry Out a 'Tiranga Yatra' to Appeal for Peace in Violence-Hit Jahangirpuri

Residents said that while things had not returned to normal as yet, they were hoping that the next few days would bring peace. Members of both Hindu and Muslim communities take out a Tiranga Yatra at the communal violence-hit Jahangirpuri area, in New Delhi, Sunday, April 24, 2022. Photo: PTI/Shahbaz Khan

New Delhi: Hindus and Muslims on Sunday evening together took out a ‘Tiranga Yatra’ in Jahangirpuri’s C block, the epicentre of the April 16 clashes.

The rally was facilitated by the Delhi Police, who deployed a heavy security in the area. It allowed about 50 people from the two communities to participate in the rally. 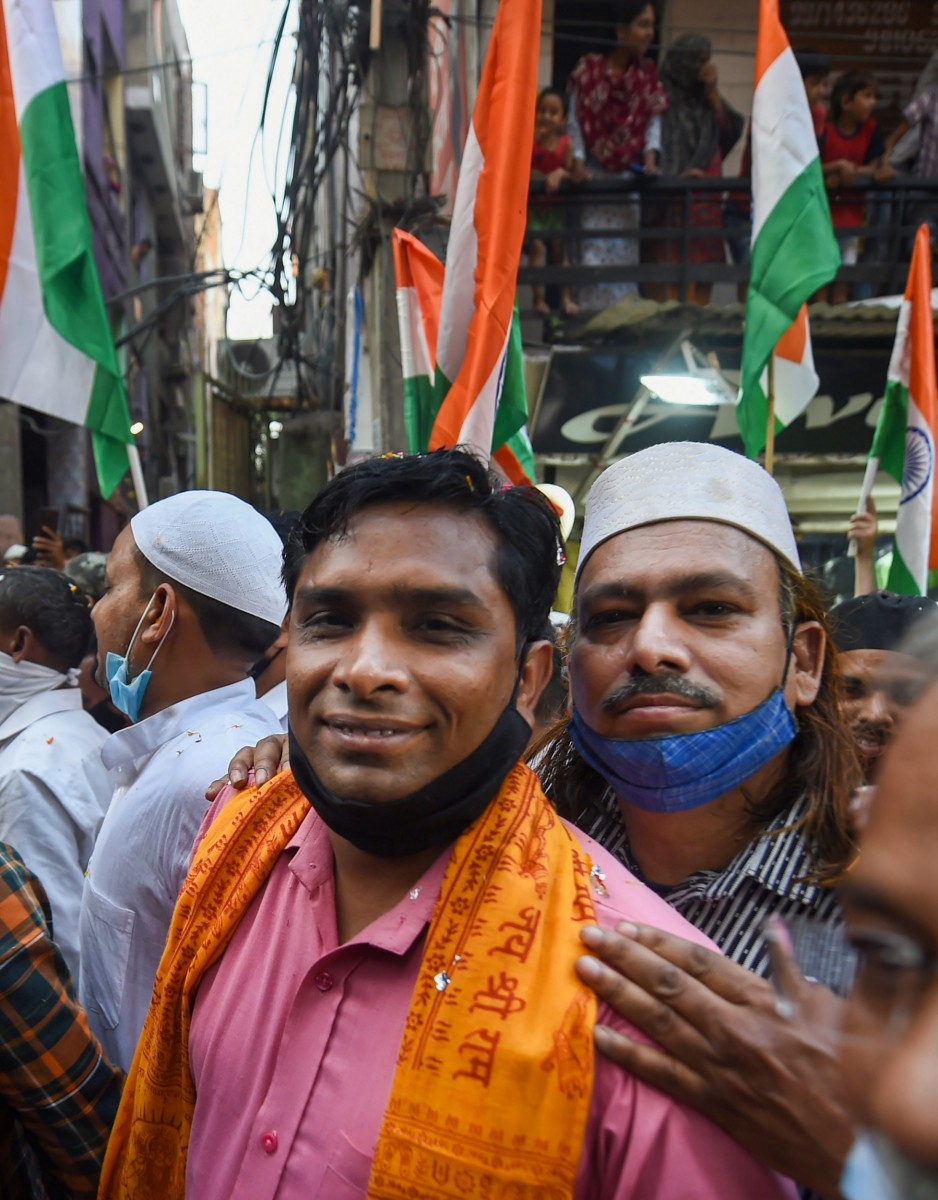 Members of both Hindu and Muslim communities during a Tiranga Yatra at the communal violence-hit Jahangirpuri area, in New Delhi, Sunday, April 24, 2022. Photo: PTI/Shahbaz Khan

Waving Indian flags, the participants raised slogans of ‘Bharat Mata ki Jai‘, ‘Hindu Muslim Sikh Isai Aapas Me Hai Bhai Bhai’ and ‘Vande Mataram‘. Residents of C-Block lined the streets, while others stood at their windows and balconies to witness the rally. They, too, waved the tricolour and showered flower petals at those who participated in the event.

“This rally gives the message of harmony and peace. The members of both communities have showcased that the Tiranga is of utmost priority. They have the given the message that the nation comes first,” DCP North-West Usha Rangnani said.

The rally, which started and culminated at Kushal Chowk, covered nearly a kilometre in and around C-block.

“We are very happy that such an initiative was taken. This really showcases the true image of Jahangirpuri. Hopefully, this will help restore peace,” Aslam, a local, said.

Indramani Tiwari, the president of the Residents’ Welfare Association, who represented the Hindu community, expressed hope that the rally will help restore ties between the two communities and bring back confidence among the locals.

“Today, flower petals were showered from the same place that witnessed stone pelting on the day of the clashes. There was a sense of fear among the people after the April 16 violence. We requested the police to allow us to carry out the Tiranga Yatra so that a message of unity can be sent among the people and the atmosphere of terror can be eliminated,” Tiwari said.

Businessman Rakesh Mehra told The Hindu that the march was “a first step towards peace”, and blamed the violence on “outsiders”. “Those who caused disharmony here were all outsiders…one of my friends was also injured in the clashes but I want to forget what happened on that day and spread the message of peace.”

Ishrar Khan, who sells mobile phones and accessories, told the Indian Express, “Part of my shop was razed during the drive. I was hurt as many people were calling us Bangladeshis and my neighbours called me pattharbaaz. Today is different, I stepped out and everyone hugged me. We may not talk everyday but we marched together. I feel we are all brothers and should make amends. I went home after the yatra for Roza. I hope the situation gets better and we celebrate Eid…” 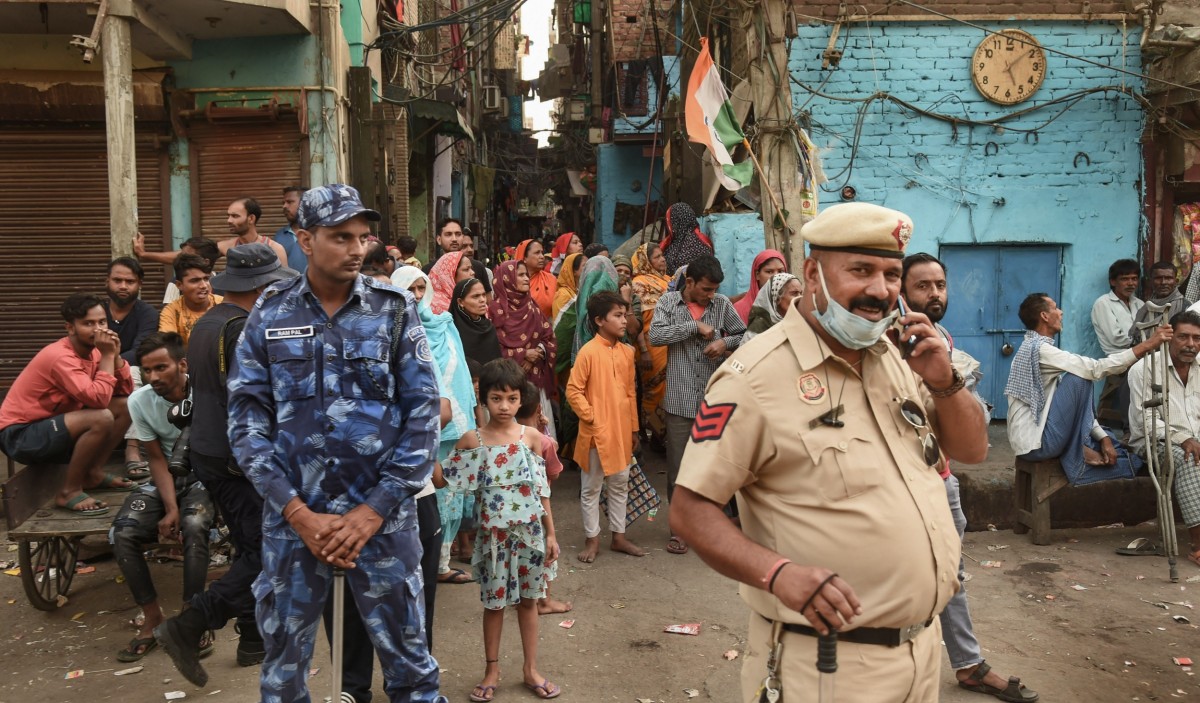 Security personnel during a Tiranga Yatra taken out by members of both Hindu and Muslim communities, at the communal violence-hit Jahangirpuri area, in New Delhi, Sunday, April 24, 2022. Photo: PTI/Shahbaz Khan

Residents said that while things had not returned to normal as yet, they were hoping that the next few days would bring peace. “We are not on talking terms with them (Hindu neighbours) at present but that doesn’t mean we hate each other. We are ready to move on. Things will get better soon. My children and grandchildren stepped out of the house after days. We feel better already. There’s peace in the area,” 60-year-old Kader Khan, who sells chicken, told the Indian Express.

There was a heavy deployment of police officials, along with the Central Reserve Police Force and Rapid Action Force personnel, to maintain the law and order situation during the rally. They were armed with teargas guns, and drones were used for surveillance.

DCP Rangnani said that the security deployment is expected to reduce in the coming days. Some of the deployment has been already removed. As the situation improves further, it will be reduced even more, she said.

Meanwhile, shops in the inner lanes of Block-C have opened for business while those on the main lane remain shut. Vegetable carts and and hawkers were also back to business.

The DCP said that the situation is returning to normal.

Clashes broke out between the two communities during a Hanuman Jayanti procession in Jahangirpuri, in which eight police personnel and a local resident were injured. Days later, the Bharatiya Janata Party-led MCD carried out an ‘anti-encroachment drive’ in the neighbourhood, without giving residents prior notice. Muslims felt targeted by this drive, and accused the administration of selectively targeting their livelihoods.

The demolition drive was finally called off hours after the Supreme Court ordered a stay on it.