Alleging police brutality, the family of the main accused – who is being portrayed as 22 in the media – has said the minor was home when the incident took place. A torched scooter following the clash at Jahangirpuri on Saturday, April 16, 2022. Photo: PTI

New Delhi: The Delhi police have arrested 22 people in connection with the communal clash broke out in North Delhi’s Jahangirpuri area on the evening of Saturday, April 16, after a Hindutva procession allegedly attempted to wave a saffron flag in front of a local mosque. By Sunday evening, more Muslim youth in addition to the 14 named in the FIR had been picked up.

On the occasion of Hanuman Jayanti, a procession of Bajrang Dal members undertaking a Shobha Yatra reportedly reached the mosque in Jahangirpuri’s Block C at 5 pm, when the incident took place. Speaking to The Wire, resident of the area Salman Khan said, “The mob with members of the Bajrang Dal went outside the mosque and tried to wave the saffron flag there. They were also dancing to loud music.”

“The shopkeepers in the area tried to stop the mob,” Khan continued, “while a few women got involved and asked the mob to go away. This turned violent where a few people were injured.”

“But the Delhi police took the matter into their hands immediately and made the mob leave. The situation is peaceful at the moment,” he added.

The incident reportedly involved stone-pelting from both sides and even gunshots fired from a country-made pistol. Some vehicles were reportedly set ablaze during the incident.

“Things escalated and both communities started pelting stones at each other. They damaged public property and torched some vehicles,” a senior police officer said.

According to a report by NDTV, nine people were injured during the scuffle, including eight police officers and one civilian. Sub-inspector Medhalal Meena, one of the officers injured, reportedly suffered a gunshot wound to his hand.

Ganesh, another local resident who was sitting with Khan said that the violence broke out primarily on the main road, where the procession was taking place.

“There was a mob that tried to do something outside a mosque but the police stopped it immediately. The local shopkeeper outside the mosque tried to stop the mob, which turned into a clash. But that happened outside the road. The situation is peaceful now,” Ganesh said.

Giving his initial impressions, Vipin L.C., a member of the Communist Part of India – Marxist (CPI-M), who is also part of a fact-finding team consisting of members of the CPI-M and civil society activists, told The Wire that the Shobha Yatra procession had began early on Saturday and had remained relatively peaceful.

However, according to L.C., who is also a resident of Jahangirpuri, the processions had already made two rounds around the mosque since the morning and the Muslims present took objection to the third such round of rallying in the evening.

“Amidst this, the residents told the procession not to pass in front of the mosque,” he said, adding that the group was, at this point, chanting communal slogans and hurling slurs at the Muslim community, which allegedly sparked off the violence.

The fact-finding team has, as yet, not put out a report or a press statement on the matter.

By early afternoon on Sunday, 14 people had been arrested and the police had said that additional suspects had been identified on the basis of CCTV footage and videos uploaded to social media. Towards the second half of the day, more Muslim youth were picked up by the police.

According to the FIR, the incident kicked off when Mohammed Aslam (the main accused) began arguing with the Hanuman Jayanti procession, after which stone-pelting, fighting and violence ensued. While it is being reported in the media that Aslam is 22 years of age, his birth certificate, provided to The Wire by his family, shows that he is merely 16.

According to the police, Aslam fired the bullet that injured sub-inspector Meena and a country-made pistol was confiscated from him. However, Aslam’s sister-in-law, while speaking to The Wire, alleged that Aslam was at home when the incident took place and refuted the allegations that he fired shots during the incident.

Moreover, she claimed that Aslam was not allowed even to get dressed when the police arrested him and that she was manhandled by the officers when they did so.

According to a document accessed by The Wire requesting medical examinations of the accused, all 14 individuals who have been arrested are Muslim.

On the basis of initial investigation, a total of 14 rioters have been arrested in #Jahangirpuri incident, including the person who fired bullets. The pistol used has also been recovered from his possession. Remaining rioters are being identified for strict legal action.

Heavy police deployment had been present in the area since Saturday night and personnel from the Central Reserve Police Force (CRPF) and the Rapid Action Force (RAF) have reportedly been deployed since Sunday morning to maintain peace and keep the situation under control. 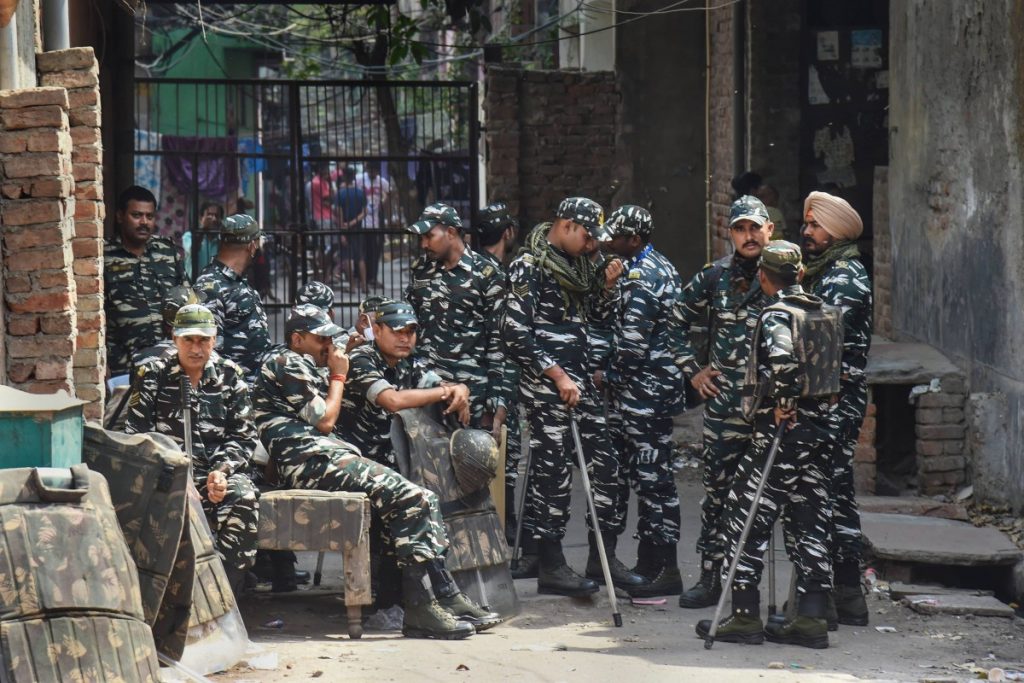 Heavy deployment of security forces can be seen in the area following the clashes. Photo: PTI

Following the incident, Delhi chief minister Arvind Kejriwal took to Twitter to call for peace in the region.

Kejriwal has also reportedly been in contact with Delhi lieutenant governor (LG) Anil Baijal who said that all the necessary steps were being taken and that those guilty would “not be spared”, according to Dainik Jagran.

Pleading with the public not to pay heed to “rumours and fake news” on social media, Delhi police commissioner Rakesh Asthana also took to Twitter, saying that additional force has been deployed in Jahangirpuri as well as other “sensitive areas”.

Strict action will be taken against rioters.

Citizens are requested to not to pay heed to rumours and fake news on social media. (2/2)#Jahangirpuri

Meanwhile, Union home minister Amit Shah reportedly met with Asthana as well as the special police commission (law and order) to get updated on the situation and told them to take all action necessary.

Several Bharatiya Janata Party (BJP) leaders, including Manoj Tiwari and Kapil Mishra, have alleged that the incident was a “conspiracy”. Mishra even said that today’s incident was a ‘terror act’, according to a report by India TV.

The incident has come during a recent spate of communal violence from across the country, the most recent of which are the many attacks reported on Ram Navami, on April 11.

This is a developing story and is being updated with additional details as and when they come in.

(With inputs from Zakir Ali, PTI.)