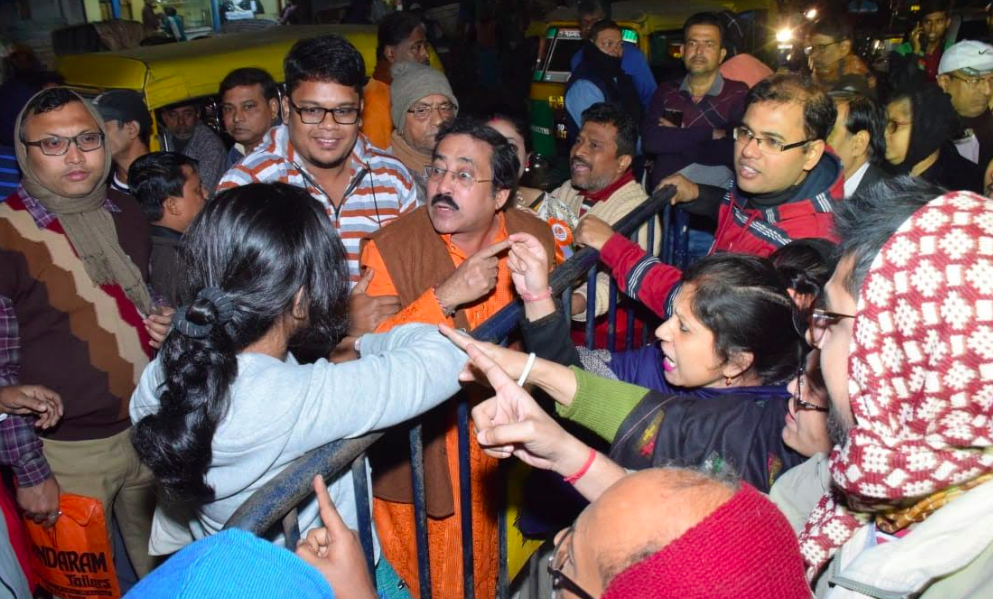 Doyeeta Majumdar (in grey) at the venue of the pro-CAA rally. Photo: Madanmohan Samanta/social media

Kolkata: An English professor at the city’s Jadavpur University was heckled by attendees of a pro-Citizenship Amendment Act rally organised by a rightwing group, when she allegedly protested mildly to anti-Muslim sentiments in a speech.

Around 50-60 people had gathered near the small dais at a busy bus stand, close to Jadavpur University, which has seen steady protests against the CAA by students.

Speaking to The Wire, Majumder said she had stopped to listen to what the speakers were saying in support of CAA. “Barely a minute passed and the speaker started spewing naked hate speech against Muslims. Soon after he started attacking the campus (Jadavpur University), saying this University is the root of all evil, students and teachers all chant ‘Allahu Akbar’ every day,” she said.

She said she shouted ‘lies’ in Bengali, twice. In a few seconds, she was surrounded by a mob, mostly comprising women, who were attending the gathering. “Middle-aged women surrounded me. They soon started pushing me down and hitting me,” said Majumder. 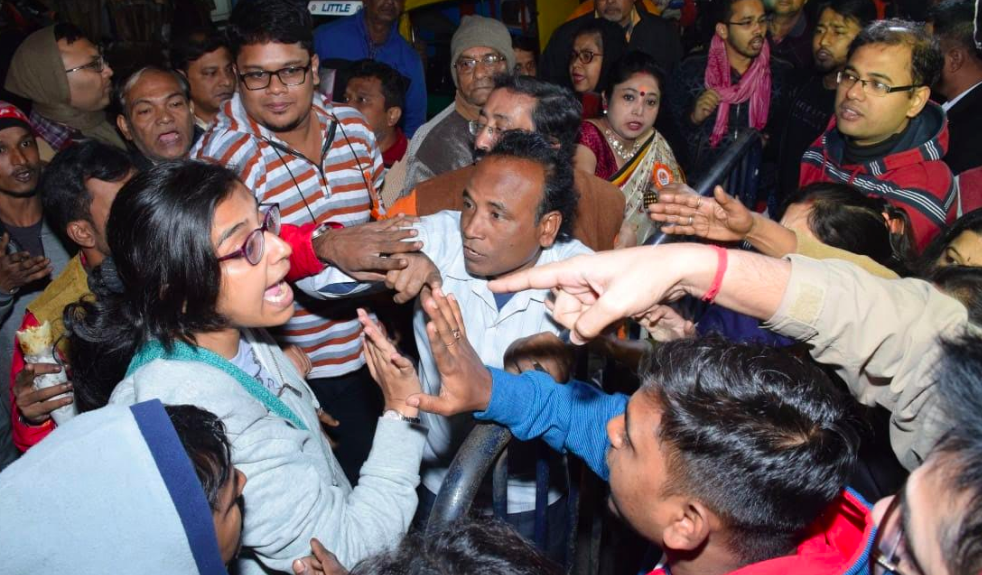 Doyeeta Majumdar (in grey) at the venue of the pro-CAA rally. Photo: Madanmohan Samanta/social media

“A young man tried to protest, he was roughed up too. Ultimately I was dragged kicking and screaming by two presumably BJP men who kept saying, ‘Didi, don’t create a problem here, just leave’,” Majumder said.

The young professor said she did not suffer any serious injuries. She has filed an FIR at the Jadavpur police station.

A senior police official in the station said, “An FIR has been filed, but she hasn’t named anyone in particular. Currently, we are investigating it.”

Jadavpur MLA Sujan Chakrabarty, who is the leader of CPI(M) in the state assembly said he condemned the incident and requested administration to initiate a thorough inquiry. Speaking to The Wire, Chakrabarty said, “BJP is creating an environment of hatred and violence across Bengal after the fallout of the CAA legislation.”

Eyewitness and Jadavpur local Sudip Sengupta said the heckling occurred with little provocation. “She (Majumder) was alone, and there was no provocation from her side. Suddenly, around 10-15 women surrounded her and started beating her up. Later, bystanders came to her rescue,” he added.

General secretary of BJP in Bengal, Sayantan Basu told The Wire that no BJP workers were involved in the incident. “She came there along with a group of people to disrupt the event, but common people resisted,” he said.

Basu’s line finds resonance in the several bullish comments made under a Facebook post Majumdar wrote recounting her experience.

The university has been at the eye of anti-Centre storm for a while now. Last week, West Bengal governor Jagdeep Dhankhar, who is the chancellor of state universities was shown black flags and greeted with “go back” slogans when he had gone to the campus to attend the convocation ceremony. He had to return without attending it following the protests.

Back in September, West Bengal witnessed unprecedented unrest following an incident where a section of the students allegedly “heckled” Babul Supriyo, the Union minister of state for environment, forest and climate change. Supriyo was attending an event organised by the Akhil Bharatiya Vidyarthi Parishad (ABVP) when he was shown black flags and asked to leave by agitating students.

The attack on Majumdar is not an isolated incident. Photographer and filmmaker Ronny Sen claimed he was attacked for his outspoken stance against the BJP’s proposed NRC across the country and the recently passed CAA. While the situation in some parts of the country is tense with incidents of police brutality over the issue, Bengal had seen relatively peaceful days of dissent.