From Ajmer to Indore, recent incidents show that the continuing hate-mongering by right-wing forces is having a direct impact. 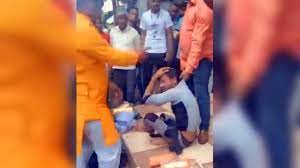 Recent incidents in Indore and Ajmer explain why it is urgent for the world to turn its attention to the state of minorities, especially Muslims, in India. First Indore: a Muslim bangle seller is attacked and beaten up, his belongings and money looted. A video of the assault goes viral. Muslims protest, peacefully and vigorously. The community leaders succeed in forcing the police to register an FIR against the assailants, who are identifiable in the video, and make some arrests.

There is applause for the police. Despite Indore being in Madhya Pradesh, a Bharatiya Janata Party-ruled state, the police has acted in a fair manner, we are told. This is an isolated incident of a misdeed by some miscreants, let the law take its course. What more is it that you want? There will always be malcontents in  society, but if the state machinery works impartially, you need not worry.

Then, the case is turned on its head. The law and order machinery starts working. An FIR is slapped on the bangle seller invoking POCSO, a very serious offence, and seven sections of the Indian Penal Code. The home minister of Madhya Pradesh goes on record accusing the bangle seller of impersonating a Hindu and molesting a girl. He rationalises the attack by calling it an act by the locals who were outraged when they learnt about the girl’s alleged molestation.

But this is a lie, an afterthought. Because in the video you do not hear the attackers saying anything about this. They are only citing his Muslim identity as a cause for their anger. After the incident, though, you needed to find a reason for this violence.

If we thought this was a small incident, something abnormal, then Indian TV channels come forward to dispel doubts about it being an isolated case. They smell a sinister conspiracy against Hindu girls and women. ‘Bangle jihad‘, they declare. In the garb of bangle sellers, Muslims are eying Hindu girls and women. This is part of ‘love jihad’, they conclude.

This theory leaves you dumbstruck. Many of us recall our childhood days. Manihars and Maniharins visiting us regularly; our mothers, sisters and other women thronging to their baskets full of colours of bangles, bindis and what not. There used to be some bargaining.

From your memories of your past, you find this theory of ‘churi jihad’ so absurd that you do not even want to discuss it. You are sorely mistaken. A so-called religious preacher living in the vicinity of Delhi, Yati Narsinghanand, has been telling Hindu men that their women are in danger. Muslims visit their homes in their absence, in the form of electricians, plumbers, vendors ,etc., and befriend their women as part of ‘love jihad’. It sounds like a pornographic fantasy, but the video is viewed by lakhs of people. It is impacting them.

Also read: ‘I Believed in the BJP and I Was Jailed’: How a Muslim Party Member Was ‘Framed’ for Murder

The Indore incident is the most recent example of what this hate campaign can lead to. The hate preacher is giving them an argument to support their violence. Any Muslim in a Hindu locality, in any form, is now a suspect. People feel free to demand their identity proof, record it and then heckle them. Reports of Muslim vegetable sellers being turned away from Hindu localities and attacked were pouring in during the first phase of the pandemic. We read them and forgot, blaming it on the temporary paranoia created by the pandemic. We ignored the attack on the street vendors of Uttam Nagar in Delhi. An isolated incident, we said.

Before Narsinghanand were Zee TV and others like it –  they had listed multiple forms of ‘jihad’ Muslims were waging in India. There was ‘love jihad’, then ‘land jihad’ and then even ‘UPSC jihad’.

We must also remember that in Indore itself, in the month of Diwali, Muslim shopkeepers selling crackers were threatened and warned not to keep crackers with the name of Hindu gods and goddesses in their stores. We also saw a campaign in Muzaffarnagar warning Muslims not to do the business of mehendiwaalas.

So this violence is not spontaneous. There is an active and widespread hate campaign against Muslims, criminalising their very being. Hindus are being instigated. There are organised gangs which have their ‘eyes’ everywhere. That is how a Tasleem selling bangles is ‘caught’ and thrashed, robbed of all his goods and money, humiliated in full public view. And this violence is digitised and spread all over: for sick minds to relish in the plight of the helpless Tasleem and drive fear into Muslims, make them feel powerless.

One of the community leaders (I am withholding his name for his safety) told me how he and others tried to pacify the outraged people by persuading the police to register an FIR. One must note that the police has to be persuaded to do something it should have done on its own. After doing that, it did a ‘balancing’ act by implicating the victim in several crimes. The task of the community leaders shifts now – from ensuring punishment to the goons to somehow saving Tasleem from penal action. To think about bail for him and fighting the case legally. Police would say that there is little they can do now that there is an FIR. It is only for the courts to take a decision on that.

The story does not end here. It is about Tasleem, but it is also about Muslims seeking justice. The same community leader learnt that an FIR has been registered against him and some of his co-workers who were also active in the anti-CAA/NRC protests. This is what will be done to Muslim civil society activists if they seek justice for Muslims. They will be criminalised.

This is from a BJP-ruled state. In Congress-ruled Rajasthan, the story is somewhat different. In Ajmer, a beggar family, Muslim, is attacked, a video made and after lot of noise, the police applies the light Section 151 of the IPC on the goons, which ensures that they are promptly released after being arrested. This is touted as an effective response by the police. But we know the hollowness of this exercise. This is an eyewash. We are told that the police can do this much on its own. For further action, the victims will have to come forward and register a case.

This is the argument used everywhere, from Haryana to Delhi to Indore to Ajmer. Such acts of violence are directed towards individuals, but they are not simple acts of violence. They are hate crimes. The people attacked are not because they are A, B or C but because they are Muslims. This is an attack on the secular principle of cohabitation in India, an attack on the very foundation of India which has a constitution ensuring a dignified life to its Muslims. Such acts should be seen as an attack on the state of India and treated with the gravity they deserve.

The police think otherwise. The political class tries to ignore and minimise the seriousness. The courts do not treat hate speech against Muslims as grave enough to deprive the hate-mongers of their liberty. First, you have to move heavens and earth to get a case registered against them and then the court allows bail to them, as in the case of the Jamia shooter and the Ajmer goons.

I had cried in desperation nearly half a decade ago, in these columns, that Muslims should refuse to get killed. I see with solace that Muslims are refusing to take all this lying down. They are speaking out, recording incidents, marking each act of hate and violence, and demanding accountability from the state and also the media and people. That is how this hate and violence need to be faced. The hate-mongers and anti-Muslim political forces are in power, in many states and in the Union government. But the secular constitution is still here. It can be kept alive only by active acts of secularism.

Having said that, the global community has to tell the Indian government that its actions are being watched and it will be hold accountable according to international norms which all civilised countries have for their attitude towards minorities. The Indian government must be made answerable; it cannot get away simply by denying knowledge and connection to the violent militia on the streets.