'If You Smuggle and Slaughter Cows, You Will Be Killed': BJP MLA Gyan Dev Ahuja

"I will say it straight out, if you smuggle and slaughter cows, then you will be killed. The cow is our mother," the BJP MLA from Alwar said. 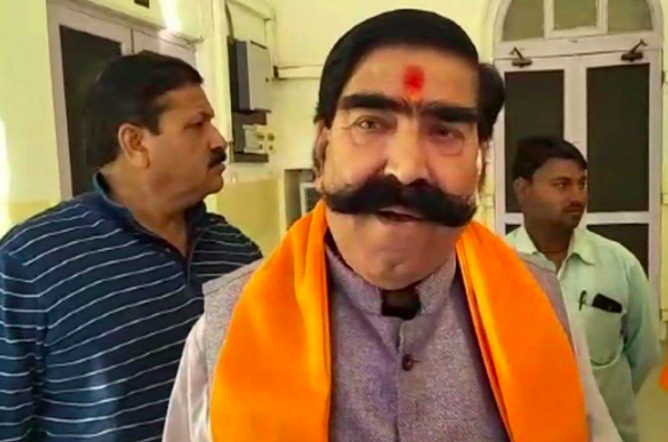 New Delhi: Gyan Dev Ahuja, BJP MLA from Alwar, Rajasthan, has reportedly said that if someone engages in cow smuggling or slaughters a cow, he will be killed.

“Mera toh seedha seedha kehna hai ki gautaskari aur gaukashi karoge to yu hi maroge (I will say it straight out, if you smuggle and slaughter cows, then you will be killed). The cow is our mother,” Indian Express quoted Ahuja as saying.

Ahuja was reacting to a man named Zakir who was allegedly beaten badly by a mob in Alwar district because they thought he was a cow smuggler. Zakir was later arrested on Saturday.

The BJP MLA refuted allegations of mob violence. “As the public was following the truck, it overturned, resulting in the injuries… Now he is saying that villagers beat him up. I have taken details of the case from the SHO. The people didn’t beat him. He was injured because the vehicle overturned,” the newspaper quoted him as saying.

According to IndiaSpend‘s database on cow-related hate crimes, which contains data for the last eight years, the number of such crimes was highest in 2017. Eleven people died in such crimes and of those killed, 86% were Muslim.

This isn’t the first time Ahuja has made headlines because of his controversial statements – including on violent vigilantes claiming to be protecting cows. In April 2015, when dairy farmer and cattle trader Pehlu Khan was lynched to death, Ahuja said he had no regrets. “Kanoon humko haath mein nahi lena chahiye. Lekin uski maut hui. Uske liye humko koi afsosh nahi hai. Aur afsosh karoonga bhi nahi kyunki jo gau taskar hain, gau hatyare hain, aise paapiyon ka yehi harsh hota raha hai, hota rahega (We should not take law into our hands. But we have no regret over his death because those who are cow-smugglers are cow-killers, sinners like them have met this fate earlier and will continue to do so).”

In February 2016, while students and teachers were protesting at Delhi’s Jawaharlal Nehru University over the sedition case brought against certain students, Ahuja announced, “More than 10,000 butts of cigarettes and 4,000 pieces of beedis are found daily in the JNU campus. 50,000 big and small pieces of bones are left by those eating non-vegetarian food. They gorge on meat… these anti-nationals. 2,000 wrappers of chips and namkeen are found, as also 3,000 used condoms – the misdeeds they commit with our sisters and daughters there. And 500 used contraceptive injections are also found.”

The MLA did not then explain how he had known what was in the garbage on the university campus.

In May 2016, he added to this, “Rapes happen daily in JNU. It is hub of criminal activities.”