As Modi Speaks Sufi, His Ministers Are Whirling to a Different Tune

"Of the 99 names of Allah, none stand for force and violence," said Modi. Of the 66 names in his cabinet, however, at least one does: Ram Shankar Katheria, and the PM is doing nothing about it. 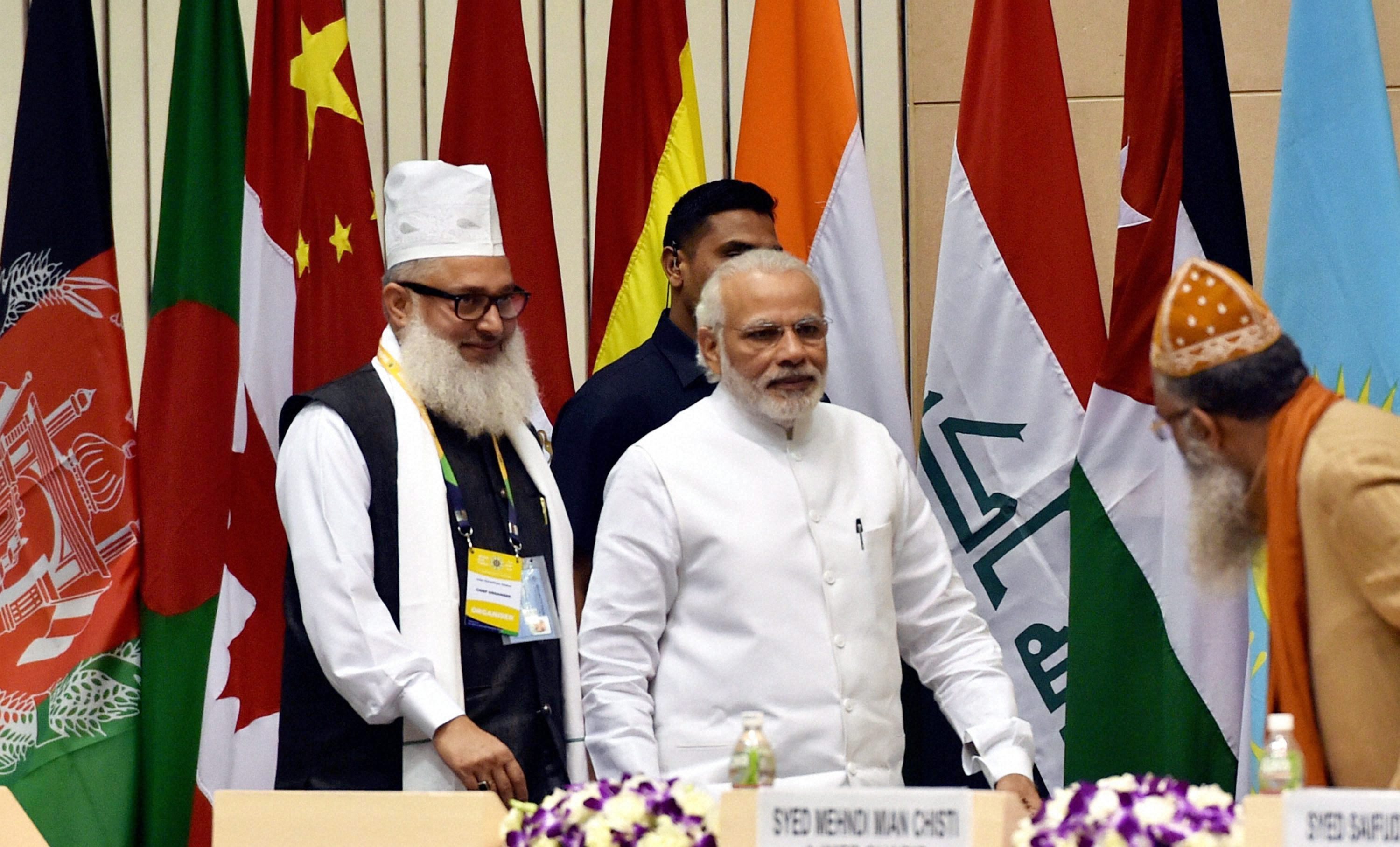 If Prime Minister Narendra Modi’s panegyric to Islam and Indian Muslims on March 17 was meant to herald his government’s commitment to “an inclusive and peaceful society”, his own ministers do not appear to have got the memo.

“Of the 99 names of Allah, none stand for force and violence,” said Modi. Of the 66 names in his cabinet, however, at least one does: Ram Shankar Katheria.

Addressing a rally in Agra a day after Modi’s speech to the World Sufi Forum, Katheria – who narrowly escaped being indicted for hate speech last month – demanded that charges against local Bharatiya Janata Party and Vishwa Hindu Parishad leaders for using inflammatory language against Muslims be dropped.

If the state government – which is run by the Samajwadi Party – does not drop the charges in 15 days, he warned, Agra would see “a different kind of Holi”.

Katheria is MP for Agra. As Union minster of state for human resource development, he is partly in charge of running the country’s education system.

The Sangh parivar leaders charged with inciting hatred against Muslims are Kundanika Sharma of the BJP, Ashok Lavania of the VHP and Shashank Chaudhary of the BJP’s student wing, the ABVP. Though the three are officially “absconding”, the presence of the first two on the stage with Katheria suggests the SP government in Uttar Pradesh is either not serious about pursuing the case or has already given in to Katheria’s thinly veiled threats of a violent Holi.

Katheria was present at the same February 28 meeting where speakers – including Sharma, Lavania and Chaudhary – used abusive and threatening language against the Muslims, whom they blamed for the murder of a local VHP activist, Arun Mahaur. Though newspapers reported that Katheria too had made incendiary comments, the minister said he had only asked for the death penalty for the killers of Mahaur. However, his own explanation – “I had also said that the Hindu community should unite for their safety” – suggests the politician sees himself as a representative of “the Hindu community” and not of the people of Agra as a whole, including its Muslim residents. No ‘sabka saath‘ for him, no sir.

According to the Indian Express, the February 28 meeting warned Muslims of “a final battle”:

Speaker after speaker urged Hindus to “corner Muslims and destroy the demons (rakshas)”, while declaring that “all preparations” had been made to effect “badla (revenge)” before the 13th-day death rituals for Mahaur. “Human skulls would be offered to his martyrdom,” VHP district secretary Ashok Lavania, who has been jailed earlier for assaults on Muslims, said.

MP Babu Lal urged an open fight with Muslims, and said: “Don’t try to test us… We will not tolerate insults to the community. We do not want unrest at any cost, but if you want to test Hindus, then let’s decide a date and take on Muslims.”

Local BJP leader Kundanika Sharma called other parties “jackals” for seeking votes of “traitors”. “But we want the heads of these traitors, the killers of Arun Mahaur,” she said. “This is not the time to sit quiet. Chhapa maaro, burqa pehno, lekin inhen gher-gher kar le aao. Ek sar ke badle dus sar kaat lo (Raid them, wear burqas, but corner them. Behead ten heads for one head).”

VHP district secretary Ashok Lavania said, “The sacrifice of my brother will not go in vain. Our youths will take revenge… Agar hum Hindu naujwan apni maa se paida hue hain, eent ka jawab patthar se, khoon ka jawab khoon se denge (If we Hindus are born of our mother’s womb, we will reply in kind, with blood). The revenge of the killing of one brother demands killing of ten rakshas… We are fully preparared. If they retaliate, then it will be a mahasangram, Mahabharata. The final battle.” “During Kali worship, narmund (human skulls) are offered after beheading demons. Before his terhavin, the Hindu community will perform a similar act and offer these narmunds. I am confident,” Lavania said.

After there was a national uproar over these shocking statements and questions were raised in parliament, the Agra police, which had gathered evidence of these hate speeches but not moved against any of the speakers, filed a case against three leaders. However, it made no move to arrest any of them.

As for Katheria, Union home minister Rajnath Singh said that he did not believe the minister had said anything wrong.

“The government is opposed to all statements/speeches which divide the country on the basis of religion, caste and creed,” he told the Rajya Sabha. Though he did not say so explicitly, it is clear that the home minister does not believe calling for one community, the Hindus, to unite to defend itself (against another) – a statement Katheria himself admitted making – is tantamount to dividing the country on the basis of religion. MPs and ministers take an oath to uphold the constitution and represent all citizens. In a communally charged situation, a minister should be calling on all citizens to unite and defend the peace rather than urging one community – in this case, his own – to unite. You don’t need a degree in civics to understand that. Yet the home minister saw nothing wrong.

Government officers had vetted a recording of his remarks, said Rajnath. “No objectionable contents against any particular community have been noticed in [his] speech.”

Well, emboldened by the indulgence of his senior party leaders, Katheria has now taken Rajnath Singh’s argument one step further. Not only had he not said anything objectionable, but none of the Sangh parivar leaders who spoke at the Agra meeting on February 28 had done so either. That is why he wants the state government to drop the hate speech charges.

Rajnath Singh should now tell us whether it acceptable or objectionable for a Union minister to issue ultimatums in defence of individuals accused of making highly inflammatory speeches. Or perhaps his sleuths have already informed him that those individuals have also not said anything objectionable.

India needs social values, constitutional provisions and legal safeguards to build an “inclusive and peaceful society, in which everyone belongs, secure about his rights and confident of her future,” Modi had told the World Sufi Forum.

Perhaps he will tell us in a future speech where hate speech fits in and why he has such inclusive and peaceful people like Katheria in his council of ministers.