Media One TV and Asianet News were accused of 'siding with a particular community.' 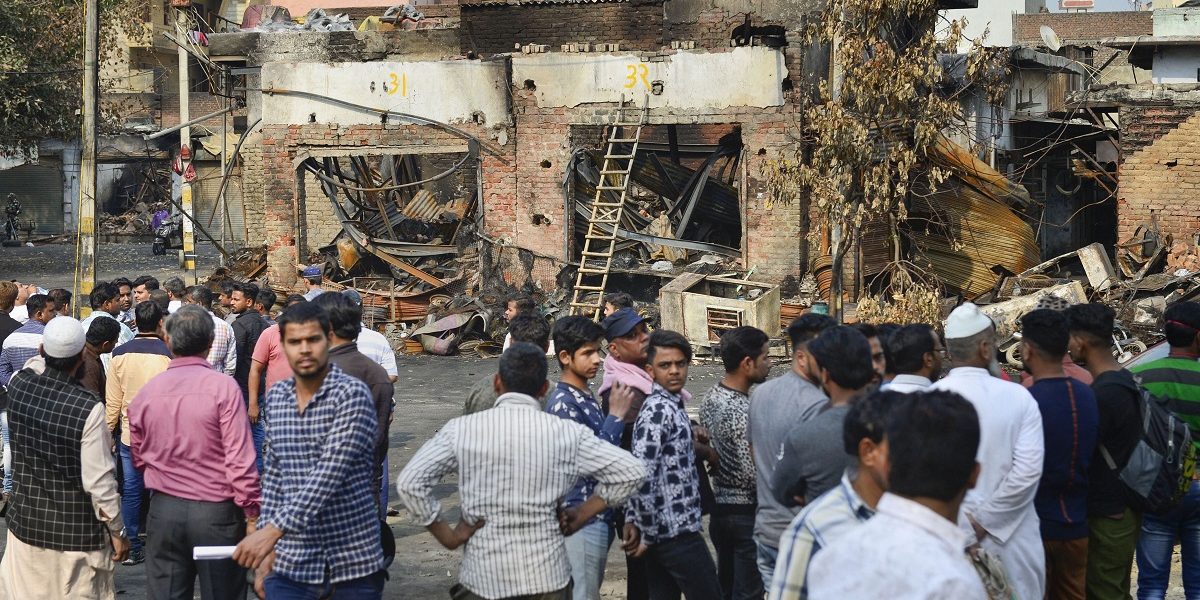 New Delhi: Hours after the Ministry of Information and Broadcasting banned Malayalam channels Asianet News and Media One TV from broadcasting for 48 hours over their coverage of the Delhi riots, which the government said “highlighted the attack on places of worship and siding (partial) towards a particular community”, the two channels were back on air.

Asianet was back on air by 1.30 am and MediaOne at 9.30 am. The News Minute reported a source as saying that the board of Asianet had made a representation to the I&B ministry on Friday night.

Media One, the website said, had not approached the ministry and instead were notified in the morning that transmission was being resumed.

The News Minute had noted in its initial report that both these channels have thus displayed black screens since 7.30 pm on March 6.

Incidentally, as The Wire‘s Sukanya Shantha had noted in her ground report from Mangaluru following police brutality on anti-CAA protesters in late December, these are the very two channels whose journalists had been singled out and questioned for covering the protests in Karnataka too.

The orders for both the channels, while similarly worded, highlights what their respective reporters did to particularly incur the ban.

These include alleging that the Delhi Police was delayed in its response, noting that violence was being allowed to continue, focusing on the firing and violence on anti-Citizenship Amendment Act supporters, and coverage of especially communally targeted violence in areas of north east Delhi.

To both channels, the Ministry wrote:

“…it appeared that telecast of reports on North-East Delhi violence had been shown in a manner which highlighted the attack on places of worship and siding towards a particular community (sic).”

It is noteworthy that places of worship belonging to a particular community – Muslims – were indeed attacked in the Delhi riots, as many channels and media outlets have reported.

To Media One, the I&B Ministry further wrote:

“Channel’s reporting on Delhi violence seems to be biased as it is deliberately focusing on the vandalism of CAA supporters. It also questions RSS and alleges Delhi Police inaction. Channel seems to be critical towards Delhi Police and RSS (sic).”

The alleged negligence of the Delhi Police in containing violence has been a matter of deep discussion since the riots. There is also video evidence of personnel engaging with rioters in throwing stones.

The notification singled out Media One TV’s Delhi correspondent Hassanul Banna’s phone-in bulletin which allegedly said the following according to the Ministry:

Police refused to visit the spot and nab the vandals. According to anti-CAA protesters, police were present there the previous day during the Bharat Bandh called by Bhim Army Chief Chandra Shekar Aazad.

The channel alleged that Delhi Police remained inactive during violence, vandalised the shops and fruit carts and set them
ablaze. The channel also reported that violence took place mostly in Muslim dominated area of Chand Bagh, Delhi. While telecasting the news, the channel carried the news of stone pelting, arson and injured people being taken to hospital.”

As for Asianet, the Ministry had the following to say about correspondent P.R. Soni’s ground reportage:

“…reported that riots continued in Delhi and death toll has reached 10. Armed rioters were attacking people after asking their
religion. Hundreds of shops, houses and vehicles were set on fire and 160 people were injured in the riots. The rioters took over the streets as the Police remained mute spectator.

…Delhi Police were mute spectators when rioters set ablaze mosques at Jaffrabad and Maujpur. Fire tenders reached after two hours to put the fire of the mosque. Rioters blocked the commuters and attacked them after questioning their religion. Houses of Muslims were attacked at Hindu majority areas and Muslims retaliated.

Rioters were firing at each other in the streets.

Hundreds of shops, houses and vehicles were burnt down. A Petrol pump was set on fire. As the violence continued for the third day, no action was taken to contain the violence. The Central Government did not act to control the riots.

Central forces reached the riot hit areas after long hours of the meeting of Union Minister Amit Shah. Delhi witnesses such a large riot after 1984 anti-Sikh riots. The violence continued and the fire on many vehicles has not been doused.”

The ministry has cited clauses of the Cable Television Networks Rules, 1994 behind its action which deal with encouragement of communal violence.

No action has yet been taken against BJP leaders Kapil Mishra, Anurag Thakur, Parvesh Verma and Abhay Verma, whose public exhortations are believed to have fanned insecurities and encouraged communal violence.

In response, Media One released a statement calling the ban “unfortunate and condemnable”.

“This is nothing but an order to stop free and fair journalism. MediaOne will fight legally against this unprecedented and undemocratic action imposed by the Information and Broadcasting Ministry,” it reads. 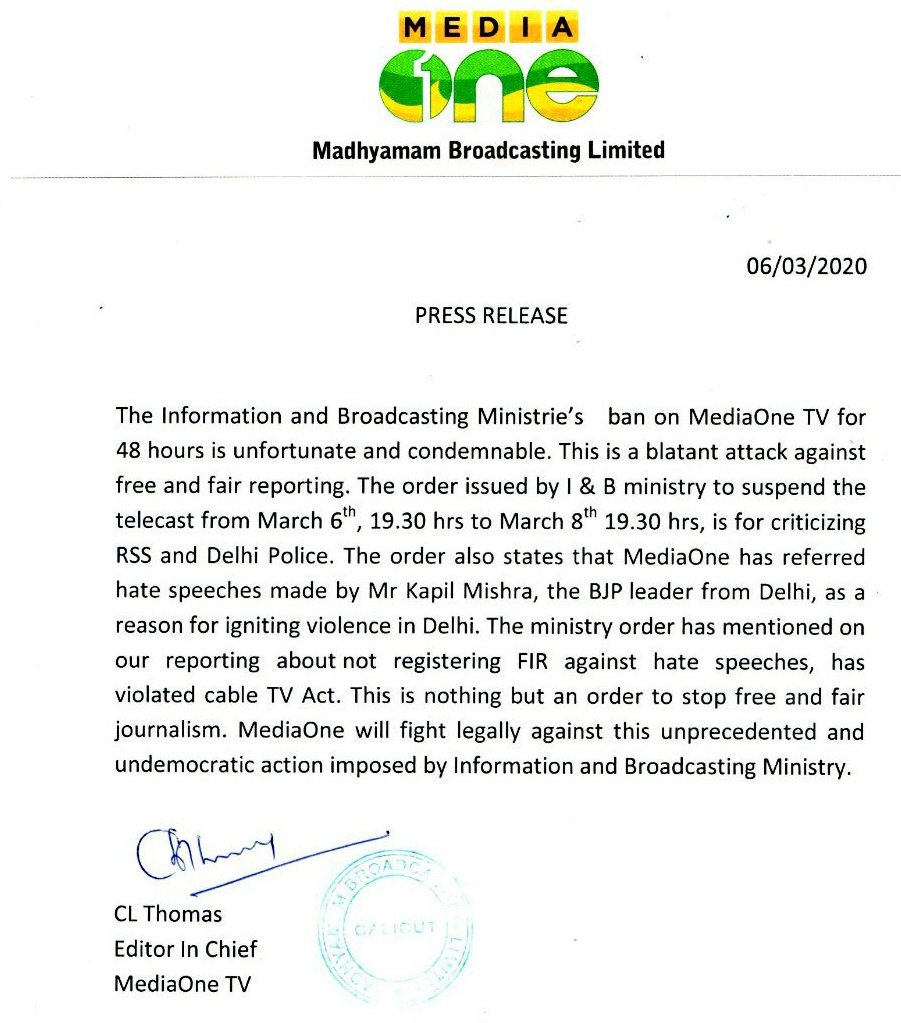 Statement released by Media One.

The Kerala Union of Working Journalists (KUWJ) had also called for a protest against the 48-hour ban on Asianet and Media One at Jantar Mantar in New Delhi.