Experts say most of the incendiary tweets, rumours and lies came from India, showing the power of unchecked social media to spread disinformation and stir unrest a full continent away. 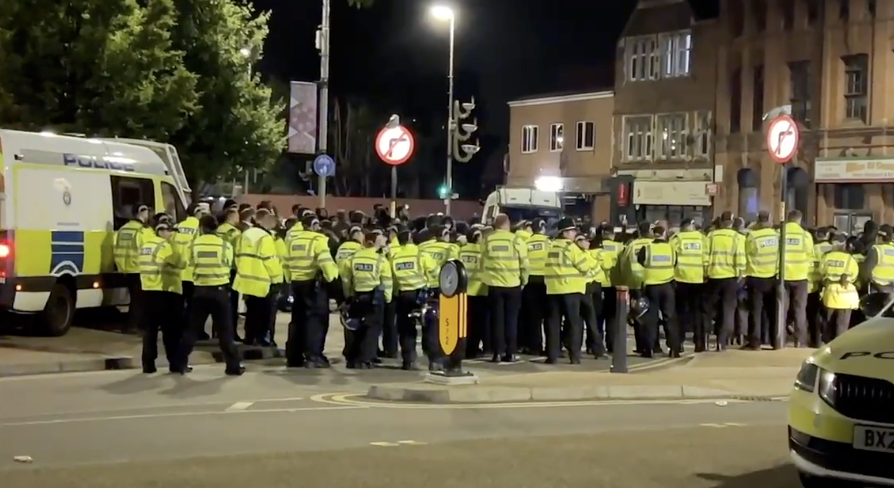 Rumour had it that a Muslim girl had been kidnapped and a Hindu temple had sent masked thugs into combat. Add in local fury over an India-Pakistan cricket match, and Hindu and Muslim men were soon fighting on the streets of central England.

It was a social media storm – mostly cooked up a continent away – that materialised in real life in Leicester, where police made almost 50 arrests and a community was left in tatters.

“It is a powerful illustration of how hashtag dynamics on Twitter can use dubious inflammatory claims to … escalate tensions on the ground,” said a spokesperson at fact-checking site Logically, which analysed the posts’ veracity.

Experts say most of the incendiary tweets, rumours and lies came from India, showing the power of unchecked social media to spread disinformation and stir unrest a full continent away.

“I’ve seen quite a selection of the social media stuff which is very, very, very distorting now and some of it just completely lying about what had been happening between different communities,” Peter Soulsby, Leicester’s mayor, told BBC radio.

Also read: Communal Virus Injected into Diaspora, and the Culture is Growing

To counter some of these claims, police took to social media themselves, saying they had fully investigated reports of three men approaching a teenage girl in an attempted kidnap, and found no truth whatsoever to the online story.

“We urge you to only share information on social media you know to be true,” they said.

Fact-checkers also found no truth to claims that gangs of masked thugs were bussed into Leicester.

Many of the misleading posts alleging that Hindus and Hindu sites were being attacked came from India, analysis showed.

Some 80% of tweets with geographic coordinates, or geo-tagged information, were connected to India, Logically said.

“The ratio of tweets geo-tagged to the UK versus those geo-tagged to India was remarkably high for what, ostensibly, was a domestic incident,” a spokesperson told the Thomson Reuters Foundation.

“The involvement of high-profile figures in India setting the discourse was a key element.”

BBC Monitoring said that more than half of the 200,000 tweets it investigated came from accounts geo-tagged to India, with hashtags such as #Leicester, #HindusUnderAttack and #HindusUnderattackinUK.

The fact-checks confirmed what several Leicester residents had suspected for years: online disinformation and abuse aimed at religious minorities came increasingly from users in India, and platforms were doing little or nothing to check it.

“The events in Leicester did not happen out of the blue,” said Keval Bharadia at the South Asia Solidarity Group, a British community non-profit.

“Friends and family have been sending fake news and misinformation for years. It is a never-ending stream of propaganda from troll armies,” he said.

A spokesman for India’s ministry of home affairs did not respond to a request for comment.

The Indian High Commission in London, in a statement, said it “strongly” condemned the violence against the Indian community in Leicester, and the vandalism of “premises and symbols of Hindu religion.”

The BJP swept into power in India in 2014 and won by an even bigger margin in 2019, its victories in part credited to its savvy tech cell and social-media prowess, fuelled by thousands of supporters it calls digital ‘yodhas‘ or warriors.

“Hindu nationalism is one of the largest disinformation networks in the global South Asian diaspora, with bigoted and often terrifying attacks against caste and religious minorities,” said Thenmozhi Soundararajan of Equality Labs.

“Just think about the horrific hashtags that are now normal,” said Soundararajan, citing “presstitute” – a derogatory term for journalists – and “lovejihad”, an Islamophobic conspiracy theory popular in India.

“Narratives spread on WhatsApp have led to offline violence,” she added.

While expatriates have long absorbed content from India, and commented on events, disinformation has mushroomed with the rise of social media platforms, said Pratik Sinha, co-founder of Indian fact checking site AltNews.

“We are so polarised now, and this is particularly true of non-resident Indians who can’t check the reality on the ground,” he said.

Much of the noise emanates from Meta, formerly Facebook, which in 2019 commissioned an independent assessment of its role in spreading hate speech and incitement to violence on its platforms in India, following criticism by civil society groups.

But Meta has since said it would not release the full report, only saying that it had “significantly increased” its content moderation workforce and language support for India.

Twitter – which has about 24 million users in India – has asked an Indian court to overturn some government orders to remove posts which Delhi said spread misinformation.

Last month, in a rare rebuke, India’s Supreme Court said television was the “chief medium of hate speech” and asked why the government was “standing by as a mute witness”.

The government has not responded to the charge.

Meanwhile, hate speech and disinformation on social media platforms goes largely unchecked in one of their largest markets, said Sinha.

“Misinformation leads to radicalisation, no matter where you are,” he said. “We are already seeing the consequences on the ground.”

This article was originally published by Context, powered by the Thompson Reuters Foundation.