A YouTube channel called 'Aayudh' uploaded an “exposé” video insinuating that eight students who worship Hindu gods were made to partake in a sacrament, a Christian religious ritual, in the school. 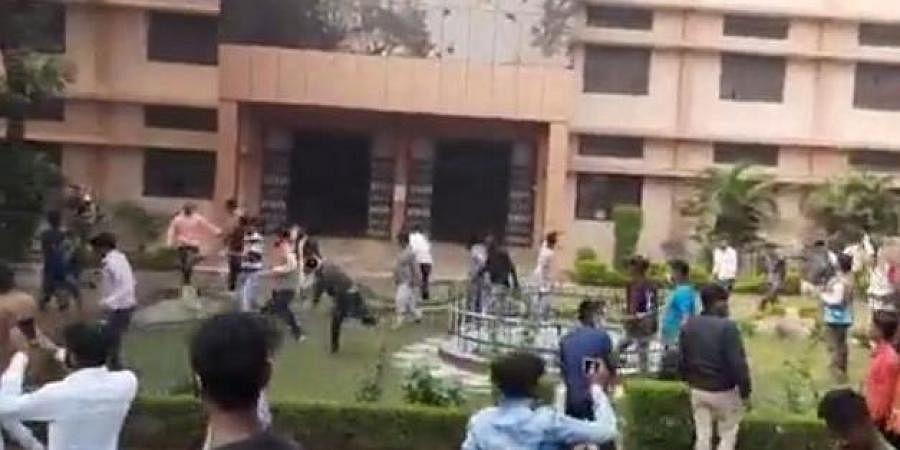 Stones being pelted at the school.

The HT report also said that the Hindu groups were inspired by a YouTube video that alleged that eight Hindu children were converted to Christianity in the school premises.

Reporting on the same incident, The Indian Express wrote, “The incident occurred at around 12:10 pm, when around 300 people gathered outside St Joseph High School to protest — while the school was conducting exams for Class 12 students. The mob soon turned violent and broke into the school premises, damaging property. School principal Brother Anthony Tynumkal told The Indian Express that the mob was armed with iron rods and stones, and chanted ‘Jai Shri Ram’ while damaging school property.”

The very real consequences of disinformation

The YouTube channel in question goes by the name “Aayudh”. It uploaded an “exposé” video insinuating that eight students who worship Hindu gods were made to partake in a sacrament, a Christian religious ritual. The channel implied “forced religious conversion”. This video was presented by Sourabh Kumar. He alleged a religious conspiracy for mass conversions in the school.

At the 1:39 mark, a clipping of a publication titled “Sagar Voice” is displayed. The headline of one of the articles in the publication reads “First Holy Communion at Ganj Basoda”. The article carries a photo of a group, including the eight children, dressed in white. It says that the priest of Ganj Basoda, Parish Fr Jose Lee Cyrakkove, was present during the sacrament.

Alt News spoke with Fr Jose Lee. “Sagar Voice is a publication that shares updates related to Church-related activities in MP’s Sagar diocese. As mentioned in the article, eight children participated in Holy Communion and it took place at St Joseph Church Ganj Basoda in Vidisha district of MP on October 31. Holy Communion is a sacrament that is given only to Christians and takes place in the presence of the children’s parents. It’s worth noting that none of the children who participated in the sacrament attend the school that was vandalised. While I’m still trying to understand why the violence took place, I hope the authorities will take cognisance of the incident.” 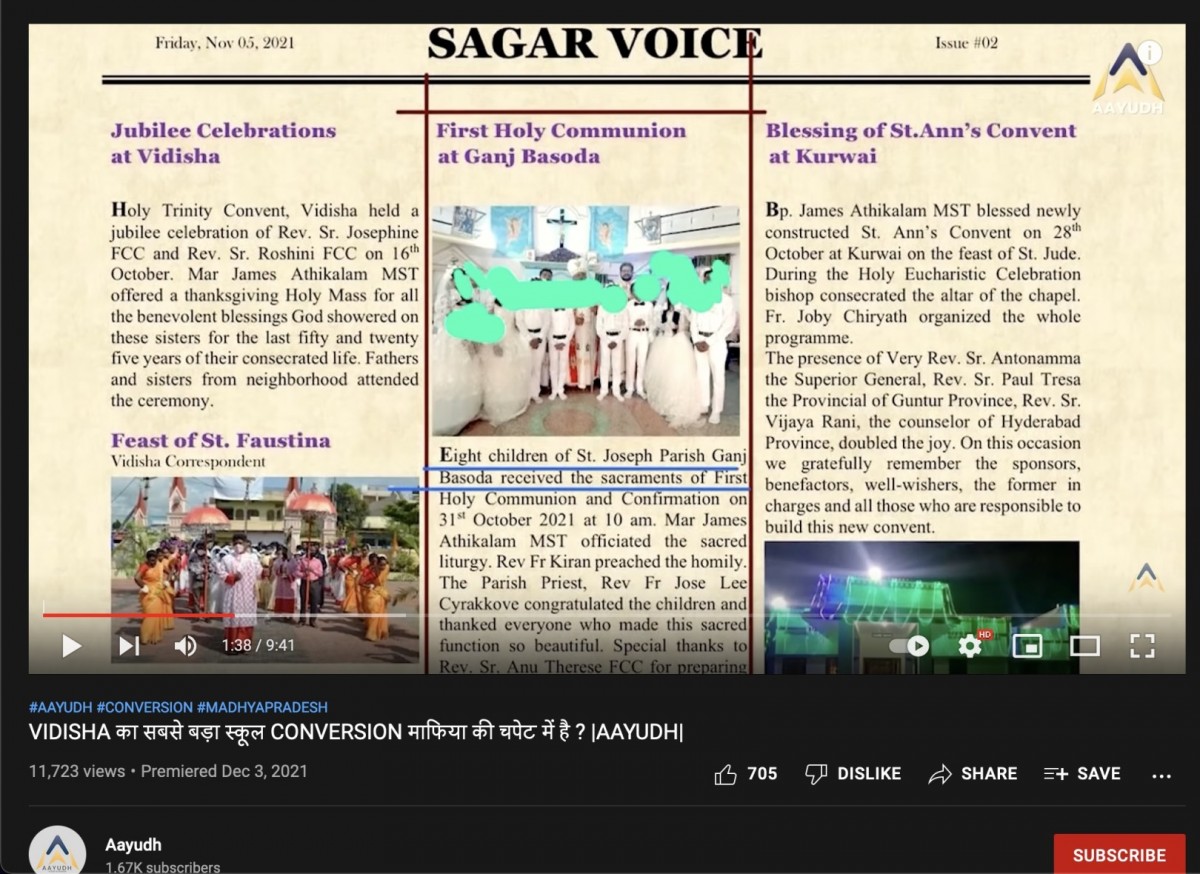 The video ends with an excerpt from a Hindi poem titled “Power and Forgiveness”, by the renowned Hindi-language poet Ramdhari Singh Dinkar. Its English translation can be read here. The poem was recited to advise Hindus to “not tolerate atrocities”.

On December 4, a day after the YouTube video was uploaded, Ganj Basoda-based right-wing outfit Ahirwar Samaj wrote a letter to the Vidisha district collector, informing him of the alleged conversions. The letter also claims that eight Hindu children were converted to Christianity in St Joseph Senior Higher Secondary.

The letter threatens that “violent protests” will be carried out by Hindu groups if FIR is not filed against the “accused” and strict action is not taken within seven days. 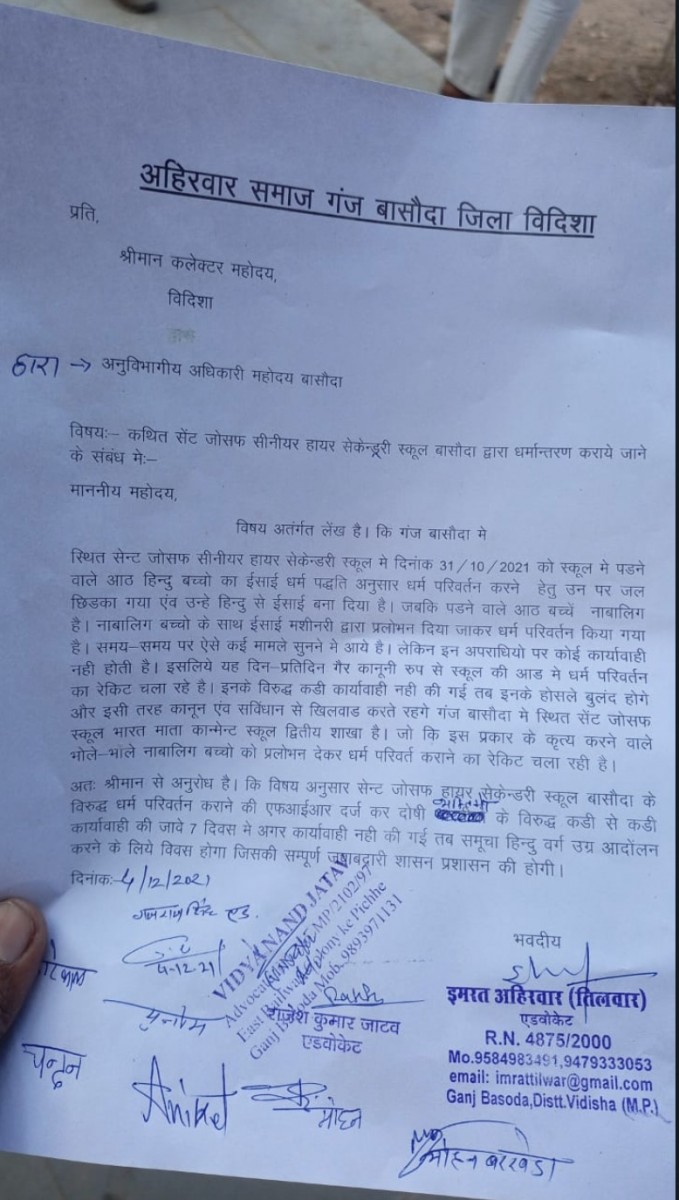 YouTube’s policy on hate speech does not allow targeting individuals or groups based on a plethora of identities, including religion. While Aayudh’s video does not use racial slurs, abuse or openly incite violence, context matters. And YouTube also believes so.

“Consider the intention of your video — is it to inform and educate or to shock and incite?” is a question on the “do’s and don’ts” on the “importance of context” page of YouTube guidelines. Under “what you shouldn’t do”, YouTube says that content creators should not try to “shock or disgust” their viewers.

Since no social media platform has a policy against disinformation, one can only analyse disinformation shared with the intent to spread hate or fan hate/ violence from the lens of the platforms’ existing policies.

There was no purpose of the video other than targeting the minority Christian community in India using disinformation.

On December 6, the day the violence took place, Aayudh uploaded a “ground report” where its reporter took credit for the channel’s reportage on the alleged conversions that led the Hindu community to take to the streets. In another video uploaded the next day, the channel again accused the school of running an “illegal conversion racket”.

Several other right-wing channels have also amplified the false “conversion narrative”, including Sudarshan News. The disinformation led to violence when Class XII students were giving a mathematics exam and barely escaped the attack. “Ek dhakka aur do, St Joseph tod do” (Give it another push, bring down the Babri mosque) was one of the slogans raised during the attack. This was also a signature tune used to egg the mob in the run-up to the demolition of the Babri Masjid.

Alt News has emailed YouTube about Aayudh and if the channel will be suspended. This article will be updated with YouTube’s response.