It is not difficult to see that Muslim-ness is being criminalised and outlawed using the arguments of uniformity, a national way of life, public order, secularism and the like. 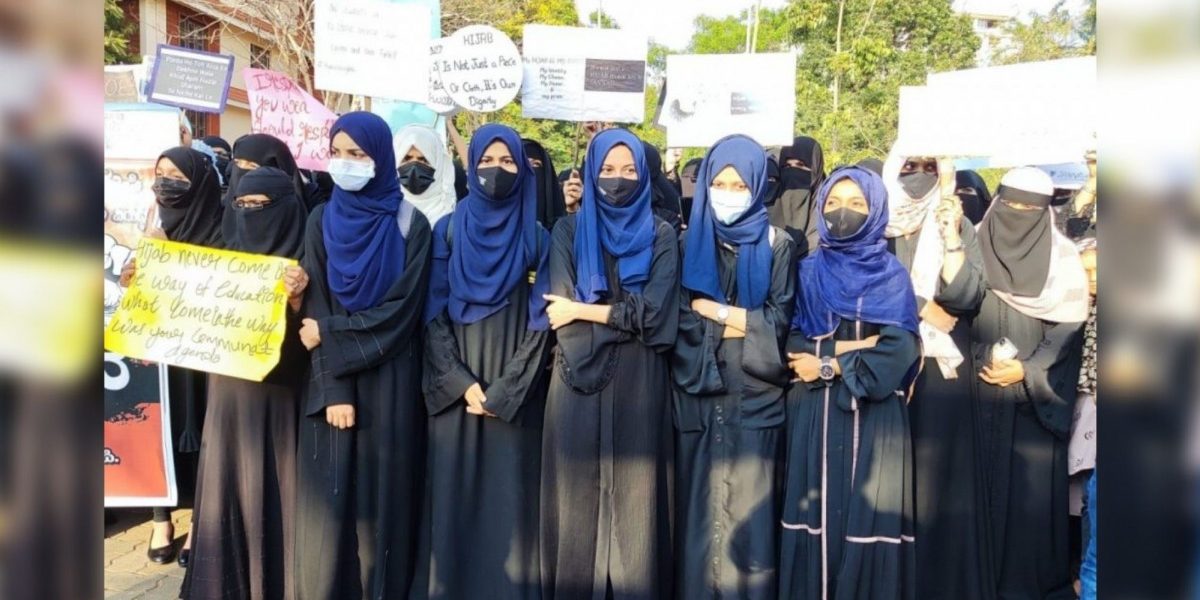 Students of the Government Pre University Girls College in Udupi, who first raised the issue of discrimination for wearing headscarf at colleges, during the Muslim women’s pro-hijab protest in Udupi, on February 07, 2022. Photo: Special arrangement.

These are the words of the chief minister of Karnataka. According to reports, the Karnataka high court yesterday appealed to the student community and the public at large to maintain peace and tranquillity while the hearing in the hijab case is going on.

Who is creating disharmony? Who is disrupting order? Why is the violence being called a ‘hijab-saffron’ tussle, even by some well-meaning politicians and intellectuals? Why are people lamenting that in the hijab-saffron controversy, the students of “both sides” are losing?

We should be very clear about what is going on; this is neither a ‘hijab row’ nor a ‘hijab-saffron tussle’ and it not, as again some people want us to believe, ‘competitive communalism’.

A senior journalist was aghast to see a lone young woman responding with ‘Allahu Akbar’ to a horde of saffron-scarf-donning lumpens who were chasing her, shouting ‘Jai Sri Ram’. He wondered if this was an attempt to polarise the electorate in faraway Uttar Pradesh and other states where elections are due. Why did she have to invoke ‘Allahu Akbar’?

Thus, the Muslim woman who is being attacked becomes an active party to the design of polarising voters. But the journalist and others must understand that this woman – her name is Muskan – did not choose this date or this month or this season to invite an attack on her personhood by wearing a burqa, which is part of her attire.

Neither had the young Muslim students of the college in Udupi decided to start a ‘polarisation game’ when they were stopped from entering their classes for wearing hijabs; when the authorities of the college suddenly decided that the hijab violated the institutional policy about the uniform students should wear.

It needs to be understood that these students were not wearing hijabs as a mark of protest to begin with. Neither were the women in the college at Kundapura or those in other parts of Karnataka wearing hijabs trying to prove anything. Based on how they have interpreted or internalised their religion, they see it as part of their attire.

India’s non-Muslims (or Hindus, to be specific) are quite used to the sight of hijab or burqa-wearing women. They may have their opinion about this practice but never has it interfered with anything they – i.e. the non-Muslim public – do or want to do. Never has it disturbed public order. Some people may find it orthodox, some backward, some regressive and oppressive but that concerns the woman who is wearing it, not anybody else.

Why did the college authorities, then, find the hijab offensive? They tried to hide behind some government order. But it was not in existence when they decided to stop the hijab-wearing students from accessing the classroom. The women at one of the institutions even presented the rule book to show that it did have provision requiring a head scarf to match the colour of the uniform. But it was never only about that.

The women from the Udupi college are on record complaining that it was not only the hijab that irked some of their teachers; they were also reprimanded for speaking in Urdu or using salaam as a form of greeting. All ‘Muslim’ markers were seen as objectionable or not commensurate with the uniform culture of the college.

The government issued the order regarding uniforms in educational institutions much after the stand-off between the students and college authorities began; it was an afterthought meant to give a ‘legal’ cover to the attempt to bar hijabs from campus. Regrettable and unnecessary though this official intervention was, it was still a matter between the Muslim women students and the authorities.

However, we suddenly saw Hindu students with saffron scarves or gamchhas appearing on the scene in a threatening manner. The Muslim women in hijab had not opposed anything Hindu. But these Hindu boys were certainly opposing the women’s ‘Muslim-ness’. Their saffron scarf tried to compete with the hijab in a way that is laughable, sad and macabre.

It is also evident that the decision of Hindu boys and girls to start wearing saffron scarves and later, headgear, to show their unhappiness or unease with hijabs was not a spontaneous reaction. Videos have emerged in which vans carrying and distributing saffron stoles and headgear are seen and where Hindu boys are seen depositing them after their ‘protest’.

We need to be clear that there is a difference between a protest and an attack. What the saffronised Hindu youths are doing is an attack; it is violence. It is they who are disrupting peace and public order.

There is certainly some organisation behind these well-orchestrated attacks. It is this link that needs to be investigated. This wouldn’t be too difficult to do either. Instead, the state home minister is reported to have instructed his agencies to probe the six hijab-wearing students for links with some organisation which might have instigated them to dress as they did.

We know this method. After the violence against Dalits at Bhima Koregaon, instead of probing the people behind the violence, the state initiated an investigation into the hosts of the event, alleging a nefarious design behind the Bhima Koregaon event itself. The victims themselves were criminalised.

Similarly, after the violence against the anti-CAA protestors in Delhi, instead of finding the people behind it, the state claimed that the protests themselves were a conspiracy which led to violence.

Before that, we saw Mohammad Akhlaq being dragged out from his home and lynched. Yet, a case for keeping beef was lodged against him and it is the same with scores of those killed or attacked by the so-called ‘cow protectors’. In each of these incidents, those killed or attacked faced criminal charges. We should not be surprised if the state decides to prosecute these Muslim women too.

The state is invoking the principle of equality to deny the wearing of the hijab. But how does the hijab make the classroom unequal? How and why should those not wearing a hijab feel unequal and discriminated against?  Do Hindus feel that wearing a hijab is an extra privilege which they cannot enjoy and, therefore, it fills them with a sense of inferiority?

It is not difficult to see that Muslim-ness is being criminalised and outlawed using the arguments of uniformity, a national way of life, public order, secularism and the like.

Since Hindus are in the majority, their way of life, their practices become dominant, national and universal, be it vegetarianism, treating India as their ‘mother’, or celebrating Diwali or Holi.

Moreover, others are asked to participate in these ‘national’ events. You can have a tableaux from the education ministry get the top prize in the Republic Day parade which depicted Hindu rishis, a Hindu male in a saffron kurta with a tripunda on his forehead, sporting a flowing Shikha, evidently a Brahmin leading the flock and this it must be accepted as ‘Indian’ and ‘national’.

But anything with a Muslim or Christian (and sometimes even Sikh) marker is seen as sectarian. ‘Why do they insist on looking different, living in their own way? Why don’t they follow what we prescribe for them?’ is the complaint.

The young Muslim women of Karnataka insist that Indian secularism allows them to be what they are rather than turn into a copy of Hindus. Muslims are not vassals, and Hindus need to learn to live with different ways of life; with diverse religiosities.

It is not that Hindus did not know how to do this already, but the RSS, BJP and their affiliates are deliberately injecting into their belief system an amnesia about the not-so-distant past.

The incidents of Karnataka have also made the difference between religion and communalism very stark. The saffronised mob shouting Jai Shri Ram as a threat was communal; the lone burqa-clad woman with the cry of Allahu Akbar in defiance was religious. There could not have been a better example of how the two differ.