For Hindus to Defend Criminals Just Because They Are Hindu is unHindu. And Plain Wrong.

For the sake of our democracy, our religion and culture, and the legacy we are bequeathing to the coming generations, Hindus must open their eyes to the truth, and speak the truth, without fear. 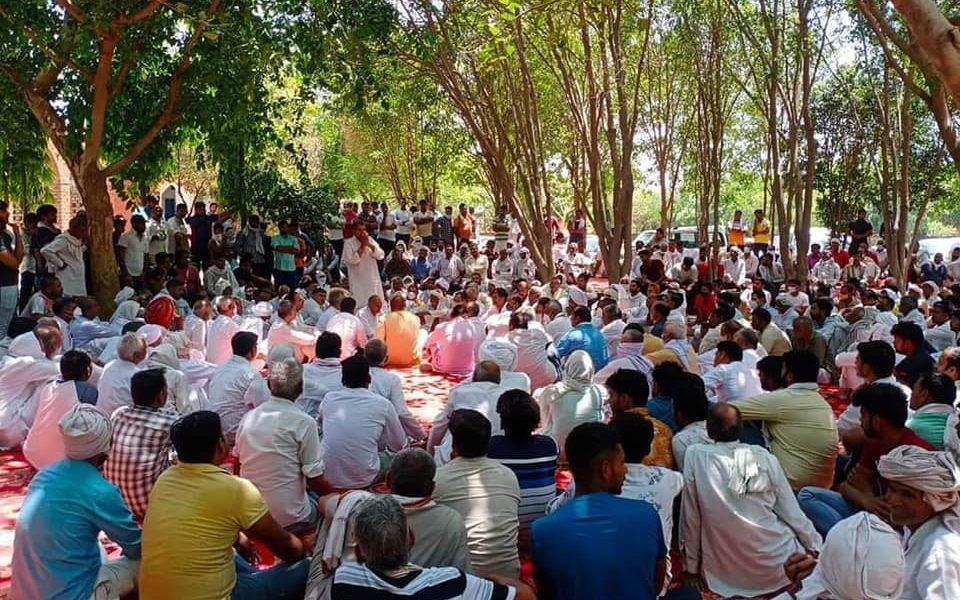 The Badoli mahapanchayat in support of accused in the Asif Khan lynching case. Photo: Facebook/Sunil

One of the core principles of Hinduism is ahimsa, or non-harm. And yet we are perturbed by a trend in our Hindu communities – that when Hindus perpetrate violence, especially against non-Hindus, other Hindus feel compelled to rush to their defence.

Three years ago in Kathua, Jammu, an eight-year-old Muslim girl from a nomadic tribe was repeatedly gang-raped over a period of ten days inside a Hindu temple and then strangled to death. One of the alleged perpetrators was a Hindu priest.

We were heartened to see Indians across the country and even the world express outrage and heartbreak. But we were appalled that in the immediate aftermath of this atrocity, thousands of Hindus, including BJP ministers, rallied under the banner of Hindu Ekta Manch (Hindu Solidarity Forum), not to protest the rape and murder but to defend the alleged murderer-rapists.

In the past month, Asif Khan was attacked and killed by a mob in Haryana when he was out to buy medicine with his cousins. Even though the second wave of COVID-19 was raging, 50,000-strong “mahapanchayats” were organised in Haryana, not to condemn this atrocity but to defend the alleged murderers.

This tendency has spread beyond India’s borders. In Australia, a young man called Vishal Jood has been arrested for allegedly attacking a Sikh man with baseball bats, sticks and rods, accusing him of being anti-Indian and Khalistani. Jood’s case is up for hearing on July 1 in the Parramatta District Court in Sydney.

This is a matter for the Australian courts, but it is astounding that there have been rallies in his support in Australia and in Jood’s home state of Haryana.

Even more astonishing is that BJP ministers have shown up to support Jood. BJP’s Kapil Mishra and Tejinder Pal Singh Bagga tweeted in Jood’s support, and the chief minister of Haryana has asked India’s external affairs minister to intervene to secure his release.

If a Hindu commits a rape or murder, or some other atrocity, especially against a non-Hindu, is it now imperative that we support them [in most cases him] to prove our patriotism to India and our loyalty to the Hindu community?

If we denounce the rape and murder of the eight-year-old girl, the lynching of Asif Khan, and the violence towards a Sikh Australian, does that make us anti-Indian and anti-Hindu?

And if we do not denounce the rape of a child and the lynching of young men, what does this make us?

The best way to defend India and Hinduism is to maintain our moral and spiritual compass. Rape and murder cannot, must not, be defended.

It is our duty as citizens, as ethical humans and as Hindus, to speak up. Lord Krishna in the Bhagavad Gita tells Arjuna,

karmaṇyakarma yaḥ paśhyed akarmaṇi cha karma yaḥ
(Those who see action in inaction and inaction in action are truly wise amongst humans).

Those Hindus who see fit to rally to defend rapists and murderers as a way to prove that they are true Hindus and true Indians may be beyond our reach. But, just as Lord Krishna advised Arjuna that inaction does not mean neutrality, Hindus who remain silent in the face of rape and murder by their fellow Hindus must understand that by being silent, they are becoming complicit in those crimes.

In the face of German Nazism, Albert Einstein said, “If I were to remain silent, I’d be guilty of complicity.” We must speak for the heart of India and for the heart of Hinduism and denounce the violence and hatred of Hindutva.

Our religion and our ethical compass also teach us that “Satyaṃ brahma (Truth is Brahman)”. India’s national motto is “Satyameva jayate (Truth alone will triumph)”. The truth is that many of our fellow Hindus have gathered in order to defend heinous atrocities by other Hindus –  actions that were motivated by hatred and bigotry.

This hatred and bigotry, most often directed towards Muslims, but also towards Sikhs, Christians, Dalits and other minorities, is, sadly, becoming a defining characteristic of what it means to be a Hindu today.

We are told, “Hindu khatre mein hain (Hindus are in danger)”. But the truth is, “Hindu dharm khatre mein hein (Hinduism itself is in danger).” Thanks to this violence. And our collective silence.

For the sake of our democracy, our religion and culture, and the legacy we are bequeathing to the coming generations, Hindus must open their eyes to the truth, and speak the truth, without fear. Only then will we see ourselves and others as humans, rather than as part of a clan or cult that always defend its own against others, at any cost.

Sunita Viswanath is with Hindus for Human Rights, USA and Deepak Joshi is with The Humanism Project, Australia.