In Photos | The Chant of Hindu Chauvinism – Ram Navami in Kolkata

While keeping the police and the administration in Kolkata on tenterhooks, the city witnessed 60 Ram Navami rallies over two days where various parties attempted to inflame communal passions.

A child at the Ramnavami procession in Kolkata. Credit: Shome Basu

Kolkata, once again, witnessed a Ram Navami procession in the midst of an election season. The mood in the city was tense and the police, deployed in the hundreds, was on high alert.

The processions in Burrabazar – a bastion for right-wing activities – were in full swing while Cossipore, which is mostly dominated with migrants from Bihar, had similar processions.

Hundreds of men and women – in saffron clad attires – thronged the streets of the city, shouting slogans against Muslims and Pakistan and calling for a Hindu nation. 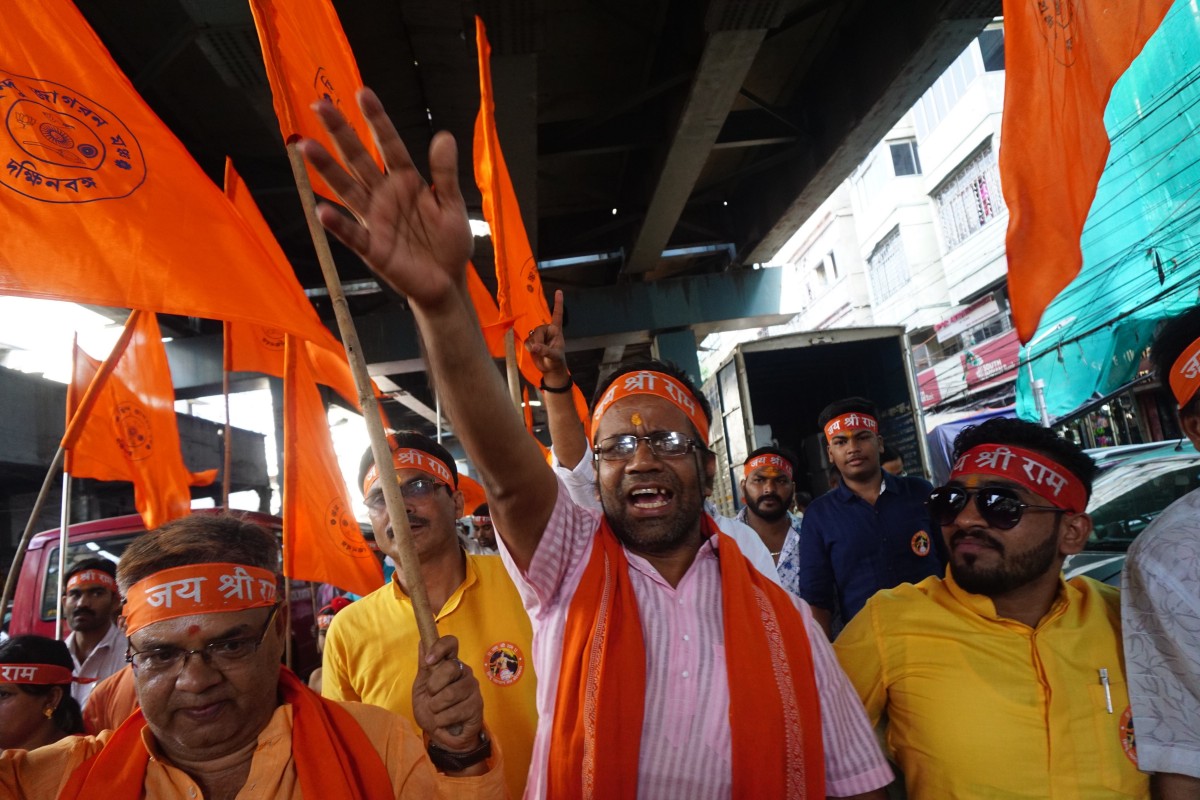 The Manch also focused on the idea of Hindu unity and on keeping Muslims away from the land of Bharat. The tension in the atmosphere became further apparent when the Hindu Jagran Manch cadres crossed Mahatma Gandhi road and the Nakhoda Masjid in Chitpore. 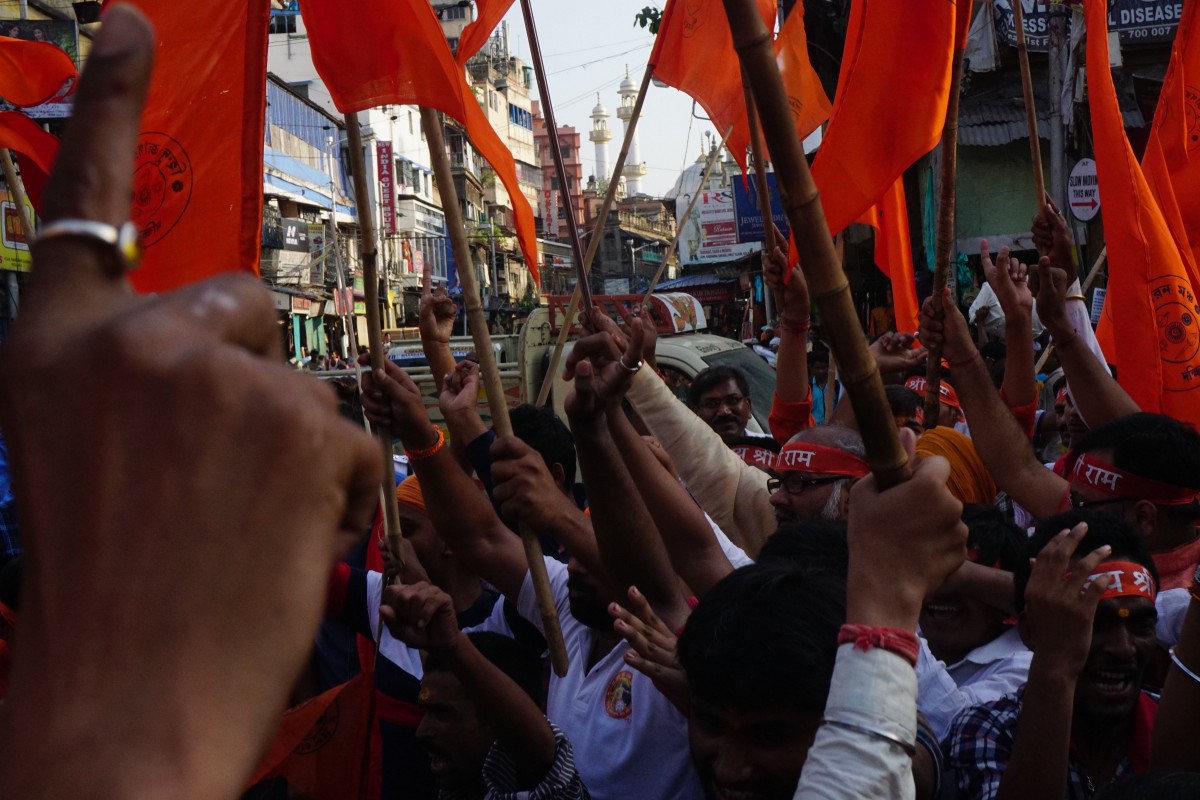 Anti-Muslim slogans are raised at the crossing between Chitpore road and Nakhoda Masjid. The Nakhoda mosque is seen in the background. Credit: Shome Basu 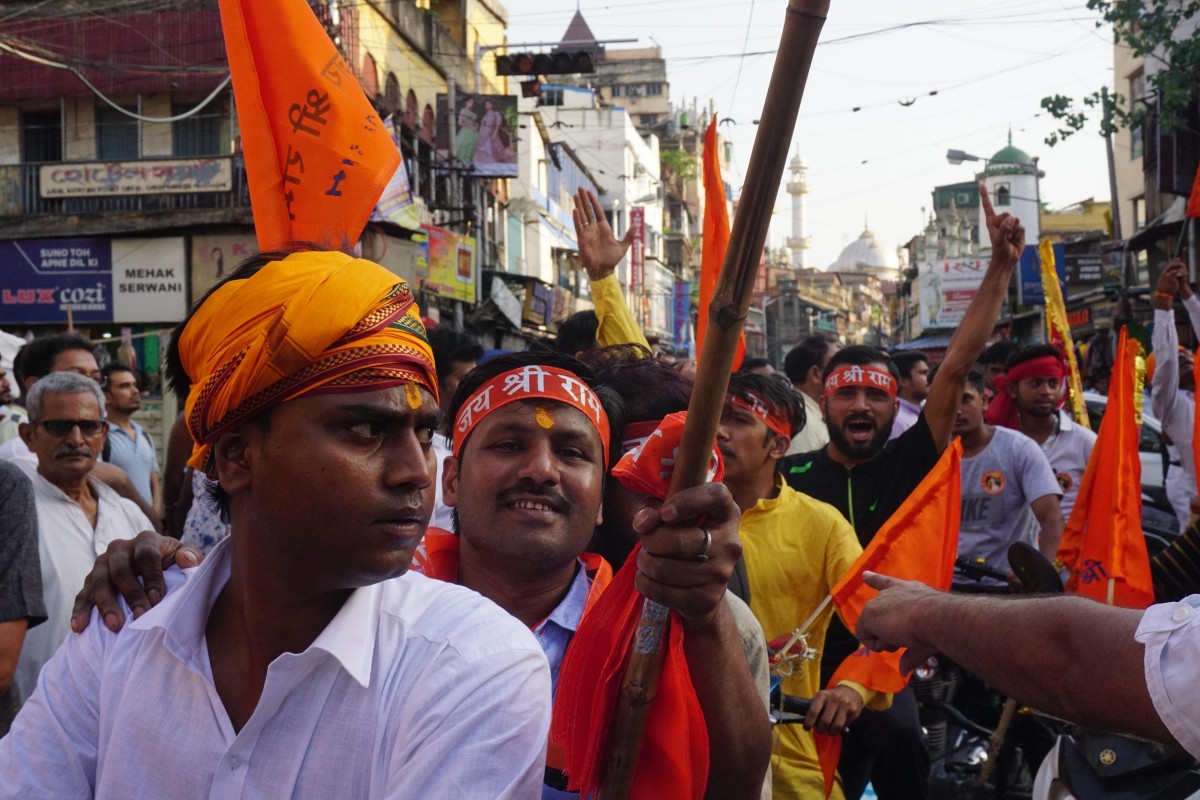 The Nakhoda Masjid is seen behind the procession. Credit: Shome Basu

A bike rally during the Ram Navami procession in Kolkata. Credit: Shome Basu Pankaj Singh, an activist, was confident that the incumbent Trinamool government is finished electorally, as they were only looking to “appease Muslims as they are a major part of the vote bank in West Bengal” and were “not thinking about the Hindus”.

He also claimed that the entire state would “turn saffron in the upcoming elections and Muslims who refuse to chant ‘Bharat Mata ki Jai’ or Vande Mataram will have no place in Bhartiya society”. 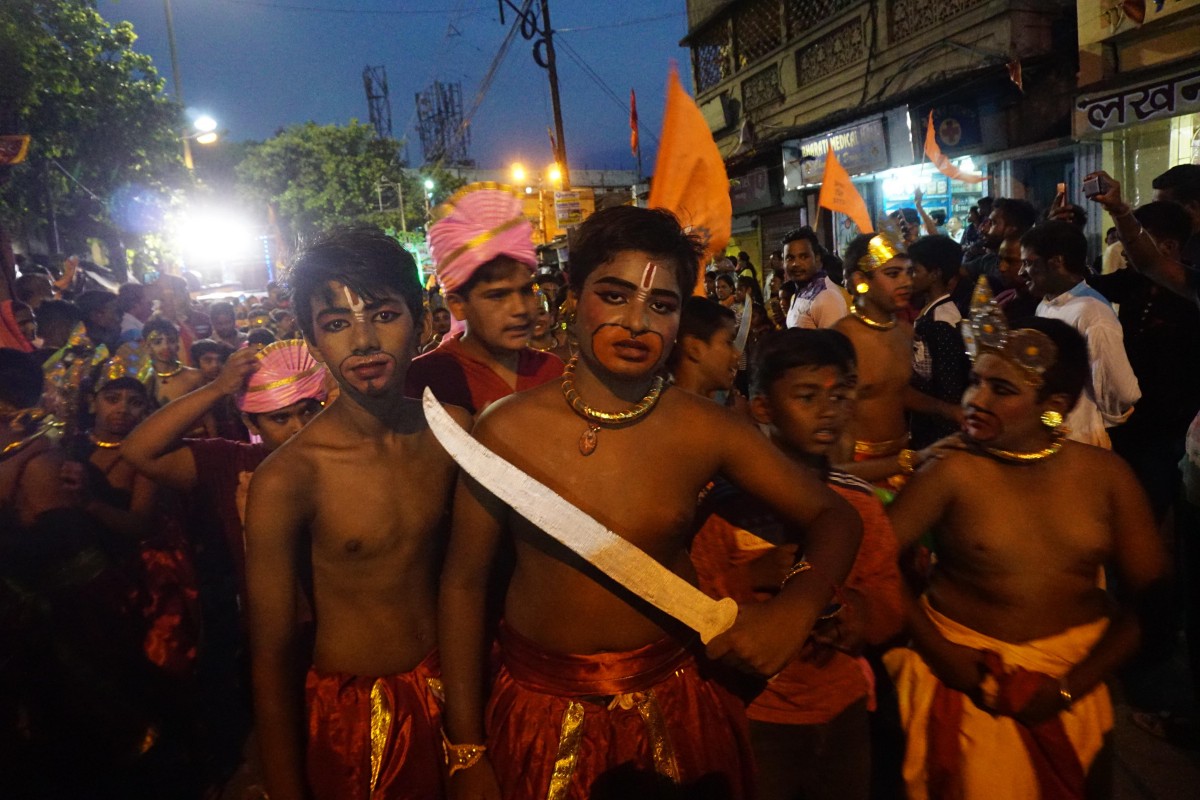 On the periphery of Muslim neighbourhoods, HJM members raised slogans, calling for all Muslims staying in India to choose either Pakistan or their homeland.

Although there was no retaliation, similar anti-Babri Masjid slogans were heard from the crowd which was all decked up in saffron with images of Lord Ram inscribed on their clothes. The one-kilometre-long procession had bikers in a vengeful mood – a clear symbol of Hindu fanaticism against the backdrop of electoral campaigning in the state. 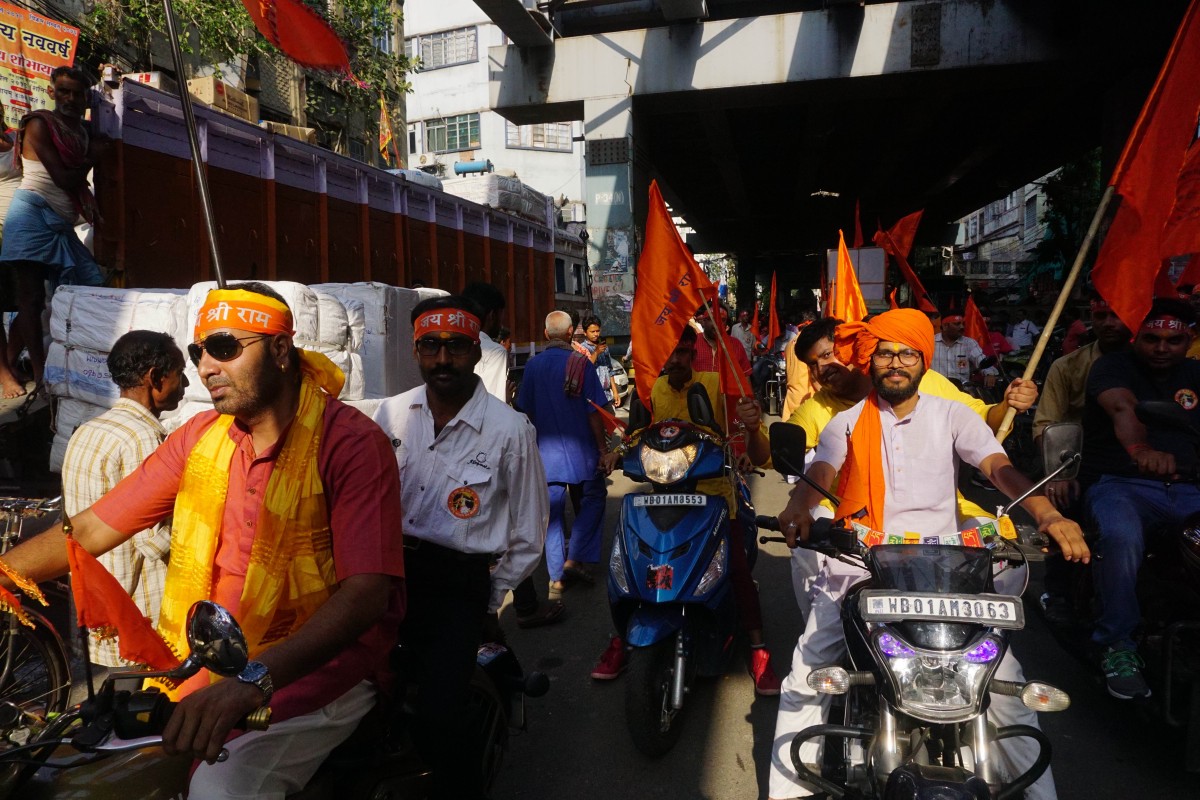 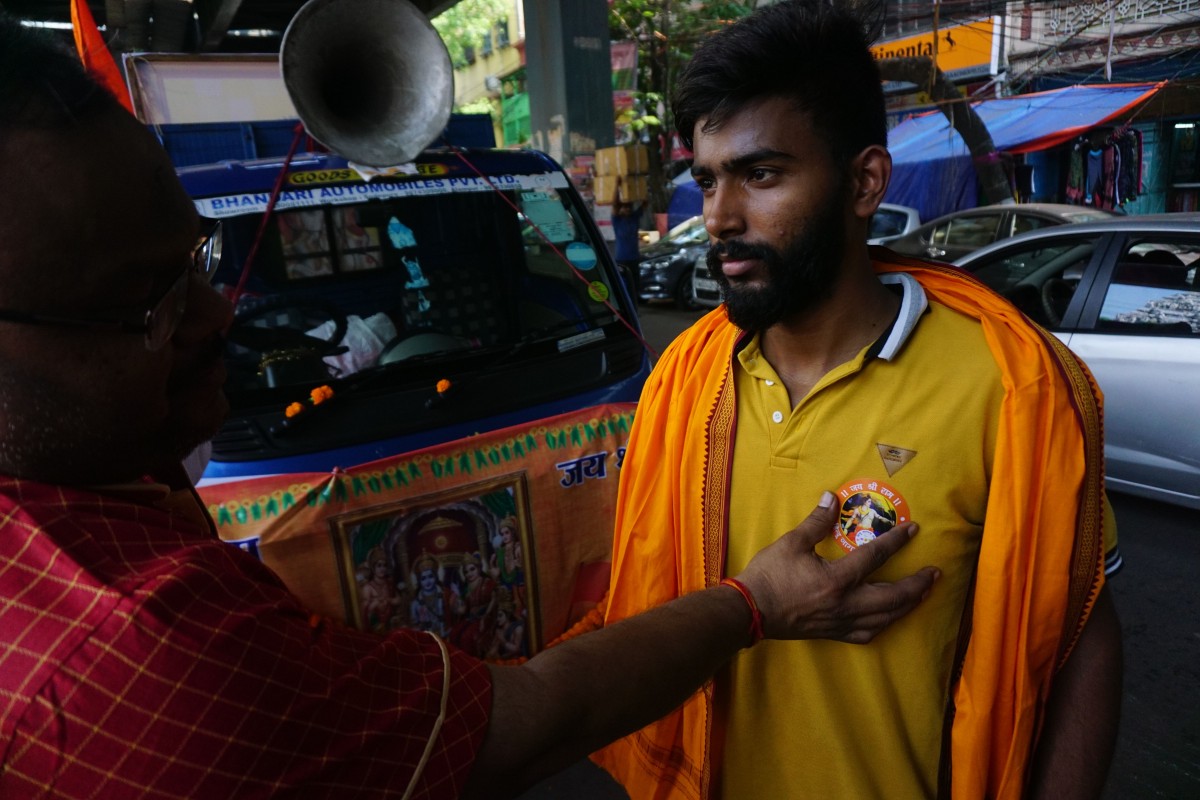 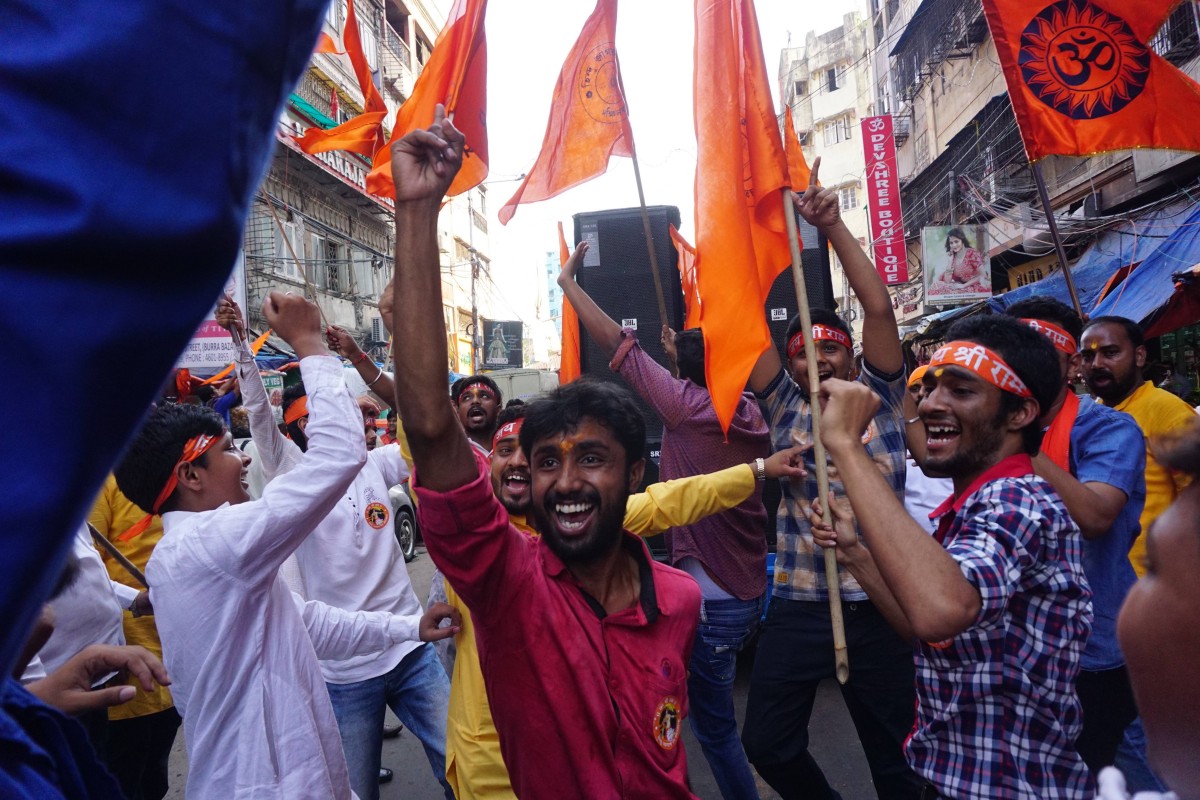 The streets of Central Kolkata were full of hooliganism. Credit: Shome Basu

Chitpore in north Kolkata, on the other hand, was a sight of complete pandemonium as the Trinamool-backed Ram Navami procession raised similar anti-Pakistan slogans.

The Trinamool Congress, along with the BJP, in West Bengal, has taken recourse to religious sentiments to pacify voters in the state. “In the midst of an election campaign in high velocity, such programmes of Ram Navami will yield votes,” says a mid-level Trinamool Congress worker, adding that the BJP would also try to bank on the same electoral bank. Cossipore is the same place where BJP President Amit Shah visited a party activist’s home for lunch in 2017. 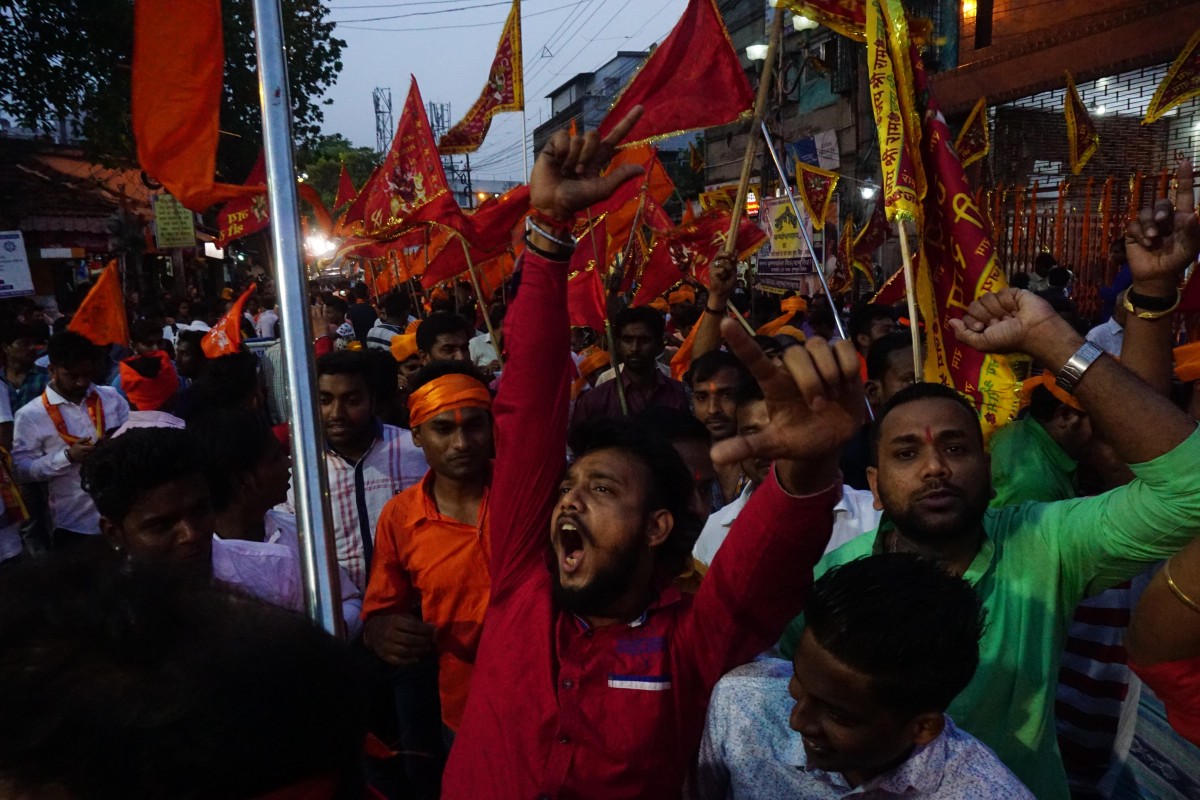 The Ram Navami procession backed by Trinamool Congress looked identical to the one by the Hindu Jagaran Manch. Credit: Shome Basu 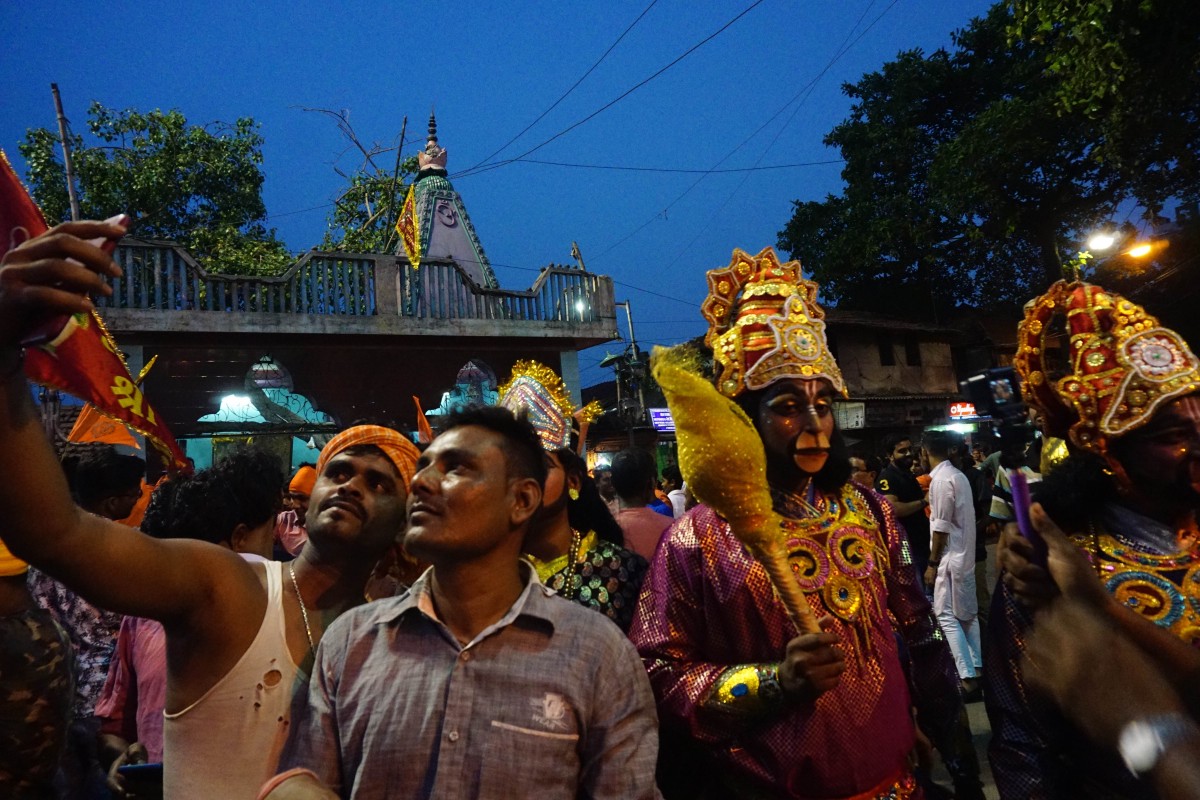 People click a selfie with hanuman at a Ram Navami rally organised by the Trinamool Congress. Credit: Shome Basu

The Trinamool Congress is exploiting the same vote bank in Cossipore and programmes such as Ram Navami are instrumental in enticing the religious sentiments of voters. Although politically, the Trinamool keeps itself away from these programmes, the leadership from the higher echelons of the party  unabashedly wore party symbols.

In the run-up of the 2019 Lok Sabha elections, Calcutta has also adopted the colours of sectarian politics with the Trinamool Congress embracing a policy of ‘soft Hindutva’. The BJP, on the other hand, is using organisations like the HJM, Bajarang Dal and the VHP to antagonise communities and exploit communal politics to corrode at the TMC’s vote bank. Joy Singh, a Trinamool cadre whose wife is the municipal councillor of the Cossipore ward, told The Wire, “Ram Navami is a festival and Trinamool favours to celebrate it in full vigour. All people participating in the rally are our own people”. 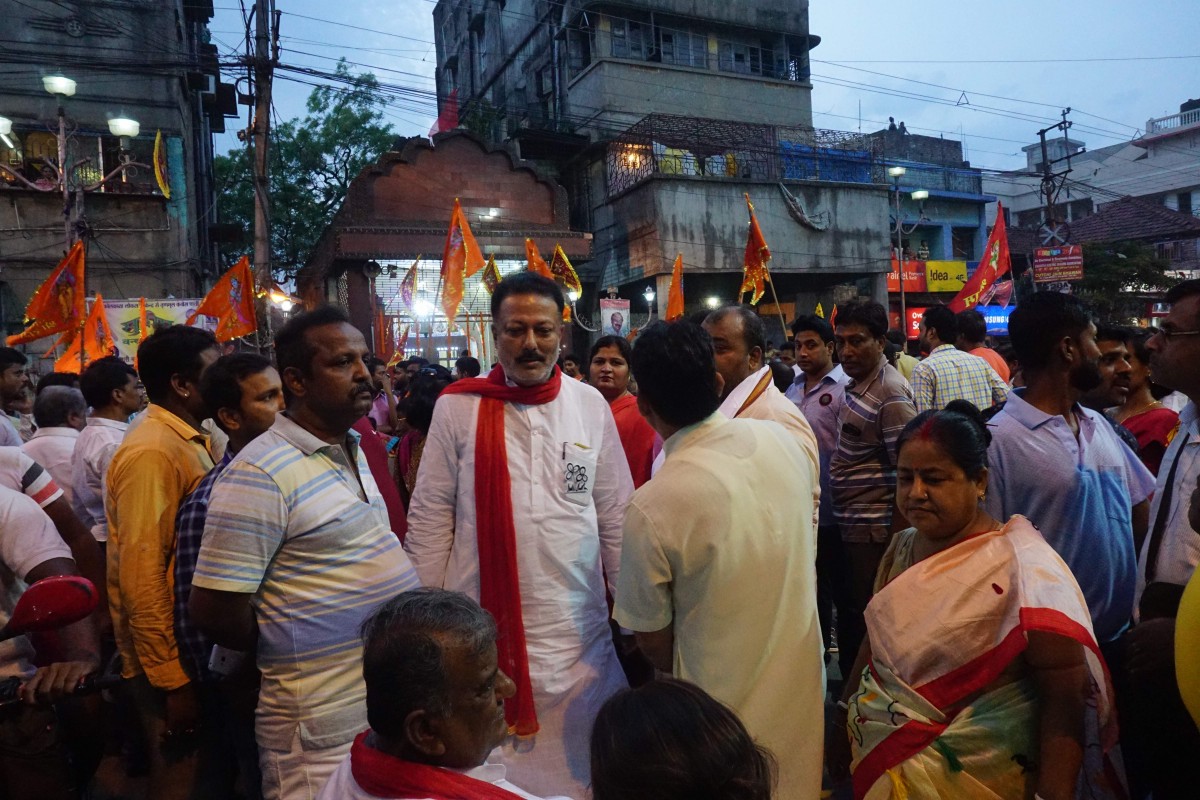 While keeping the police and the administration in Kolkata on tenterhooks, the city witnessed 60 Ram Navami rallies over two days – more than the number of election rallies in the city. But it’s clear that even as Hindu chauvinism is sweeping vote bank politics in Calcutta, the Trinamool Congress has also thrown its lot in by wooing Muslim voters with anti-Modi rhetoric.