While VHP leaders stopped some speakers who were issuing calls for anti-Muslim violence on stage, no such hesitation was visible when these speakers gave bites to the media.

New Delhi: With saffron flags in hand and chants of ‘Jai Shri Ram’ reverberating in the air, members of different Hindu right-wing groups marched on the streets of central Delhi on Saturday (July 9).

After the disparaging remarks BJP spokesperson Nupur Sharma made about the Prophet, the country saw a series of violent protests in different states. Two persons, Kanhaiyalal and Umesh Kolhe, were killed by vigilantes who accused them of supporting Sharma on social media.

On Saturday, Hindutva groups from across the national capital assembled in Sharma’s support under the “Sankalp March” banner. 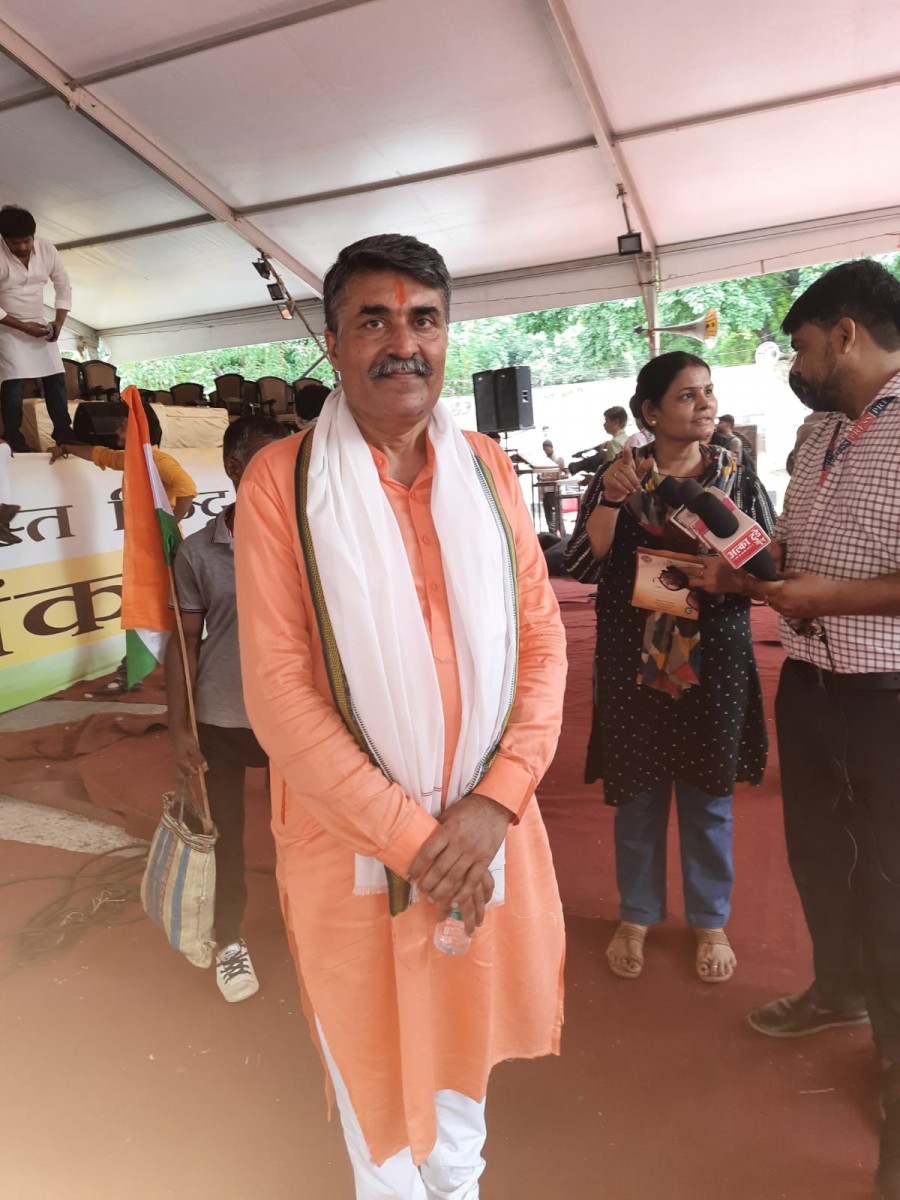 Their march started from Mandi House and went till Jantar Mantar, where a stage had been prepared for leaders to give speeches. The call for this march had been given by the Vishwa Hindu Parishad. The VHP national president, along with other leaders of the organisation, were present.

Men, women and children danced to the tunes of Hindutva anthems. Songs by popular Hindutva figures like Laxmi Dubey were played, including ‘Ek hi naara ek hi naam Jai Shri Ram Jai Shri Ram’. Most of the people present seemed to be in the 18-25 age group.

Some of the slogans used at the rally could be seen as a call to arms, such as “We shall now bear swords if required”. “When we walk out of our holy place, we have prasad and flowers in our hands. When they (a reference to Muslims) walk out of their mosques and madrasas, they have stones and swords,” said Kapil Khanna, Delhi president of the VHP.

The march was clear about its purpose – to “issue a warning”. “Today, we have assembled just to give a final warning to the Muslims. If attacks on Hindus happen henceforth, we shall come in huge numbers on the streets and there shall be no more urges for peace,” said Khanna. On the stage, while there were attempts to give provocative anti-Muslim speeches, the leaders who had called for the march appeared to intervene and stop them. However, in bites given to the press, this hesitation was no longer visible. Calling Muslims “freeloaders”, Sant Siyaram Saraswati, also a member of the VHP, told The Wire, “These people are unfaithful to the country. When crores of vaccines were being given, when rations are distributed, these people will be the first in line to grab them. And then go on to damage peace and harmony in the country.”

The Supreme Court on June 30 slammed Nupur Sharma for her comments on a TV debate, saying, “This lady is single-handedly responsible for what is happening in the country.”

The crowd at Saturday’s rally criticised the judiciary for not taking a clear stand in Sharma’s case. “The case is still pending, whatever the judge said about Nupur Sharma being responsible for all the damage happening in the country is just a statement, it’s not an order, and if someone feels she’s done wrong, should wait until the court gives its judgment,” said one attendee.

The involvement of young people in the protest was noteworthy. While the young in different parts of the country have been criticising the Union government for rising unemployment and the lack of opportunities, those at the march claimed to have no such problems. “Unemployment right now is a secondary issue, our primary concern is the nation. And we have to act against the ones who disturb peace. We have all our life to deal with unemployment,” said a young man at the protest. 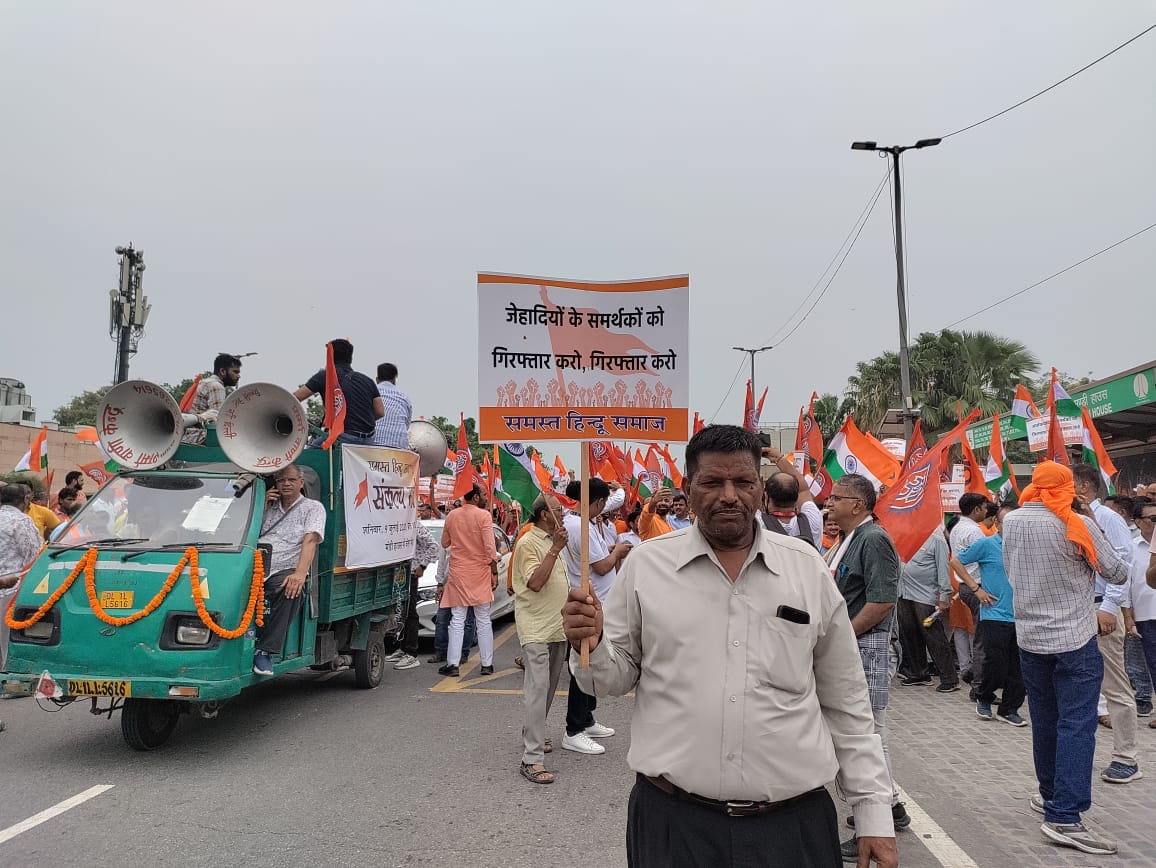 The protest also had members of the Bhartiya Janata Party’s youth wing. The Shahdara district vice-president of the BJP’s Yuva Morcha said, “We are planning some action against these perpetrators. All this while we were quiet, thinking we should not disturb peace, but now we have reached a saturation point.” He went on to say that he felt not just one or two individuals or groups, but the whole community was responsible for the acts of violence. “It is all pre-planned and is always committed in an organised manner. The whole Muslim community knows about it and still does not act against them.”

While VHP members claimed that the call for this mass assembly had been given just two days before, local sources said preparations had been on for a while now.