Muslim bashing is a winning formula in elections and won't disappear anytime soon. 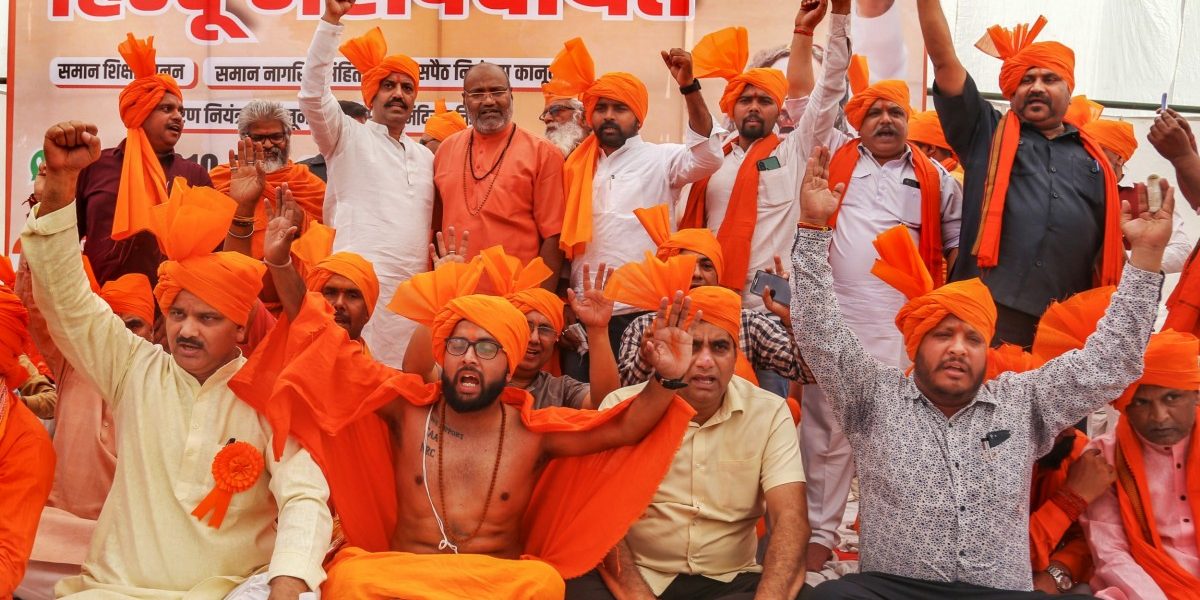 In the 1980s, Pakistani cricket captain Imran Khan, who is currently struggling to save his political career, was a big hit in India, both on and off the field. He was often photographed with glamorous socialites and Bollywood actresses at parties. He modelled for a soap ad, which showed off his splendid masculinity to great advantage – the Indian counterpart was Vinod Khanna.

The word in sports and other circles was that Khan and his teammates were extremely popular with young ladies, and had a great time in India. Indian cricketers were heard complaining that they didn’t get shown the same hospitality in Pakistan.

It now turns out that it is not just Pakistani men who are stealing the affections of Indian women – it is Muslim men in general. A recent tweet by activist Madhu Purnima Kishwar about ‘sex jihad’ and how trained young Muslim studs were seducing nubile Hindu — and Christian and Sikh — women with their superior techniques and prowess became a topic of discussion and derision, but this fear has been around for much longer. 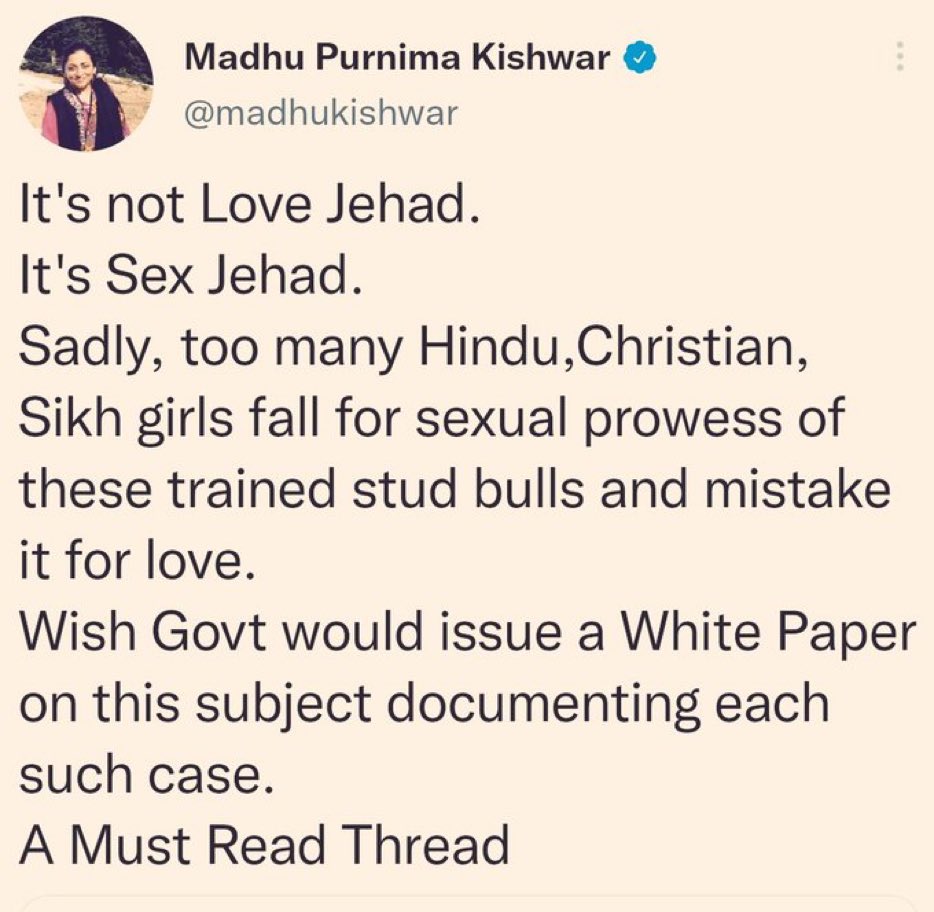 The dashing Nawab of Pataudi married Sharmila Tagore and the Bollywood Khans are married to or linked with Hindu women. Obviously they are part of the same sex jihad conspiracy.

Frivolity aside, less high-profile Muslim men have been beaten up for being with a Hindu woman and some states have introduced a ‘love jihad’ law that prohibits such marriages if they involve conversion. This tweet – now deleted – however, has said the unsayable: it is not love but sex which Muslim men are superior at and weak Hindu men are not. I should think men from those communities, especially Hindus since they are in a majority, should feel insulted by this generalisation.

But why are Muslim men so attractive to women, specifically Hindu women? No answer is given but could a non-vegetarian diet be the answer? Taking no chances, Hindutva warriors in Karnataka have gone after halal mutton which has been around forever and is actually preferred by even other communities. Halal is a form of cut and signifies that the product – and not just mutton – conforms to all that is permissible under Islamic law. Exportable items to the Middle East, for example (and this includes exports from the Baba Ramdev group of companies) are routinely marked halal – no one wants to give up on that lucrative market. The Karnataka government has distanced itself from the controversy, which is clearly manufactured to stir up some pre-election polarisation, but not taken firm steps to clamp down on it.

Karnataka, the new crucible of Hindutva, is also where young Muslim girl students were asked – often in the most crude terms – to take off their hijabs before entering classrooms. It began in a government school in Udupi district and then spread all over the state, with groups of boys often heckling the girls. The BJP government, headed by Basavraj Bommai, an engineer whose father was a prominent socialist, waded in with an order banning wearing hijabs in schools and the courts upheld it. Many girls were left with little choice except to drop out.

There is a pattern to all this. Muslims are often reduced to the most basic of identity markers or simplistic clichés that often find a resonance in even the most ‘reasonable’ of Hindus, many of them of the type who would proudly say they are not communally minded and actually have Muslim friends. And yet, they asked, what was wrong with a school insisting on a uniform. Strangely, this did not apply to, say, a cross, a turban or indeed a caste mark on the forehead. Muslims somehow were different, more in your face, more visibly Muslim.

There is seemingly a vast difference between a Yati Narasinghanand exhorting Hindus to take up arms “If a Muslim becomes the prime minister”, an outlandish possibility, and the Karnataka government banning the wearing of hijab by Muslim girls. But whether it is a call to annihilate or humiliate, the ultimate purpose is the same – spread the canard that ultimately the nearly 200 million Muslims of India don’t count for much. Whether by legislative means – the Citizenship (Amendment) Act — or by disallowing Muslim traders near temples, which would take away their means of earning a living, the forces of Hindutva are turning Muslims into either non-citizens or non-people, whose well-being doesn’t, or shouldn’t, matter to the rest of us.

Also read: Gujarat: Ahead of Polls, Right-Wing Groups Step Up Attacks on Symbols of Syncretism

Kiran Majumdar Shaw, the chairperson of Biocon and an influential businesswoman, has immediately spotted the danger of these moves, especially in Karnataka, where she has based. She pointed that such divisive moves would be bad for business in the state, a brave statement indeed in an environment where big business tycoons often remain silent, out of diplomacy or fear. The BJP naturally got stung, but the comment should make the government at least wake up to assess the possible economic fall out.

But chances are it won’t. In the BJP and Hindutva mind, Muslim-bashing is a sure-shot formula for electoral success and that is the ultimate aim, the economy and social disharmony be damned. Hindutva troops and fellow travellers too are in perfect sync with this philosophy and rise to the occasion, or sink to the depths, on cue. Besides, the BJP and its parent organisation know little else but deep hate for the Muslim.

But elections are only one part of it – the hate goes much deeper. The campaign against hijab or halal meat are not going to disappear any time soon – but will spread even in states not ruled by the BJP, a vast majority of the country. The Hindutva mobs are going after other businesses who stamp halal on their exports to the Middle East or even print their ingredients in Arabic (foolishly mistaken for Urdu, another ‘Muslim’ feature). Nor is it limited to Muslim-owned companies – even Haldiram has been targeted. Anything redolent of Muslimness has to be stamped out

Therein lie the prejudices and the anxieties of Hindutva. Anything that connects with Muslims has to be driven out of sight, out of mind and if possible, out of the country. The Hindu rashtra should have no place for Muslims, or anyone who does does not identify as a rabid Hindu. It is a wild, perverse fantasy, but these crazed crowds will go to extreme and dangerous lengths in its pursuit.