Days after a threat from an RSS ideologue, the IT department 'rectifies' its earlier assessment and orders a fresh 'complete scrutiny'. 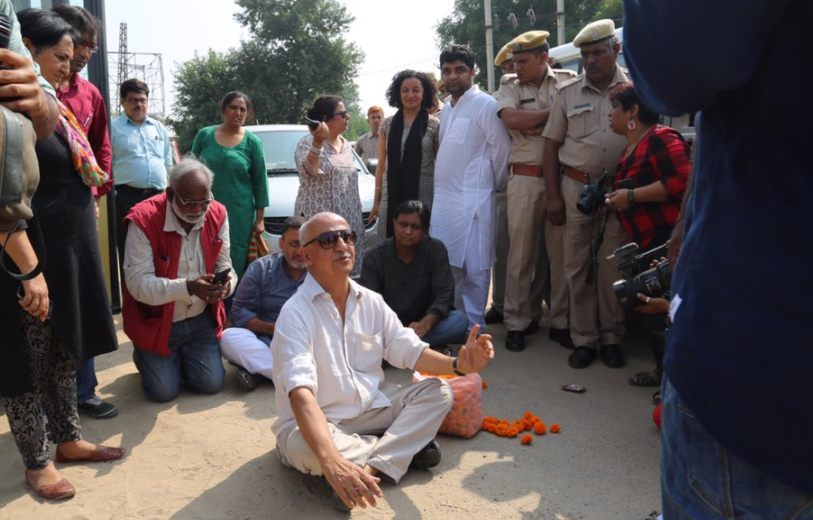 In a press note issued on Saturday, the noted human rights activist and former IAS officer has questioned the timing of an income tax notice to the Centre for Equity Studies, a think-tank that he helps run, and asked whether it is being targeted because of the work Harsh Mander and others are doing to show solidarity with the victims of communal violence across India.

The press note is published below in its entirety.

A number of independent individuals, organisations and social movements collaborated to take out through many parts of the country a Karwan-e-Mohabbat, as a journey of atonement, solidarity, healing, conscience and justice with people living with hate violence. This was an entirely crowd funded Karwan, and the funds for this were received by Aman Biradari Trust, which does not have an FCRA.

On September 15, 2017, the Karwan was scheduled to stop at Behror at the site at which Pehlu Khan had been lynched, to pay tribute to his memory by placing a few flowers there. But a day before this, the Hindu Jagran Manch, Bajrang Dal and VHP announced that they would not allow the Karwan to pay this tribute. The Karwan responded by announcing that it would press ahead with its proposed tribute despite all opposition. In a television debate on September 14, 2017, in NDTV’s Left, Right and Centre anchored by Nidhi Razdan, I joined by phone from the Karwan bus. Mr Rakesh Sinha of the RSS during the debate made angry personalised attacks against me. He also said that I was against the RSS. I replied that I am indeed against the ideology of the RSS, because its belief in a Hindu rashtra contravenes the Indian constitution. During this same debate, Mr Sinha said, in a barely veiled threat, that the funding of ‘my’ organisations would be investigated. The next morning, despite stone-throwing mobs, I did finally prevail in placing flowers at the site of Pehlu Khan’s lynching.

Four days later, an organisation of which I am the director and one of the founders, the Centre for Equity Studies, received by email a notice under Section 143 (2) of the Income Tax Act for a Full Scrutiny of the income tax returns of the Centre for Equity Studies for the assessment year 2016-17. This has been followed by another notice dated September 20, 2017, by which they have retrospectively and suo moto rectified their earlier assessment order that our returns are in order. Both these order are attached.

The Income Tax Department may claim that this is just a routine notice. But the timing of the notice shortly after the public threat for getting the funding of ‘my’ organisations investigated, and the fact that less than 1 per cent of returns are scrutinised, suggest that this could well be an act of state vengeance and intimidation.

I would also like to point out that the Centre for Equity Studies had nothing whatsoever to do with the Karwan-e-Mohabbat. It brings out the annual India Exclusion Report, and works with homeless persons and other vulnerable groups.

We are happy to subject ourselves to any scrutiny, and will fully cooperate with the investigation, as we believe in public accountability. But I would like to state categorically that no amount of state intimidation of the organisations that I am associated with, would succeed to silencing my public dissent with policies and ideologies that I believe are detrimental to India’s constitutional values.