Gurugram: 30 Held for Disrupting Namaz in 6th Straight Week of Such Protests

Gurugram SDM Anita Chaudhary said full protection will be given to the people offering namaz in the 37 designated places. 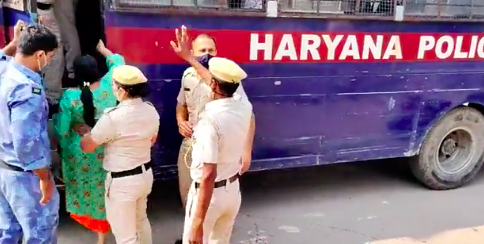 A screengrab of a video showing police leading namaz protesters into a police vehicle. Photo: Twitter/@@pub_neat

New Delhi: Thirty people were detained after they allegedly attempted to disrupt Muslims offering prayers in Gurugram by shouting slogans and holding up placards, in what appears to be the sixth straight week of such protests in the city.

NDTV has reported that many of the protesters were from rightwing Hindutva groups. Sector 12A, which saw the protests on Friday, also saw similar disruptive protests earlier this month, along with Sector 47, where protests during namaz have been taking place for over a month now.

The placards they held read, ‘Gurgaon administration, wake up from your sleep’ as they shouted “band karo”.

Police detained protesters (members of right wing outfits and residents) who had gathered to disrupt namaz in sector 12 on Friday. Protesters raised slogans before they were hauled off in a bus and detained. pic.twitter.com/6Cgnh8NQ3y

On Friday, heavy police deployment in Sector 12-A ensured a quick end to the stir.

“Everything is peaceful here. We have detained people who were here to disrupt namaz. We tried to negotiate with them over the last few weeks (but) have taken swift action today,” Gurugram SDM Anita Chaudhary told NDTV.

SDM Chaudhary said full protection will be given to the people offering namaz in the “37 designated places”.

Namaz is limited to certain designated spots in Gurugram, which have of late been seeing pitched efforts from Hindutva groups to disrupt prayers.

The Wire has reported on the concerted campaign that led to the designation of such places. In 2018, men attacked Muslims offering namaz at a public space and forced them to chant “Jai Shri Ram”. A series of similar attacks followed and accusations of “land jihad” were levelled against Muslim men by militant Hindutva leaders like Yati Narsinghanand.

The Wire has reported that one Dinesh Bharati, a leader of the Hindutva group Bharat Mata Vahini, is central to these protests. He had been arrested earlier for disrupting Friday prayers.

NDTV has reported that among those challenging the namaz last week was a local lawyer named Kulbhushan Bharadwaj who is allegedly a former BJP leader and represented the Jamia Millia shooter when he was arrested by Gurugram Police for allegedly making communal speeches.