While some families have returned after the village sarpanch promised them safety, several others still feel that their homes are still unsafe. 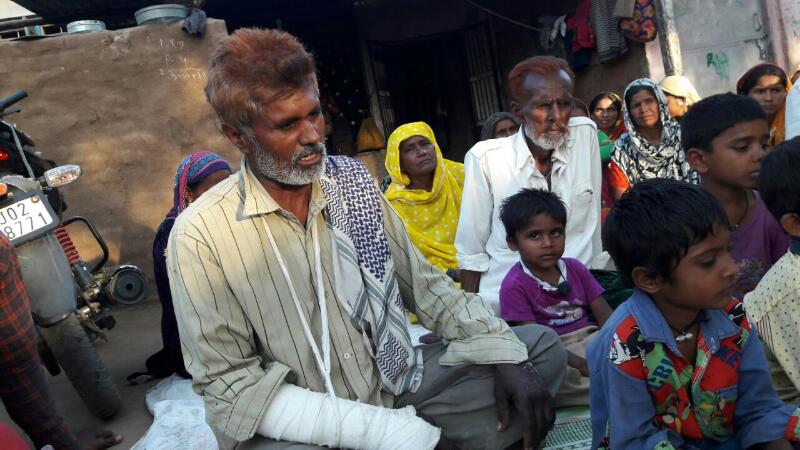 Vadagam, Gujarat: Vadagam, a village in the Dhansura block, Aravalli district of North Gujarat, is home to about 1,400 households. Of these, 35 are Sindhi Muslim families (also called Sandhai, a nomadic tribe), who settled in the region years ago.

The village is heterogenous, including Brahmins, Patidars, Darbars (Kshatriyas), Dalits and Sindhi Muslims. Yet, travelling towards Vadagam from Dhansura, you cannot miss the multiple boards that read, “Hindu rashtra ke Vadagam, Dhansura, Harsol aur Talod me apka swagat hai (Welcome to Hindu rashtra’s Vadagam, Harsol and Talod)”.  The boards are signed by the Vishwa Hindu Parishad and Bajrang Dal.

For years, Sindhi Muslims’ labouring skills have secured a cordial relationship between them and other residents of the village. They provide multiple services as labourers, including working in the agricultural fields of others, in stone quarries and as wood cutters and truck drivers. Even when riots shook Gujarat in 2002, affecting Vadagam, the area where the Sindhi Muslims live remained peaceful.

However, an incident on March 23 changed that dynamic, possibly forever. All 35 families, scared for their lives, decided to leave their decades-old homes and flee from Vadagam.

Like on any other day, 27-year-old Akbar, who works as a labourer, came home from work and was playing music on his tape recorder. A minor girl from the village, belonging to the Valand community, passed by his residence. According to her, Akbar harassed her as she passed.

The teenager went back and told her family this, following which around 25 people, including the girl’s family members, came to Akbar’s residence. They verbally abused Alllubhai, Akbar’s father, and beat up Akbar.

Scared after the incident, Akbar left his home to hide at his aunt’s house across the road. At around 4 pm, another group of about 20-25 people came looking for Akbar at his residence. “They kept shouting ‘Akbar ko hamare havale karo, warna bura hoga (Give Akbar to us or face the consequences)’. On not finding him they left, but only to return with a bigger crowd,” said Palekhan, a resident of the village.

“At around 8 pm, a mob of about 500 villagers from all the other communities that live in Vadagam attacked us. They had wooden staffs, swords and iron pipes,” added Palekhan.

“Most of the Sindhi Muslims who fled leaving their home took refuge in their relatives’ houses. Those who could be tracked down were found to be living in Karshanpura Kampa (Harsol), Charodi, Koba and Bhalak (Ghandhinagar), Akroli (Kaparwanj), Bavsar (Dharoi) and Bijapur,” said Hozefa Ujjaini, a human rights activist and also a member of the fact-finding committee that took up the case on April 5.

“However, 50 of these people had no place to go. They were living in a forest area called Borna Kampa in Harsol. Aminaben was one of the people who returned to the village area after the fact-finding committee convinced the trustees of a local dargah, Jamala Kamalsa, to open up their premises to these people. About 20 families have come so far, the rest are still scared, including Allubhai, Akbar’s father,” added Ujjaini.

The Sindhi Muslims of Vadagam and Nayagaon, a neighbouring village, claim that this act of violence is not an isolated incident. The fact-finding report by a team of six activists including Ujjaini also states that two years ago, two girls from the Sindhi Muslim community fell in love with men from outside their community in Vadagam and married them. The girls have been untraceable since then.

“We never heard from (20-year-old) Shabana and (28-year-old) Mallika after they got married. They never visited us, we never saw them again. We did not try to file a complaint. We don’t want to create trouble for ourselves,” said a Sindhi Muslim from Vadagam who fled with his family of six on the ill-fated day.

K.N. Damor, superintendent of police (SP), Aravalli, said, “I have been busy with the bandobast for the prime minister’s visit and don’t know much about the matter. The issue, I believe, is a feud between two communities in the village. A meeting was called by the district collector on the matter.”

“The Sindhi Muslims have been living in peace for years in these villages. Their ancestors were from Kutch, who were allowed and accepted in the village by Sangram Sinhji (a descendant of Keshavdasji Rajsinhji, a Rajput ruler and founder of the Wadagaon princely state). During the riots of 2002, Sinhji was still alive and he saw to it that their mohalla was not affected. However, things started changing post the riots of 2002. Even though the neighbourhood where Sindhi Muslims reside wasn’t affected, a maulana was killed in a neighbouring village. That sowed seeds of communal antagonism that were never resolved. That was perhaps the first blow to the historic cordial relationship between communities in Vadagam. Things started getting worse and after the death of Sinhji. Even a small family feud between Ravals and Sindhi Muslims would turn communal,” Mirkhan, a local activist who has been working with 2002 riots victim and has been acquainted with the community for a long time, told The Wire.

“Three years ago, villagers from all communities jointly objected to the azan on the loudspeaker from the local mosque, stating that their kids get scared by the sound. The loudspeaker had to be removed from the mosque. Till date, there is no azan delivered from the mosque of the village. That same year, they objected while we were taking out the tazia procession during Muharram. The villagers only relented when Sindhi Muslims agreed to take the procession through another route in the village,” he claimed.

Mob violence did not just affect only Vadagam that day. Some agitators reportedly also reached Nayagaon, a neighbouring village, and threatened Muslims there.

“Nayagaon is about 24 km away from Vadagam. That day, some 25 men from Vadagam came to our village and threatened us, telling us not to help our relatives from Vadagam. That is how we knew about the incident. They also threatened villagers from other communities and warned them against helping us or our relatives. Scared for their safety, some Sindhi Muslims of Nayagaon fled their homes the same night,” said a resident of Nayagaon who wanted to remain anonymous. Despite the threats, he had come to Vadagam looking for his relatives. 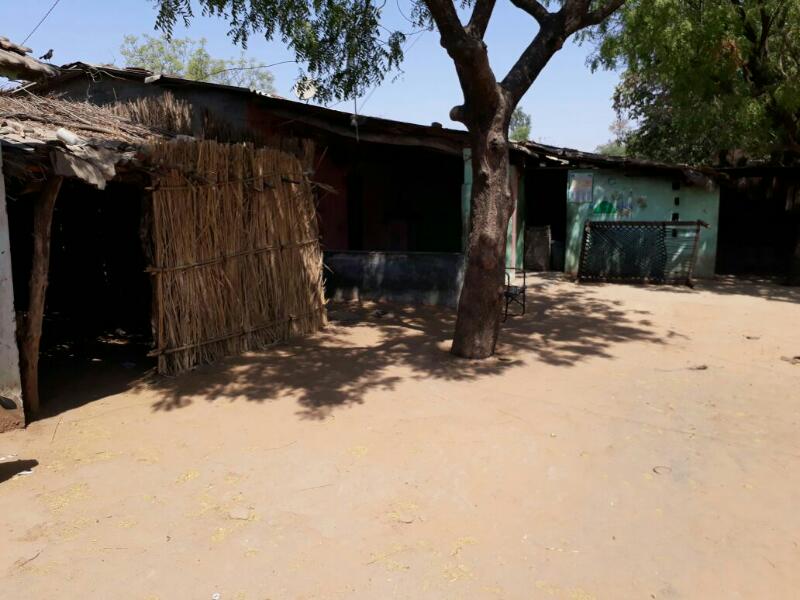 The fact-finding report states that among arrested are Akbar and his three brothers, three from another family and Aminaben, the 70-year-old woman injured in the attack. The reports also states that Aminaben was arrested post 6:30 pm in absence of female police personnel.

The police later released four of the arrested, including Aminaben. However, Akbar and his brothers are still under arrest. Charges have been filed against them under the The Protection of Children from Sexual Offences Act, 2012.

“The police inspector of Dhansura went on leave after the incident and is yet to resume work. His absence is delaying the legal process of bailing out the four youths who are still arrested and filing an FIR against the attackers,” said Waqar Qazi, a social activist associated with the Centre for Social Justice who is working for the relief and rehabilitation of the 35 families along with the fact-finding team.

“We have submitted a memorandum to Shalini Aggarwal, the district collector of Aravalli. But as usual, no government machinery has come with any form of aid. Some religious organisations have agreed to help to set up relief camps and provide food,” stated Ujjaini. He further said that most of these Sindhi Muslims lived in shanties with tinned roofs. Only 17 household had managed to build a concrete house for themselves. On March 24, all of them left their house open and ran for their lives. Most of the houses were looted after they left.

Meanwhile, in response to the memorandum, Aggarwal called a meeting on April 17. The meeting was attended by the Aravalli deputy SP (in the absence of the SP, who was busy with arrangements for the prime minister’s visit), the block development officer of the Dhansura block and five social activists from the Samajik Nyaya Manch, a local human rights organisation. The family of the minor girl and 30 other Hindus from the village were also present.

Reportedly, the father of the minor girl stated in the meeting that the neither the family nor the Raval community want the Sindhi Muslims to be back in the village.

However, after the meeting, the Raval community agreed to live peacefully with the Sindhi Muslims. Sakrabhai Raval, a resident of Vadagam and community chief for the Ravals in the Aravalli district, told The Wire that it was a “minor incident”. “I have told all my people that we and Sindhi Muslims are like brothers,” he said.

Sakrabhai also denied knowledge any past incident when villagers stopped the azan or interrupted the tazia procession. “Who told you all this? Give me the name of the person. This is not true,” he said. He also denied that the Sindhi Muslims were attacked on March 23.

Village sarpanch Surayabhan Sinh said, “I got to know about the matter when the district collector called me for the meeting. The Sindhi Muslims did not come to me, instead they reached some NGOs and filed a memorandum with the collector. However, the matter has been resolved. We have asked the Sindhi Muslims to be back to Vadagam and they have agreed.”

The Sindhi Muslims, however, are still scared and have asked for police protection. Some of them, though, have started returning to the village on assurances from the sarpanch.

“We are traditionally nomadic people. Years ago, our ancestors trusted the villagers and settled here. Our kids were born here, grew up got married here as we made Vadagam our home. They did not just attack us and take away our homes, they took away the faith we had put in the villagers,” said Palekhan.

“We will never feel safe again in our own homes,” added a woman from the community.