"If Muslims want to live in my country, they will have to say 'Jai Shri Ram'," said one member of mob that was protesting the opening of Blueivy hotel. 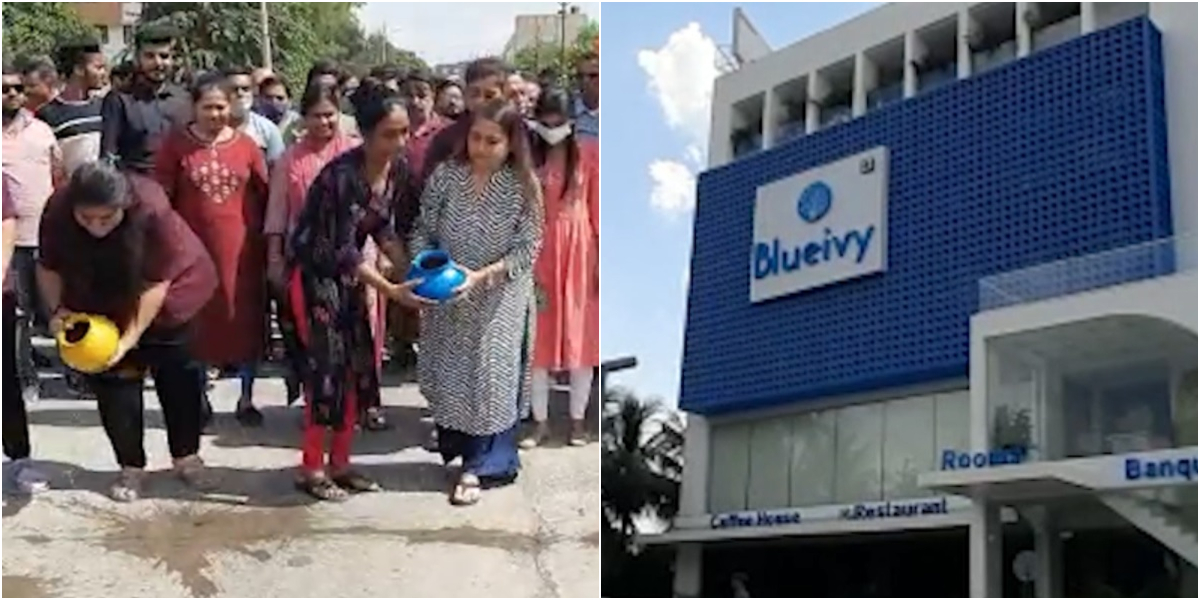 Screengrabs from a video of protests. Photo: Social media

Anand: When a 60 plus-year-old man Kisanbhai (name changed on request) shouted that Muslims should be beggars, not hotel owners, he meant it.

“This is my country. America is not my country. If Muslims want to live in my country, they will have to say ‘Jai Shri Ram’. Whenever we ask them to”, he said, not taking into consideration that his son who lives in the US works for a Muslim-owned company as he furiously shouted anti-Muslim slogans.

Kisanbhai was one of the 100-odd people who protested at Anand in Gujarat on Tuesday, October 26. The target of their ire: Hotel Blueivy. The Hindus feel that the hotel has no place in “their area”. Two of the hotel’s three owners are Muslims. The group which had doctors, lawyers and students sang Ram Bhajans, Ram Dhoons and sprinkled Ganga jal to “purify” the area. “The hotel has to go,” Binaben Patel said. “This is a Hindu area. This hotel is owned by Muslim[s]. It is a blot on our Hindu culture to have this hotel here”.

Hotel Blueivy, which has a banquet hotel, restaurant, hotel rooms and coffee shops does not serve any non-vegetarian food. Not even omelettes or any other egg items. “So what,” another woman screams. “This hotel is owned by Muslims. It is a sin for us to see them also.”

Another catch: of the hotel’s three owners – a Gujarati Patel and two Gujarati Muslims – all dress alike. They have no beard or skull caps. So how do the Hindus know they are Muslims? “We can feel it. This entire area was very good. The vibes are different since this Muslim-owned hotel has come up,” another housewife chips in.

Anand is home to AMUL, the world’s largest milk cooperative. It is also a cosmopolitan town. Every other home in Anand has an NRI (Non-Resident Indian) connection. But for the past few years, polarisation has taken over this beautiful town. Verghese Kurien, the father of India’s White Revolution lived here. The National Dairy Development Board (NDDB), a statutory body set up by an Act of parliament and falls under the jurisdiction of the Union Ministry of Fisheries, Animal Husbandry and Dairying, is headquartered here. The renowned Institute of Rural Management, Anand (IRMA) where students from across the world come to study is located here.

But Hotel Blueivy, located in Vivekanand Vadi road, cannot be located there because it has Muslim owners with a majority stake.

Hasan Ali, one of the hotel owners, was reluctant to talk to Vibes of India, fearing an onslaught. He told us that he is terribly depressed. “There is nothing illegal about this hotel, its plans, its location, its construction. I have invested over Rs 10 crore,” he said.

Most Cheliyas run restaurants that have secular names like Bharat, Navjivan, Sarvoday and Jaihind. During the 2002 communal violence in Gujarat, restaurants run by Cheliyas with names like Tulsi, Aangan, Kabir, Kalpana were also attacked. In one Cheila Muslim restaurant that was attacked, two waiters were burnt alive. Both were Hindus.

Now, people in Anand are objecting to the Muslim ownership of the Blueivy Hotel. “No matter what I say, I will be targeted. I feel depressed and anxious all the time. We have invested crores in the project and now the residents are not allowing us to function properly. Respecting the sentiments of the residents, we are not even serving non-vegetarian food, but it seems that’s not enough. Our project is legal, there is no black money involved but no one considers that side of the hotel. Let’s see what Allah has in store for us, we leave everything on him. Because there is no one else helping us,” Hasan Ali told Vibes of India.

Cardiologist Shailesh Shah runs an 18-bed private hospital in Anand. He lives adjacent to the hotel. He actively took part in the protest on Tuesday to shut down the hotel. He said, “All we did is sing Ram dhun on the road, sprinkled Ganga jal in the area for shudhikaran (purify) of the place and gave speeches on Hindus and their legacy. I’m not against the Muslim community but Muslim owners building a banquet, hotel and restaurant in an area with three Hindu temples — Siddhivinayak, Ambaa maa and Saibaba — is wrong on all grounds. We wanted to stop the owners from inaugurating the hotel and therefore we protested.”

Of course, the cardiologist was not alone. In perhaps not-so-unprecedented scenes that define ‘New India’, several seemingly educated, self-employed, working-class professionals and housewives gathered outside Blueivy Hotel in Anand, Gujarat and sang Ram dhun, sprinkled Ganga jal and shouted slogans demanding the ‘removal’ of the hotel from the area.

Height of Extremism: People in Anand, #Gujarat opposing the opening of a restaurant owned by a #Muslim . Here’s the result of 20-25 years of vibrant Gujarat ceremonies. Where is this nation heading? pic.twitter.com/0hNvjVjTEK

The owners of Blueivy Hospitality Private Limited, which is located on the 80 Feet Road in Vivekanand Vadi, Anand, were subjected to slogans such as “desh ke Gaddaron ko… joote maro salo ko (beat the traitors with shoes)” – a milder version of a slogan made popular by some Bharatiya Janata Party leaders during election campaigns. They also threatened the owners. “If you want to stay in this country, you will have to say Jai Sri Ram,” the mob warned. “Is desh me agar rehna hai, Jai Shree Ram bolna padega to Anand mein agar rehna hai, Jai Shree Ram hi bolna padega.”

The hotel was originally owned by Anand-based builder Krishna Patel, who brought in two Muslim men as his partners – Hasan Ali Sunsara and Mustakali Sulemanbhai Sunsara.

Hitesh Patel, an investor in the hotel and Krishna’s father, told VOI, “This is a commercial property. I invested in the project and my partner Hasan runs it. I am too occupied to run the hotel and Hasan is much much better skilled than me. However, residents of the area are harassing me also for having Muslim partners and calling me a traitor. The residents tell me that they will let me run the hotel if I remove Hasan and Mustak. But both of them are such lovely human beings and we make a great business team. It is a joke to say that Gujaratis do not eat non-vegetarian food, but still keeping local sentiments as a priority, we don’t even serve non-vegetarian food. People think it is disrespectful to have Muslim business partners. I’m at loss for words.”

When Vibes of India contacted Ramesh Patel, who was part of the protesting mob, he described himself as a ‘proud Hindu’ and said that it was “criminal” for Muslims to own and run the hotel in a Hindu area. “There is a prominent Sai Baba temple that I visit every day. I hate to see this Muslim-owned hotel’s board on my way to the temple.” When pointed out that Sai Baba himself was a Muslim, he brushed it aside as a ‘complete lie’.

Ajit Rajian, superintendent of police, of Anand told Vibes of India that the matter is “subjudice” and pending before the Gujarat high court and hence he would not comment. “We have however ensured that law and order is maintained at the venue,” he said.

One of the residents said, “Krishna Patel is a big builder in Anand and would have got any partners. Why has he chosen these anti-national Muslims? Krishna Patel should be ashamed. I have been opposing since 2019 when Krishnabhai made the land deal and got these Muslims. He has such a beautiful name: Krishna but why has he lost his head and got these two pro-Pakistani Muslims as partners?”

When asked how the Muslim partners were “pro-Pakistanis”, he casually but confidently said, “All Muslims are.”

After two years of construction, the hotel is ready to begin functioning. But the management is wary of inaugurating it as the residents have threatened to “take their fight to the next level”.

Gujarat Congress president Amit Chavda, who hails from this district, said, “The idea of imposing religion on people kills the constitutional rights of Indian citizens. This is the end of individual freedom. This protest is engineered by saffron-leaning people.”

Social entrepreneur and activist Bhavna Ramrakhiani said, “During the 2002 riots, we saw intelligent people remain silent. Now we see them actively participating in anti-Muslim propaganda. This is how far Gujarat has become ‘vibrant’. This is the only difference. A true Hindu would never believe in violence. Ironically, the biggest beef exporters in the nation are Hindus. Today, there is this constant sense of fear where even if a Hindu wants to stand up for a Muslim, he can’t. Such incidents are illogical but they take place with the sanction of the state, warna itni himmat kise hoti?”

This article was originally published on Vibes of India. It has been lightly edited for style and clarity.