Meerut SP Akhilesh N. Singh has not disputed the authenticity of the video, in which he also said that "every man from every house will be arrested". 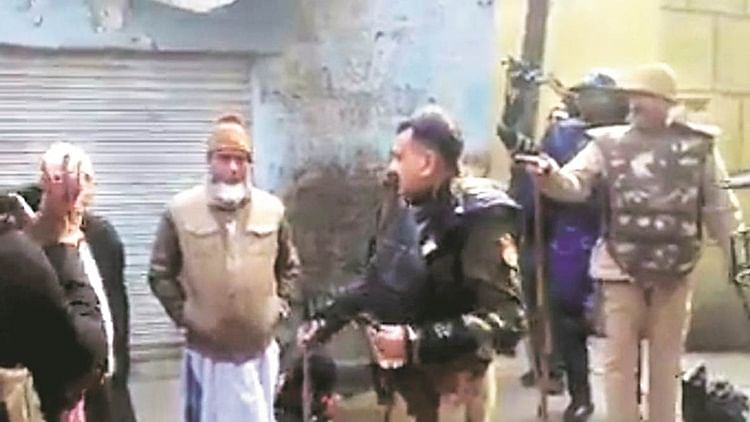 Photo: Screen grab from the video of the Meerut SP saying, "Go to Pakistan."

The Superintendent of Policy (City) Akhilesh N. Singh has not disputed the authenticity of the video. Instead, he has alleged that “anti-social elements were making pro-Pakistan statements” – as he first told the Indian Express.

“We had come to the area to see who all were making pro-Pakistan statements. When we arrived with force, they had run away. We found out that there were three-four such people who wanted to create an issue. We had discussions with locals,” the SP said.

He repeated this same line to other media later in the day. “Boys had ‘Pakistan zindabad’ slogans so I told them to go to Pakistan”.

Is Gali ko theek kar doonga main, he tells the protestors at a Muslim-dominated locality.

However, Singh does not refer to any slogans in the 40-second video.

In the video, Singh, wearing a flak jacket, is seen accompanied by other police men and walking down to Lisari Gate, where a couple of Muslim men are seen standing.

“Kahan jaoge, is gali ko theek kar doonga (Where will they go. I will sort out this lane),” he is heard saying about protestors that they are chasing.

The officer then turns to the three men and tells them to tell the people wearing yellow and black armbands that they should “go to Pakistan”. He then warns the men that he now has an eye on the residents of this lane.

Over a thousand people have been arrested and five times more are in preventive detention as per police officers in Uttar Pradesh, India’s largest state by population. The death toll currently stands at 19.