The Real Instinct Lurking Behind the Kathua Horror

The eight-year-old child in Kathua is only an addition in the long list of those Muslim girls and women who have been raped, brutalised and killed for being Muslim. This fact should not be blurred. 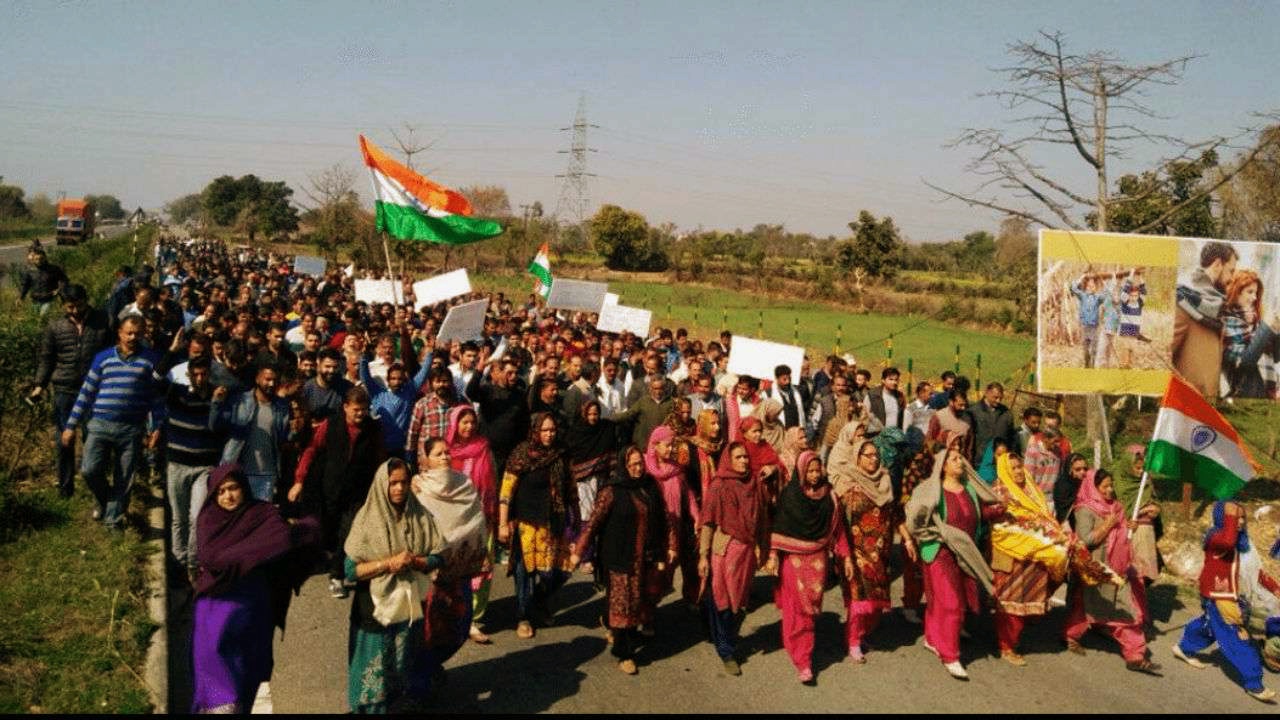 The brazen support for the criminals which was displayed on the streets of Jammu under the cover of the tri-colour should lead us to pause and question, how as a society have we reached this point? Credit: Twitter

The rapes at Unnao and Kathua have shaken most of us. And yet it needs to be said that the Kathua rape falls in an entirely different category. The abduction, brutalisation, multiple rape and finally murder of the eight-year-old girl was an act of communal or ethnic ‘cleansing’. It was done with an intent to rid Kathua of the presence of the Muslim Bakarwal community. That it was done on “behalf of the nation” was clear when we saw the tiranga being waved to cover the crime, led by people who are known as officers of the court.

Rapes of children in this country are not a rarity. We have heard of even eight-month-old babies being brutalised by men. So it is not the age of the victim alone that should shake us. Nor indeed the manner of the rape. Humans have the capacity to imagine novel depravities. Newer forms of horrors can be and have been invented and executed.

Apart from the act itself, it is the brazen and cunning support for the criminals which was displayed on the streets of Jammu under the cover of the national flag which should lead us to pause and question how as a society we have reached this point. The lawyers proved that the rapists were not alone in this ritual of the rape and murder of a little Muslim girl. I know some people will object to my describing the girl as Muslim. Let us call her a child and the rapists merely as rapists. But was she not raped and killed for being a Muslim? Was it not done to scare all the Bakarwal (Muslims) families away from Kathua?

It was the tri-colour dance on the streets of Jammu which was the most disgusting. But that should not have surprised us either. Look at the cunning calculations that lay behind what the lawyers were asking for: besides demanding the case to be transferred to the CBI from the crime branch of the police of the Jammu and Kashmir, they also demanded that Rohingyas be evicted from the area and that the policy regarding the use of tribal land be scrapped.

All three demands have a common element: demonisation of Muslims. The cleverness behind the demand of a CBI investigation cannot be missed. The crime branch of the state police had put together a coherent account of the act and was going to file a chargesheet. The idea was to block the move and allow a respite for the criminals. The CBI, being what it is nowadays, would have slowed down the investigation and would also have given an excuse for the government that a higher agency was looking into the crime, for have not we been demanding time and again for cases to be transferred from the state investigative agencies to the central body? That breathing space would then have been used to mobilise support for the perpetrators among the Hindus of Jammu.

Where did this overconfidence of ‘nationalist’ politics, displayed in Jammu, come from? How and why did lawyers, politicians and others feel emboldened to block the police from filing the chargesheet, take out a procession and give a call for a bandh? Why did they feel assured of popular support? Were they only the most vocal, articulate ones from a community the rapists and their supporters were trying to mobilise in their anti-Muslim campaign?

We have forgotten that a jhanki (tableau) lauding the hacking and murder of Mohammad Afrazul by Shambhulal Regar was taken out in a  Ramnavami procession at Jodhpur. The organisers of the procession feigned ignorance – nobody was ready to take responsibility for the bizarre aesthetic demonstration of support of a vile act. We did not ask how a tableau could be smuggled into a procession? The criminality of it was soon forgotten. We need to recall that substantial support did and does exist for the murderer Shambhulal at Rajsamand. People argue that since “love jihad” is real, what Shambhulal did has a justification, his purpose was right.

Long before the defence for the rapists and killers of Kathua and Shambhulal, Gujarat had witnessed a most macabre yatra centred around the defence of the mass murders and rapes that were part of the genocidal violence against Muslims in 2002. The then chief minister of Gujarat, Narendra Modi, had undertaken this yatra in the name of the glory of Gujarat. He asked his audience if they believed in the stories of looting and burning of houses, of children being killed and women being raped. He blasted the opposition for telling the world that Gujarat was full of looters , murdered and rapists. In his public meetings he, in his sinister style, lobbed the question before his people: Did murders take place? Did rapes take place? Did killings take place? And he coaxed the audience to deny all of it. The Hindus of Gujarat are still in denial of the rapes and murders of Muslims; and if they are truthful to themselves, they have an explanation – or even justification – for the horrific acts

We know that Kausar Bi was abducted, raped and murdered. The investigative agencies told us that this was done in the knowledge and under the watch of the then home minister of Gujarat, Amit Shah. He now leads the party which rules India, after having secured a discharge from the trial court that the CBI refused to appeal. Kausar Bi’s murder and the murder of her husband, Sohrabuddin, was justified by the then chief minister in the name of fighting terrorism.

A similar campaign of denial of violence, which included looting, destroying of properties of Muslims, murders and rapes, was witnessed in Muzaffarnagar. We see women in Kathua sitting on a dharna against the police action in the rape and murder case and we are taken back to the scenes of hordes of women coming out to prevent police from entering their villages to arrest their sons, brothers and husbands who were accused in these acts of violence. We saw the body of an accused being wrapped in the tiranga in Dadri where Akhlaq was lynched after being dragged out of his home.

How can we also forget the murderous assault by the lawyers of Delhi on Kanhaiya Kumar? Are they not brothers-in-arms of the agitating lawyers of Jammu? Before expressing its annoyance at the act of the lawyers of Jammu, the Supreme Court should have asked itself why it decided that the case of assault against Kanhaiya should not be pursued. Why did it say that let the buried be buried?

Rapes should worry us. The rape of a helpless child is most reprehensible. But more disturbing is   the fact that the perpetrators and their supporters pass off such acts as ‘nationalism’. We write off the seriousness of each act of violence against Muslims and Christians by comparing it with the enormity of the crimes committed by Hitler. But as Jairus Banaji has pointed out, there is a serial element in the episodes of such violence as all of them essentially spring from a genocidal impulse. So what we have since the recrudescence of communal violence against Muslims in 1961 is the serial impact of that impulse. We think that the incidents are isolated but we need to realise that they are merely episodes of a serial.

I see the media turning its attention to the new victims, the Bakarwals in this case. We read about their way of living and the way they think. Poems are already being written as elegies to the raped and murdered child. All this is fine and the sentiment behind it should be respected. But we need to take a hard look at ourselves. We need to shift our gaze. We need to look at the politics of rape, murder and violence against the Muslims and Christians of this country which has been legitimised by politicians through their incessant propaganda. We need to ask our pundits how they could see hope in a person who has perfected the politics of hatred against Muslims and Christians into an art and who never misses an opportunity to inject this venom in the body polity of this country. Why are we overawed by him?

The eight-year-old child in Kathua is the latest addition to the long list of girls and women – named and unnamed – who have been raped, brutalised and killed for being Muslim. This fact should not be blurred. She was not raped and killed because she was a child. The fact of the rape is important but more important than that is the politics behind this rape and murder. So it is not merely the manner and method employed to crush a fragile life that we need to discuss. That is what we see the media doing. There is a perverse pleasure in doing that. Let us not allow ourselves to be swallowed by that.

Let us not restrict ourselves to the demand of justice for the victim. She is beyond that. It is now time for the people of the country to decide how long they will remain under the spell of fake nationalists.