There is Method in the Targeted Murders of Regional Free Thinkers

English is influential, but has limited reach; regional-language journalism can make a real impact which scares communal forces 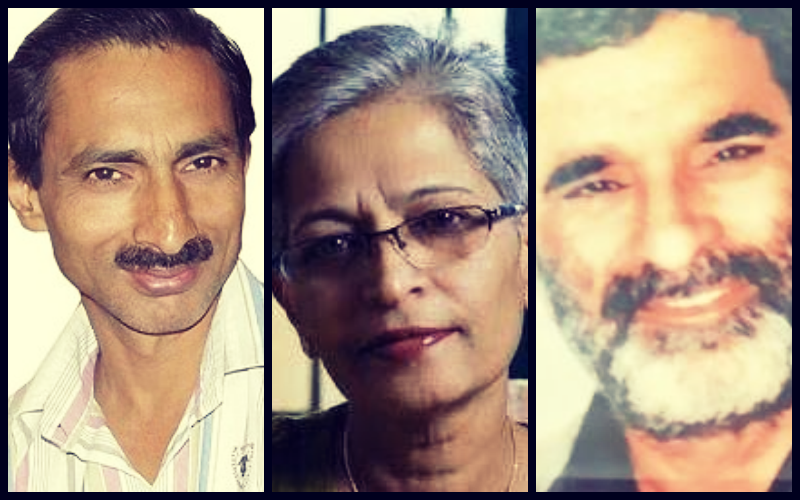 One of the abiding refrains of the Indian Right is that the ‘Left-liberal’ brigade is finding it difficult to come to terms with a changing India which is shedding its old skin and acquiring a new one. Till now, goes the argument, India was in the control of deracinated, Western types who had gained their ideas and inspiration from foreign sources and were therefore alienated from pure Indian thought. This native genius was now asserting itself and those who profited in the ancien regime were uncomfortable with a changing India.

Several terms have been coined to label this class of deracinated Indians – the original one was pseudo secular, popularised by the original progenitor of the Hindutva project, Lal Krishna Advani. Since then, the names have become more and more inventive – sickular, presstitute (since English-speaking journalists are among the pillars of the old guard), Lutyens’ media and so on. It is another matter that many of those who hurl these charges fall under the same rubric, but they have smoothly aligned themselves with new realities and profited very nicely, thank you.

The motivations of these worthies might be cynical and opportunistic (while those of the hard-boiled ideologues from the Hindutva stable may be the result of years of indoctrination), but the end purpose is the same – to show that the past was dominated – and unfairly so – by Macaulayputras (another fine invention) while the glorious future ahead will be created by the mob – defined as the humble people of the country – who are fully behind Narendra Modi, the manifestation of this Indianness.

Considering what a minority this English-speaking elite is, by their own admission, it is surprising how much it still bothers the proponents of Bharatiyata. The sniping is incessant and accompanied by the constant drum beating of the Internet warriors, human and robotic. No comment by a journalist is allowed to pass through without abuse and vilification, and often even threats. The undercurrent of resentment is difficult to miss – it is visible in the statements of not just the trolls but also the leaders, a constant flow of molten lava of bitterness and bile, stored over generations. (Conversely, there are enough from the other side carrying a kind of misplaced guilt of being ‘elitist’, thus falling into the trap laid by the Hindutvavadis.)

But while the English speaking Left-liberal angers the right-winger, what scares him is the progressive who speaks and writes in his or her own native language. The English types can be dismissed as being disconnected with the ‘real’ India; the one who spreads these ideas in Marathi, Kannada, Punjabi or any other Indian language is seen as truly dangerous.

Narendra Dhabolkar, Gobind Pansare and M.M. Kalburgi, each one killed in the last four years allegedly by extreme right organisations, were votaries of rational thought and secular tradition. They fought against superstition and the lies spread by Hindutva groups. And they all wrote and spoke in their own languages. This enabled their ideas to reach far and wide, in the villages and the hamlets, and countered the blind faith of ordinary citizens, fostered and encouraged by communal forces.

Pansare, an old time Leftist, wrote a book on Shivaji that effectively demolished the constant refrain that he was a Hindu hero who fought the Muslims, a myth that was propagated by communal forces. Dhabolkar led a lifelong struggle against fraudulent practices by sundry babas who fooled gullible people, but also was in the forefront of campaigns for equality for Dalits. His work was in Marathi. Kalburgi, a scholar who wrote in Kannada, had angered his own Lingayat community with some of his works, but also had written against superstition in Hinduism. One is also reminded of the note Punjabi poet Pash who was killed by Khalistani extremists in 1982 for his strong Leftist views.

In all cases – and there are many more – the ability of these writers and thinkers to reach a wider audience and consequently exercise more influence in the general populace made them very troublesome to their ideological enemies. The work of a Dhabolkar or a Pansare could effectively challenge the hate-mongering of rabid and communal groups among a wider audience much more than that of an English writer.

Gauri Lankesh straddled both worlds. She began as an English journalist and when circumstances warranted it, moved to Bangalore and took over her father’s old newspaper and eventually launched her own. It was named, in her father’s tradition, after herself – Gauri Lankesh Patrike. She took ownership and responsibility of the content and it reflected her own strong views on social and political issues – she leaned on the Left, championed progressive and Dalit causes, promoted young emerging leaders such as Kanhaiya Kumar, Shehla Rashid and Jignesh Mewani, and when she saw the rise of Hindutva, she warned against it. Soon, her paper and her views reached all corners of Karnataka and she became a thorn in the side of local politicians, two of whom took her to court and won a conviction against her. “They want to put me in jail,” she said and was convinced they – the people she wrote against – would get after her. A startling tweet from the head of the BJP’s IT cell seemed to gloat over her conviction and warn other journalists of the consequences of writing against the party and its leaders.

We don’t know who killed her and we hope the government finds the culprits soon, but the ones who pulled the trigger were mere foot soldiers. It is the shadowy figures behind them who have to be identified. There is no point speculating, but the context of the larger political environment in the country cannot be ignored. Whoever ordered her murder was hurt by her writing, and angered because she wrote and spoke in the language which mattered, which had real influence. English is influential, but has limited reach; regional-language journalism can make a real impact. There are scores of brave journalists from small districts and towns who have paid the ultimate price – Ram Chander Chhatrapati, whose paper Poora Sach ran an anonymous letter against convicted rapist Gurmeet Ram Rahim Singh was shot dead at point blank range; Jogendra Singh of Shahjahanpur Samachar was set on fire in 2016 for his writings. They were not from Lutyens’ Delhi.

Clearly this ‘Lutyens’ narrative is a red herring. The battle is not between the so-called English-speaking classes and the putative ‘authentic’ Indians as represented by the Hindutva politicians as well as their fellow travellers, because in the final analysis, both are privileged groups. The real struggle is between those who seek to hold onto constitutional values and to the secular and diverse character of the nation, and those who want to turn India into a monolithic Hindu rashtra where the minorities live as second-class citizens and where free thinking is forbidden. Those who stand for the latter appear to be on the ascendant, but that does not mean that there is no resistance. Killing one Dhabolkar, Pansare, Kalburgi or for that matter Gauri Lankesh will not wipe out the hundreds, and more, who will not stand for an easy takeover of India. The mobs and the murderers may think of themselves as true Indians, but they do not in any way represent the grand heritage of this country.