From Speech to Crime to Genocide, It's Clear to See How Hate Travels

Groups of killers do not formulate spontaneously, and enumeration through inflammatory public speeches have always preceded mass violence. 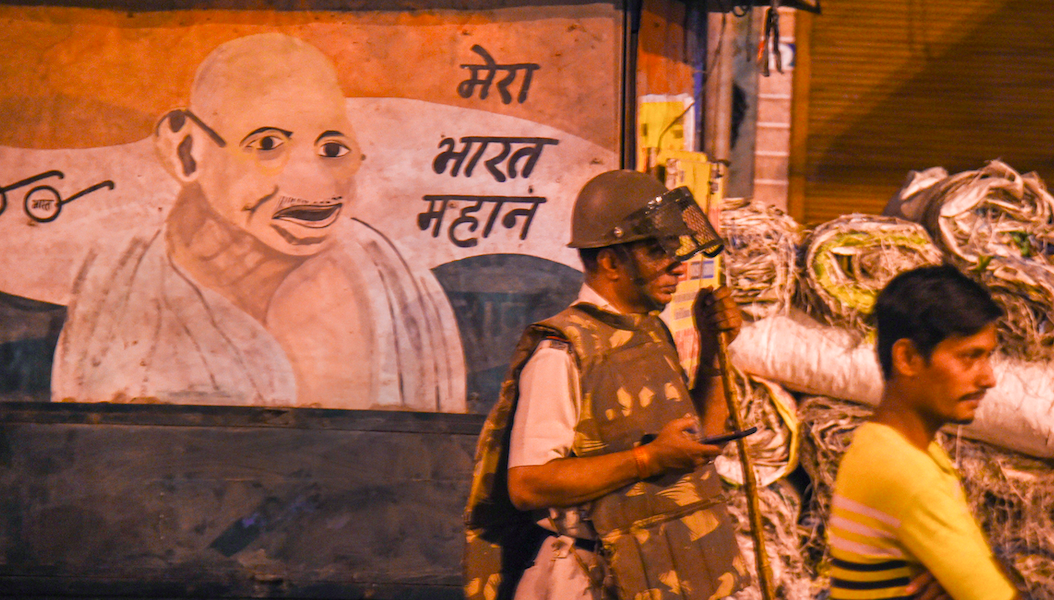 On January 30, 1939, Adolf Hitler, on the sixth anniversary of his chancellorship of Germany, delivered a speech to the Reichstag proclaiming the annihilation of ‘European Jewry’ from the earth. Two years later, mass-scale genocide had been committed by Nazis across Europe.

However, Hitler was the by-product of the very society that had for centuries targeted Jews through hate speech and hate crime which later aided the Nazis to normalise the systematic annihilation of Jews.

On January 19, 2022, Gregory Stanton, the founding president of ‘Genocide Watch’ explained in an interview with Karan Thapar for The Wire that there are noticeable signs of genocide of Muslims are in India. He said genocide need not necessarily be similar to the mass extermination of Jews; rather, it will assume the form of mob violence, slowly seeping into majoritarian consciousness.

Stanton’s words are relevant because the data reflects that in India, the situation of minorities is a cause of grave concern.

The Delhi-based socio-cultural organisation, Act Now for Harmony and Democracy (ANHAD), recently released a report on India’s rising hate speech and hate crime cases in a book Hate Grips the Nation marking 20 years of the Gujarat pogrom. It shows that anti-minority cases have been growing by an alarming rate across India, primarily against the Muslim and Christian communities. 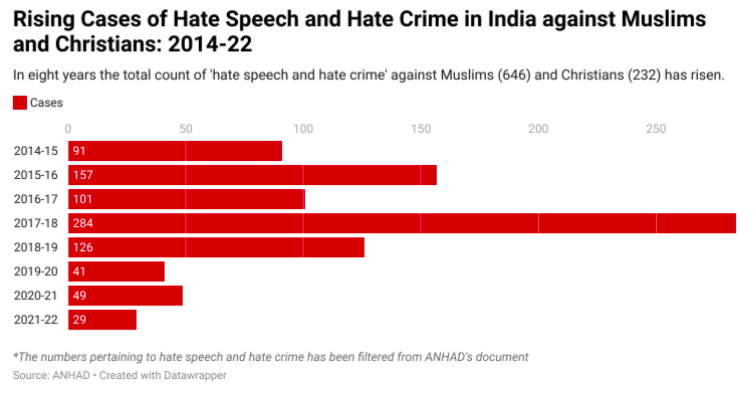 In eight years, the highest number of cases was recorded in 2017. Hindutva groups appear to be the core facilitators of hate speech and hate crime in India. Most of these groups are related to the ruling Bharatiya Janata Party (BJP), in whose tenure communal hate-mongering has sharply elevated.

In the case of the Christian community, the percentage of hate crime (96%) is higher than hate speech (4%).

How does hate-mongering shape communal violence in society?

Political theorist Hannah Arendt explains that the essential feature of hate speech is to isolate or atomise a targeted community from the public sphere; it erodes all possible means of dialogue and throws them into a systematic cycle of violence.

She has said that “hate speech victimises individuals and narrows down the public debate, which is an essential feature of a totalitarian worldview.” Due to the lack of free dialogue among equals, the fringe community transforms the victims into non-humans and enforces violence as a solution.

In February 2020, communal violence in northeast Delhi resulted in the death of 53 people, three-quarters of whom were Muslim. Even before the violence, Yati Narsinghanand Saraswati, a militant Hindutva leader, had delivered hate speeches which had the capacity to enthuse people.

An NDTV report shows that from 2014 to 2019, there has been a 500% increase in the invocation of communal hatred in speeches by politicians which subsequently led to anti-minority violence in Indian society.

It is significant to look at the growing hate speech and hate crime cases from a statewide perspective too. Figure 2 shows that in almost 26 states, hate speech and hate crime cases were recorded. Uttar Pradesh (25.2%), Delhi (14.8%), Madhya Pradesh (7.7%), and Maharashtra (6.3%) account for the highest number of cases. It is noteworthy that in most of these states, until recently, the BJP has been in power.

The map shows Muslims have been persecuted in most of the parts of India, whereas Christians have been targeted majorly in the central Indian and south Indian states. However, these figures are based upon recorded cases, and unreported cases are higher than given statistics.

The United Nations Human Rights Office in their ‘Citizens Against Hate’ report explained that in the second term of the Modi government various state governments passed anti-minority laws such as the anti-conversion law (named ironically ‘Right to Freedom of Religion’ in Karnataka) which is more commonly known as the "love jihad" law, that provided a free hand to the police and vigilante organisations to criminalise individuals belonging to the minority community.

These laws, including the controversial Citizenship (Amendment) Act and the reading down of of Article 370 in Kashmir are instances of systemic violence against minorities.

The instances of hate speech have become an everyday phenomenon under BJP’s regime, and hate crimes have been reported across various regions of India. This raises the question of whether such incidents actually help the ruling party win elections. History suggests that riots have helped political parties win elections. For instance, it was after the 2002 Gujarat riots that Modi came to power as Gujarat’s chief minister with a landslide victory, and BJP’s vote share drastically increased in the 1991 Lok Sabha elections under the backdrop of the L.K. Advani-led Ram Janmabhoomi movement.

The current data on hate crimes suggests that positive electoral gains do not necessarily stem from rising hate crimes against minorities in society.

Figure 3 shows four different pie graphs alternate to each other correlating hate crime and BJP’s vote share in two Lok Sabha elections. It is interesting to see that the BJP’s vote share has increased in the 2019 elections by 2.24% in comparison to the 2014 elections. But that does not necessarily imply that people have been voting BJP into power for communal reasons alone. People choose to vote for BJP for various reasons, and the Hindutva agenda along with hate speech and hate crimes remain a significant contributing factor, rather than becoming a significant issue in itself.

CSDS Lokniti Research scholar Shreyas Sardesai argues in his work that in the 2019 Lok Sabha elections BJP overcame caste and class hierarchies and subsumed them under a larger ‘Hindu umbrella’ that voted for BJP. Despite this larger vote consolidation, it does not conclusively prove that a larger majority has voted for the BJP government on the basis of an anti-minority sentiment. Sardesai’s perspective remains interesting as the question still remains if major anti-minority hate is not transposing into increased vote share in elections then why do instances of hate speech and hate crime keep on rising? Elections are the sum total of various factors, and ideology remains one of them. The BJP endorses Hindutva sponsored violence which needs a communal atmosphere to flourish.

On March 26, 2022, the Delhi high court, while hearing an alleged hate speech case related to February 2020 Delhi riots said that ‘if remarks are made with a smile there is no criminality in the case.’ It further said that ‘the speeches given during the election period are different than an ordinary period, and such instances that happen in ordinary times should not be taken into consideration.’ It is shocking that the premier judicial institution imparts such statements in courts. These institutions have also become neutral enablers of violence in society through such regressive verdicts.

Also read: India Is Ruled by Men Who Have Ridden to Power on Daylight Mass Murder of Muslims

The recent series of communal violence incidents across India during Ram Navami and Hanuman Jayanti celebrations are testament to the power of hate speech by BJP and Hindutva groups' prominent leaders.

It is not easy to understand this trend, particularly when hatred is performed through an agency which has power. Hate speech and its consequences are nearly similar across languages, regions and cultures. In history, there are instances where people were often referred to as "insects", "vermin" or "threats", similar to the Indian context.

Groups of killers do not formulate spontaneously, and enumeration through inflammatory public speeches have always preceded mass violence. Before the Nazis started their genocide of the Jews, German political folklore regarded Jews as less worthy and referred to them as "vermin". Tutsi people were referred to as "cockroaches" by the Hutu before the 1994 Rwanda genocide.

Irrespective of whether hate crimes benefit BJP electorally, the trend is alarming. We are nearing an unstable state. The Indian majoritarian society has hopes in the current BJP regime. At this point, it is optimistic to even hope for a better future for minorities in India.

Jayant Pankaj is an independent researcher based in Hyderabad. He works around the politics of data. Deshdeep Dhankhar is a Masters student at the Department of Political Science, University of Hyderabad. He tweets @DeshdeepDU.