Emboldened by police not opposing bail to prime accused, right-wing groups are using situation to fuel hatred; many temples, shrines now have banners barring entry of Muslims or non-Hindus.

The Hindu Yuva Vahini (Uttarakhand) appears to have mass produced this banner – which says the entry of non-Hindus is not allowed – and encouraged Hindutva activists to put them outside temples. Photo: Twitter

New Delhi: Former Delhi legislator and Congress leader Alka Lamba tweeted a video of threats by right-wing extremists after she went to meet the 12-year-old Muslim boy who was brutally assaulted last week by a Hindutva activist for entering the Shiv Shakti Dham Dasna temple in Ghaziabad to drink water. Lamba, who met the boy and his mother on Monday, later lodged a police complaint.

The temple is the headquarters of Yati Narsinghanand Saraswati, an extremist Hindutva priest associated with BJP leaders like Giriraj Singh and Kapil Mishra whose public speeches, comments and interviews openly call for or justify violence against Muslims. Narsinghanand, who kept up a steady call for violence against Muslims in the run up to the February 2020 Delhi riots, has praised Shringi Yadav, the man who assaulted the Muslim boy, and said the boy was to blame for ignoring the sign prohibiting the entry of Muslims. The boy has said he cannot read and did not know of the entry ban.

In the wake of the assault, Hindutva organisations like the Hindu Yuva Vahini – founded by Uttar Pradesh chief minister Yogi Adityanath – have taken to placing placards, banners and boards outside various shrines and temples in UP and Uttarakhand declaring that the entry of non-Hindus – or more specifically Muslims – is prohibited.

As the complaint filed by Lamba shows, the mood appears to be getting all the more belligerent with Hindutva activists openly abusing or threatening Muslims or anyone speaking against the crime.

On March 19, several Hindu groups also held demonstrations in the area where slogans were raised against Muslims. The call was backed by Sudarshan TV, which called on its viewers to assemble at the Dasna Devi temple “to save the temple from jihadis”. There are reports of another demonstration held there on March 21, despite the imposition of Section 144, prohibiting the assembly of more than four people. Later, some of the Hindutva activists also took to social media to proclaim their support for Shringi Yadav’s actions.

The quick release from custody of Yadav, who was only booked on bailable charges – Sections 323 and 505 of the Indian Penal Code and some sections of the Information Technology Act –  appears to have emboldened such elements.

Yadav not only assaulted the boy but also recorded the beating. In the video, which went viral, Yadav is  seen asking the boy why he entered the temple premises, and when the boy replied that he had only come to drink water, he began assaulting him and accused him of being a thief. Yadav declared later that he also hit the boy in his genitals to ensure he would not be able produce children later.

The Uttar Pradesh Police did not invoke harsher IPC sections which it could have, considering the nature of the assault. It also did not oppose Yadav’s bail, leading to the release of the prime accused.

Upon his release, Yadav has also taken to giving ‘interviews’ in which he claims he was only trying to stop the child from ‘defiling’ the sanctity of the temple by deliberately urinating on a Shivling. In this regard, several Hindutva activists and media organisations have also taken to circulating a three-year-old video (from April 2018) of an incident in which a boy had allegedly urinated in a Hindu place of worship in Visakhapatnam district of Andhra Pradesh.

Though fact-checks have clearly established the provenance of the video, this has not restrained the Hindutva groups from circulating the claim that the video was shot at the Dasna temple. Several Youtube and even TV channels have also been running this false claim.

Many temples, shrines have now put up signs banning the entry of Muslims, non-Hindus

Ever since, the situation has only turned more alarming. Many more Hindutva groups have joined in the show of strength and taken to erecting banners at other temples and shrines warning Muslims and non-Hindus not to enter the premises.

At the Dasna temple the earlier sign has been replaced with a larger poster. 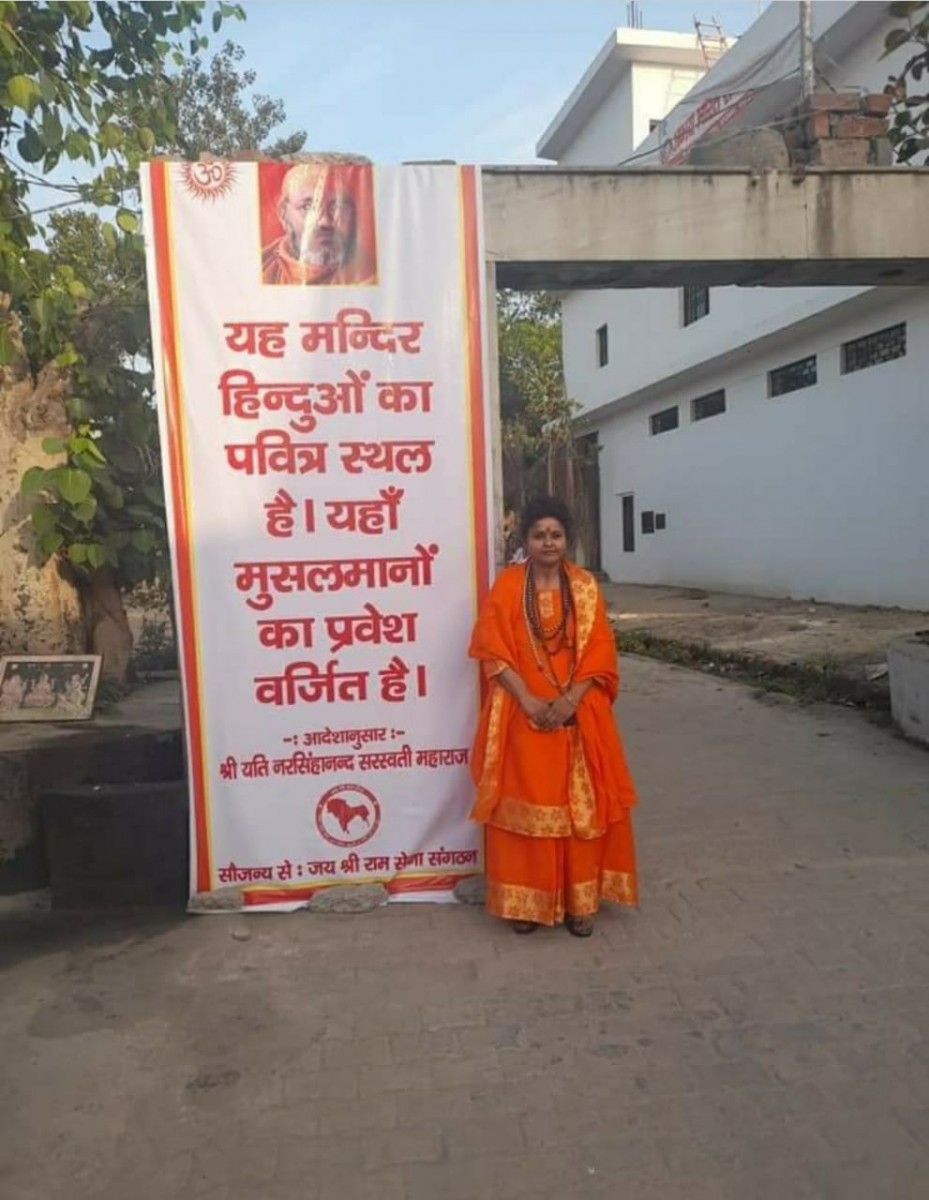 Poster prohibiting the entry of Muslims at the Dasna Devi temple in Ghaziabad. Photo: Twitter

Sponsored by the  ‘Jai Shri Ram Sena Sangathan’ and erected up by the order of Yati Narsinghanand Saraswati, it reads: “This is a holy shrine of the Hindus. Entry of Muslims is prohibited.”