An advertisement issued by the hospital had said that most of the COVID-19 patients in Meerut are Muslims linked to the Tablighi Jamaat gathering in New Delhi. 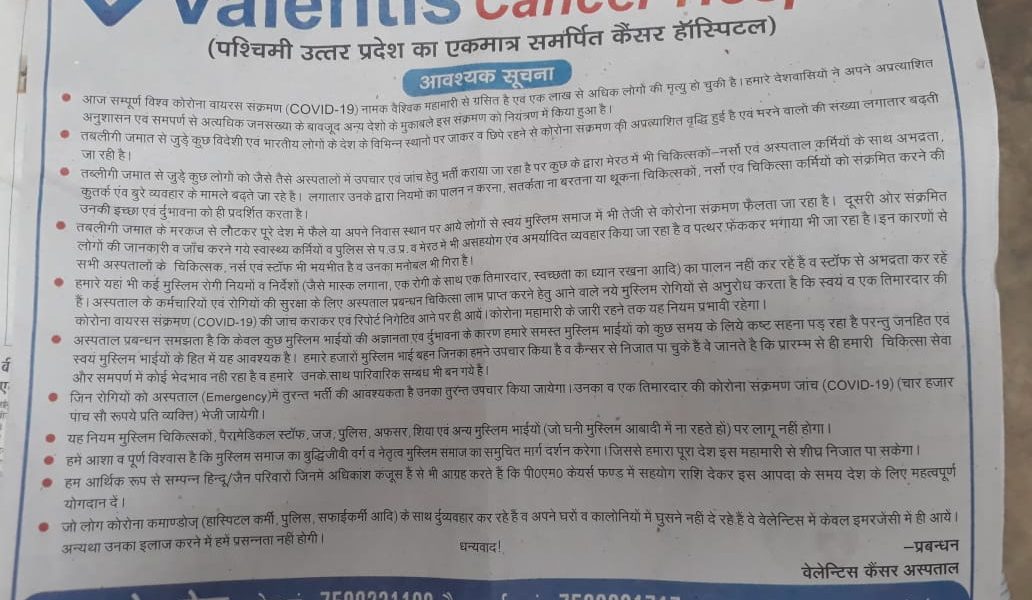 Advertisement placed in the Meerut edition of Dainik Jagran by the Valentis Cancer Hospital, Meerut, on Friday, April 17, 2020.

New Delhi: The Uttar Pradesh police has filed an FIR against the owner of the Valentis Cancer Hospital in Meerut, Amit Jain, after he issued an advertisement in the Meerut edition of Dainik Jagran barring Muslim patients from the hospital unless they are tested for COVID-19 and the result is negative.

Now, Jain has been booked under Sections 188 (disobedience to order duly promulgated by public servant), 295 (insult to religion) and 505-3 (statements to incite a community) of the Indian Penal Code.

“For the security of hospital’s staff and patients, the hospital administration requests all new Muslim patients that they and one designated caretaker get tested for COVID-19 and visit the hospital only if their reports are negative,” a part of the advertisement issued by the Valentis Cancer Hospital read.

Jain claimed that the number of COVID-19 patients in India – and Meerut – has grown ‘unexpectedly’ due to the Tablighi Jamaat event and the infection has spread only in Muslim-dominated areas in Meerut.

The next day, the hospital issued a clarification in Dainik Jagran and apologised to Hindus and Jains ‘for hurting their sentiments’. “It has come to our notice that some people of the Hindu and Jain faith have been hurt due to our notice yesterday. A wrong message has gone and we regret it and ask for forgiveness.”

The hospital did not, however, apologies or regret its discriminatory policy towards Muslim patients, which is in violation of the National Human Rights Commission’s charter of patients right which has also been adopted by the Ministry of Health and Family Welfare. According to the charter, a patient cannot be denied treatment based on his/her religion or illness.

Initially, the Inchauli police station did not deem it necessary to act on the matter. “They have not said that Muslims will not be allowed. The only objectionable part was the part about Hindus and Jain being miserly. And they have apologised for that. So it doesn’t look like any action is needed at the level of the police station. But even then we are looking into it today and if any action needs to be taken we will do so,” Brijesh Kumar Singh, station house officer of the Inchauli police station, told The Wire on Sunday morning.

The Meerut police acted and filed the FIR after this.